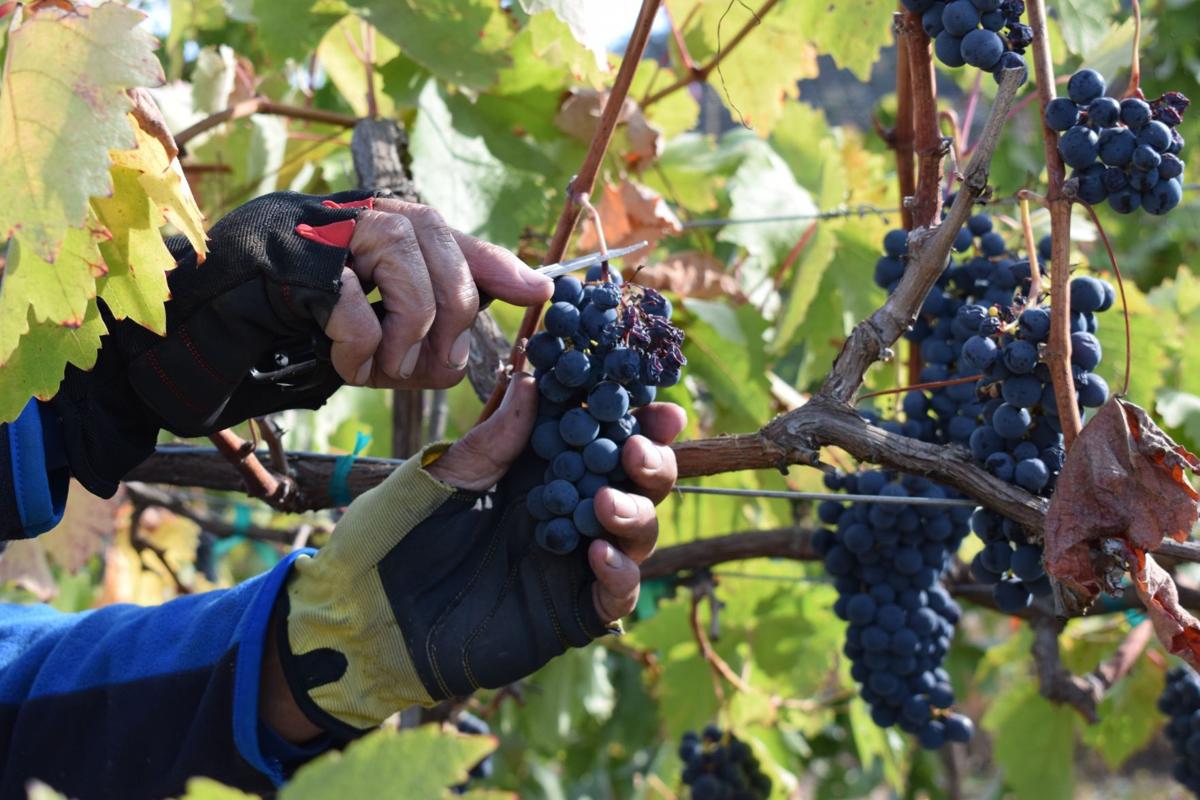 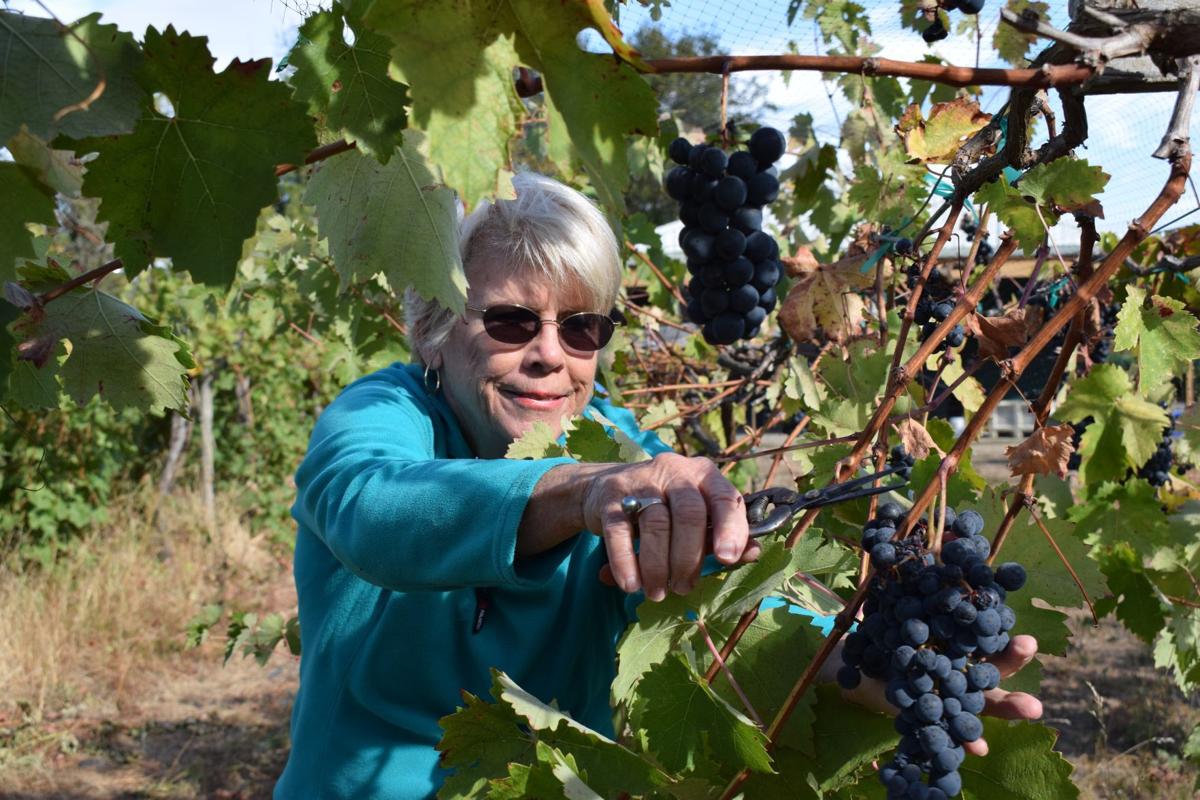 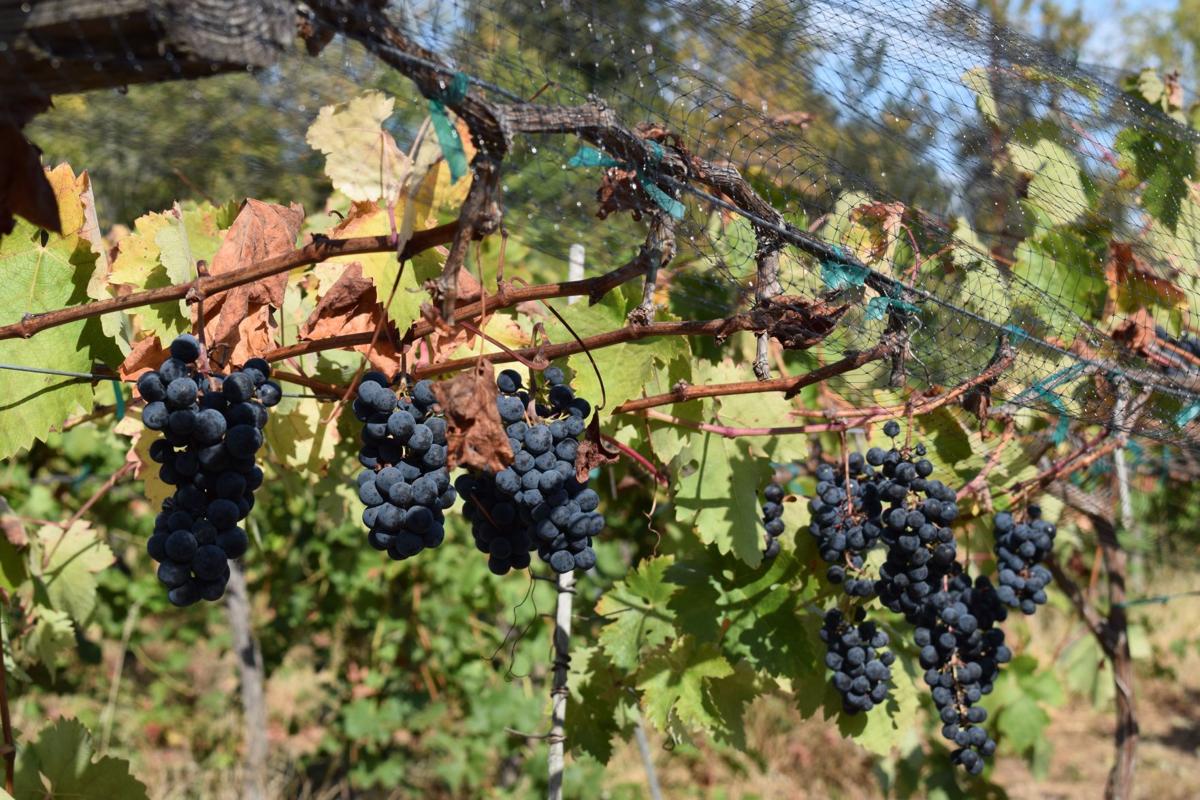 The wine grape harvest season is underway in the Umpqua Valley. 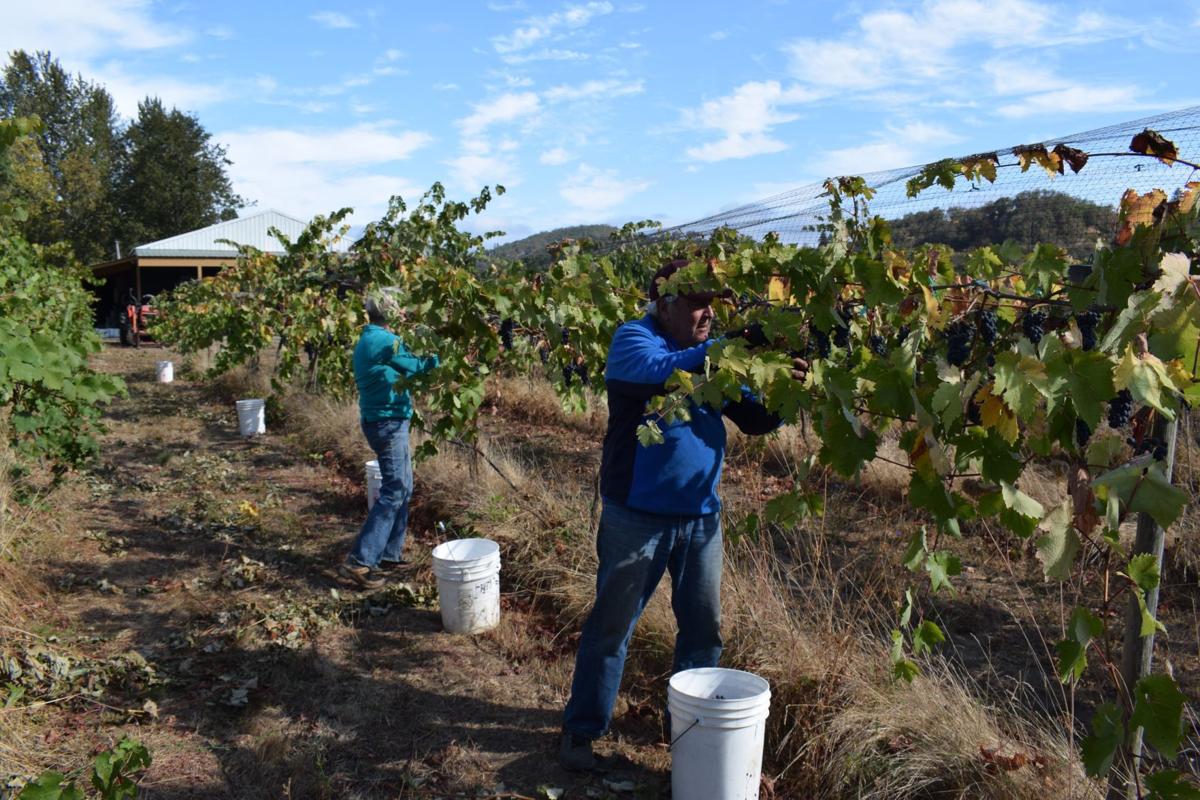 Pam and Mike Freed harvest Tempranillo grapes on their vineyard on Sept. 29.

Mike Freed harvests Tempranillo grapes at the end of September. 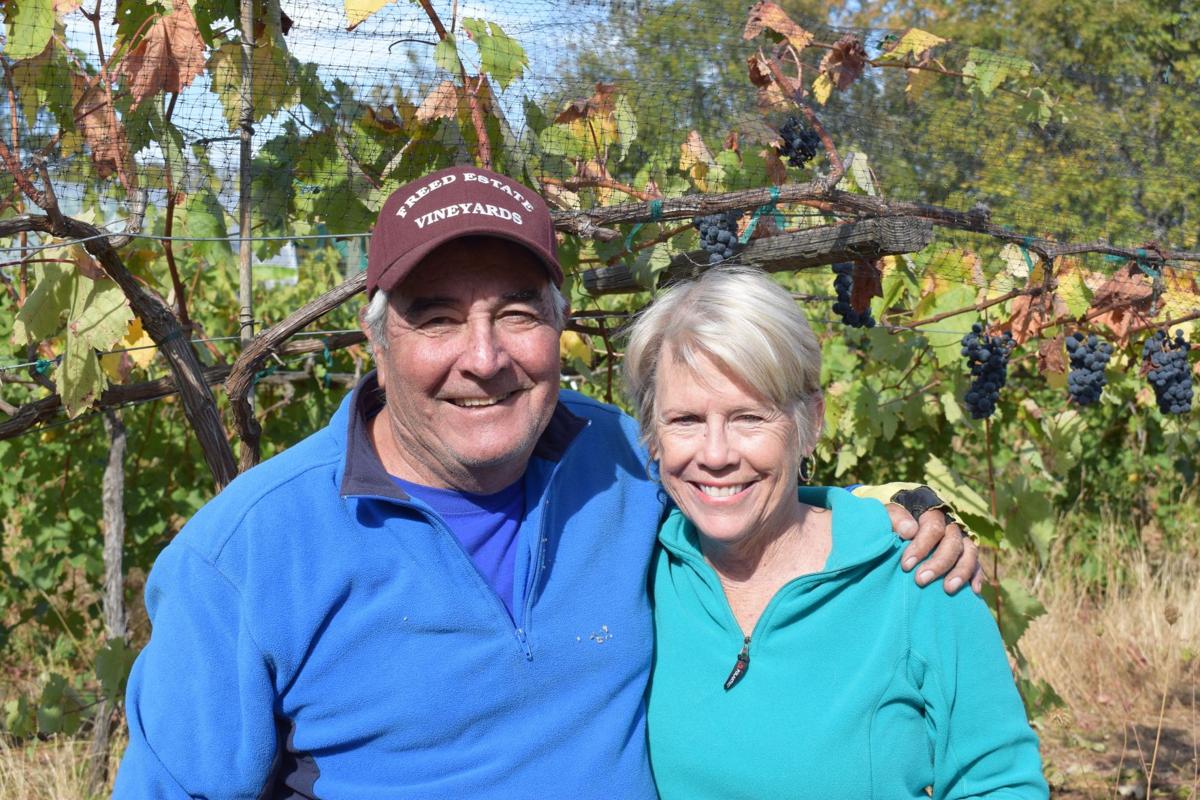 Mike and Pam Freed, owners of Freed Estate Winery in Winston, are busy harvesting their wine grapes this season.

The wine grape harvest season is underway in the Umpqua Valley.

Pam and Mike Freed harvest Tempranillo grapes on their vineyard on Sept. 29.

Mike Freed harvests Tempranillo grapes at the end of September.

Mike and Pam Freed, owners of Freed Estate Winery in Winston, are busy harvesting their wine grapes this season.

Harvest is underway for wine grape growers in the Umpqua Valley, many of whom have been picking their grapes earlier than usual.

Mike and Pam Freed, owners of Freed Estate Winery in Winston, grow 12 acres of Tempranillo, Syrah, Cabernet Sauvignon, Viognier and Merlot grapes along the South Umpqua River. Originally from Hawaii, the Freeds planted their first grapes in 2000, and all Freed Estate wines are made from grapes grown on their own vineyard.

The tasting room opened three years ago and features local paintings, wood work and ceramics, as well as jewelry made by the Freed’s youngest son and manager of the vineyard, Bryan Freed. An art enthusiast, Pam Freed painted the watercolor label on the wine bottles.

This season, the Freeds began picking their Viognier and Tempranillo grapes during the last week of September, and the majority of the grapes are expected to be ready for harvest by mid-October.

“The tonnage is about normal so far,” Mike Freed said. “It’s been a good growing season.”

Mike Freed said this year’s Viognier grapes were picked two weeks earlier than last year, but the timing is consistent with 2013 and 2014.

The Freeds measure the sugar content in a wine grape by degrees brix in order to know when the grapes are ripe for picking.

Though it varies per grape, 24 degrees brix is usually considered to be ripe, and the grapes go up about one degree brix per week during sunny days.

“Once a week, we do a test and randomly pick so many grapes and test the sugar, pH and acids,” Pam Freed said.

“Another indicator that the grapes are ripe is when the birds start coming in droves,” Mike Freed added.

Freed Estate uses multiple methods of deterring the birds from getting to the harvest before they do. Netting, shimmering bird tape, bird cannons and recordings of loud hawk screeches are some ways to scare off the birds.

Once the grapes are ready, the Freeds clip the bunches of grapes, load them into buckets and transport them into a large bin where they sort out the leaves.

The Freeds encourage wine enthusiasts to sample the fruits of their labor.

“Come by for a taste,” Mike Freed said.

Becker Vineyard in Roseburg is another estate grown vineyard in the Umpqua Valley that planted its first grapes in 2000. Owner Charlie Becker started by selling the grapes to other local wineries before he opened the tasting room and began selling wine in 2008.

This season, Becker started picking his Marechal Foch grapes on Aug. 15 and said by now the harvest of his 10 varieties is coming to a close.

“We’re definitely a little early this year, not incredibly early. I think most of the vineyard owners would agree that the season is just about over with. They’re going to be struggling to get the last of their grapes in,” Becker said.

He will continue to harvest early this week, and the last variety to be picked is Grenache.

For Rod and Nina Pace, owners of Anindor Vineyards in Elkton, this has been a banner year for harvesting in terms of climate. Anindor, a name which includes both the owners’ names spelled backwards, harvested about 40 tons of its estate fruit this season, averaging almost three tons per acre.

“This year was the earliest harvest we’ve done at the vineyard,” Pace said. Harvest began on Sept. 1 and finished by the end of the month. Until 2013, harvest had begun in October for Anindor, but the last three years have been experiencing earlier harvests.

Pace said the warm spring and dry summer contributed to the quality of his grape varieties, Pinot goir, Pinot gris, Gewürztraminer, Riesling and Baco noir. A hot August caused the grapes to ripen quickly, which Pace said was good because they were able to harvest before the rainy season.

From the 13-acre vineyard at Anindor, the grapes are made into wine at Brandborg Winery in Elkton.

“This is going to be one of the best years for Oregon Pinot and people should really be looking forward to the release of it next year,” Pace said.

Greg Jones, a climatologist of 25 years and son of Abacela owners Earl and Hilda Jones, is a professor at Southern Oregon University who researches how climate affects wine grapes in Oregon and worldwide.

“The region has the tendency to be able to ripen quite a few different varieties very well because it doesn’t have any extremes,” Jones said.

Looking at the range of climates available for wine grape growing, Jones said the Umpqua Valley is the “sweet spot or Goldilocks type area” because it’s not too hot or too cold, and it’s not prone to extreme weather.

“This vintage looks pretty good and I think wine growers are going to end up being happy about it,” Jones said.

This is the fourth consecutive warm vintage the Umpqua Valley has had, with good growth cycles and little pressure from pests and diseases.

“The vines showed what was happening because they were very early in terms of their growth cycles, and harvest was very early this year,” he said. “People are very close to being finished, and typically the harvest goes way into the middle or late October.”

Hanging up the clippers after 36 years