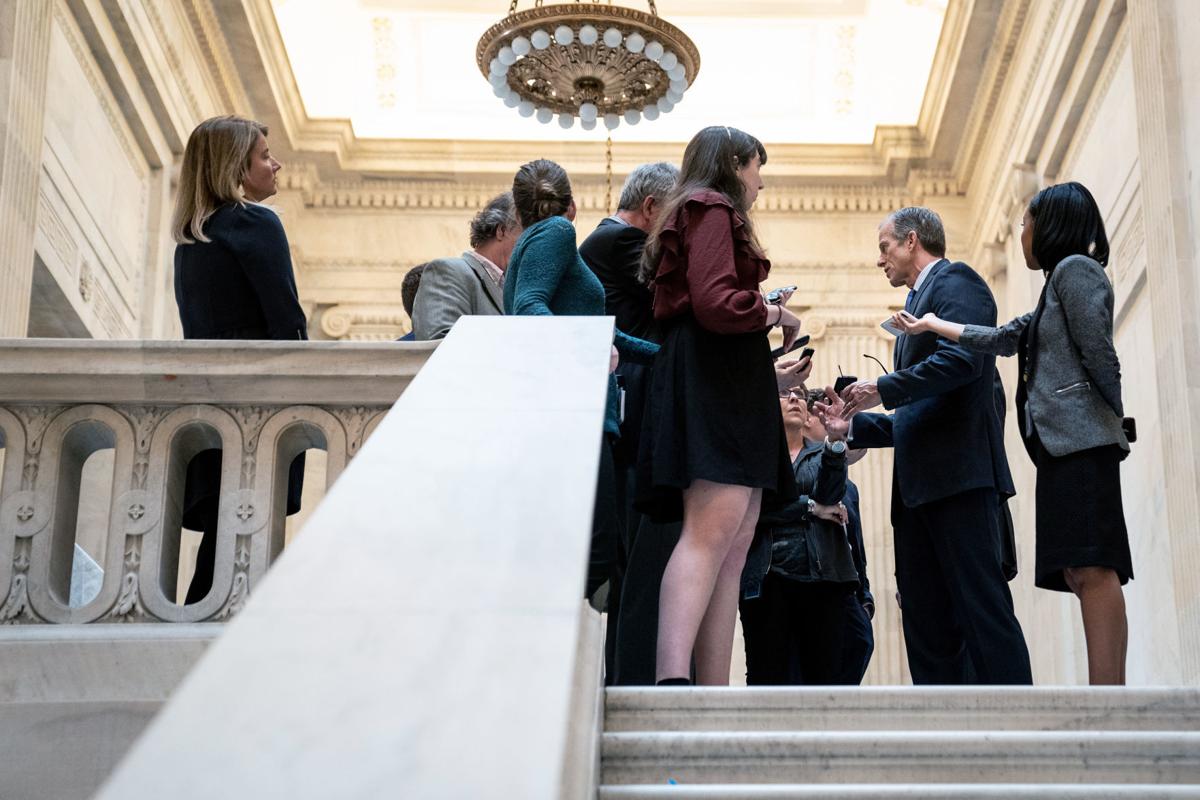 Sen. John Thune (R-S.D.) speaks to reporters on Capitol Hill on Wednesday. Thune has pushed for a fitness tax break for years. 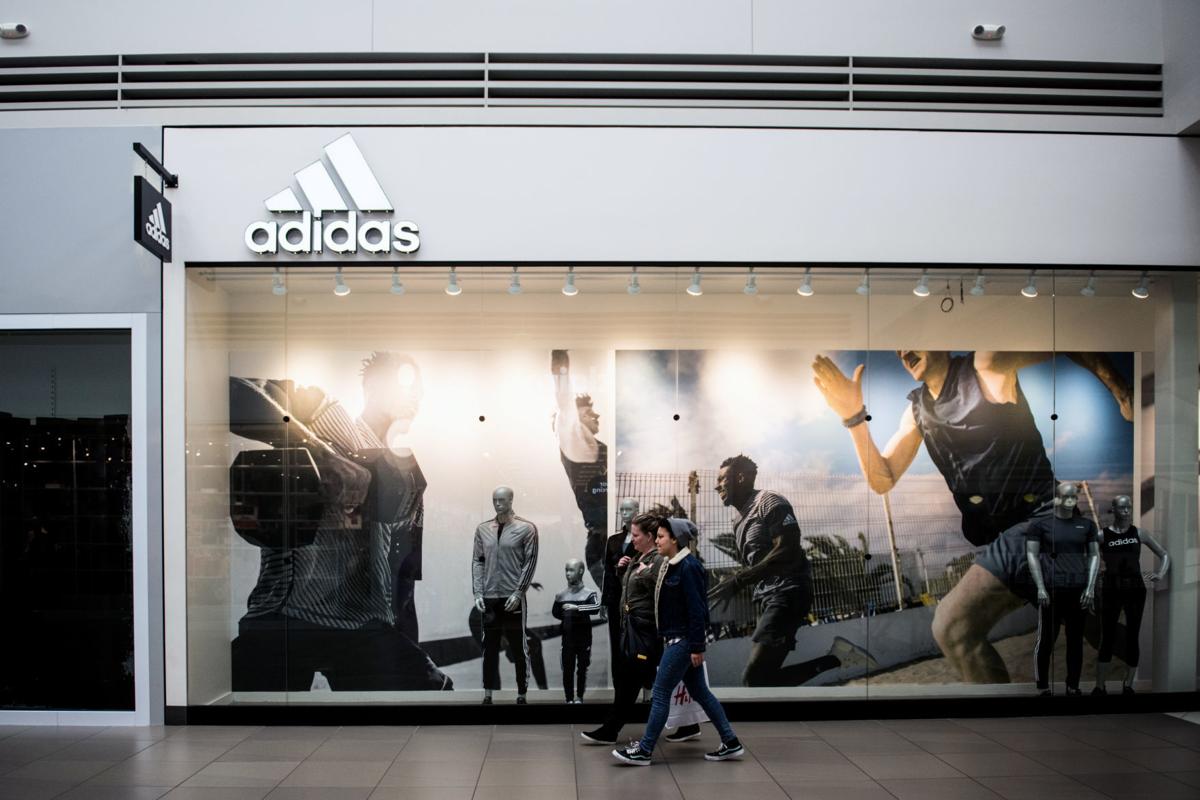 FILE — An Adidas store in Auburn, Wash., on April 7, 2019. Adidas is seeking support for a long-sought provision allowing people to use pretax money to pay for gym memberships and fitness equipment — despite the mandatory closure of fitness facilities in many jurisdictions during the coonavirus outbreak. (Chona Kasinger/The New York Times) 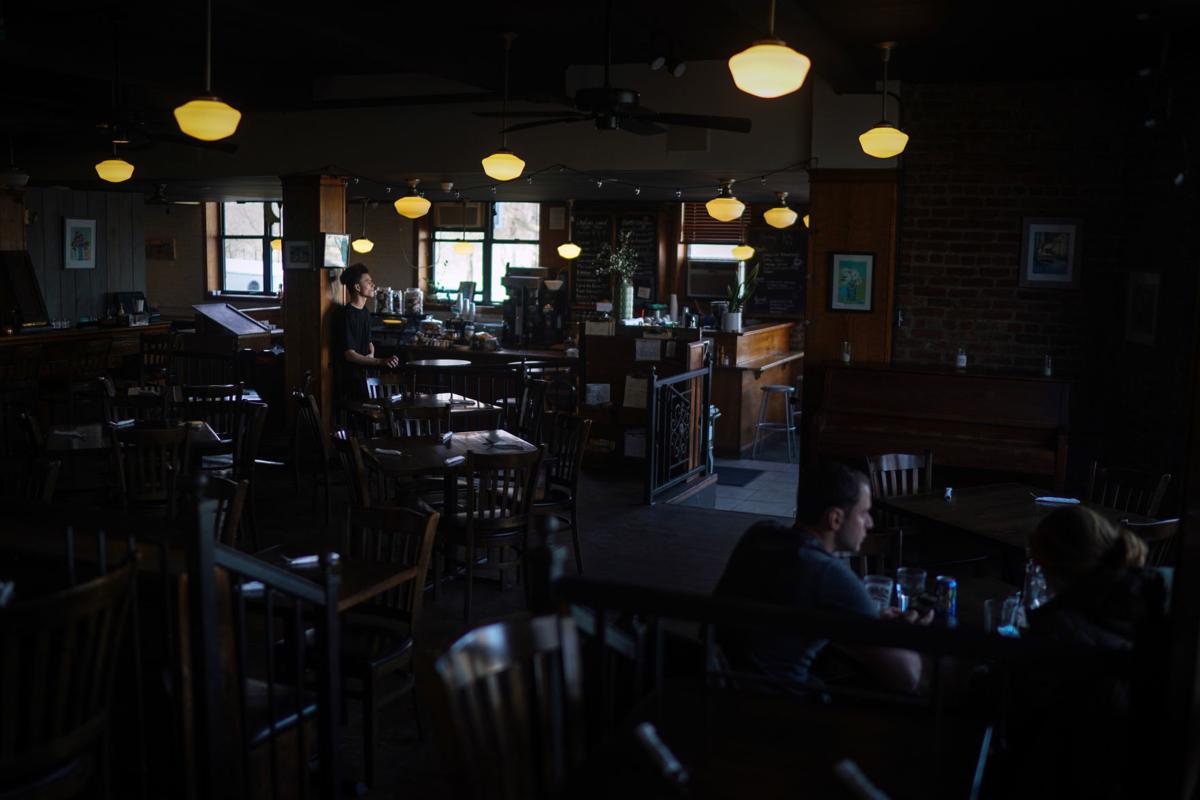 Sen. John Thune (R-S.D.) speaks to reporters on Capitol Hill on Wednesday. Thune has pushed for a fitness tax break for years.

FILE — An Adidas store in Auburn, Wash., on April 7, 2019. Adidas is seeking support for a long-sought provision allowing people to use pretax money to pay for gym memberships and fitness equipment — despite the mandatory closure of fitness facilities in many jurisdictions during the coonavirus outbreak. (Chona Kasinger/The New York Times)

WASHINGTON — Restaurants say they need $325 billion in federal assistance. Boeing wants $60 billion. The travel industry has requested $250 billion, and manufacturers are seeking $1.4 trillion in loans to deal with the economic devastation being wrought by the coronavirus.

And that’s to say nothing of the casinos, airlines and franchise owners, all of whom have signaled that they, too, will need relief from the federal government to survive.

Then there are the industries and companies that do not immediately come to mind as front-line casualties but are nonetheless lobbying for their causes to be addressed as Congress prepares to allocate $1 trillion or more in response to the crisis.

The prospect of a bailout of a scale without precedent has set off a rush to the fiscal trough, with businesses enduring undeniable dislocation jostling with more opportunistic interests to ensure they get a share.

Sportswear company Adidas is seeking support for a long-sought provision allowing people to use pretax money to pay for gym memberships and fitness equipment — despite the mandatory closure of fitness facilities in many jurisdictions during the outbreak.

Drone-makers are urging the Trump administration to grant waivers they have been seeking that would allow them to be used more widely — including to deliver medical supplies or food without risking human contact that could spread the virus.

Movers are requesting $187 million in assistance to make up for revenue lost as a result of a Defense Department order halting moves, while Airbnb is asking Congress to give tax breaks and access to small business loans to people who lost income from a decline in home rentals.

Then there are the pig farmers. They are citing the coronavirus in renewing their call for the federal government to expedite foreign worker visas, with an executive at the National Pork Producers Council noting in an email: “many Americans have experienced empty meat cases in recent days, as we adapt to the surge in demand.”

While the halls of the Capitol are eerily quiet, lobbyists are burning up the phone lines and flooding email inboxes trying to capitalize on the stimulus bills moving quickly through Congress. President Donald Trump has already signed into law a coronavirus relief package including funds to provide sick leave, unemployment benefits, free coronavirus testing, and food and medical aid to people affected by the pandemic.

Negotiations over a new bill, which had been estimated to cost $1 trillion, kicked off in earnest Thursday night. Senate Republicans unveiled legislation that included $58 billion in loans and loan guarantees for passenger airlines and cargo carriers, $150 billion for unspecified “eligible businesses” and $300 billion for small-business loans as well as direct cash payments to many Americans. Democrats in the House and Senate will have their own proposals.

The conditions for a lobbying blitz are ideal. Concerns about costs and deficit spending largely have been moved to the back burner. The process is being rushed, with legislation being written in private and rushed toward votes without much scrutiny of the fine print. Both parties are under intense pressure to deliver for key constituencies.

“The only industry that hasn’t been slowed down by the virus is the lobbying industry,” said Rep. Ro Khanna, D-Calif.

In an interview, Khanna said lobbyists have been “inundating people on the Hill with emails, calls and texts.”

“It really provides a lens into the part of Washington that most Americans despise,” he continued, “particularly at this time of national crisis.”

Some congressional aides have privately likened the lobbying blitz around the stimulus legislation to a gold rush.

Americans For Prosperity, the conservative group funded by the Koch brothers’ political network, warned lawmakers Thursday to “not exploit this crisis to push their own special interests’ policy agendas” or “to bail out shareholders or to reward favored industries.”

Craig Holman, a lobbyist for liberal-leaning government watchdog group Public Citizen, argued that many of the industries to which the Trump administration has expressed a willingness to extend assistance — including airlines, cruise lines and hotels — do not need or deserve the help.

“These industries already have access to cash reserves from their wealthy investors,” Holman said, arguing that large corporations “have a very poor track record when it comes to spending bailout funds, using much of the money to preserve profits for shareholders, stock buybacks and hanging on to reserves.”

His group is backing Democratic proposals to enact conditions on bailout funds for major corporations, similar to those supported by Khanna, including prohibiting their use for executive compensation and stock buybacks.

Lobbyists and trade groups recognize the possibility of a backlash, “but it doesn’t seem to have stopped the frenzy,” said Dave Oxner, a lobbyist with the firm Cogent Strategies who is assisting clients navigating the coronavirus crisis.

Oxner helped write the 2008 bailout legislation as a top staff member for the House Financial Services Committee, then became a lobbyist for a trade group representing the finance industry as it struggled to deal with the criticism and loss of public trust that lingered after the bailouts.

“So for those looking for relief amid current crisis conditions, it is important to remember that words like ‘temporary,’ ‘targeted,’ ‘need-based’ and ‘forbearance’ can very quickly turn into a ‘bailout’ in the mind of those Americans who don’t perceive a direct benefit,” he wrote in a blog post this week warning lobbyists and industry groups to proceed cautiously.

He noted in the post that “some of the requests for aid appear opportunistic on their face, while others seem truly desperate.”

And, in an interview, he predicted, “years from now, there could be a reckoning.”

Some lobbyists are proceeding, even as they acknowledge the risks.

“I don’t want to sound tone deaf,” an Adidas lobbyist wrote in an email Thursday to congressional staff seeking support for the fitness tax break, which has been pushed for years by a bipartisan group of lawmakers including Sen. John Thune, R-S.D., and which could benefit Adidas and its subsidiary Reebok.

The lobbyist, Ray Bucheger, a partner at FBB Federal Relations, added that he was nonetheless “being told that Senator Thune is looking to include this in an emergency stimulus bill. I am emailing to 1) reinforce Reebok/adidas support; and 2) to ask: have you heard from anyone else on this?”

Congressional analysts have previously estimated the proposed tax break would cost the government about $3.5 billion in lost tax revenue over 10 years.

Gregory Walden, an official with the drone industry trade association, the Small UAV Coalition, did not entirely dismiss the idea that his group was being opportunistic in calling on the Trump administration to waive the regulations it opposes. The change, he said, would assist with the response to the coronavirus outbreak.

“If you’re opportunistic in helping people, that’s the right kind of opportunism,” said Walden, a former chief counsel of the Federal Aviation Administration.

But Sean Kennedy, an executive at the National Restaurant Association, said the flurry of lobbying in recent weeks has complicated the efforts of groups like his seeking Washington’s support to prop up struggling industries. Many restaurant owners, facing lengthy closures, are laying off their staffs and are fearful of their survival if the crisis goes on for an extended period.

“The challenge for us is that there are people who are using this crisis as a way to revisit past legislative battles that have nothing to do with coronavirus or the people suffering from it,” Kennedy said. “It’s offensive to the American people.”

He said more than 40 state governments have ordered restaurants to be closed or drastically limited in service, which could lead to the elimination of 5 million to 7 million jobs over the next three months. The $325 billion in assistance his group is seeking includes $145 billion to help cover operations and pay employees.

“Our goal is not to profit — our goal is simply to survive,” Kennedy said, dismissing the potential of an anti-bailout backlash.

Likewise, Matt Haller, an executive at the International Franchise Association, which represents franchise businesses, said “there will always be backlash, but we hope that most people will agree about the need to keep businesses afloat and workers on the payroll.”

His association is asking Washington for $300 billion in loans and other assistance.

“We are literally talking about hundreds of thousands of small franchise businesses — from gyms to day care centers to restaurants and hotels — all without customers, who need capital now in order to protect the greater public health,” Haller said.

There is a key distinction between most of the industries seeking help from Washington now and the banks that received bailouts during the 2008 financial crisis, said Tori Emerson Barnes, an executive at the U.S. Travel Association.

“This is an unforeseeable natural disaster, national disaster,” she said. “We’re not talking about people that have been acting badly.”

As such, she suggested she does not believe it is warranted for the federal government to demand seats on the boards of most large companies that might receive assistance in the stimulus measures being debated in Washington.

Her group is requesting $250 billion in assistance for its member hotels, museums, tour companies and other travel entities.

“I don’t know at the end of the day if it will be enough,” she said. “People can’t shy away from, or be afraid of, a big number because the entire economy is halted, so we need to do something to stabilize and to keep things moving until we can physically move again.”