Check your email for details.

Submitting this form below will send a message to your email with a link to change your password.

An email message containing instructions on how to reset your password has been sent to the e-mail address listed on your account.

Your purchase was successful, and you are now logged in.

A receipt was sent to your email. 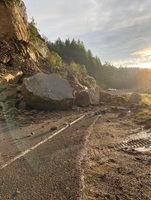 An estimated 7,000 cubic yards of rock and debris fell onto Highway 138 West in the Kellogg area Friday morning. The highway is closed in both directions, with a local detour for passenger vehicles. The Oregon Department of Transportation estimated that clean-up of the slide could keep the highway closed until late Friday or early Saturday.

A massive rockslide has forced the closure of Highway 138 West between the Yellow Creek recreation area and Tyee on Friday morning.

Oregon Department of Transportation spokesperson Dan Latham said that crews were attempting to clear an estimated 7,000 cubic yards of debris which is blocking both lanes of the highway. The original estimation of debris was between 500-800 cubic yards.

The slide was first reported shortly after 6 a.m., and cleanup is expected to last most of the day Friday.

The slide occurred in the area of milepost 11, just south of the Yellow Creek day-use area and boat launch near Kellogg. A local detour is in place for private vehicles, but it was unclear the plan for a detour for commercial vehicles already in the area of the slide. Commercial and recreational vehicles are advised to use alternate routes.

Jessica Jackson, of Winston, helps hold a large flag during the Veterans Day Parade in downtown Roseburg on Thursday.

Participants wave as the Veterans Day Parade passes through downtown Roseburg on Thursday.

Army veteran Dawnetta Loomis waves as she participates in the Veterans Day Parade as it rolls through downtown Roseburg on Thursday.

A color guard makes it’s way through downtown Roseburg as part of the Veterans Day Parade on Thursday.

A color guard makes its way through downtown Roseburg at the head of the Veterans Day Parade on Thursday.

A pair of four-legged friends with the Douglas County 4-H Dogs group walk in the Veterans Day Parade in downtown Roseburg on Thursday.

Members of the Vietnam Veterans of America Umpqua Chapter wave as they participate in the Veterans Day Parade on Thursday in Roseburg.

Visitors look on as the Veterans Day Parade passes through downtown Roseburg on Thursday.

Nora Bollingberg, 2, participates in the Veterans Day parade in Roseburg as her mom reaches out to her while holding on to a giant American flag on Thursday.

Southeast Jackson Street was packed Thursday for the return of the Douglas County Veterans Day Parade after a one-year hiatus due to the COVID-19 pandemic.

Lonnie Shields, of Winston, served in the Air Force from 1965 to 1970. He carried an American flag in the parade as part of the Vietnam Veterans of America Chapter 805 color guard. He is a member of the honor guard that provides final honors for veterans who have died.

Shields served as a jet engine technician and flew B-52s over Vietnam during the Vietnam War.

He said he loves participating in the parade.

“It’s very rewarding. I am so impressed with how many people are patriotic and show up for this parade,” he said. “It’s overwhelming.”

Rodney and Sandy Beach were in the parade along with their 1970 Chevrolet Monte Carlo. The car is covered with the words U.S. Marines and also contains names as tributes for veterans and police officers who died during their service.

Rodney Beach served as an active duty Marine during the Vietnam War and then joined the Marine Reserves. In all, he served more than 26 years. He is also a retired Oregon State Police officer and was accompanied by OSP officers during the parade.

Rodney Beach said the car started as a project in his shop. He got the speed racing bug after driving a 1968 Camaro at Bonneville Salt Flats in 2014 and 2018.

So he started building the Monte Carlo to go faster than the current speed record.

The Beaches are raising money for veterans through donations to Spirit Mountain Casino Veterans Committee. The money is used to help any Oregon veterans in need of something they can’t afford, whether a walk-in tub, a ramp or a new roof. (More information about that project is available at saltysgtmjr.com.)

Earnest Flood, of Roseburg, rode his scooter in the parade, accompanied by his dog Foxy Lady.

Flood is a veteran of the Army Green Berets who served in Cambodia and Laos in the 1960s.

He said the turnout was “fantastic.”

“I love it. It means a lot. We get to honor all our veterans,” he said.

It was the first time she’d been in the parade.

Cook entered the Army after World War II broke out because her father had no sons and she wanted to make him happy.

She was the first woman to enlist in Allegan County, Michigan. She served as a secretary at Fort Benning, Georgia, and at Fort Oglethorpe, Georgia. She applied for overseas service twice but wasn’t allowed to go.

Connie Kloha, community relations director at Bridgewood Rivers, where Cook lives, helped arrange for her to be in the parade. She said Wednesday that Cook would be “the belle of the parade.”

Janet Parrott, of Roseburg, was one of the many patriotic parade-goers. She said she missed the parade when it wasn’t held last year.

“It always makes me proud to come out and just enjoy looking at the other veterans and enjoy people who are celebrating them,” she said.

Parrott’s father is a veteran who served in the Air Force in Vietnam.

He lives in Florida, but she likes to call him during the parade and say, “How’s my favorite veteran?” she said.

“Everybody comes out to support our veterans. You don’t find that in just every city,” she said.