A corporal with the Roseburg Police Department has been returned to active duty after a grand jury found his shooting of a suspect on the evening of Sept. 9 was justified.

The Douglas County District Attorney’s Office announced Wednesday that the shooting, involving Cpl. Pat Moore and suspect John Paul Kliestik, 39, “was a lawful and justified use of force in order to protect civilian and officer lives.”

The shooting stemmed from the incident at 1361 SE Magnolia St. when Kliestik is alleged to have started a number of fires inside his parents’ home, including one on the top of a propane tank. As officers attempted to enter the home, Kliestik reportedly threw a television down a staircase, striking one of the officers in the arm. That was when Moore fired at Kliestik, striking him in the leg.

After arraignment in Douglas County Circuit Court on Sept. 13, Kliestik’s bail was set at $1.5 million. 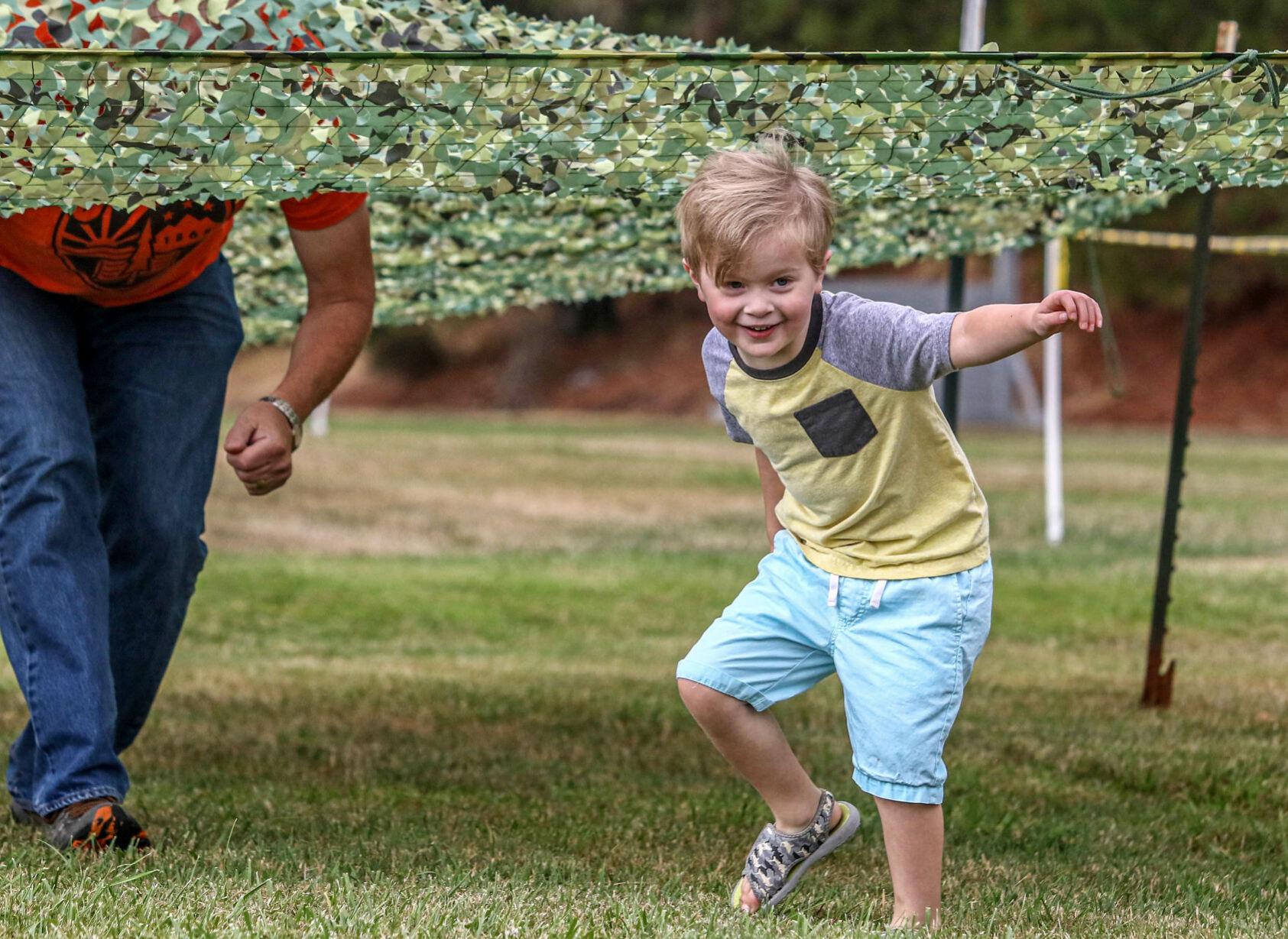 Brayden Frye, 3, quickly discovers he is the perfect size to escape the obstacle course netting while his grandpa, Curt Frye, has to work a little harder at it.

Carlos Mencia, center, owes the IRS nearly $1.2 million for three years of unpaid federal income taxes, according to a lien filed by the federal agency in Douglas County.

Carlos Mencia may be a nationally recognized comedian with a host of movies, TV shows, and albums to his credit, but the money he owes the IRS and the three Roseburg properties he stands to lose over those debts is no laughing matter.

To try and recoup the money, the IRS has placed liens on properties the couple owns in Roseburg. The Mencias own three properties in Roseburg, with the owner listed as the Amy and Carlos Mencia Living Trust, according to the Douglas County Assessor. All three properties are on River Club Drive, across the North Umpqua River from the Roseburg Country Club.

Carlos Mencia did not return messages seeking comment for this story.

Mencia, 53, was born Ned Arnel Mencia in Honduras, the 17th of 18 children. He later moved to East Los Angeles, California, where he was raised by an aunt and uncle. He attended college but dropped out to pursue a career in comedy.

In 1988, Mitzi Shore, owner of The Comedy Store in Los Angeles, told Mencia he should change his first name from “Ned” to “Carlos” in order to appeal to Spanish-speaking audiences. Mencia performed at established stand-up venues in Los Angeles, including The Comedy Store and The L.A. Cabaret. His success in those venues led to appearances on The Arsenio Hall Show.

Mencia continued to do stand-up, including a successful tour in 2001 with Freddy Soto and Pablo Francisco, known as “The Three Amigos.” Mencia also did two half-hour specials on HBO, the second of which won him a CableACE Award for Best Stand-Up Comedy. After the release of his first comedy album by Warner Records, Take A Joke America, Mencia performed in 2002 on Comedy Central Presents.

In 2005, Mencia got his own half-hour comedy show, Mind of Mencia. The show ran three seasons and at the time was Comedy Central’s second highest-rated program behind South Park.

Mencia also branched off into acting on TV and in movies. He appeared in a number of TV shows, including In Living Color and Moesha, and in a half-dozen movies, including The Heartbreak Kid and Our Family Wedding.

Despite the success, Mencia has been the target of criticism during his career. A Wall Street Journal article published in 2010 identified Mencia, along with Dane Cook and Jay Leno, as the most hated stand-up comics by fellow comedians.

But the biggest criticism leveled at Mencia had to do with charges of plagiarism. Comedian George Lopez accused Mencia of stealing 13 minutes of his material in Mencia’s HBO special. And comedian Joe Rogan famously confronted Mencia on stage at The Comedy Store in Los Angeles and accused him in front of the audience and fellow comics of plagiarism. Rogan then posted the video online, spliced with a number of comics doing their versions of a joke compared to a later version by Mencia. One of the comedians in the video was Lopez.

In a September 2019 interview, Mencia maintained he did nothing wrong and reiterated he has never stolen material. He also said that his team at the time, which included Comedy Central, told him to not address the situation. That made him look guilty, Mencia said.

But Mencia has apparently resurrected his career of late. He maintains a busy live performance schedule, with shows scheduled for Atlantic City on Friday and Nashville next week. He has nearly 30 shows scheduled through next spring.

His Facebook page has 468,000 followers, and he produces a podcast called “Conversations From the Green Room.”

Officers with the Roseburg Police Department search Brandon Kyle Kittleson, 32, on Tuesday afternoon in a parking lot near The News-Review in Roseburg. Kittleson was arrested on suspicion of attempted rape and assault.

Court documents provide new details about how a local man stabbed a woman and attempted to rape her at knifepoint.

On Tuesday afternoon, Brandon Kyle Kittleson, 31, approached a woman who was sitting near her tent under the Jackson Street Bridge, which separates the Roseburg Library and the Idle Hour Tavern. 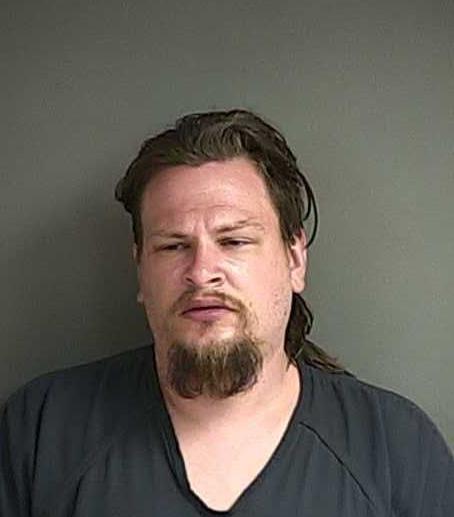 Kittleson sat down, lit a cigarette, and started complaining about his back hurting. The woman, attempting to make small talk, inquired about the pain, but Kittleson didn’t respond.

Instead, as he finished his cigarette, he reached up and grabbed the woman’s chest, according to court documents. The woman jumped up, but Kittleson didn’t let go and pulled out a knife.

He pointed the knife at the woman and told her to take her shirt off and get on the ground, otherwise he’d stab her, according to police.

The woman attempted to grab the man’s hands and then ran off, but not before she was cut by the knife’s blade. She sprinted toward the library to get away but soon noticed she was bleeding badly. She eventually made her way to the Shortcut Market and asked for help.

Kittleson, meanwhile, also fled the area, but was stopped by police just a few blocks away from the bridge — near The News-Review.

Kittleson had blood on his hands when he spoke with police, he said, but denied knowing the woman or what she was accusing him of, according to court documents. Police looked through his possessions and found a folding knife, which Kittleson said didn’t belong to him.

The woman was taken to the hospital and treated for a 2-inch cut on her wrist that extended between her thumb and fingers, according to court documents.

Kittleson was arrested on suspicion of attempting to commit first-degree rape, second-degree assault and harassment. He was lodged at the Douglas County Jail.

At left, Sgt. First Class Erik Fisher, of the Major Crimes section of Oregon State Police, speaks on the phone Friday at the site of an officer-involved shooting.

A Roseburg man is being held on $1.5 million bail after allegedly attempting to burn his parents’ house down.

John Paul Kliestik, 39, was arraigned in Douglas County Circuit Court Monday and formally charged on a number of charges after reportedly attempting to set his parents’ home ablaze in an alcohol-fueled rage, court documents state.

Roseburg police were called to a home at 1361 SE Magnolia St. to a report of a man attempting to set the home on fire with his parents trapped inside.

Police reportedly arrived to see that debris had been set on fire atop a five-gallon propane tank within the home. While one officer attempted to enter the home through the front door, two others attempted to enter through an alternative entrance, a court document stated.

When the first officer breached the front door, he could see debris burning on top of the propane tank. As the two officers entered through the secondary entrance, they encountered Kliestik at the top of a staircase.

Kliestik reportedly threw a television down the stairs, striking one of the officers. The other officer, Cpl. Pat Moore, fired at Kliestik to alleviate the threat. Kliestik was struck in his right leg, and another officer applied a tourniquet to slow the bleeding once he had been handcuffed.

According to a statement from Kliestik’s father, Kliestik had been drinking throughout the day and “became violent, as is common.” Kliestik’s parents left the home, considering a motel room for their safety but decided against it, concerned about what Kliestik might do to their home or himself.

The father called Kliestik and “made a deal with John that they would lock themselves in their room and John could stay in the rest of the residence,” the court document stated. Once in their room, the father barricaded the door to prevent Kliestik from entering, and when he tried, the barricade held firm. It was then that Kliestik reportedly began lighting fires inside the home.

Roseburg Police Department Chief Gary Klopfenstein confirmed Wednesday morning that Cpl. Moore has been placed on administrative leave, as is standard procedure with any officer-involved shooting.