State Sen. Dallas Heard, R-Myrtle Creek, said he turned up at Douglas High School Wednesday morning for a speech that some students invited him to give, but the administration kicked him out.

Heard said he had planned to give his speech outdoors to allow for social distancing.

The speech was to be on the topic of fundamental individual rights, he said.

“It is important to help the youth understand that government must always have certain restraints in order to ensure our freedoms, and freedoms for all individuals in our society. I was going to speak to them about how bullying, no matter what form it takes, is not acceptable,” he said.

Heard said his visit had been cleared with the school’s administration prior to his arrival. He said he arrived at 6:30 a.m. and some students helped him set up sound equipment.

Ten minutes later, he said, the first police vehicle arrived and two more showed up shortly after that.

At about 6:50 a.m., he was approached by a school resource officer and told that he was trespassing and must leave.

He said the school officials did not speak to him directly, and Winston-Dillard School District Superintendent Kevin Miller called and would talk only through the police officer on the other end of the line, not to Heard directly.

He also said Douglas High School Principal Craig Anderson stood about 150 feet away and would speak only to the school’s resource officer.

“At one point I was told that I would be able to deliver my remarks so long as I ‘stood on the highway’ to deliver them,” he said.

“I truly am at a loss as to why the administration would take what was clearly a premeditated action, and conduct their business the way they did. If at any point they had had an issue with me coming to speak to the students, they could have just as easily reached out to me in advance and we could have avoided this conflict,” he said.

He said he’s “greatly discouraged by what took place yesterday,” and the students’ voices “should not be silenced.”

A spokesperson for the Winston-Dillard Public School District said the district was declining comment for this story. 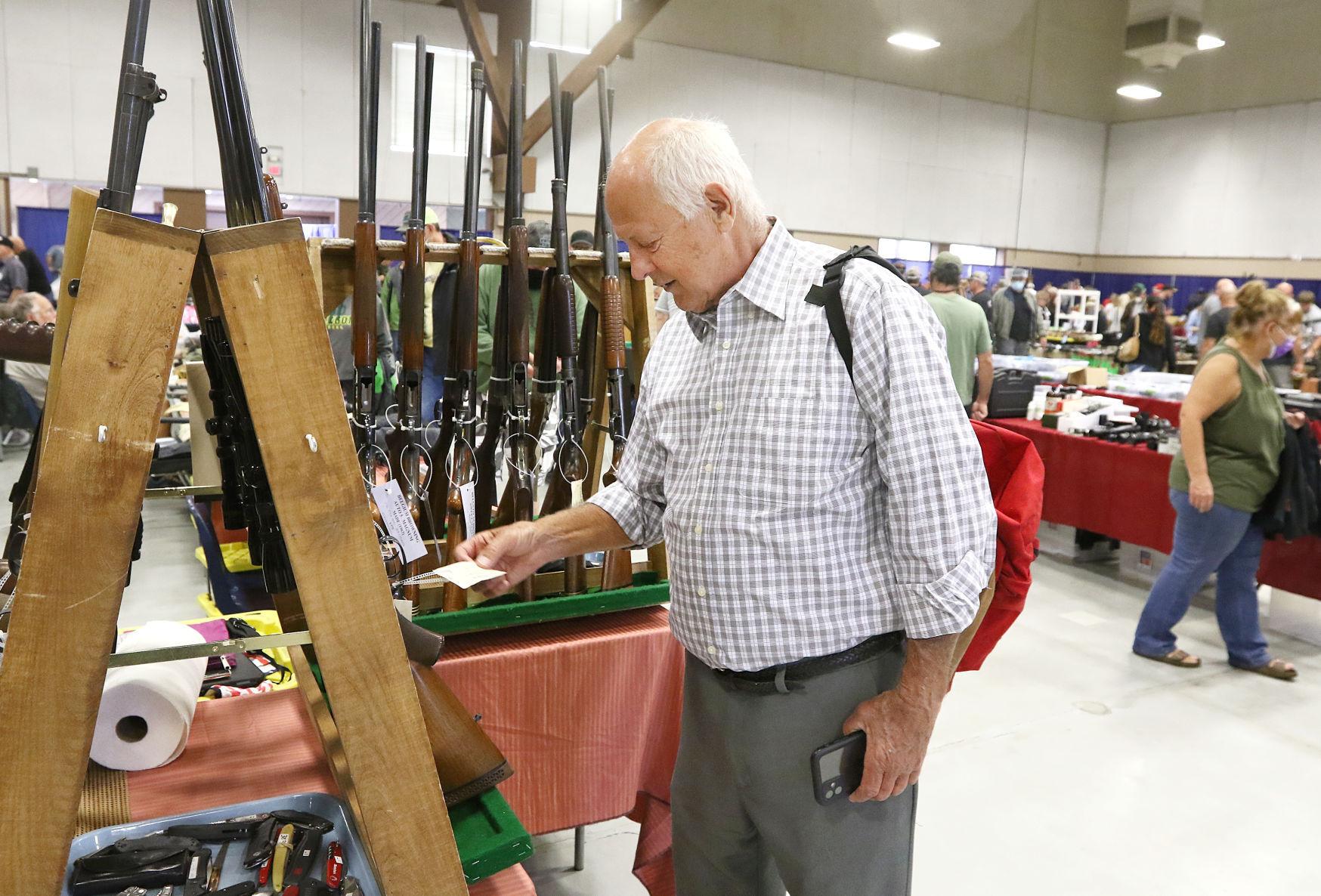 Leonard Meyers of Roseburg checks out a rack of rifles for sale during the Roseburg Gun and Knife show presented by the Roseburg Rod and Gun Club in Roseburg on Saturday.

Leonard Meyers of Roseburg checks out a rack of rifles for sale during the Roseburg Gun and Knife show presented by the Roseburg Rod and Gun Club in Roseburg on Saturday.

Visitors check out items for sale at the Roseburg Gun and Knife show presented by the Roseburg Rod and Gun Club in Roseburg on Saturday.

By 9 a.m. Saturday, people were lined up outside the door to Douglas Hall, eagerly waiting to see the guns and knives vendors were selling at the Roseburg Gun & Knife Show.

Organizer Del Applegarth said typically the event gets 1,500 to 2,000 people through the door. Many return on Sunday, since the admission fee covers the whole weekend.

One key to the show’s continued success is that it does not allow for vendors who sell large quantities of knickknacks, and 90% of items at a table must be gun- or knife-related.

He said the event, hosted by the Roseburg Rod & Gun Club, normally sells 275 vendor tables, but this year sold 180 so they widened the aisles and the vendors’ space.

Applegarth used to own Cascade Tackle in Roseburg, and said he was 9 years old when he shot his first deer at a ranch in Drain.

“Mom had venison every day except Sunday. Sunday was chicken,” he said.

Jamie Pierce of Winston said Saturday he visited the show just to look around.

“I just like to see all the nice old guns and see what they got out of there, and usually they have some really good prices,” he said.

He is a hunter and fisherman and attends the gun show every year. He said he usually buys items like ammunition and scopes.

Alan Trask, of Winston, was seeking guns on the quasi-collectible side. But he said he only wanted to buy something if the price was right, and he hadn’t found it yet.

It’s been decades since he’s been out hunting or done competitive shooting. But he appreciates the engineering and craftsmanship that goes into some firearms. He owns a couple of World War II guns and has a soft spot for particular brands, he said.

“You just never know. I’ve been known to stumble across the Holy Grail,” he said.

On the other side of the building, Colt Coudare of Santiam Buyers in Stayton, Oregon had a table full of guns to sell, many of them antiques from a large estate sale in the Salem area.

Coudare said the business, which has a storefront in Stayton, has come to the Roseburg show for close to 20 years.

He said many people have been interested in handguns, including a lot of new shooters who feel nervous and worry there’s too much political uncertainty in the modern world.

“A lot of people just want to be better prepared,” he said.

Coudare said his favorites are the old military guns, especially from World War I and World War II. He’s been collecting guns since he was 18.

“I’ve been doing it long enough that anything out of the ordinary is fun,” he said.

He said he’s sold anywhere from eight guns to 80 at the Roseburg show in the past.

Bill Burkhert, of Canyonville, had thousands of knives laid out at the Techtron Knife Supply tables, of every kind you could imagine.

He had folding knives, army knives, daggers, Damascus steel knives, double-bladed folding knives with a bat design, throwing stars in silver and tie-dye, throwing cards with four sharp edges, credit card utility knives that could slide into a wallet and offer smooth and serrated edges, a wrench and a ruler all in one.

He uses knives when he’s fishing, too. He enjoys participating in bass tournaments.

He got started selling knives when his daughter had a game booth at Pioneer Days.

“I was buying inventory for her booth and there was a promotion with free knives, so we put them up for sale and they sold,” he said.

For the next festival, they ordered more and those sold, too.

Burkhert said he only sells at gun and knife shows and considers it a hobby.

“It’s something to do on the weekend,” he said.

The Roseburg Gun & Knife Show continues Sunday from 9 a.m. to 3 p.m. Admission is $8, and children under 12 are free with a paid adult admission.

The estate of a woman who was killed after the car she was in was reportedly hit head-on by a truck being driven by a Roseburg construction company worker, has filed a complaint against the company for more than $2 million.

The 10-page complaint was filed by Anthony Zarbano, as personal representative of Glenna Zarbano, in Douglas County Circuit Court on Aug. 17. Glenna Zarbano’s daughter, Dianne Thornton, who was in the car at the time and reportedly injured in the accident, is also a plaintiff in the complaint.

The defendants are Sigfridson Construction Inc., and Case Sigfridson, who is listed as an employee and/or agent of the company.

According to the complaint, on Oct. 18, 2019, Thornton was driving her mother’s 2013 Toyota Prius, and Glenna Zarbano was a passenger. Thornton was heading north on Roberts Creek Road in Roseburg and Case Sigfridson was driving a 1997 Ford pickup truck in the opposite direction. Suddenly, Sigfridson veered out of his lane and “careened” toward the Prius.

Zarbano was 88 years old at the time of the collision. Prior to the crash she suffered from heart disease and congestive heart failure, and had a “critical and life-saving heart surgery,” planned, the complaint said. As a result of the traumatic injuries suffered in the accident, she was unable to undergo the surgery. Because of that, Zarbano’s condition rapidly declined and she died of congestive heart failure a month later, on Nov. 21, 2019, according to the complaint.

During that month, Zarbano dealt with “physical pain, anguish and suffering” as a result of the accident along with myriad injuries, including pain and numbness in her neck and back, as well as “cervical, thoracic, and lumbar sprain/strain injuries,” the complaint said.

“(Thornton’s) injuries are permanent and degenerative in nature and have increased her susceptibility to future injury, degenerative arthritis, and degenerative disc disease,” the complaint said. “Furthermore, (Thornton) has been caused an impairment to the enjoyment of her lifestyle.”

According to the complaint, Case Sigfridson was negligent in one or more of the following particulars:

The complaint seeks a total of $2.275 million from the construction company.

Both Zarbano’s estate and Thornton are represented by Salem attorney Emily Crocker Stebbins.

Sigfridson Construction Inc. had not responded to the complaint as of Friday, according to court records. The company did not return a phone call seeking comment for this story.