The Mehl Creek Fire south of Elkton had burned an estimated 150-200 acres as of midnight Wednesday.

A wildfire burns on a ridge near Elkton in rural southwestern Oregon. The Mehl Creek Fire had burned an estimated 150-200 acres on private timber land as crews continued to fight it into the evening. A dry spring has brought an early fire season to the region.

Update, Wednesday, 12:00 p.m.: As of noon Wednesday, fire crews had completed a fire line around 100% of the Mehl Creek Fire burning south of Elkton, according to Douglas Forest Protective Association spokesperson Kyle Reed. Crew were still working to tie in indirect fire line closer to the burned area and installing hose lines around the perimeter of the fire.

No homes are threatened and there are no evacuation orders in place.

A wildfire roughly 3 miles south of Elkton was estimated to have burned between 150-200 acres as of midnight Wednesday.

Crews from the Douglas Forest Protective Association and Elkton Rural Fire Department were dispatched to the fire, which was estimated at 40 acres as of 8:25 p.m. Tuesday and buring north. The fire was burning in an area that had been previously logged and was spreading quickly up a steep hillside through heavy brush and residual logging slash.

As of this morning the fire was 50% contained, according to the DFPA.

Kyle Reed, a spokesperson for the Douglas Forest Protective Association, said the fire was not posing an immediate threat to homes or outbuildings.

“There are some scattered homes, and there have been a ton of questions about where the fire is and what direction it’s going,” Reed said. “We’re trying to get that information out as quickly and accurately as we can.”

Four bulldozers were successful in digging indirect containment lines around approximately 80% of the fire, while 12 engines and five water tenders worked to cool the perimeter of the fire. Additional hand crews will help tie in those containment lines.

As of Wednesday morning, 115 personnel were assigned to the fire, including two helicopters to provide water drops.

There are currently no evacuation orders in place, and the cause of the fire is under investigation.

The Oregon Department of Forestry and Coos Forest Protective Association are assisting on the fire.

Douglas County District Attorney Rick Wesenberg makes a closing statement during the sentencing hearing in the trial of Tristan Ray Stanton on Tuesday at the Douglas County Courthouse in Roseburg.

“We are asking you respectfully: honor these girls.”

That was the request from Douglas County District Attorney Rick Wesenberg to Circuit Court Judge Ann Marie Simmons at the sentencing hearing for Tristan Ray Stanton on Tuesday afternoon.

Simmons sentenced Stanton, 34, of Roseburg, to 275 years in the Oregon Department of Corrections after he was unanimously convicted of 29 counts of sex crimes against four girls. 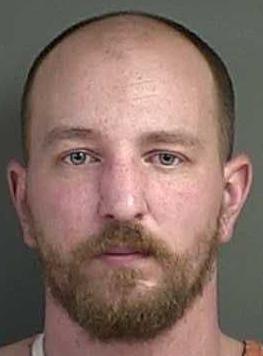 All told, Stanton was sentenced to 3,306 months — 275 years, 6 months — in prison, a sentence Wesenberg later called “unheard of.”

The allegations first came to light in January 2020, when a woman told Roseburg Police Department officers that her daughter had revealed inappropriate contact by Stanton at a home in southeast Roseburg. Two other girls came forward with sexual allegations against Stanton, and later, a fourth girl admitted to suffering similar abuse.

The allegations included both personal physical abuse as well as the use of adult sex toys.

Wesenberg urged the court to go beyond Oregon’s Measure 11 minimum sentencing guidelines based on the severity of the crimes. Stanton’s defense attorney, Carole Race, asked Simmons to impose a 300-month sentence — 25 years — over all of the charges, to be served concurrently.

“We are asking you to validate each of the victims in this case,” Wesenberg said. “There are ... there are no words to describe what this defendant did to those girls. They will never be the same. 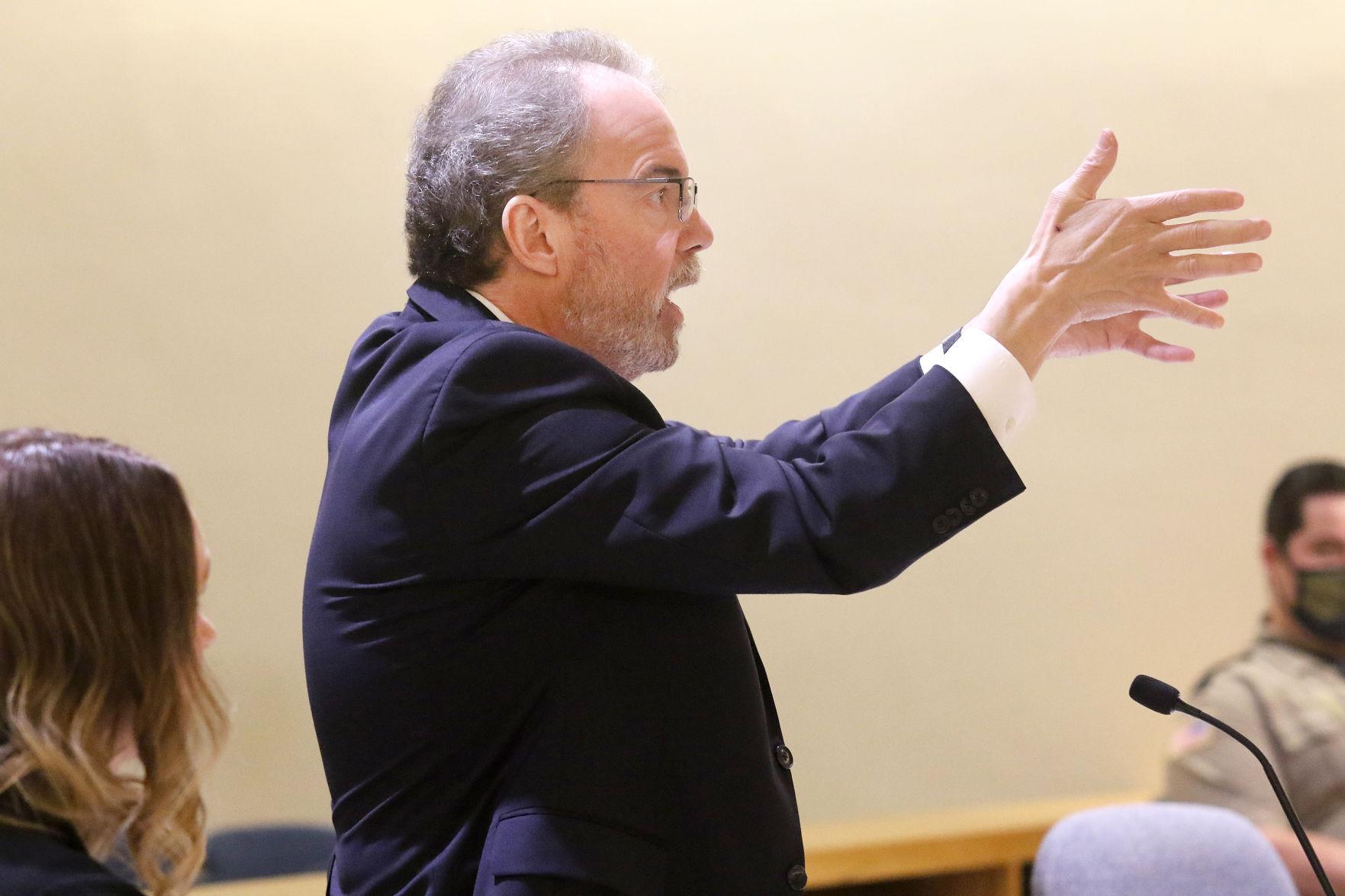 Douglas County District Attorney Rick Wesenberg makes a closing statement during the sentencing hearing in the trial of Tristan Ray Stanton on Tuesday at the Douglas County Courthouse in Roseburg.

“We know with certainty about these four girls, and we suspect with great certainty of two more,” Wesenberg said, both hands pointed at Stanton. “I can’t tell you as I’m standing here how many more children he’s had at!”

Wesenberg’s comments were interrupted briefly by a woman seated behind the defense table, who he said had been muttering obscenities throughout his argument.

“That’s enough,” Wesenberg shot back, red in the face.

The woman was ordered out of the courtroom, and Wesenberg continued.

“None of these girls could come speak before you today, but they were so brave to come in and talk in front of that jury,” Wesenberg said.

In the defense’s argument for a 25-year sentence, Race said that Stanton could use that time to reflect on his actions and still have a chance to live a normal life when he was released. 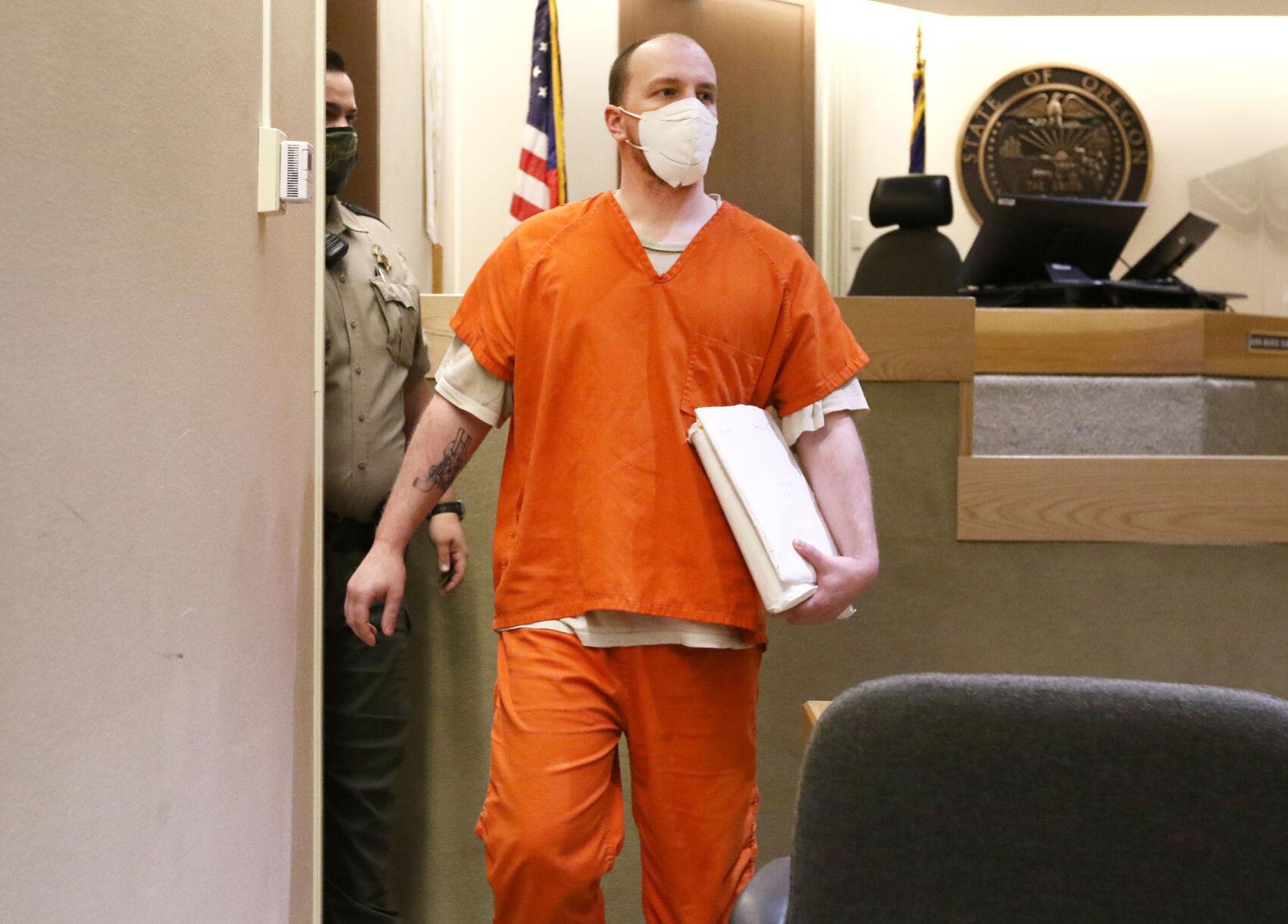 Defendant Tristan Ray Stanton enters a courtroom at the Douglas County Courthouse in Roseburg on Tuesday prior to his sentencing hearing after previously being convicted on 29 counts of various sex crimes against four juvenile girls.

“Mr. Wesenberg claims that these girls have undergone some kind of trauma that they will never get over,” Race argued. “That somehow it was above and beyond what any other child who’s been a victim of this type of crime has endured.

“This isn’t some super-special, serious — I mean, it’s serious — it’s as serious as Measure 11 claims it to be in every case,” Race said.

Stanton declined to address the court before Simmons issued her sentence.

“I work very hard to find a place to work encouragement into my sentences,” Simmons said before issuing the sentence, “but there is absolutely nothing in this case that I find redeeming. There is nothing I can say to them or say to you that can make anything better.

“There was nothing good that came of this.”

During the ceremony, six students received a certificate that they can present to colleges, but they also receive gifts to connect them to the tribe and the tribal education.

On Saturday, the students will get a chance to wear eagle or turkey feathers as they walk across the stage at the Roseburg High School commencement ceremony.

In fact, graduates throughout Oregon will be allowed to wear tribal regalia as they participate in their commencement ceremonies due to a new law.

“I think it’s important that (students) understand that they don’t have to give up their identity as tribal people in order to achieve their education,” said Juliana Marez, who heads the American Indian education program at Roseburg Public Schools.

Roseburg High School Principal Jill Weber said Native American students have been allowed to wear tribal regalia for several years during the official ceremony. But that was not the case everywhere in Oregon, which is why the Oregon Department of Education brought the issue to the attention of the governor.

Colt Gill, the executive director of the education department, wrote that even though his office requests superintendents and principals allow tribal regalia or objects of cultural significance at school events, that doesn’t always happen.

“Nearly every year some students have been denied this basic request to express and honor their culture,” Gill wrote. “Your passage of this bill would allow me to let school leaders know they are required to preserve the rights of our Native American youth.”

The Oregon Legislature passed House Bill 2052 which allows Native American students to wear items of cultural significance at public school events, specifically graduation, and the bill was signed by Gov. Kate Brown on May 21.

Sen. Dallas Heard, R-Myrtle Creek, was the lone no vote on the bill. In his explanation, Heard wrote, “I fully support this concept and agree that students should be able to wear Native American items of cultural significance, so long as it does not disrupt or replace a cap and gown. It is a part of the student’s identity, and they should be able to showcase that at such an important milestone.” The reason for his no vote was that people were not able to speak to the Legislature directly due to COVID-19 restrictions and that the virtual format does not provide an honest, open and transparent discussion on matters.

Roseburg resident Regina Woods was able to submit her written testimony, which read in part, “It’s ridiculous that a bill like this has to even be proposed. Systemic racism like this should not still be in our schools. Native American students should be allowed to wear culturally significant items. I fully support this.”

Renae Guenter, South Umpqua School District’s Tribal Attendance Promising Practices’ family advocate, also submitted testimony ahead of the bill’s passing in which she wrote, “High school graduation should be a time where Indigenous students are honored for their hard work and achievement, especially given that native students are less likely to graduate from educational institution that was designed to strip us of our native identities and culture.”

Marez said she organized the special ceremony to let students know how proud the district, and the parents, are of them.

“Their tribal identity is with them for all their life,” Marez said. “Their school years, they may spend 12-13-14 years in education. But tribal life, is all your life. It’s important for them to maintain that long-term relationship with their people. Their tribal education, their tribal identity. There’s a lot of resilience in that.”

Guenther said that in her time with the South Umpqua School District, parents have expressed uncertainty and anxiety about their students wearing culturally significant items during graduation, despite the fact that the administration has been supportive.

“The passing of HB2052 will break down those barriers, especially for districts around the state that are less flexible with their graduation policies,” Guenther said Tuesday. “This bill will lend to educational equity and honor cultural identities.”

In Roseburg, the students will receive either an eagle or a turkey feather to tie to their cap.

“For some of them, they just can’t legally carry an eagle feather,” Marez said. “So we get one that looks very much like it, but is still legal for them to carry. And those still represent the tribe, and those are beaded and decorated, usually with a personal meaning for them and for their tribe.”

Graduating Native American students at Roseburg also received a wooden feather made by a local artist from a wood that is significant to the tribe to which the student belongs. Marez also opted to purchase spa towels from Native American-owned business Eighth Generation to represent each students’ tribe.

“Those are just a reminder to the kids, to maintain their self care and stay healthy,” Marez said. “You know that if you go to college, you burn the candle at both ends and you don’t eat right and that kind of stuff. A lot of them will hang them on their college dorm wall as a piece of art, some may go to the spa and take care of themselves. They’re also used in sweat lodge, which is a purification right, and many tribes practice sweat lodge so they might use it for that. And some of them just take them and go to the beach and have a relaxing day.”