Ralph Huffman, right, and his wife, Carolyn, ham it up during a family Christmas gathering in 2019.

Ralph Huffman at the controls of a bulldozer at Washougal MX Park in Washougal, Washington. Huffman took over the motocross facility in 1980 and turned it into one of the most popular stops on the Lucas Oil Pro Motorsports series.

Ralph Huffman, a stalwart in the Douglas County timber community who went on to become one of the region’s most renowned motocross promoters, died Monday at age 83.

Huffman co-founded Huffman and Wright Logging in southern Douglas County in 1956 with long-time business partner Roger Wright. Later, Huffman took over management of the famed Washougal MX Park in Washougal, Washington, one of the most famous tracks on the professional motocross circuit.

“He was a great guy, just a guy that enjoyed life and enjoyed other people,” said Austin Weber, owner of Weber Logging and Construction in Glide. “It’s definitely a great loss to the community.”

When Huffman and Wright Logging launched 65 years ago, Huffman was a sawyer. But one fateful day when he was in his early 20s, his left leg was crushed when a log rolled off a log truck load. The lower half of his left leg had to be amputated, effectively ending his days sawing logs.

Instead, Huffman jumped behind the controls of a bulldozer and grew to become an expert with the blade.

“That was one of the things I admired most about him,” said his son Tim Huffman. “He was never handicapped, just inconvenienced.”

Tim Huffman has continued to work for Huffman and Wright as an on-site foreman in the field, while Mike Huffman is a superintendent with the company, splitting his time between the Canyonville shop and various logging operations through the county.

Ryan Huffman, meanwhile, took over management of the Washougal MX Park when it became too much for Ralph Huffman to handle on his own.

Ralph Huffman began helping out at the Washougal track in 1980, usually behind the controls of a bulldozer working to create a new and unique feature to the facility.

“He made it the most beautiful track ever, and he worked his butt off to keep it open for the people,” Ryan Huffman told ClarkCountyToday.com earlier this week. “

Ryan said that his dad could have sold off the land when the economy hit hard times, but that wasn’t his style. The land belonged to the motocross community, and he meant to keep it that way.

“He means about as much to Northwest motocross as anyone,” Ryan said.

Ralph Huffman’s personality was to stay in and fight, just as he did as times were growing lean in the timber industry, according to those who knew him.

Tim Huffman told of a period of time during the Great Recession of 2008 when Ralph kept roughly 60 of his employees on the Huffman and Wright payroll when times were incredibly tight.

“He was barely breaking even, but he wanted to make sure that his people were able to put food in their tables,” Tim Huffman said.

Ralph Huffman’s tenacity wasn’t purely limited to business: he also was apparently quite the practical joker. Tim Huffman told of a story when Ralph had taken his truck into the Huffman and Wright shop for some work, and the mechanics used a crane to lift Ralph’s truck into the loft of the shop. Legend has it that later, Ralph brought doughnuts to the mechanics, not telling them the pastries had been injected with Tobasco sauce.

Wally Plikat, who started Plikat Logging in 1979, shared stories of Ralph traveling around to the area logging and trucking companies dropping off pumpkins, just because he loved Halloween.

But Plikat laughed nearly to tears about the day Ralph Huffman showed up at his office unexpectedly. Plikat was away from the office and received a call that there was a man there to see him. Plikat arrived at his office to find Ralph Huffman seated in Plikat’s chair, behind the desk.

“That was just the guy he was,” Plikat said.

The family is planning a private service to remember Ralph Huffman Saturday before sending him off to his next venture.

Tim Huffman said, “A friend sent me a text that said, ‘God can move mountains, and now he has a dozer operator to help him.’”

At 10 1/2 years old, Lana Silvestri has set pretty clear goals for herself: get a golf scholarship to college and become a professional golfer on television.

Lana started playing golf a few years ago with her dad, Fred Silvestri.

“I used to watch my dad play, then he let me putt on the greens and it was really fun,” Lana said. “So I asked my dad if I could like get my own set of clubs, and I really liked it.”

Now, she’s traveling throughout the state for tournaments.

RiverRidge Golf & Event Center PGA Associate Aaron Oakley, who coaches Lana, said she has talent and is a great student who listens and takes directions well.

“She’s famous around here,” Oakley said. Lana gets coaching a few times a month at the club in Eugene, but always brings a smile and positive energy with her, according to Oakley.

Lana has placed in several one-day competitions and chip, putt and drive competition, but this year they’ll be adding a few more multi-day tournaments to their schedule, Oakley said.

That same quality is something echoed by her teachers at Umpqua Valley Christian School, where she’s a fifth grade student.

UVC Superintendent George Graham said Lana is “quite the golfer, and excellent student, cute as all get-out and is more humble than humble pie.”

Lana herself has managed to stay humble amid all the praise and continues to work toward her goals.

“By high school I have to shoot in the low 70s and I have to be an honor student,” Lana said. “So that’s basically my first goal with golf and school.”

Lana has all As on her report card and has been reading for hours each day during spring break.

Her favorite books are part of the “Warriors” series by Erin Hunter, a series of books about clans of feral cats.

At home Lana has a cat named Peanut, and a dog named Babylon, a lizard named Spotty, sheep, chickens and ducks. She hopes to be a veterinarian, if golf doesn’t work out.

Lana was born in China, where her mother, Dahui Pang, is from. The family now lives in Roseburg where Lana has attended UVC since preschool.

UVC doesn’t have a golf team, but Lana hopes that’ll change by the time she gets into high school.

Lana loves her mom, and gushed about her mom’s cooking. But also said she would much rather spend a day on the golf course than in the kitchen.

And while she appreciated her dad introducing her to the game of golf, she’s politely asked him not to be on her team for the school golf tournament this year.

“It’s okay, I took it well,” Fred Silvestri said. “And the way she’s presented it, it was really kind.”

Silvestri added that he knows that he’s not nearly as good as Lana.

“I enjoy it, but what I really enjoy is watching my daughter,” he said. “It’s almost like I’m reliving it through her. So I like being her caddy. She doesn’t like my advice, but she likes me carrying the clubs.”

The two California men taken into custody by the Douglas Interagency Narcotics Team have been transferred to federal custody and their cases will be prosecuted by the United States Attorney’s Office.

“We filed charges initially just to make sure they were held,” said Deputy District Attorney Ian Ross, who is the assigned DINT attorney for the county. Ross said the county District Attorney’s office had been coordinating with the U.S. Attorney up until minutes before the men were scheduled to be arraigned.

“The U.S. Attorney took the cases, so the state cases were dismissed right before they were arraigned,” Ross said, adding that drug cases prosecuted at the federal level have the potential to carry more strict sentences than could be imposed at the state level.

Once the transfer of the case was confirmed, Izar and Scherer were released from the Douglas County Jail directly into federal custody. 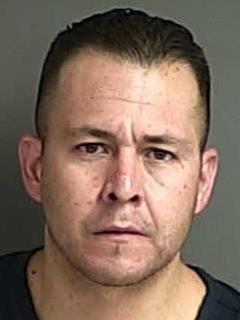