The Douglas County COVID-19 Response Team reported more new cases Thursday than any other day throughout the pandemic.

“We cannot even begin to tell you how hard it was to see and report the case numbers today. Disappointed would be an understatement,” the team said in a press release.

Over the past three days, the county has reported 116 new cases. That’s the highest three-day consecutive total.

“We have been very fortunate over the last 11 months to be one of the top five counties in the United States with the lowest case counts. But we are seeing that success slip away,” the release said.

The release said the team for the first time feels “we are losing our edge in combating this pandemic,” but it’s not giving up.

If the downward spiral continues, the worsening case numbers could jeopardize the county remaining in the state’s high risk level. It needs to remain at under 200 cases per 100,000 population over a two week period to avoid being pushed into the extreme risk level — a change that would force some struggling businesses to close their doors again.

He said he has seen more gatherings and some “unfortunate laxity with physical distancing and the use of face masks.”

The biggest outbreak is at a skilled nursing facility in Roseburg, he said. It has gone from a single positive case Feb. 5 to more than 33 positive cases as of Thursday, Dannenhoffer said.

He did not name the care facility. It did not appear in the state’s weekly outbreak report Wednesday, which often has a time lag for reporting.

So far, that outbreak has not been linked to any hospitalizations or deaths, he said.

The COVID-19 vaccine was offered to staff members and patients at the facility. Ninety percent of those who chose to be vaccinated were protected from contracting the virus, he said.

“This is proof that the vaccine works. If you are a front line caregiver and are eligible for the vaccine, please get it!” Dannehoffer said.

He said he’s also seen an increase in the cases connected to schools, churches, parties and travel. The school cases amount to 44% of the current outbreaks.

A few have also been workplace outbreaks. No large outbreaks have been related to gyms, restaurants or bars.

All were related to people failing to keep social distance and wear masks, he said.

No new deaths were reported Thursday.

Twelve county residents are hospitalized with the illness, nine locally and three out of the area.

Douglas Public Health Network is supporting 227 people with COVID-19 who are in isolation, as well as another 460 people who have been in contact with an infected person and are in quarantine.

Traditional public schools in Douglas County saw enrollment decrease by 1,050 students in the last year, which could have a multi-million dollar impact on schools.

Enrollment numbers are tied to the funding a school district receives. In Oregon, funding is based on enrollment for the previous or current year — whichever is more favorable.

This means that if enrollment goes back to pre-pandemic numbers by October 2021 there will be no financial impact to a district. However, if enrollment is down by 500 students it could negatively impact the Roseburg school district budget by more than $4 million.

“Our main concern with a decline in enrollment is the effect it has on our ability to provide caring and effective education to our community’s students from quality local teachers,” Roseburg Public Schools Superintendent Jared Cordon said. “Our district is an intrinsic part of the Roseburg community, and the partnership and teamwork that entails creates a special learning environment. Obviously, there are also budgetary implications when enrollment declines. Negative impacts on our budget can affect our robust programming options and our ability to continue to grow the supports and resources we offer to our students.”

Public school enrollment was down 3.7% throughout the state, according to enrollment data from the state.

Most schools in Douglas County saw a decrease in enrollment with the exception of Camas Valley and Days Creek schools which increased enrollment and North Douglas School District in Drain which had the exact same number of students.

Days Creek and Camas Valley schools opened their doors to in-person learning at the beginning of the 2020-2021 school year, while most other districts around the county waited to reopen. Roseburg Public Schools was the last district to bring students back, earlier this month.

“We have waiting lists for most of the classes,” Graham said.

“The families who are new, joining us from public school were offset by Geneva families who chose to homeschool this year because of uncertainty of the times and wanted consistency for their children regardless of what the state chose to do with lifting and imposing restrictions,” said Kellie Trenkle, who is on the vision and development team at Geneva Academy.

Homeschooling was a popular option among Douglas County parents.

“That choice likely made sense logistically for some families during school closures,” Cordon said. “We hope that with the reopening of our schools, we will have the opportunity to serve many of those students again.”

Last year the number of students who were homeschooled averaged around 800, as of Tuesday the Douglas Education Service District listed 1,460 homeschool students. Parents need to file an intent to homeschool with the service district.

Douglas ESD spokesperson Heather Villa pointed out that the data does not reflect students who recently re-enrolled in a district and “does not include students who are registered with online schools, charter schools or other.”

Roseburg Public Schools will launch its virtual school next year in the hopes of regaining and retaining students.

“Many parents have sought alternatives for this school year through online schools that were already established in this learning model, and we completely understand that motivation,” Cordon said. “That is one of the reasons we are working to create robust virtual options for our students next school year.”

Roseburg school district also saw enrollment increase as it started on site instruction at the elementary schools and hybrid learning at the middle and high schools.

“A number of families requested a transfer due to the fact that we, in following the health and safety metrics, were not immediately open to in-person instruction,” Cordon said. “Many of these families have returned to in-person and hybrid instruction.” 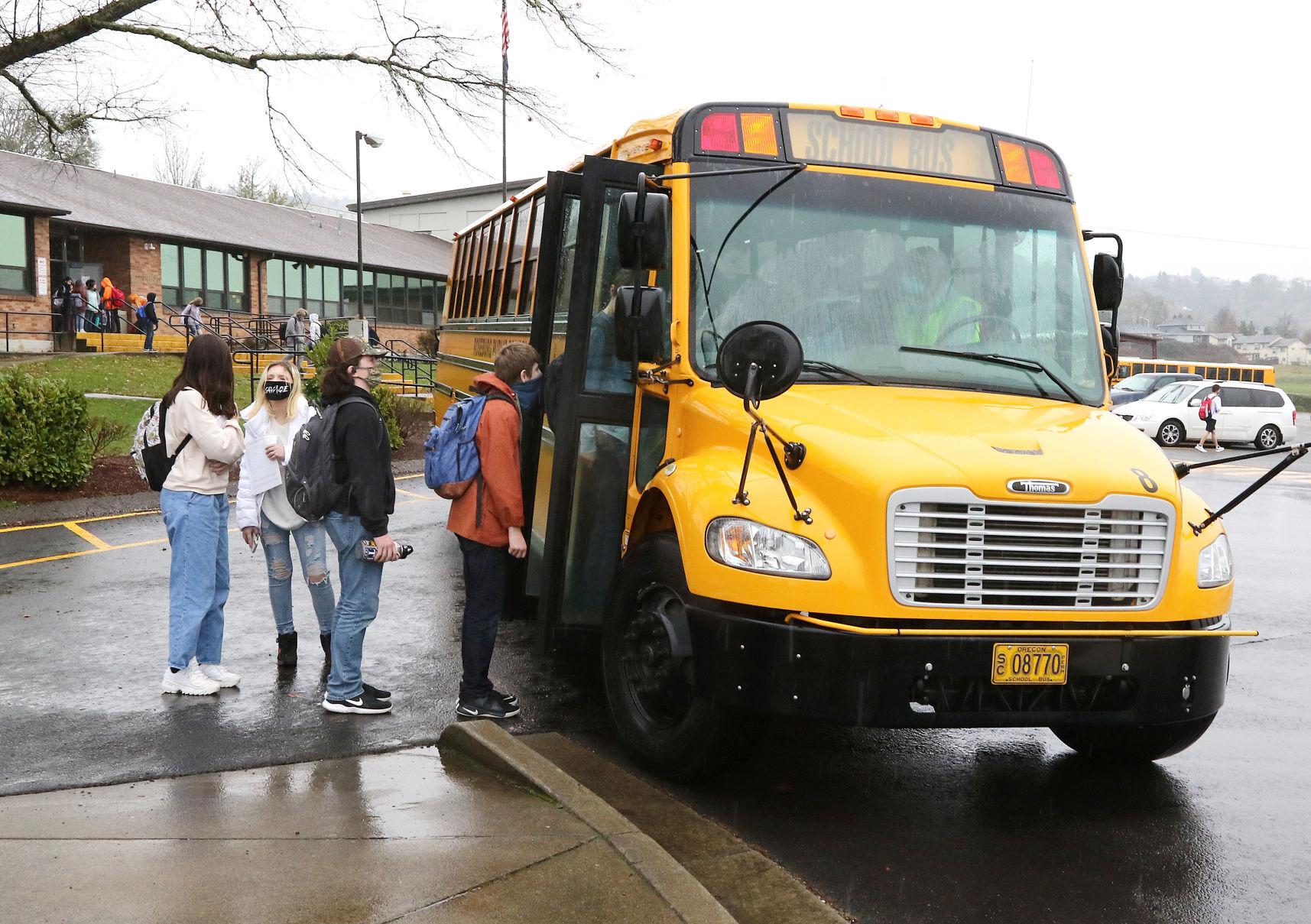 Students board their buses after school lets out at Joseph Lane Middle School in Roseburg on Thursday.

Community members will be able to provide feedback on the possibility of retiring the Roseburg High School mascot.

During Wednesday’s meeting the school board agreed to ask the public to respond to the following statement, “Roseburg Public Schools has adopted a Strategic Plan that focuses on providing equitable experiences to all students and ensuring they feel safe and included in their school environments. The district has also adopted an anti-discrimination policy focused on treating students fairly and justly. In accordance with these priorities and to follow our policy, the Board of Directors is considering the retirement of the current Roseburg High School mascot, the Indians. We welcome your comments.”

The mascot, Indians, stirred up controversy again this year when a petition was started to change it due to its racist nature. It’s not the first time the school district has debated whether to keep or retire the mascot.

“(This) would be a more clearer presentation to the community in where they truly understand that we need to retire the mascot,” school board director Howard Johnson said during the meeting. “We need to move forward. We need to do it quickly. We need to make sure that there’s no harboring of past traditions. Those days are gone.

“This country was made great through the genocides of Indians and the enslavement of Blacks, and we don’t want to go back to that. We want to move forward. I’m in favor of moving forward.”

A feedback form will be made available online from Feb. 15 to Feb. 22 on the school district website, www.roseburg.k12.or.us, or feedback may be submitted until Feb. 22 to the district office at 1419 NW Valley View Drive in Roseburg.

During Wednesday’s meeting school board director Brandon Bishop said, “It’s time to do better” after he read Maya Angelou’s quote, “Do the best you can until you know better. Then when you know better, do better.”

Respondents will be asked to provide their name, email address and affiliation with the district.

Roseburg school board talks about how to discuss mascot, school names with the community
SANNE GODFREY The News-Review
Jan 14, 2021

Roseburg Public Schools is creating a strategy on how to address the Roseburg High School mascot and school building names, a process that sta…