A wildland firefighter burns vegetation in an attempt to secure containment lines around the Jack Fire, which has burned more than 9,300 acres on both sides of Highway 138 in just five days.

The Jack Fire has burned more than 9,300 acres since it began five days ago.

Burning on both sides of Highway 138 East on steep, inaccessible terrain, the blaze grew about 70% overnight, according to updates provided by fire officials.

Crews were able to contain about 10% of the fire and will continue to construct primary, alternate and contingency containment lines around the burn.

Firefighters north of the highway are burning vegetation along the containment lines in an attempt to hold the fire south of Ragged Ridge. Crews will work to reinforce those lines and then will continue east and also secure lines protecting the Dry Creek community.

The southern portion of the blaze is well-established and burning in scarred land left behind by the 2002 Apple Fire.

Five helicopters were used Friday in an effort to support ground crews, but a strong smoke inversion in the morning prevented the choppers from flying until later in the day.

All Forest Service campgrounds — Apple Creek, Horseshoe Bend and Eagle Rock — are on Level 3 “Go!” evacuation orders. The Dry Creek community, as well as all residences on Illahee Road are also under Level 3 orders.

The Steamboat Inn, residences on Brindle Bug Road, Steelhead Caddis Road, and residences between mileposts 38-43 and 51-55 on Highway 138 are at a Level 2 “Set!” evacuation order.

Further evacuation information, along with an interactive map, can be found online at www.dcso.com/evacuations.

Consequently, Highway 138 East is closed from Steamboat Creek to milepost 55. The Oregon Department of Transportation has set up a “soft closure” at the Lemolo Lake junction for local access to nearby recreation areas, including Lemolo Lake.

A crowd looks on as classic cars and trucks pass through downtown Roseburg during the Graffiti Night Cruise Saturday evening.

Andrew Huffman of Newberg and his son Gavin Huffman, 3, watch the classic cars and trucks drive by with their family during the Graffiti Night Cruise in downtown Roseburg on Saturday.

A military Humvee leads the Graffiti Night Cruise in downtown Roseburg on Saturday.

A pair of classic vehicles participate in the Graffiti Night Cruise Saturday evening in downtown Roseburg.

A crowd looks on as classic cars and trucks pass through downtown Roseburg during the Graffiti Night Cruise Saturday evening.

Gavin Huffman, 3, bounced up and down on his dad’s knee as a procession of Corvettes turned on Southeast Main Street in Roseburg.

“It’s about to begin,” he shouted.

For Gavin’s dad, Andrew Huffman, of Newberg, the night cruise was a family tradition. As a teenager, Huffman would work at the family food booth serving elephant ears and other fried goods.

“The younger kids would watch the cars and the teenagers would work at the booth,” he said.

Huffman watched his own children and his nieces enjoy the night’s festivities. His daughter Thalia Huffman, 5, loved the bear mascot who rode in the passenger seat of a convertible.

“It was awesome,” Gavin said.

Russell Johnson, of Roseburg, hasn’t missed a single night cruise. For Johnson, Graffiti Weekend is the time of the year when he can reunite with high school friends who have moved away.

He also enjoyed bringing out his hot rod — a lowriding 1931 Ford with an exposed Chevy motor.

“I let the kids crawl all over the car,” Johnson said.

For Rob Edmunds, of Elkton, Saturday marked his first time joining the cruise with his car. He brought out his 1972 GMC Sprint decorated with a stuffed bull hanging on the rearview mirror, an ode to his rodeo days. He left his cowboy hat at home due to the heat but made sure his cowboy boots were on.

The night cruise brings back nostalgic memories for Edmunds.

“It kind of takes me back to high school,” he said. “A guy said to me the other day, ‘It kind of makes you feel 10 years younger.’”

Bob Lecrone, of Los Angeles, came up to Roseburg to see friends and to show off his toys. As a car enthusiast, Lecrone has expanded his collection to include over 75 vehicles — including some with famous pasts.

His 1947 Willys Jeep was used throughout the 1970s classic show, MASH. His friends called him and demanded he bring it for the night cruise, he said. Lecrone, who worked in film productions, decorated the vehicle with a foam machine gun.

In addition to his Jeep, Lecrone brought a 1967 Galaxie 500 he bought from the friend of his late father. While his dad never had the chance to own the car, Lecrone made sure to weld his father’s ashes under the front dashboard. That way he can always drive the car he loved, Lecrone said.

The crowd grew over the course of the night which made Leon Brown, of Myrtle Point, happy. He came out with a 1960 Ford Ranchero and a 1969 Trailswest Campster.

“After the pandemic, it’s good to see people out and without masks,” he said.

A man walks toward a homeless camp set up beneath a span of Interstate 5 in Roseburg in February.

A group of advocates and service providers for the area’s homeless community is scheduled to hold its first public meeting Monday to discuss ways to get food, clothing and other provisions to those in need in a more timely manner.

The City of Roseburg Immediate Needs Ad Hoc Committee is scheduled to meet at 3 p.m. via Zoom. The group will discuss how to better coordinate and distribute resources meant for the homeless population, how to improve sanitation and safe places to camp, according to an agenda sent out Friday.

The Immediate Needs Ad Hoc Committee members were appointed on June 8 by City Manager Nikki Messenger, with input from KC Bolton, CEO of Aviva Health. Bolton sits on the Homeless Commission and is chair of the ad hoc committee.

The group held its first meeting, in private, on June 15. City officials said at the time that the ad hoc committee was not considered a public body and therefore its meetings would not be held in public and no formal records would be kept of what was discussed.

The News-Review objected, arguing that the committee was a public body under Oregon law and that the public and the city would benefit by discussing such important matters in a public forum.

Portland attorney Jack Orchard, who is considered a preeminent expert on Oregon public record and meetings laws, said the question of whether the ad hoc committee was a public body was “a no-brainer.”

Orchard, who is on retainer for the Oregon Newspaper Publishers Association, sent an email to the city Friday afternoon, explaining why the ad hoc committee is a public body and why its meetings should be conducted in public.

“What is particularly troubling about your position is the exclusion of the public from the committee’s processes, in effect, the creation of secret government operations,” Orchard wrote. “The Public Meeting Law is not an impediment to effective government. Rather, the law assures public awareness about how government is responding to problems like homelessness. The question presents itself: ‘What does the city have to hide?’”

About three hours later city officials announced that Monday’s meeting would be open to the public via Zoom, and sent an agenda out with the announcement. It is unclear whether records will be kept of the meeting or whether documents presented will be made public.

The Homeless Commission has discussed setting up at least one other ad hoc committee, this one focused on finding a location for a homeless shelter with services, known as a navigation center.

The city is in line to receive a $1.5 million grant from the state to get the navigation center up and running. The primary task of the Homeless Commission is to help facilitate the development of the navigation center and all that entails, including finding a location, deciding what kind of shelter to provide and finding or developing a nonprofit to run it. 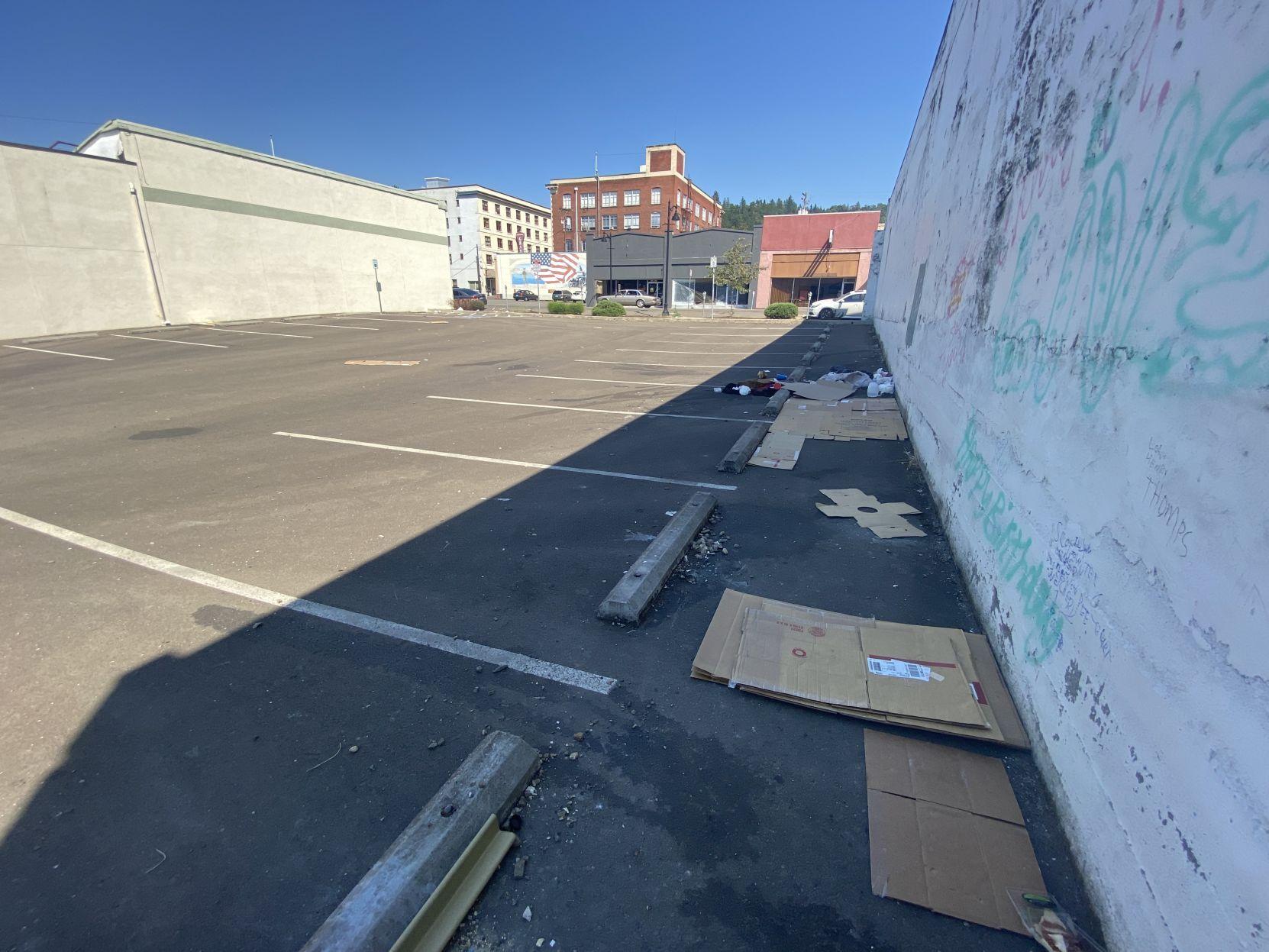 The empty parking lot in the 700 block of SE Stephens Street where Jackie Jones was June 27, during the hottest temperatures on record. The photo was taken the following afternoon.

The matter carries a bit more urgency following the June 27 death of a homeless woman who associates have identified as Jackie Jones. Jones was in a parking lot in the 700 block of Southeast Stephens Street at about 5 p.m. as the temperatures hit an all-time high of 113 degrees.

Jones, who associates said was in her early 60s, was known to sleep in that parking lot at times when she had nowhere else to go. Little is known about her, including whether she has any family in the area, whether her body has been claimed or whether any services have been planned in her behalf.

“The parking lot where it happened is depressing, to say the least,” said Betsy Cunningham, who came to know Jones through her work with Housing First Umpqua. “Think about if that was where you lived your life.”

Jones had one child, a son, Cunningham said.