Douglas County Republican Party Chairperson Valynn Currie, who attended Saturday and cast her vote as a delegate, said it was time for a change.

“We’re excited about it and it helps Southern Oregon,” she said.

She said this region didn’t have a lot of input before, but now it will.

“I like the energy that Dallas is going to bring to the ORP, and so that’s going to be positive,” she said.

Young Republicans of Oregon greeted the news of Heard’s selection with enthusiasm on their Facebook page Sunday, posting a GIF video of Heard’s face inside the Marvel Iron Man character’s suit.

“Suit up, Mr. Heard. We’ve got some work to do! Congratulations to Oregon Republican Party’s new Chair Dallas Heard!!” the group posted.

The Oregon Republican Party is separate from the Legislature. It was most recently in the news for making the inaccurate assertion that the Jan. 6 storming of the U.S. Capitol was a ‘false flag’ operation.

Heard, 35, is the owner of Emerald Lawns, a landscaping business in Douglas County, and has served as a state senator since 2018. When he joined the Senate, he was its youngest member. Previously, he served as a state representative.

His Senate district includes most of Roseburg and South County, as well as Curry County and parts of Coos, Josephine and Jackson Counties.

He has said he supports small businesses and campaign finance reform.

He has not shied away from controversy during his time in office. He participated in the Republican walkouts over proposed climate legislation and has consistently preached a message of individual freedom over what he sees as tyrannical government edicts.

He removed his mask on the state Senate floor on Dec. 21, saying he should not be forced to wear one and protesting what he called the governor’s “campaign of intimidation against the people and children of God.”

In January, he was embroiled in controversy over his involvement in a group called Citizens Against Tyranny, which published names of two senior women it said had reported local businesses for violating COVID-19 safety regulations. The two women were referred to as “filthy traitors,” though one said she had never made a report at all. The names were later removed.

Heard has said the purpose of the group was to support small businesses suffering under pandemic regulations, and that all elected officials should sign the group’s declaration or be purged from office.

Heard could not be reached for comment about his selection as party chair Monday.

An Oregon State Police trooper removes crime scene tape blocking off Northeast Stephens Street after a shooting at the Budget 16 Motel on Monday.

Police respond to a shooting Monday at the Budget 16 Motel on Northeast Stephens Street in Roseburg on Monday.

Police and first responders arrive at the CHI Mercy Medical Center in Roseburg after an "active incident" was reported at the Budget 16 Motel on Northeast Stephens Street in Roseburg on Monday.

A Douglas County Sheriff’s deputy checks for traffic before walking across Northeast Stephens Street in Roseburg on Monday.

Police tape surrounds a house at 674 NE Neuner St. on Monday. Police said the house was connected with a shooting that happened around 3 p.m. Monday at the Budget 16 Motel on Northeast Stephens Street.

Police opened up all but one lane of Northeast Stephens Street about 4 p.m. Monday after a shooting at the Budget 16 Motel.

A deputy stands in front of a vehicle blockade on Northeast Stephens Street in Roseburg near the Budget 16 Motel where police responded to a shooting on Monday afternoon.

An Oregon State Police trooper puts up crime tape across the street from the Budget 16 Motel, where police responded to a shooting on Monday afternoon.

A detective walks away from the Budget 16 Motel where police responded to a shooting on Monday afternoon.

Police gather in the parking lot of the Budget 16 Motel after several people were taken to the hospital following a shooting on Monday.

Police block off a house in the 600 block of Northeast Neuner Street, located across the street from the Budget 16 Motel where police responded to a shooting on Monday afternoon.

When Edward Russell stepped outside of his room at Budget 16 Motel on Monday, he was not expecting to witness a man with a gun open fire on at least three people.

The gunfire left one person dead and two others injured, including one who was transported to PeaceHealth Sacred Heart Medical Center at RiverBend in Springfield, according to a CHI Mercy Medical Center official. 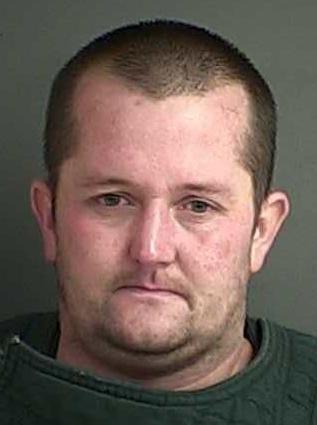 According to court documents released Tuesday morning, a man named Michael Benson, 36, was fatally shot, while Spring Mack, 40, and Jessica Ashley, 44 were both seriously injured in the shooting.

A report from Roseburg police released late Tuesday morning stated that after both women were transported to Mercy, where Mack was in fair condition as of noon Tuesday, according to a spokesperson from the hospital.

Ashley was later transferred to Oregon Health Sciences University in Portland with life-threatening injuries. Her condition was not available as of Tuesday.

Devin Lee McNamara, 33, was booked Monday into Douglas County Jail on one count of second-degree murder and two counts of first-degree assault. McNamara, of Roseburg, was being held on $750,000 bail for the three felony charges.

McNamara was scheduled to be arraigned at 1:15 p.m. Tuesday.

McNamara reportedly first opened fire on the three victims with a handgun, then fled to a nearby home across from the motel and returned with a pair of rifles. McNamara admitted to an investigating officer that he had walked to the motel “in a rage” and fired the pistol into a group of people gathered outside one of the rooms.

McNamara, who said he did not know the victims, allegedly fired the shots from between 5 and 6 feet away, according to a court document. After running out of bullets, he left and returned with the rifles. McNamara was tackled by an off-duty Roseburg police officer in the parking lot of OK's Auto Supply, where he was held until two on-duty Roseburg officers took him into custody.

The Douglas County Major Crimes Team was activated and is investigating the shooting.

Edward Russell lives at the Budget 16 Motel and had stepped outside his room when he saw the alleged shooter approach a room at the motel.

Russell said he heard the shooter yell “where’s the dope,” before opening fire on three people with a handgun.

Russell added that he had known one of the victims for more than 20 years, including a period of time where they lived together in Montana.

Russell said the shooter moved to the opposite side of Northeast Stephens Street, where he could be seen brandishing a rifle. As soon as the suspected shooter placed the rifle in the back of a truck, two other individuals quickly subdued him until police arrived.

“We were yelling that he was shooting people, and he started walking toward two people trying to talk to them,” Russell said. “One of them just socked him in the face. They got him in a headlock and started kicking the shit out of him before the cops showed up.”

Police blocked off Northeast Stephens Street for more than an hour. Several people parked in a nearby vacant lot to watch the investigation unfold.

Crime scene tape surrounded a nearby house in the 600 block of Northeast Neuner Street. Police officers on the scene confirmed it was connected with the shooting.

Sanne Godfrey contributed to this report.