President Joe Biden delivers remarks Monday on the full FDA approval of the Pfizer-BioNTech coronavirus vaccine in the South Court Auditorium on the White House campus in Washington.

The Pentagon promptly announced it will press ahead with plans to force members of the military to get vaccinated amid the battle against the extra-contagious delta variant. The University of Minnesota likewise said it will require its students get the shot, as did Louisiana’s major public universities, including LSU, though state law there allows broad exemptions.

More than 200 million Pfizer doses have been administered in the U.S. under emergency provisions — and hundreds of millions more worldwide — since December. In going a step further and granting full approval, the Food and Drug Administration cited months of real-world evidence that serious side effects are extremely rare.

President Joe Biden said that for those who hesitated to get the vaccine until it received what he dubbed the “gold standard” of FDA approval, “the moment you’ve been waiting for is here.”

“Please get vaccinated today,” he said.

Pfizer CEO Albert Bourla called the FDA’s action “an important milestone that I think will unlock some of the more skeptical minds.”

Pfizer said the U.S. is the first country to grant full approval of its vaccine, in a process that required a 360,000-page application and rigorous inspections. Never before has the FDA has so much evidence to judge a shot’s safety.

The formula, jointly developed with Germany’s BioNTech, will be marketed under the brand name Comirnaty.

Moderna has also applied to the FDA for full approval of its vaccine. Johnson & Johnson, maker of the third option in the U.S., said it hopes to do so later this year.

Just over half of the U.S. population is fully vaccinated. Vaccinations in this country bottomed out in July at an average of about a half-million shots per day, down from a peak of 3.4 million a day in mid-April. As the delta variant fills hospital beds, shots are on the rise again, with a million a day given Thursday, Friday and Saturday.

Full approval of Pfizer’s COVID-19 vaccine means it meets the same “very high standards required of all the approved vaccines we rely on every day,” said Dr. Jesse Goodman of Georgetown University, a former FDA vaccine chief. That should help “anyone who still has concerns gain confidence” in the shots.

Earlier this month, Defense Secretary Lloyd Austin said he would seek the president’s OK to make the vaccine mandatory by mid-September or once the FDA grants final approval, whichever comes first. On Monday, after the FDA acted, the Pentagon said guidance on vaccinations will be worked out and a timeline will be provided in the coming days.

The approval also opened the way for swift action by colleges to require vaccines and solidified the legal ground for hundreds of universities that have already issued mandates for students and staff.

The public university systems in Louisiana and Minnesota had been waiting for FDA action before making vaccinations mandatory. Louisiana has become a COVID-19 hot spot, repeatedly breaking records for the number of people hospitalized with the virus. But certain other states forbid universities to require shots, including Texas and Florida.

“Mandating becomes much easier when you have full approval,” said Dr. Carlos del Rio of Emory University. “I think a lot of businesses have been waiting for it.”

On the same day the FDA decision came down, New York City announced that all public school teachers and other staffers will have to get vaccinated.

The delta variant has sent cases, deaths and hospitalizations soaring in recent weeks in the U.S., erasing months of progress. Deaths are running at about 1,000 a day on average for the first time since mid-March, and new cases are averaging 147,000 a day, a level last seen at the end of January.

Elizabeth Nichols, 18, of Akron, Ohio, said she felt “a rush of relief” after hearing the news of the FDA’s approval. She already was on her way to get her first vaccine shot Monday morning after months of hesitation.

“I had an internal battle of whether I should get the shot or not,” Nichols said in an email. “It can be scary subjecting yourself to something that is unapproved.” But she added: “The authorization proves how safe it is.”

The FDA, like regulators in Europe and much of the rest of the world, initially allowed emergency use of Pfizer’s vaccine based on a study that tracked 44,000 people 16 and older for at least two months — the time period when serious side effects typically arise.

Pfizer’s shot will continue to be dispensed to 12- to 15-year-olds under an emergency use authorization, until the company files its application for full approval.

Normally, doctors can prescribe FDA-approved products for other reasons than their original use. But FDA’s acting Commissioner Dr. Janet Woodcock strongly warned that the Pfizer vaccine should not be used “off-label” for children under 12 — a warning echoed by the American Academy of Pediatrics.

Both Pfizer and Moderna have vaccine studies underway in youngsters, and they are using lower doses than those available for people 12 and older.

Pfizer’s Bourla said he expects study results from 5- to 11-year-olds by the end of September, but data for those younger than 5 will take a couple of months.

Also, Woodcock said health providers are offering COVID-19 vaccines under agreements with the government that should preclude using Monday’s approval as a pretext for offering booster shots to the general population.

Currently, the FDA has authorized third doses of either Pfizer’s or Moderna’s vaccine only for certain people with severely weakened immune systems, such as organ transplant recipients. For everyone else, the Biden administration is planning for boosters starting in the fall. But the FDA is evaluating that question separately.

In reaching Monday’s decision, the FDA said serious side effects remain very rare, such as chest pain and heart inflammation a few days after the second dose, mostly in young men.

As for effectiveness, six months into Pfizer’s original study, the vaccine remained 97% protective against severe COVID-19. Protection against milder infection waned slightly, from a peak of 96% two months after the second dose to 84% by six months.

Those findings came before the delta variant began spreading, but other data from the Centers for Disease Control and Prevention shows the vaccine is still doing a good job preventing severe disease. 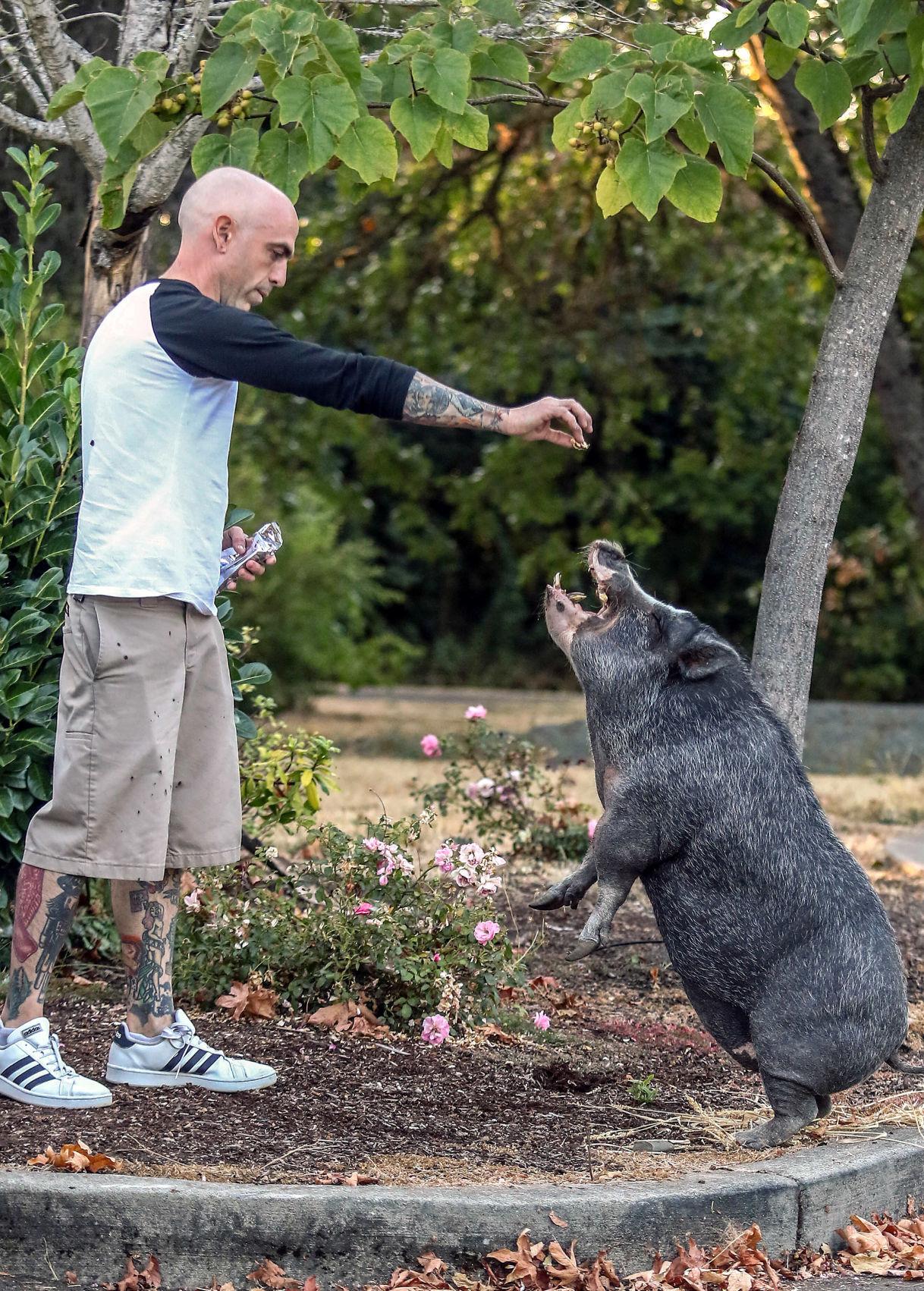 Choom-Choom, a miniature Juliana pig, performs for a treat from Jimbo Cutler after a walk at Fir Grove Park on Monday evening. According to his Facebook page, Choom-Choom enjoys bike rides to the beach and — you guessed it — to eat a lot.

Any day now the city of Roseburg is expecting to receive about $2.6 million from federal legislation intended to help local governments offset costs and lost revenue associated with the coronavirus pandemic. The city is in line to get another $2.6 million from the same legislation next year.

The question now? How to spend it.

The Roseburg City Council on Monday heard an explanation of where the funds are coming from and what they may be used for from City Manager Nikki Messenger. The funds are part of $350 billion being distributed to local governments as part of the $1.9 trillion American Rescue Plan Act, which President Joe Biden signed into law in March.

“No decisions really need to be made tonight, we just wanted to get you thinking about it,” Messenger told the council.

Messenger said she and other staff members are still learning the intricacies of the legislation. But in general, the funds must be spent in one of four eligible categories:

City Councilor Bob Cotterell suggested the council schedule a workshop to thoroughly discuss and make decisions on the expenditures.

Councilor Brian Prawitz said it is important that the process of determining how the money is spent be as transparent as possible.

“I think that’s the main thing going forward, and I know you do a good job with that,” he said.

Agreed to use about $18,000 from federal funding to replace money that is owed by the Downtown Roseburg Association as part of its contract to run the city’s parking program. That contract was cancelled in the spring of 2020, with the DRA owing $18,006.

Agreed to adopt updates to the city’s Total Maximum Daily Load Implementation Plan, which regulates the water quality of the South Umpqa River and Deer Creek. The Oregon Department of Environmental Quality required the city to update its implementation plan. It had last been updated more than a decade ago.

Approved a three-year contract with CarteGraph Systems, LLC , in the amount of $61,323 for asset management software licensing and maintenance.

Appointed Juliet Rutter to the Roseburg Library Commission to to replace Laura Harvey, who resigned on July 26. Rutter had previously held a position in the library as an aide.

Approved the Five Year Pavement Maintenance Plan for the city. The plan basically creates a work to-do list for pavement maintenance for the next five years, said Brice Perkins, public works director for the city.

The Douglas County COVID-19 Recovery Team reported the deaths of six county residents over the weekend.

There were 202 confirmed positive and presumptive cases reported Saturday, 84 Sunday and 137 Monday. As of Monday, 78 county residents were receiving hospital care due to the coronavirus, 65 locally and 13 out of the area. Two patients had to transported out of the state to receive specialized care.

Of those hospitalized locally, 12 were in intensive care and 12 were placed on ventilators. The recovery team reported that 69 of the 78 hospitalized were unvaccinated.

The Oregon Health Authority reported 4,701 positive and presumptive cases between Friday and Sunday, as well as 24 deaths. There were 937 Oregon residents hospitalized, including 253 in intensive care unit beds.