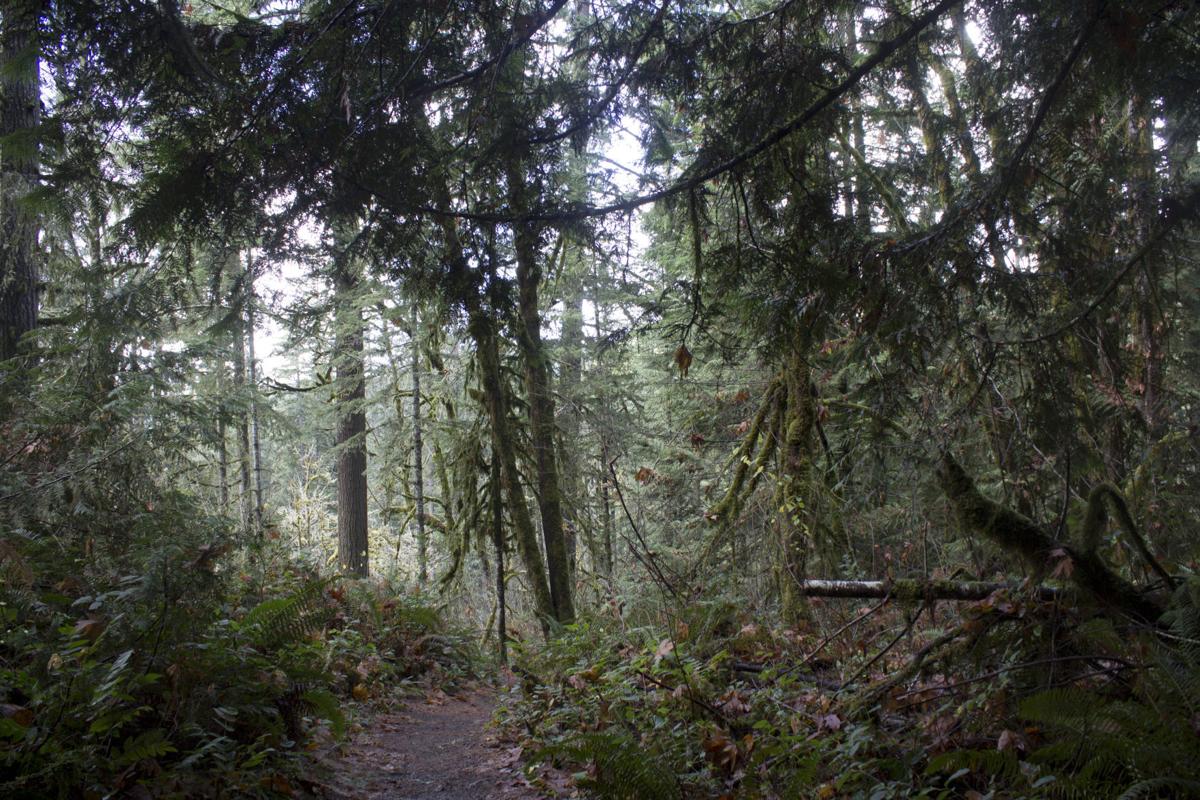 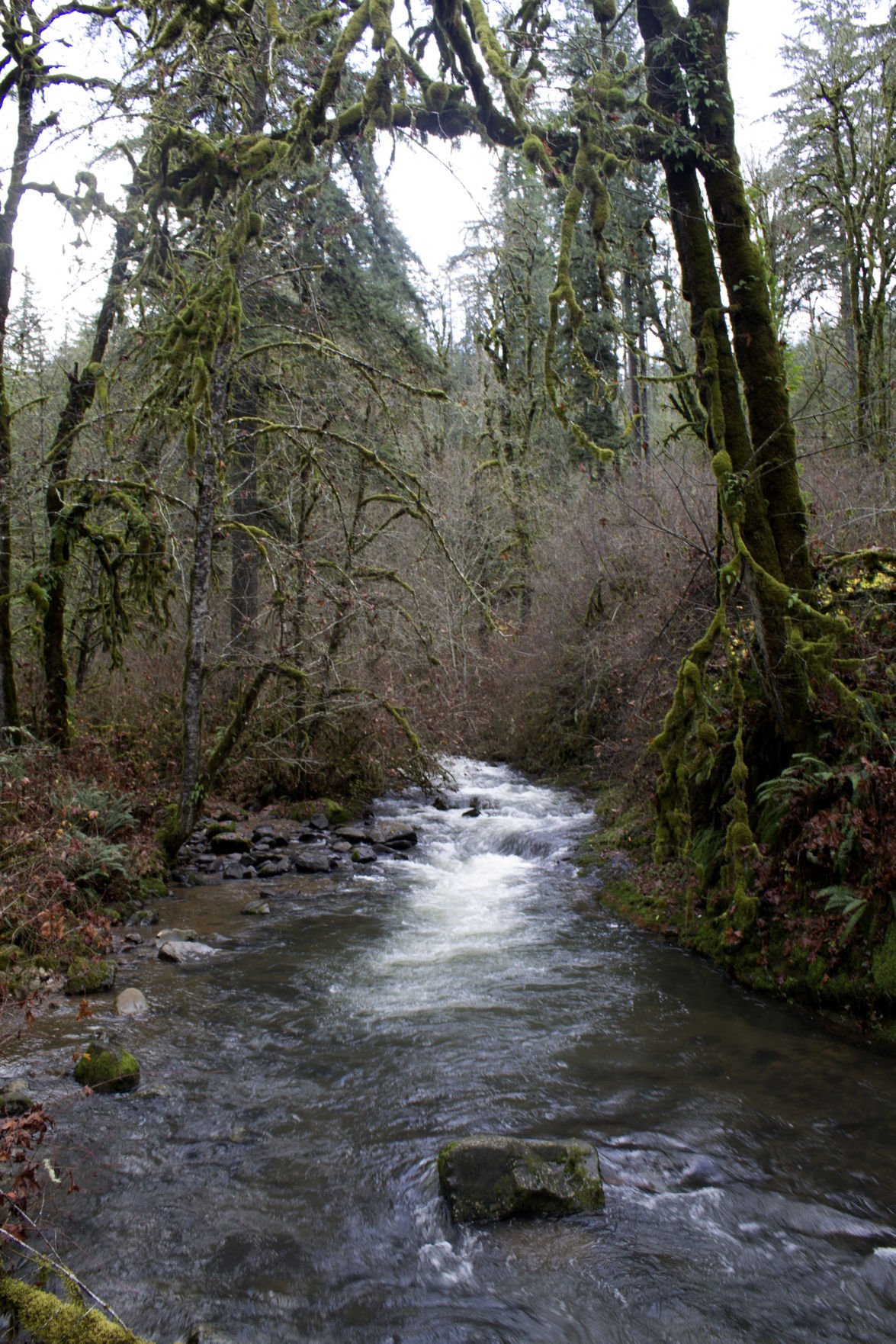 McDowell Creek tumbles over rocks and boulders as it rushes underneath bridges and past hikers. 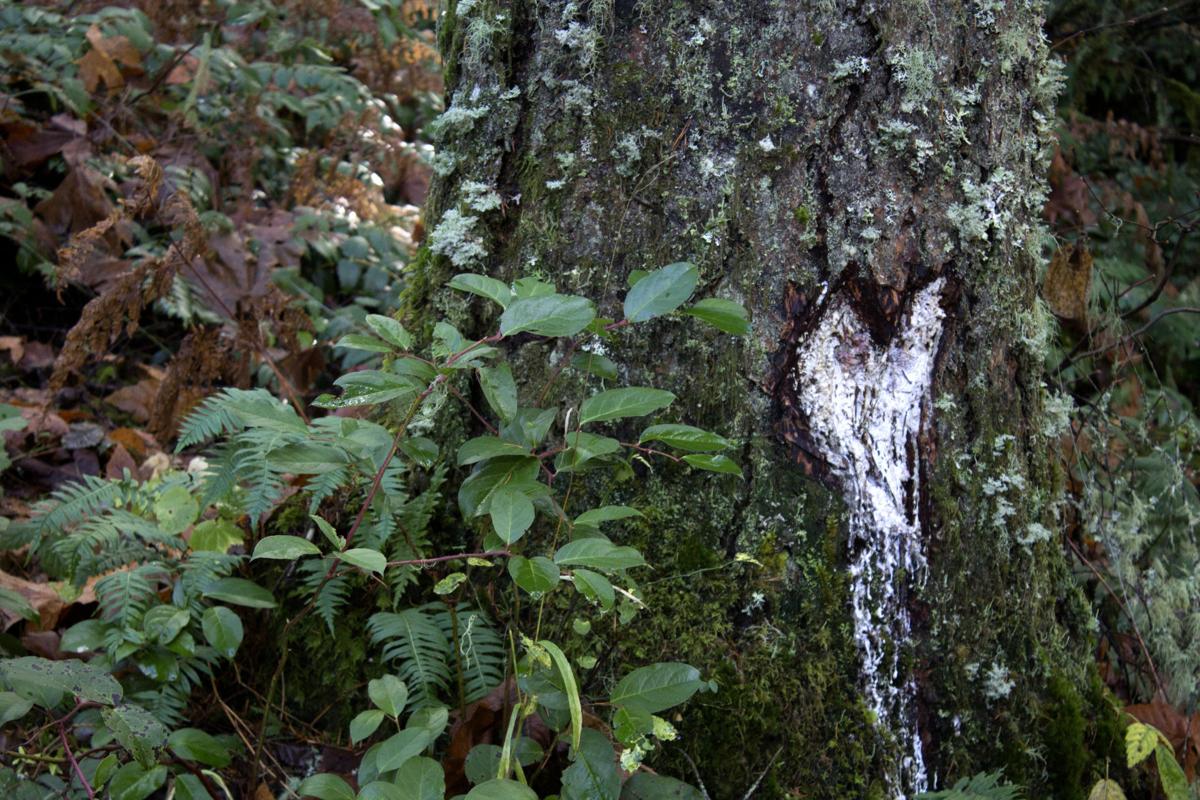 A heart carved into a tree along a hiking trail in McDowell Creek Park. 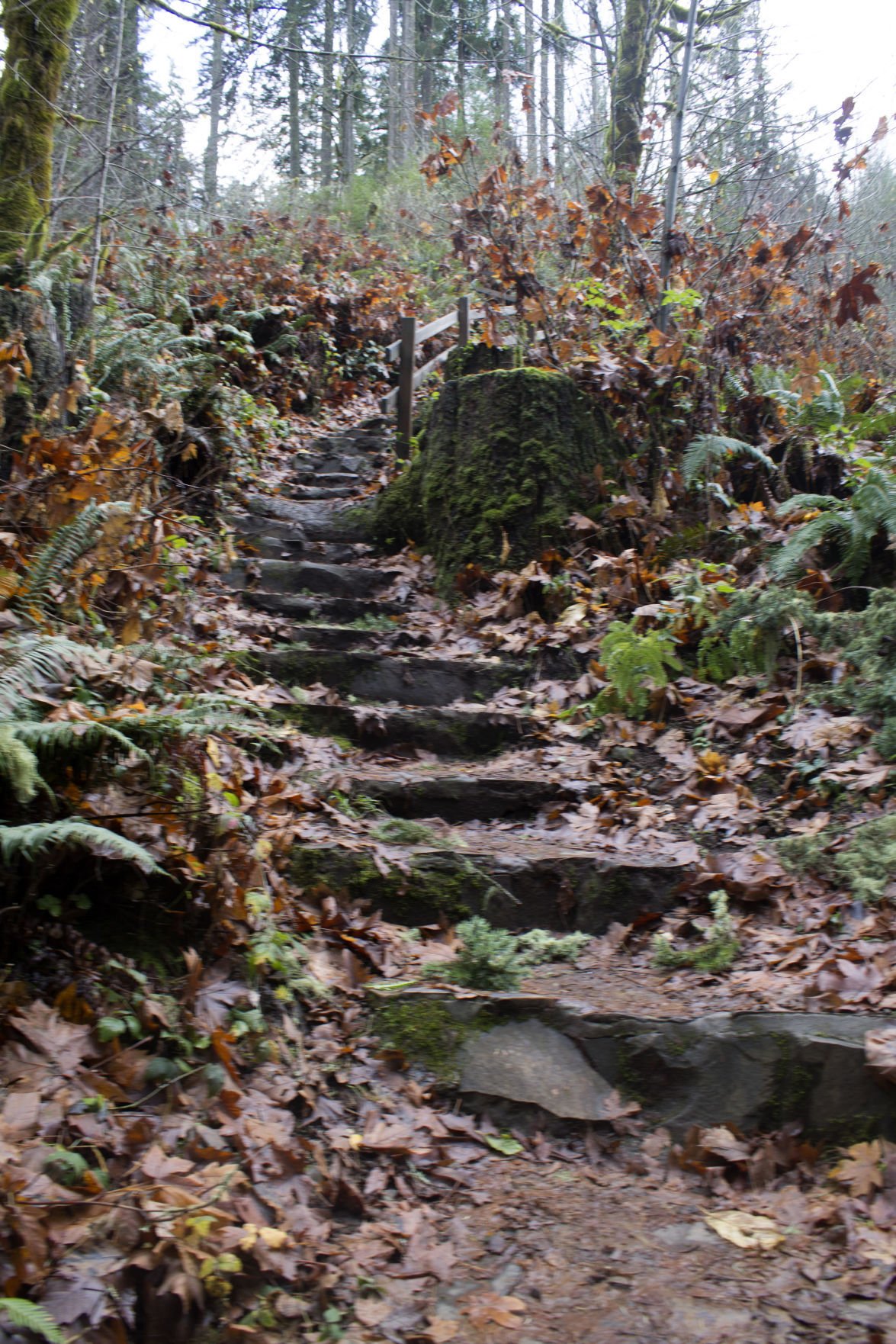 A lengthy, steep staircase leads hikers from the bottom of Royal Terrace Falls to a viewpoint at the top. 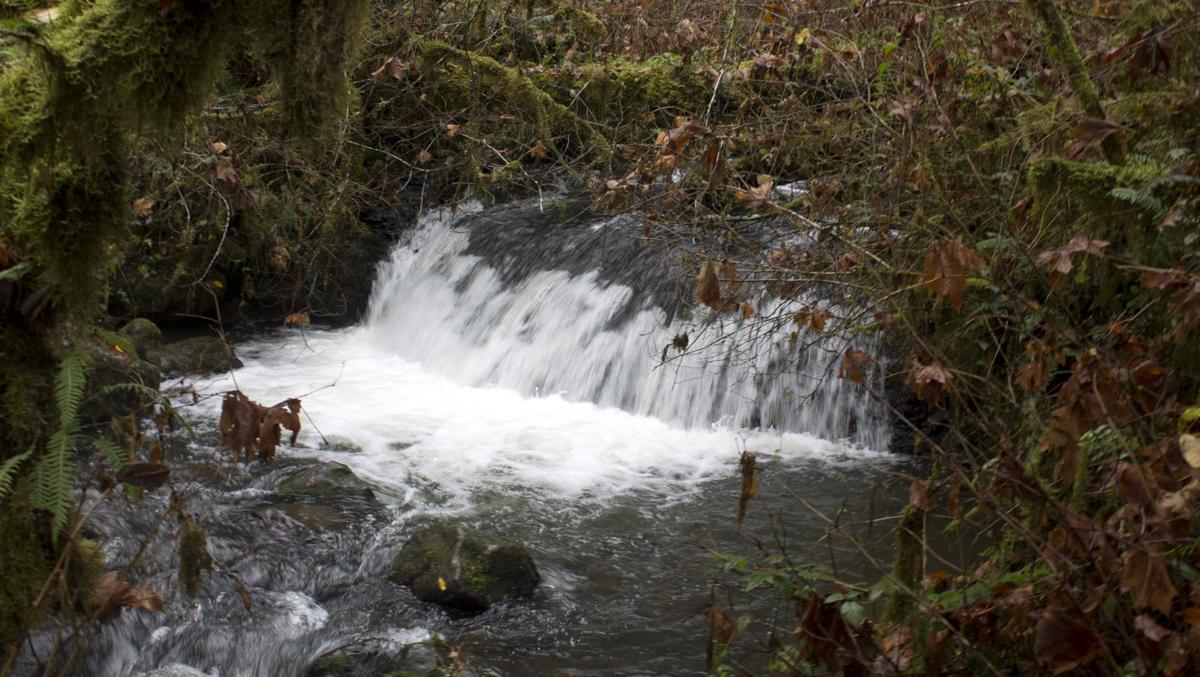 Lower McDowell Falls is a tiered waterfall, although the abundance of water made it appear as only one tier in late November. 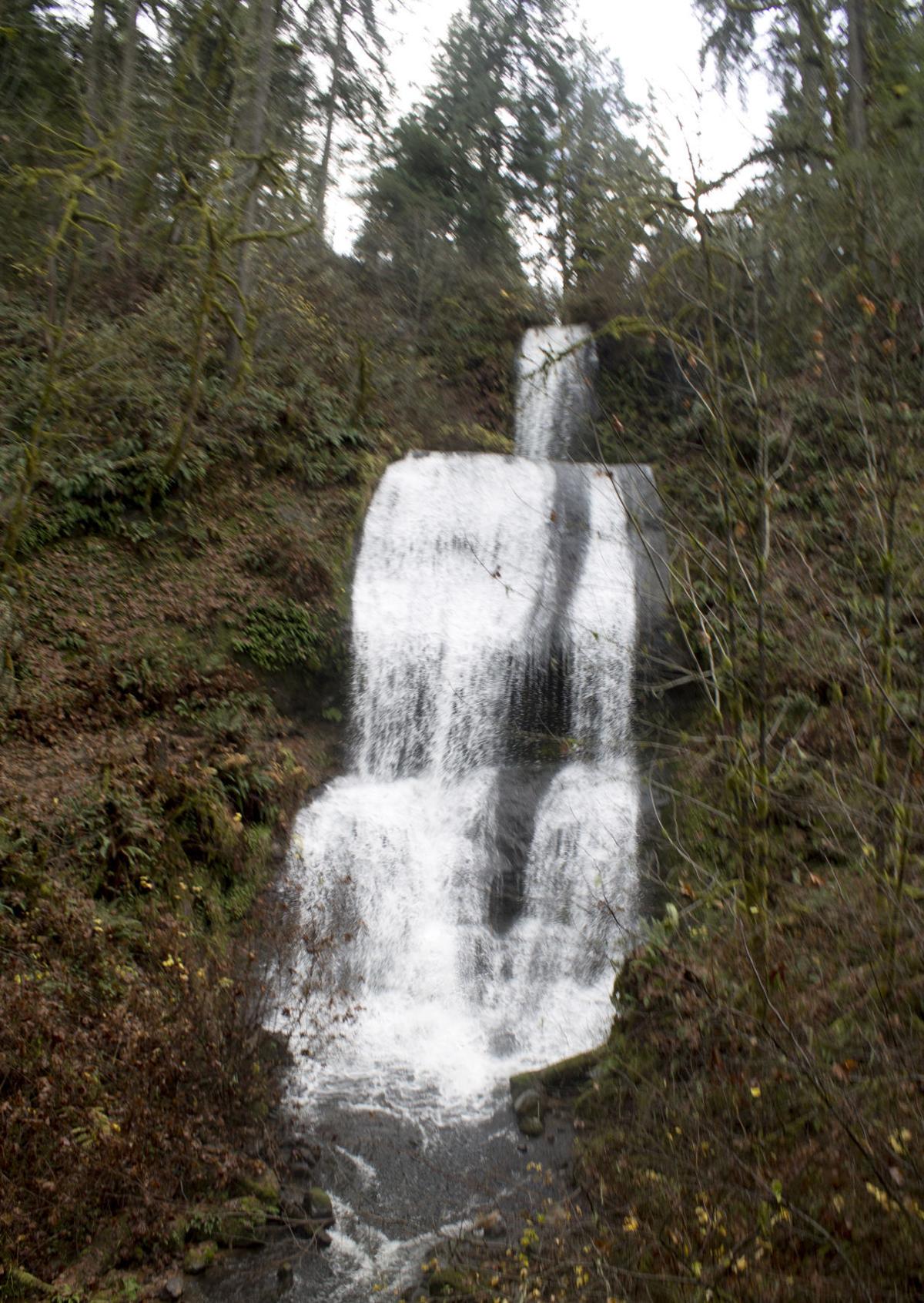 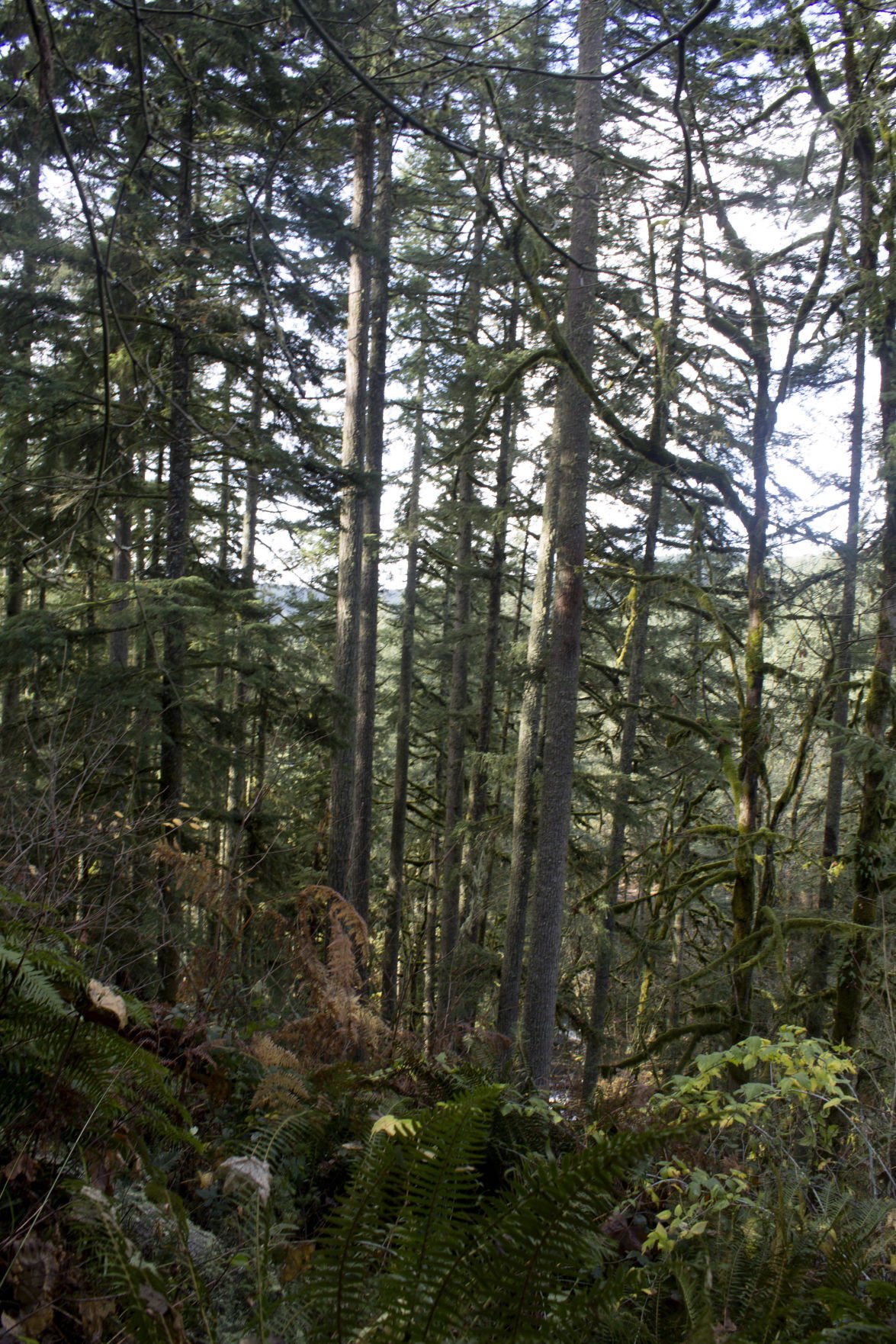 As you get to the top of Royal Terrace Falls you can look over parts of the valley. 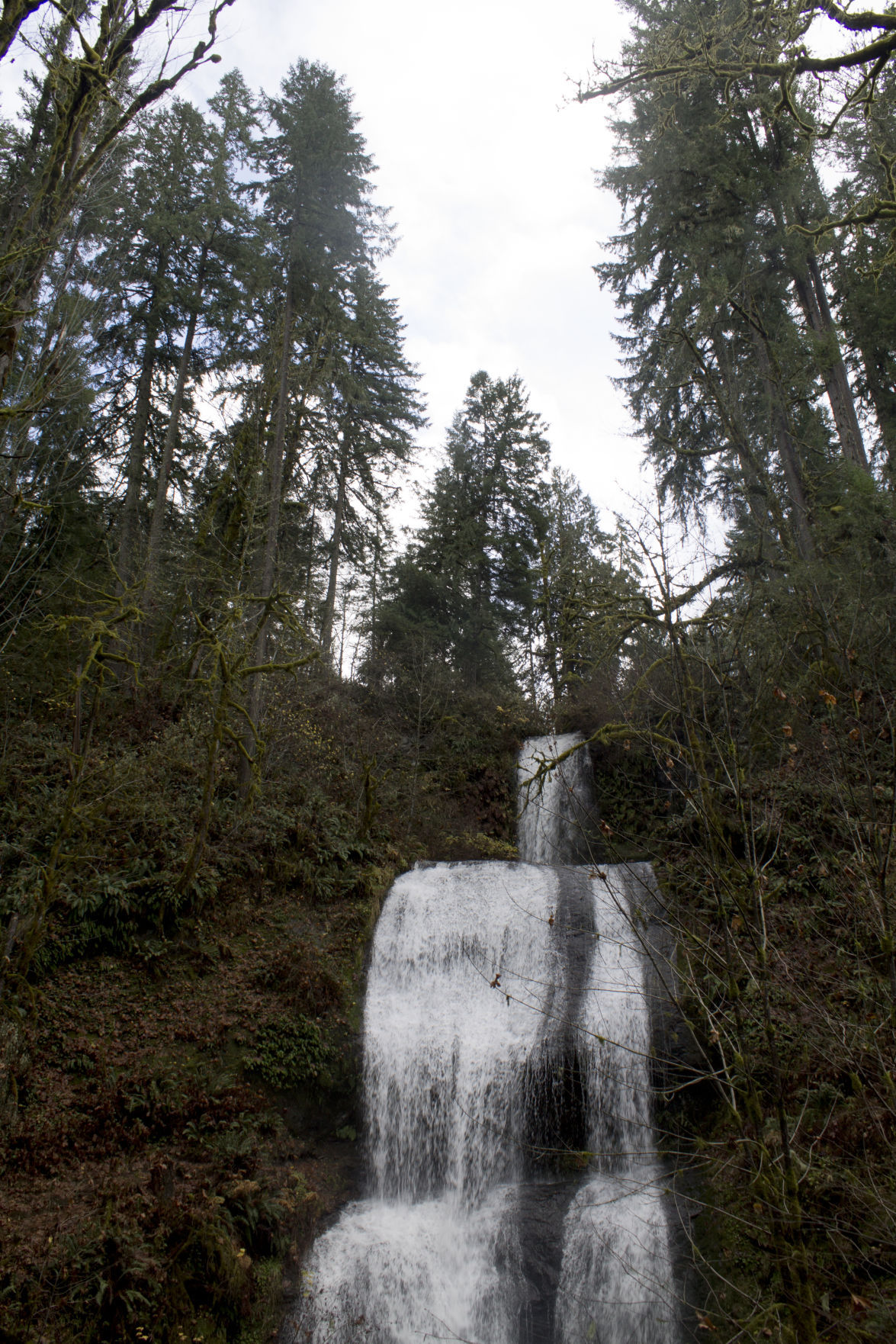 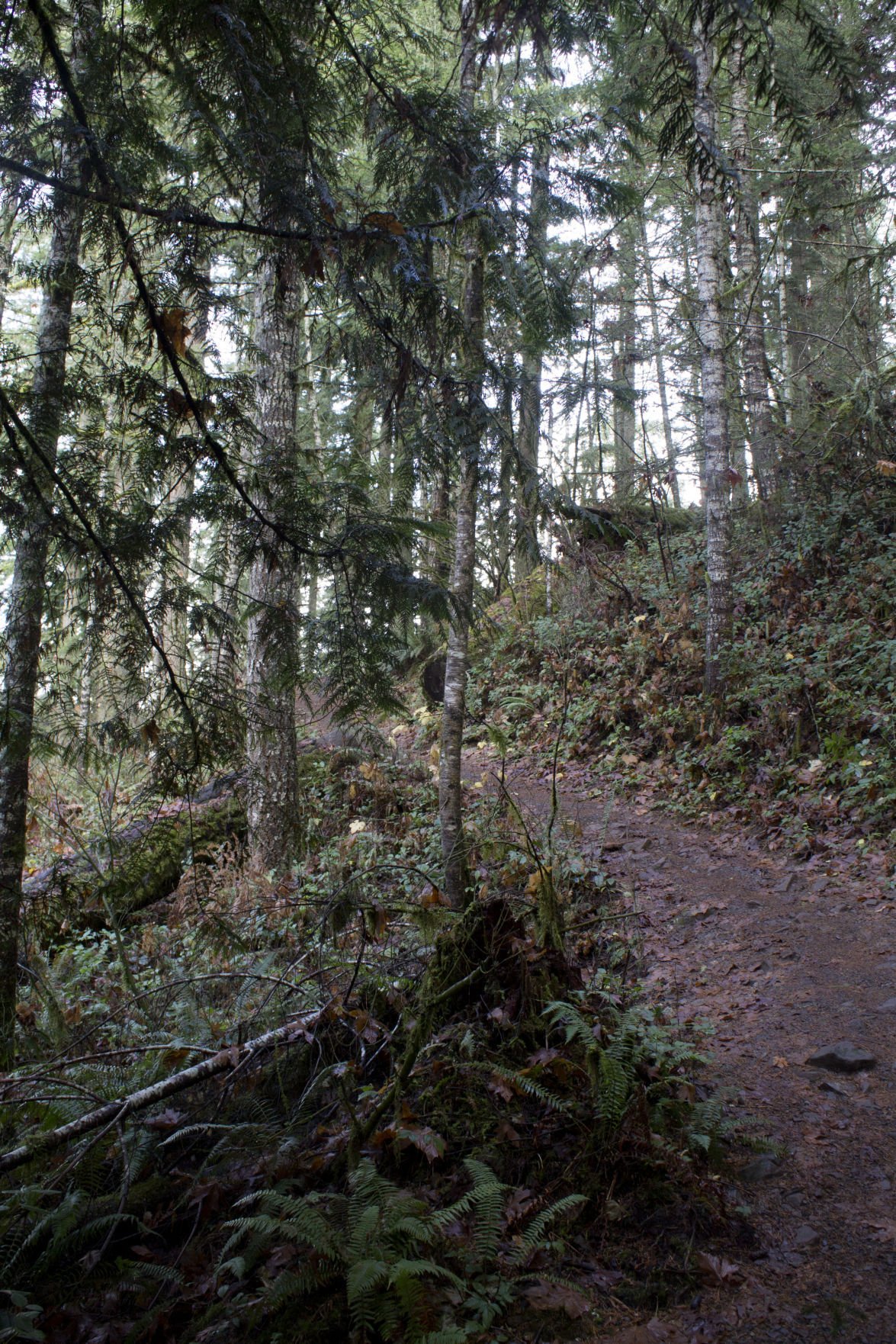 The path through McDowell Creek Park was anything but smooth. There were stairs, steep climbs and even hairpin turns on this trail.

McDowell Creek tumbles over rocks and boulders as it rushes underneath bridges and past hikers.

A heart carved into a tree along a hiking trail in McDowell Creek Park.

A lengthy, steep staircase leads hikers from the bottom of Royal Terrace Falls to a viewpoint at the top.

Lower McDowell Falls is a tiered waterfall, although the abundance of water made it appear as only one tier in late November.

As you get to the top of Royal Terrace Falls you can look over parts of the valley.

The path through McDowell Creek Park was anything but smooth. There were stairs, steep climbs and even hairpin turns on this trail.

As we looked for a hike somewhere between Salem and Roseburg, we quickly narrowed our choices to McDowell Creek County Park near Lebanon or Skinner’s Butte in Eugene.

We lived in Eugene for a number of years and have hiked up Skinner’s Butte numerous times, and as the day started foggy and a little wet, we decided to hike McDowell Creek County Park.

The description online said the trail is “a 1.6 mile moderately trafficked loop (...) that features a waterfall and is good for all skill levels.”

However, we ended up walking for 3 miles on a very steep trail that was not suitable for all skill levels.

But, it was beautiful.

We parked our car near the Lower McDowell Creek Falls, a small tiered waterfall, near the park’s exit. We continued up the trail and the creek moved swiftly next to us.

The forest was cloaked in all different hues of green and brown, as the mild weather had not yet caused all the leaves to fall off the trees.

Wildlife was all around us, with squirrels, birds and insects in plain sight even though we brought the dogs along.

Around a bend we saw Royal Terrace Falls, a 119-foot, three-tier waterfall, as a part of Fall Creek, a tributary of McDowell Creek.

A wooden bridge allowed us to see the waterfalls up close, but a sign near the bottom indicated that our trail would lead upwards.

I snapped some quick photos of the falls before making my way back to the trail that was said to lead to Majestic Falls.

The trail became a steep stone staircase that would lead to the top of Royal Terrace Falls.

This is the part that is definitely not suitable for any skill level, because some of the steps required climbing on my part, as they reached to my knees. The steps were uneven and challenging, but also were a welcome change from the usual trail.

Once we came to the top of the falls, a bridge led us across Fall Creek. The bridge was made of wood but had large gaps in the railing that didn’t make it feel safe to walk across.

I expected the trail to start moving downhill, or at least flatten out, but instead it seemed we would continue to climb just a little longer.

Normally I feel silly saying that I hike, but this was definitely a hike.

When we reached a tree with a white heart shape in it, we had reached the peak of our journey. From there we could see the valley through the trees.

Then it was time to descend down a narrow trail with steep embankments on either side.

When we came to a crossing, a sign said Majestic Falls was right while McDowell Creek was left.

I opted to head right and see how far away Majestic Falls would be before asking the husband to start hiking back up the hill. After a few minutes of a slow jog through the park, I came to McDowell Creek Road, a two-lane road, and decided to head back.

We turned left toward McDowell Creek and the trail continued to descend. At one point, needlepoint turns were put in place because of how steep the mountainside is.

A fallen tree near the bottom of the mountain created a natural staircase that was muddy and slippery. The humans were fine in this part, but the dogs decided to start playing and tumbled down the hill.

They had seemingly forgotten they were still very much attached to their humans via leash.

The leash was wrapped around my hand, and I couldn’t let go in time to let the dog go. The leash caused a nice burn mark in my skin, and a dog got the wind knocked out of her by her collar.

After a short break to let the dog catch her breath, check her out and make sure there was no permanent damage to her, or my hand, we continued on the trail, which quickly led us back to the road.

I know J.R.R. Tolkien once wrote, “Not all those who wander are lost,” but today the wandering had gotten me a little lost.

But there was nothing a little more wandering couldn’t solve.

Since this was the same road we came in on, we decided to follow the road for a little while. We stumbled upon another entrance —or exit— from the trail.

We followed it for a little while and it led us back to the tumbling McDowell Creek, a sure sign we were headed in the right direction.

But again, it would split, and I opted to go left while my husband went right.

My path led me back to the bridge near Royal Terrace Falls and onto the trail we had followed on the way there.

My husband’s path led back to the road, and he followed it until he got to the parking lot.

Mine was a little faster, but maybe next time we’ll bring the map along just in case.

We never did make it to Majestic Falls or Crystal Falls, which are both on the other side of McDowell Creek Road, but I wouldn’t count out a return here with the kids.

Making sense of a riotous world