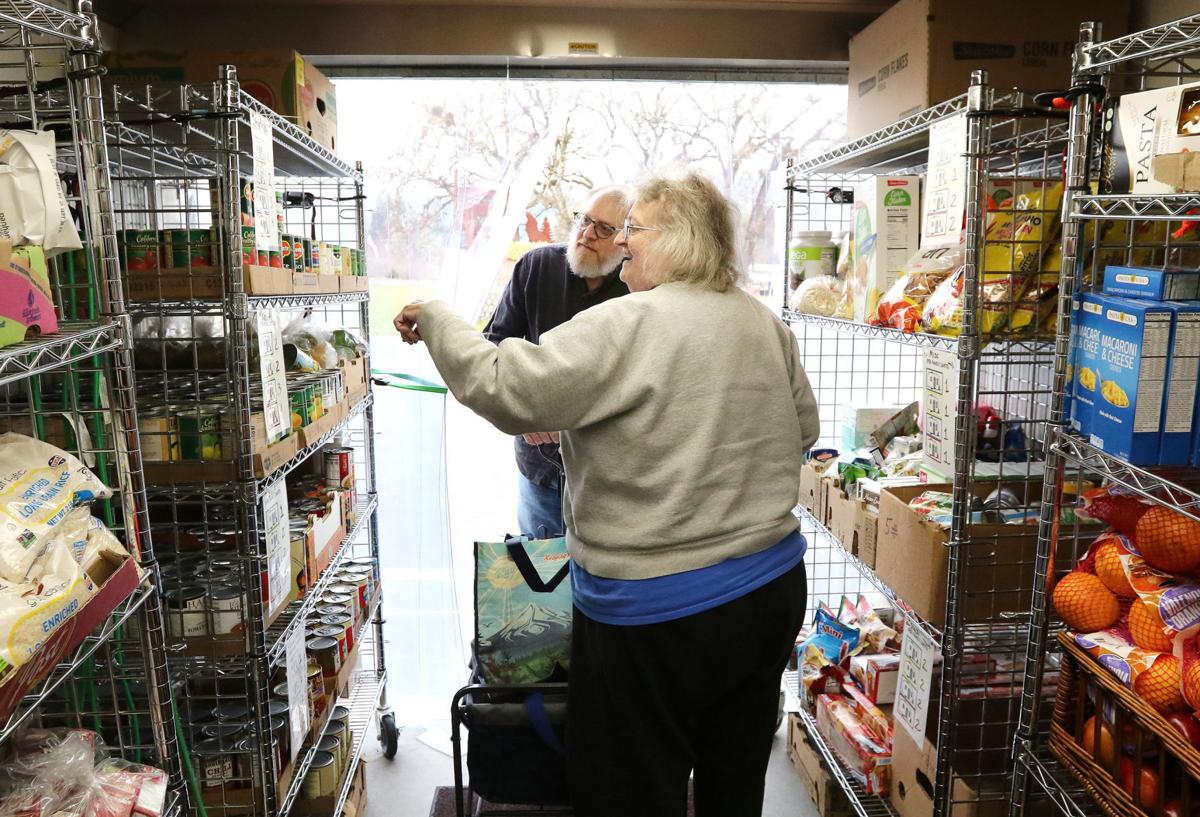 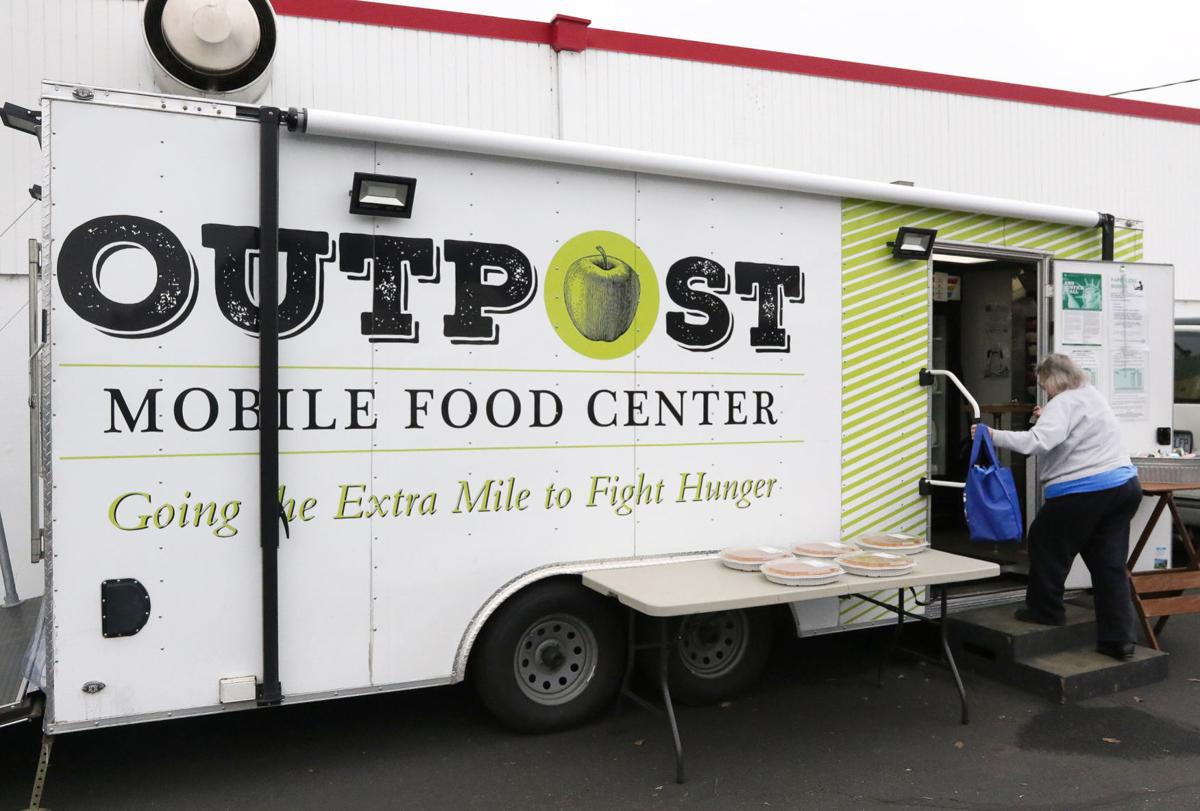 Boo Hooker of Milo steps into the Outpost Mobile Food Center in Days Creek on Wednesday. 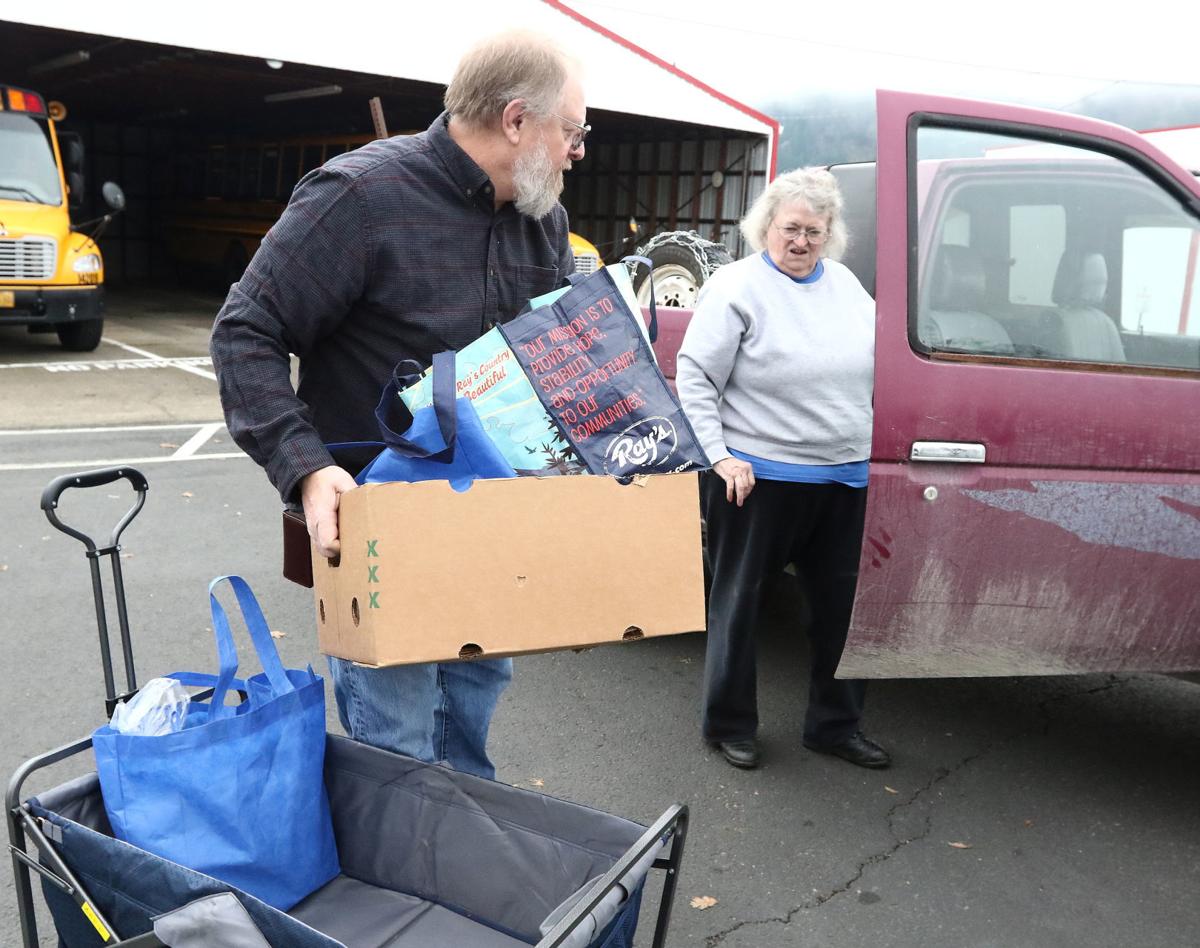 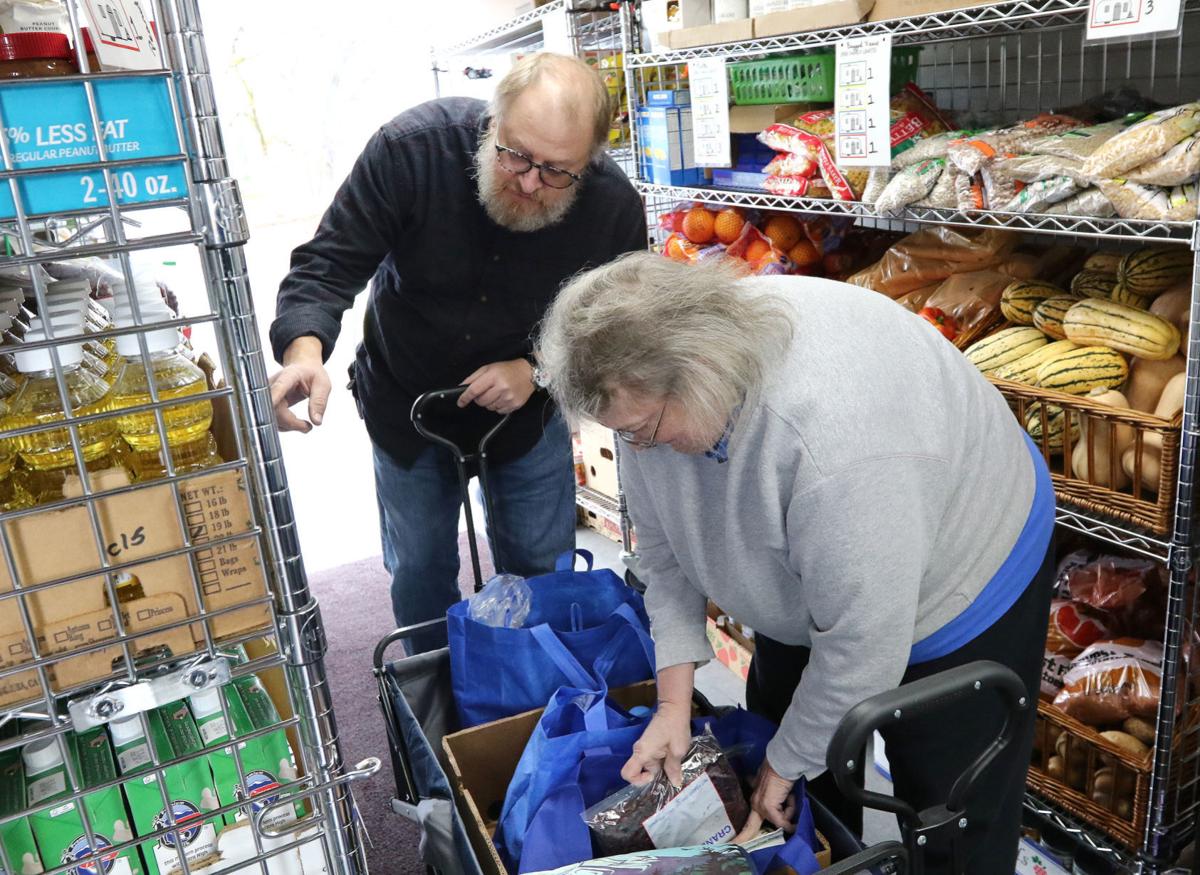 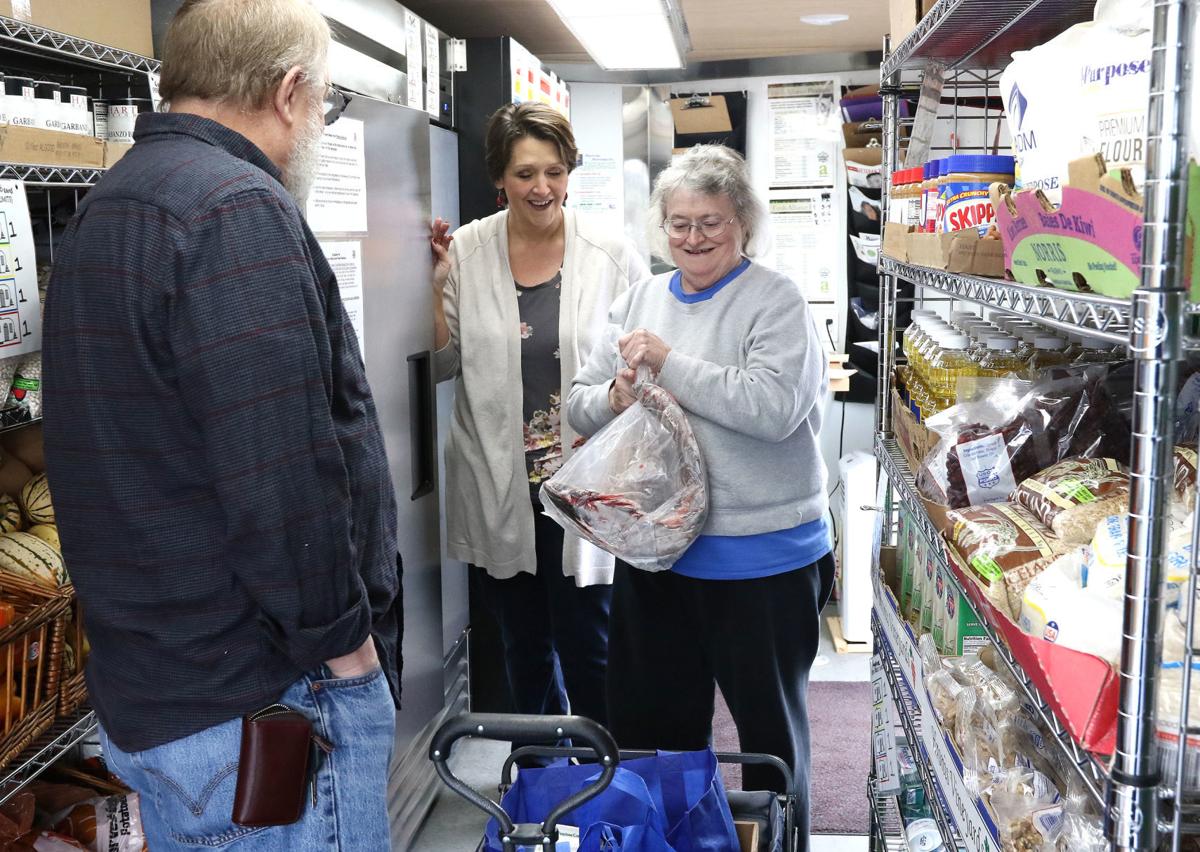 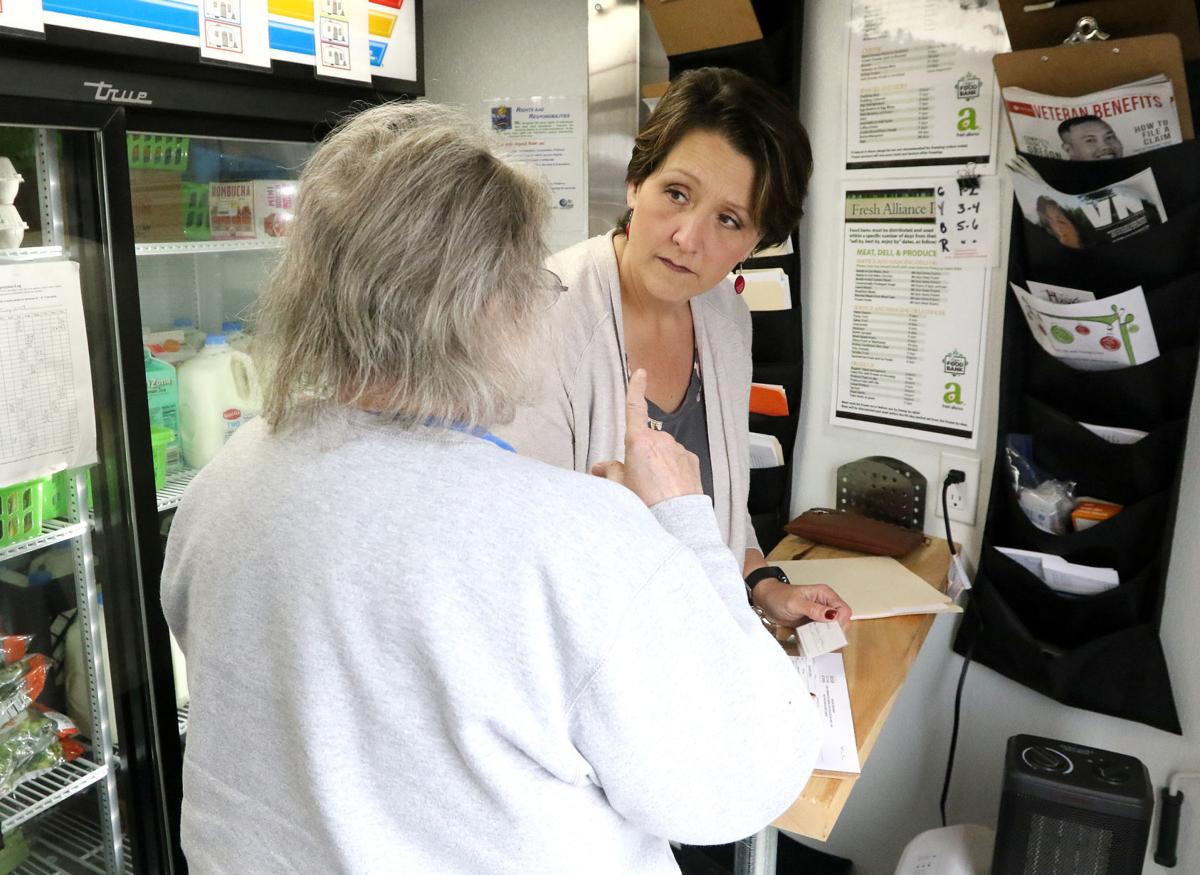 Boo Hooker of Milo steps into the Outpost Mobile Food Center in Days Creek on Wednesday.

It’s a chilly December morning as Teresa O’Sullivan pulls into the Dutch Bros. coffee kiosk on Northeast Garden Valley Boulevard, the barista greets her by name and starts on her order — Golden Eagle, super hot — before she can get a word out.

O’Sullivan takes the coffee, thanks the attendant with a smile and carefully pulls the “Outpost Mobile Food Center” trailer she is towing back into traffic before heading south on Interstate 5.

O’Sullivan has been a regular at this Dutch Bros. since May, when she started making the biweekly rounds delivering food to families in rural communities. Today she is headed to Days Creek. The day before she was in Elkton and the day before that Camas Valley. She also goes to Diamond Lake once a month, weather and road conditions permitting.

The mobile food pantry was launched this year by the United Community Action Network, thanks to funding by CommonSpirit Health, an affiliate of CHI Mercy Health. The goal is to help families in rural communities who struggle to get healthy food, especially fresh produce, said Sarah McGregor, food bank program manager at UCAN.

“Some of these communities really have no resources,” she said. “We do what we can to fill that void.”

The driving force behind the program is O’Sullivan. Most days she arrives at the UCAN food warehouse in Roseburg at 6 a.m. to begin what is largely a one-woman job. She typically won’t get home until the evening.

By now she has the routine down, although there is an occasional hiccup or two — a recent trip to Diamond Lake was cancelled at the last minute due to snow, for example. But O’Sullivan will be the first to admit she had a big learning curve.

When she interviewed for the job, among the first questions she was asked were: Can you drive a trailer? Can you back one up?

“I said I’ll learn,” O’Sullivan remembers. Her husband, Michael P. O’Sullivan, helped her practice on a flat trailer owned by the family.

O’Sullivan spent considerable time figuring out how the 20-foot trailer works and making necessary tweaks. The generator that powers the fridge and freezer was too small and had to be replaced; a canopy was added to protect people and produce from the harsh summer sun; the shelving inside the trailer was revamped to provide more storage; a small air conditioner was installed to counter the sweltering summer heat.

She also visited pantries in Riddle, Myrtle Creek, Reedsport, Winston and elsewhere to see how they operated.

“I took a lot of pictures and did a lot of talking,” O’Sullivan said.

She is persuasive, especially when it comes to the Outpost. She convinced a Grocery Outlet to hold a food drive that brought in 1,000 pounds of food. A 4H club in Riddle and a handful of volunteers also help out.

When O’Sullivan was told she needed the approval of the local school board to allow her to set up the mobile pantry in the parking lot of the Days Creek school, she went before the board to make her case.

“They said, ‘We have a lot of hungry kids here. If they’re hungry and they come to you, what will you do?’” O’Sullivan recalls. “I said ‘I’ll feed them, even if that means I purchase my own stuff and bring it.’”

‘See you in two weeks’

She goes to Days Creek every other Wednesday, handing out food from 1 p.m. to 3 p.m. She is often accompanied by Jim Whatley, who lives in Myrtle Creek and volunteers at the Days Creek pantry.

On this day O’Sullivan arrives around noon and quickly gets to work. She fires up the generator and fills it with gas. She unlocks the refrigerator, freezer and shelves that store the food. She sets four chairs up outside the pantry so people can be comfortable while they wait, and three shopping baskets on wheels to help them get their food to their vehicles.

O’Sullivan also puts out a basket full of granola bars and other snacks for the students. Soon a gaggle of them descend on the basket and pick through it as they laugh and chatter. The idea is to reduce the stigma associated with the pantry and get students comfortable asking for help, O’Sullivan later explains.

A couple of cars pull into the parking lot, then a couple more. A handful of people approach the trailer and Sullivan greets them all by name. They sign in and begin selecting their food.

“It’s just now 1 o’clock,” O’Sullivan said. “We’re not even supposed to be open for business.”

Inside the trailer the selection of food is varied and abundant. There are pork loins, hamburgers and other frozen meats; an assortment of breads; fruit, vegetables, potatoes and squash; dry goods like beans, rice, pasta and flour; peanut butter and jelly; cooking oil; dried cranberries.

There are also a dozen or so fresh frozen salmon, courtesy of the Oregon Department of Fish and Wildlife, and large pumpkin pies left over from Thanksgiving.

O’Sullivan and Whatley work as a team. Both gently guide people through the trailer, make small talk about their families, help them choose their food. Whatley helps people load the items into their vehicles.

“We’ll see you in two weeks,” he tells them.

Martha “Boo” Hooker has been coming to the Days Creek mobile pantry since it opened. But her involvement pre-dates that. Hooker, who graduated from Days Creek school in 1975 and still volunteers at the concession stand during games, spoke to the school board in support of the pantry when it was still just a proposal.

She lives 11 miles from the school, which is a bit of a drive but much better than the 50 miles she would otherwise go to shop in Roseburg.

“People don’t want to have to choose between buying food and putting gas in the tank,” Hooker, 63, said. “You only get so much in your paycheck and sometimes at the end of the month there isn’t much there.”

Pam Kendall, who lives with her son and grandson, said the family gets help with food stamps. But that food only lasts about three weeks, and the mobile pantry helps tide them over.

“We’d be scrimping the last couple of weeks without this,” she said.

And so it goes for the next two hours as more than a dozen people, each representing a household, show up for assistance.

Ed and Fanny Swope said they saw a flier for the Outpost pantry in the local post office. The couple is retired and lives on a fixed income, and like several others who come for food said the local stores are too expensive for them.

A woman called the pantry “a lifeline,” but declined to give her name. “I don’t have transportation so I need to sneak everywhere,” she said.

Another woman has lived in a trailer along the river, without power and off the grid, for four years. On Thanksgiving she cooked a turkey on top of her wood burning stove.

O’Sullivan talks with all of them as if they were longtime friends. She gets to know the people she helps intimately. The woman who home schools her four children; the veteran who has cancer and struggles financially because of his medical costs; the woman who lost her brother recently and had to visit his son in prison and deliver the news.

“They share so much of their life with you, they don’t just come for food,” O’Sullivan said. “That’s what my job is really about, building relationships.”

Giving back is nothing new for O’Sullivan. She and her husband created and ran an annual free Thanksgiving dinner, serving more than 350 people each year, for more than a decade before handing it off. For the past nine years the O’Sullivans, who have three adult children and will celebrate their 30th anniversary in April, have been pastors of Family Fellowship in Myrtle Creek.

“Me and my husband talk about leaving people in better shape than we found them,” O’Sullivan said.

Toward that end she has most recently set her sights on helping people in the Diamond Lake area. A few months ago someone at a food pantry in Glide told O’Sullivan that there was a dire need for food assistance in Diamond Lake. She made some calls and soon had permission to set the Outpost pantry up once a month at the Diamond Lake Gas Station.

Her first trip there was in late September; she served 28 families.

“I was overwhelmed by how many people came that day,” O’Sullivan said. “They just kept coming and coming.”

In addition to food help there is a big need for affordable dental care in Diamond Lake, she said. To fill that need O’Sullivan hopes to start a dental van, and is looking for dentists willing to donate their time.

In the meantime she’ll keep up her grueling schedule, helping hundreds of families by handing out food, smiles and a shoulder to lean on one person at a time.

“I do this because I truly love people and the one-on-one interaction. People need to know that they aren’t alone, that we’ve all been in a season where we have needed help,” O’Sullivan said. “I also get to be a part of their lives in a small way. I enjoy the stories that come through, the hugs as they need one and an ear to just listen. Plus so much more.”

Thank you, News Review for writing an extensive article about this and featuring Days Creek.