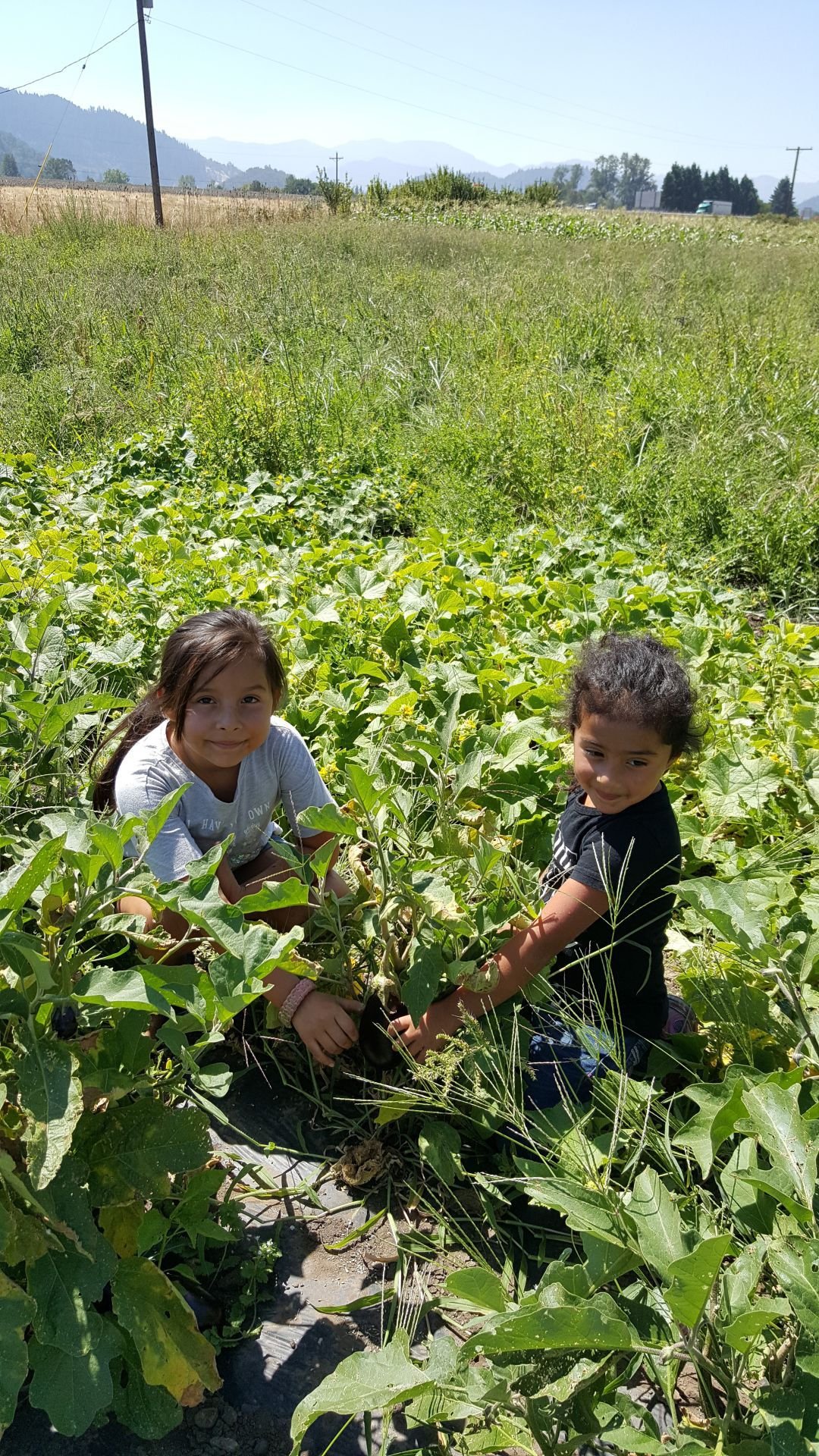 Katalina and Mayte Valadez show off their eggplant in anticipation of their mother making Eggplant Sliders. 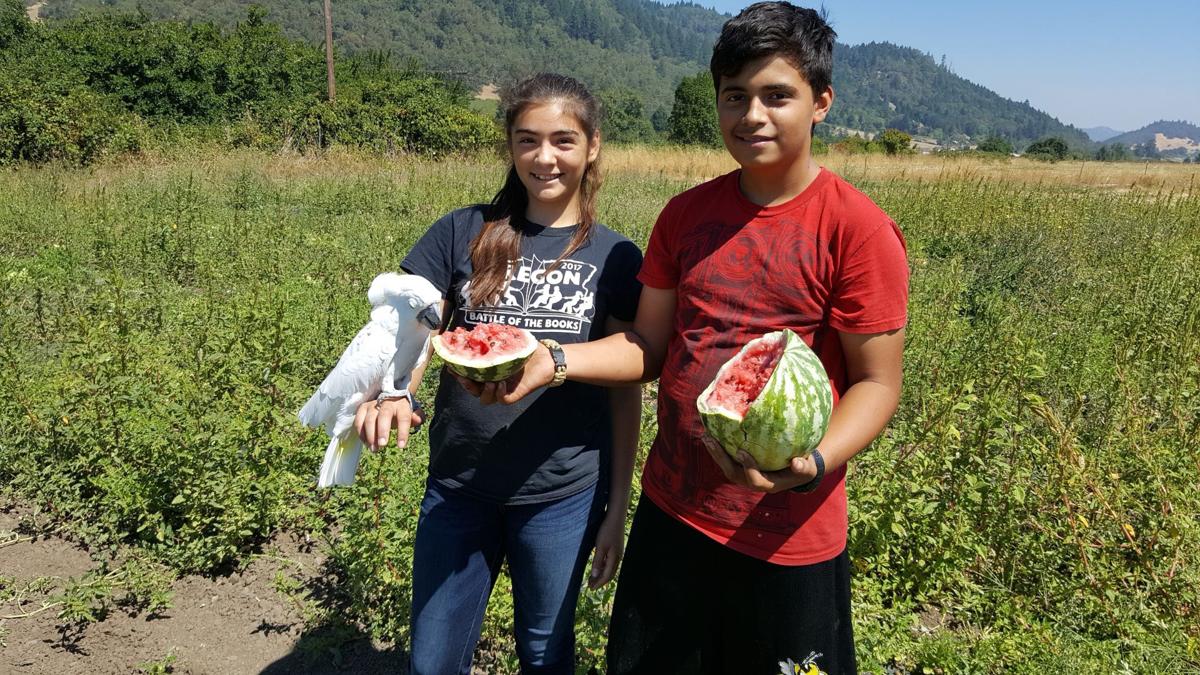 Mariyah and Buddy Valadez with Chief Watermelon Tester, Tootie, who approved. Buddy prides himself on his ability to pick the best melons. 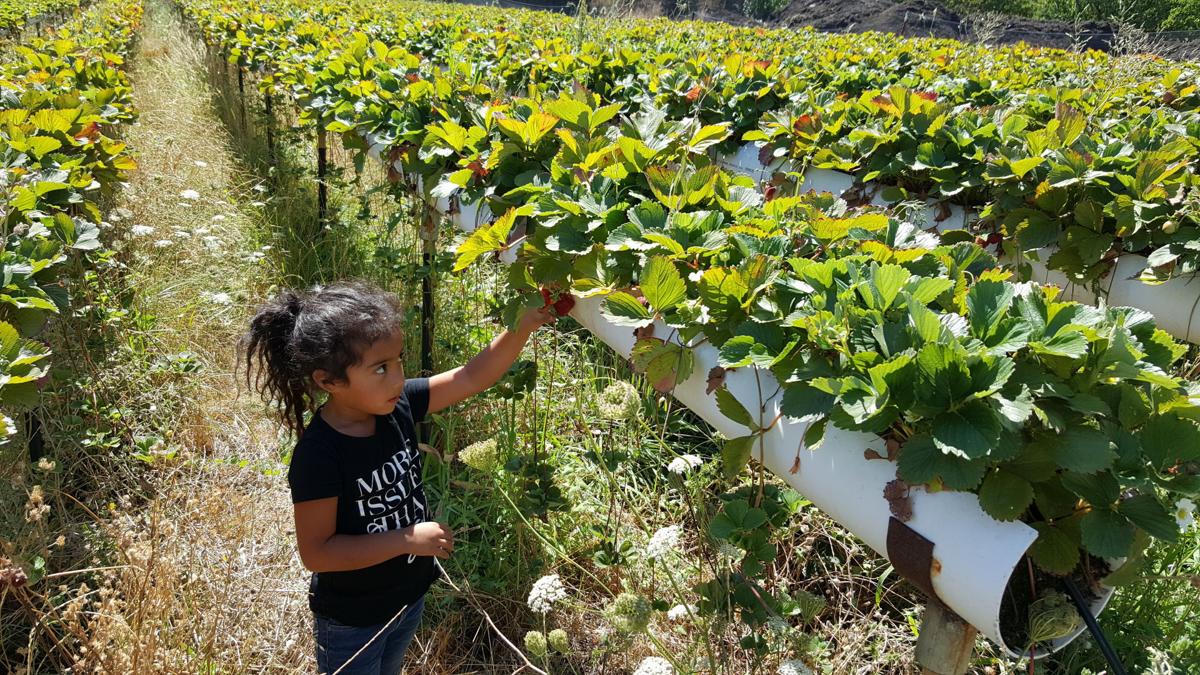 Mayte Valadez finds picking strawberries an easy job since the berries are grown in long pipes up off of the ground.

Katalina and Mayte Valadez show off their eggplant in anticipation of their mother making Eggplant Sliders.

Mariyah and Buddy Valadez with Chief Watermelon Tester, Tootie, who approved. Buddy prides himself on his ability to pick the best melons.

Mayte Valadez finds picking strawberries an easy job since the berries are grown in long pipes up off of the ground.

Walking down the dusty road along the produce field near Myrtle Creek, one of the first things I noticed were all the different sized footprints. They range from tiny, preschool-sized ones up to teenage, and then adult. This tells the story of the Valadez family; they work hard to make a living on their organic farm, and they do it as a family.

With Juan doing the tractor work, and Lucy selling at two area farmers markets, their five children are fully involved in everything in between. The youngest, twins Mayte and Jozef, and Katalina help plant, weed and harvest and do a lot of giggling and occasional tossing of well-aimed produce while picking.

Teenagers Buddy and Mariyah alternate weeks helping their mom at the farmers markets and will be helping at the roadside stand that will open soon. Lucy beams with pride as her two oldest take care of business, answering questions from customers, making change and offering advice on which melon is the best choice, what variety of corn they’re offering or explaining the difference in peppers.

As the only certified organic vendor at the Umpqua Valley Farmers Market, Lucy says she does her best to explain the whole “organic” idea because people need to know why organic costs a little more. Seeds have to be certified organic, which tends to limit varieties in some things.

Records must be kept accurately as to where the seed came from, when it was planted, when it was harvested, what fertilizer was used and when and how it was applied. Well water and irrigation water drawn from the South Umpqua River must be tested. Inspections are costly, with yearly recertification costing from $500 to $1,000.

Compost has to be held for two years before use, no manure is used and any farm animals have to be kept a certain distance from the growing area. Strawberries have to be in the ground for two years before the berries can be sold as “organic.” The greenhouses, where Valadez Organic Produce start all of their own seedlings, require separate certification. Obviously, growing certified organic is only feasible if you’re in it for the long haul, which Lucy and her family are.

Currently, summer crops are being harvested, and fall crops are being planted. While the Valadez family grows the usual variety of summer produce, melons—specifically, watermelons—are their crown jewel. Buddy, known to the family and customers as “The Watermelon Whisperer,” can tell you more than you probably want to know about his melons, but mainly, how to pick a good one! After all, what else do you really need to know?

There are five varieties available, plus several kinds of cantaloupes and crenshaws. “People who only get grocery store melons don’t even know what they’re missing!” Buddy says proudly. “And you have to have a seeded melon for the best flavor. Seedless melons can’t compare.”

Tuesdays and Thursdays are harvest days, so while Lucy makes estimates of how much to pick for each farmers market, the kids start picking and loading into boxes and totes, which spend the night in the walk-in cooler, ready to be loaded in the morning.

It was interesting to see some odd-looking plants in one of the hoop houses: lemon trees, lime trees and papayas! Juan, according to his wife, wants to grow everything! A patch of asparagus is dormant in a corner of the yard, and a small grove of cactus threatens if you get too close. Nopalitos, the fleshy cactus pads, can be harvested and cooked for traditional Mexican food or pickled.

Naturally, the conversation got around to cooking and eating. You’ll find several recipes that grace the Valadez table regularly, all with the approval of the kids. Lucy says her idea about kids eating vegetables is simple: “We grow it, and we eat it! We eat it out in the field when we’re picking, and we eat it at the table. The kids have seen the seeds pop out of the ground, we’ve all worked at weeding and harvesting and we all enjoy what we grew.”

As to the future of Valadez Organic Produce, Juan says, simply, “More!” They would like to farm more land and have a good-sized produce stand that would be open earlier and later in the season, and they would like to find another farmers market, possibly along the coast.

You can load up on Valadez Organic Produce on Saturdays at the Umpqua Valley Farmers Market at the Methodist Church on Harvard. You might even find some rolls for those Eggplant Sliders!

Sliced or diced jalapenos, amount is up to your tolerance!

2 cups half and half

Brown sausage, transfer to a stockpot. Saute onion and jalapenos and add to pot. Quarter potatoes and slice about ¼ inch thick, add to pot. Add chicken stock and water and cook over medium low heat until potatoes are tender, and then add kale and cook for 5 to 10 minutes. Add half and half and heat through. Add salt and pepper to taste.

Slice eggplant 1/3 inch thick, dip in beaten eggs, and then crumbs and fry in skillet  (You’ll need oil, and you’ll have to add a little more as you go because the eggplant likes oil!). Drain on paper towels.  Put a slice of a good-sized, perfectly ripe tomato on one half of the slider roll, top with a slice of mozzarella (preferably fresh), and then top with a slice of eggplant. Use a little mayo, if you must.

Proportions are up to the cook on this one!

The color of the month: Red

Unique and useful knowledge packed in this article. I am very happy to see your article font and well written article. buy gym mats direct from UK

I always like to read stuff related to agriculture and farming on the internet. This website contains a large collection of information related to farming. The topic of this post is very interesting which is about farm to fork. It really increases our knowledge.
Heavy duty tarpaulins

I always like to read stuff related to agriculture and farming on the internet. This website contains a large collection of information related to farming. The topic of this post is very interesting which is about farm to fork. It really increases our knowledge.
Heavy duty tarpaulins

Its a very good post i feel very happy to see this blog really too good there are many things will be provided for this blog. if you want any essay related papers feel free to surf best essay writing service.