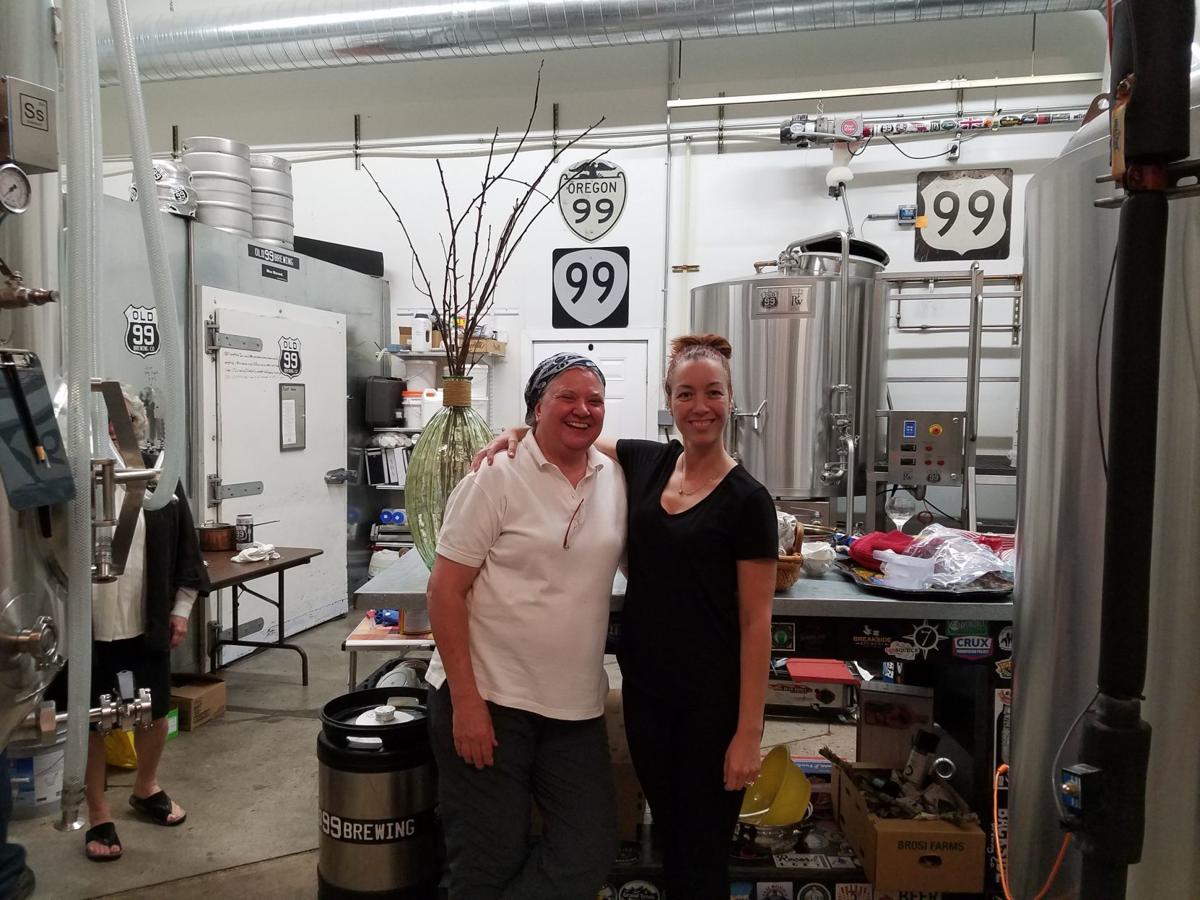 Chefs Devey Michaels, right, and assistant Diane Griffin pose for a photo near the conclusion of their “Night Circus” dinner at Old 99 Brewing Co. in Roseburg on Sunday night. 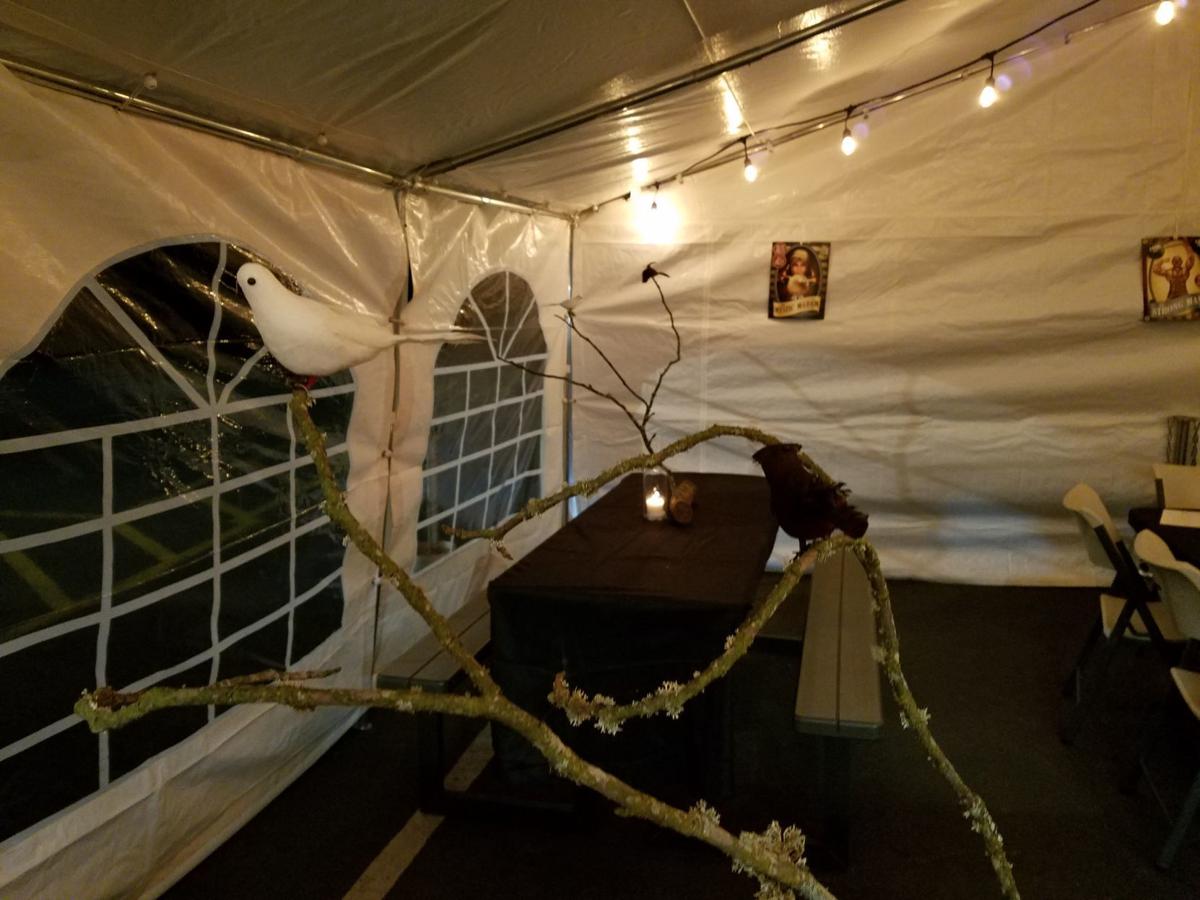 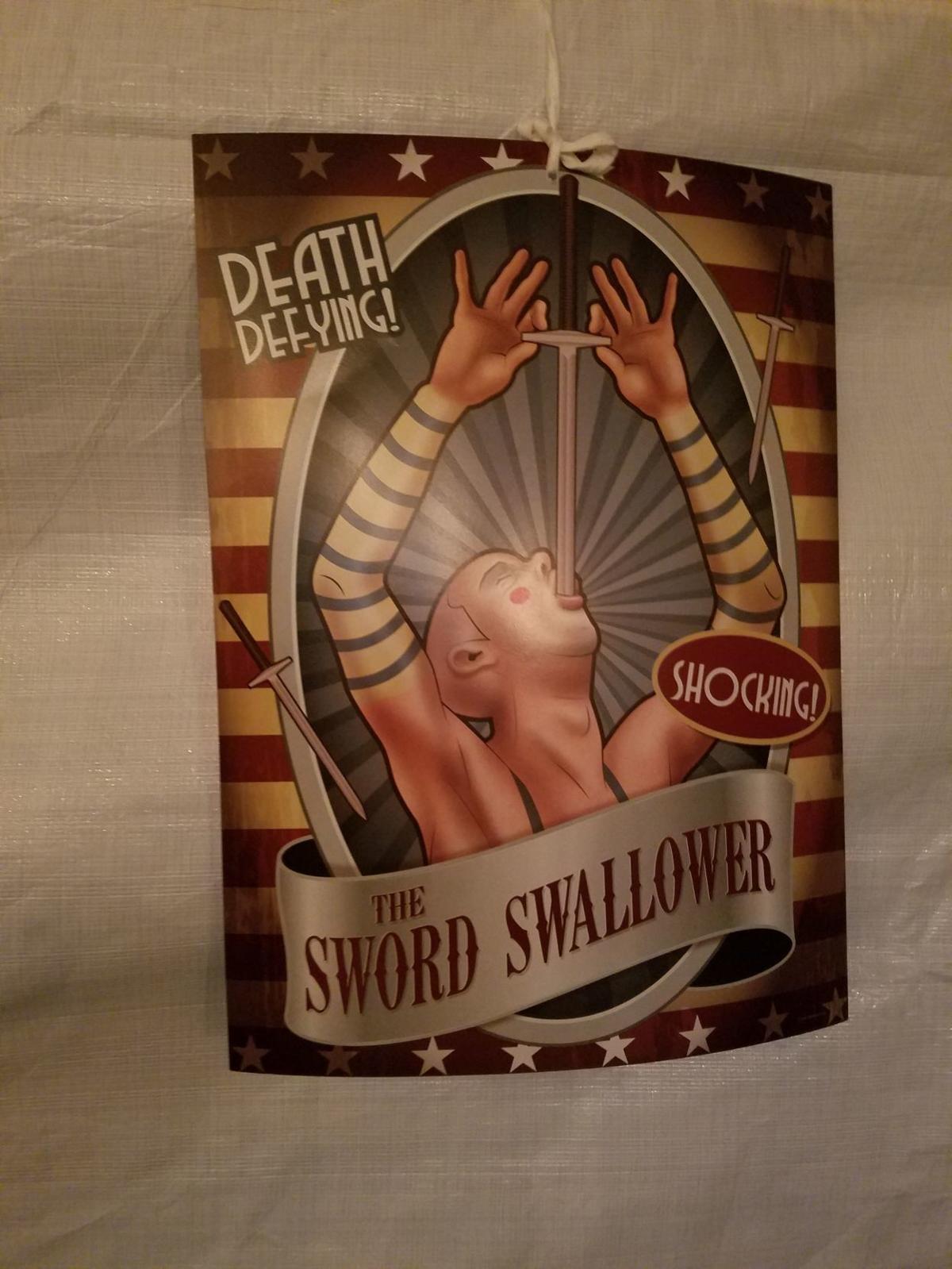 A small poster advertises a sword swallower at the “Night Circus” dinner at Old 99 Brewing Co. on Sunday. Though the dinner was circus-themed, there was no actual sword swallowing. 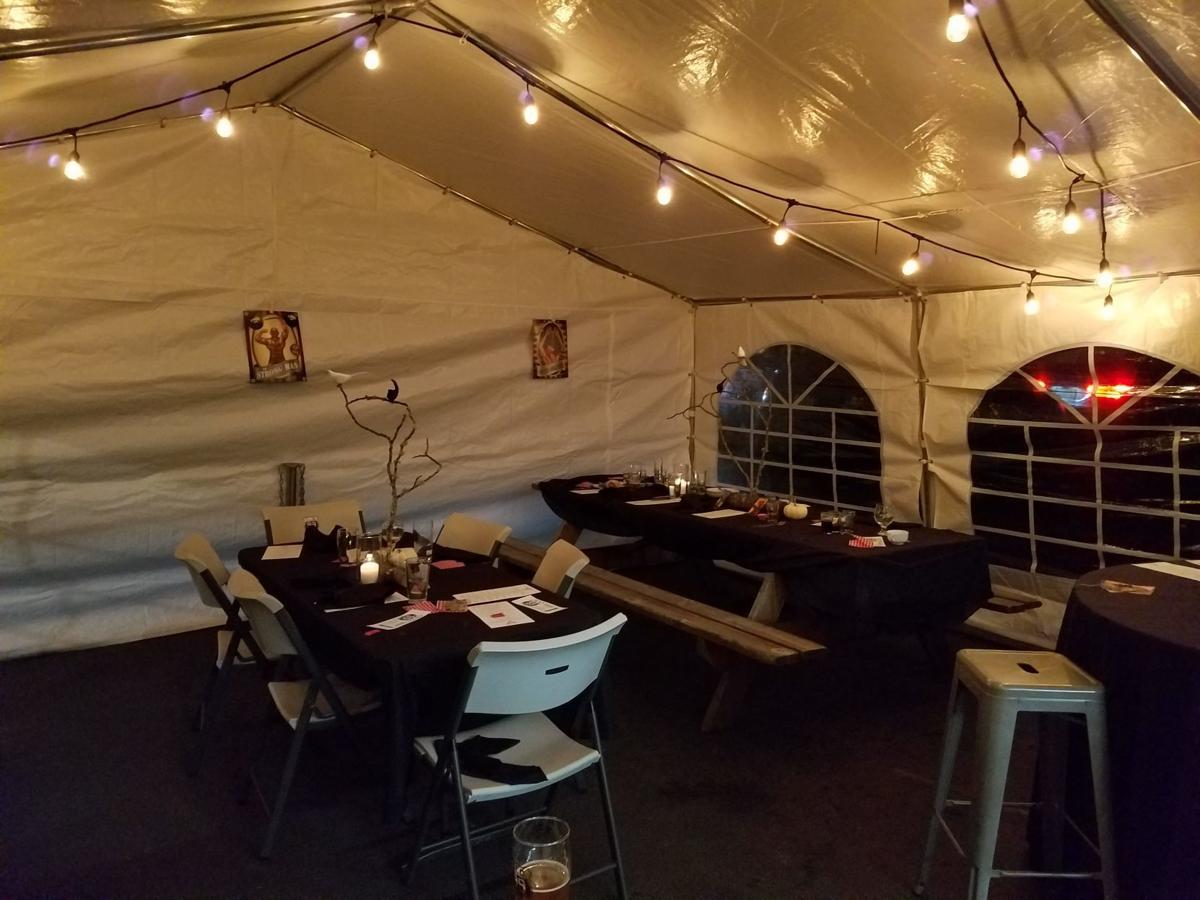 Chefs Devey Michaels, right, and assistant Diane Griffin pose for a photo near the conclusion of their “Night Circus” dinner at Old 99 Brewing Co. in Roseburg on Sunday night.

A small poster advertises a sword swallower at the “Night Circus” dinner at Old 99 Brewing Co. on Sunday. Though the dinner was circus-themed, there was no actual sword swallowing.

“Night Circus” was the theme of the beer and dinner pairing at Old 99 Brewing Co. in Roseburg on Sunday, and it was evident in the simple yet intriguing decor at the brewery that evening.

Tables were set with black cloth, and an elegant centerpiece consisting of a cut hardwood branch with a bit of moss or lichen and two songbirds, one black and one white, which appeared quite lifelike at first glance. At each seat was a copy of the evening’s whimsically-worded, hand-penned menu, a brass key and a small envelope reminiscent of a striped circus tent. A tiny card attached to each key read, “Unlock your future,” and upon opening their envelopes, guests discovered a single tarot card. Inspired by the 2011 Erin Morgenstern novel of the same name, Sunday’s “Night Circus” dinner hosts also included other menagerie-themed items, like string lighting and small posters advertising a strongman, sword swallower and “mystic madam.”

Although the event was scheduled to begin at 5:30 p.m., guests had plenty of time to get acquainted with each other and the decorations before the first course was served around 6 p.m. It was evident from the first bite that chefs Devey Michaels and Elizabeth Turner of Basil and Sage had put a lot of thought into the pairings.

The first of eight courses consisted of a bite-sized dish of lamb meatball and sweet black cherries on top of herbs de Provence-scented jasmine rice. It was paired with a sample of Old 99’s Infrared NW red ale, a ruby-colored, malt-forward — yet balanced — beer with relatively low carbonation. The sweetness of the specialty malts in the ale reinforced the natural sweetness of the lamb, with the cherry adding its own sweet-tart complexity. The slight palate-cleansing bitterness in the finish of the ale left diners exactly the way a first course should: Wanting more.

The second course arrived just in time to satisfy that desire. Requiring several bites this time, diners were presented with a small plate of squid ink black ravioli stuffed with prawns and fresh herbs, swimming in a garlicky cream sauce. Despite its own slightly creamy, medium-bodied texture, the Half Hazard Hazy pale ale was the perfect foil to the dish, with notes of tropical fruit and citrus that paired well with the hint of cilantro in the ravioli. Yet the beer possessed enough acidic hoppy bitterness to cut through the richness of the cream sauce.

The third course was titled, “The Juggle,” and the components seemed appropriate. A garden salad paired with a big, bitter double IPA? That would certainly require some skill to pull off. Fortunately, the chefs’ talents were up to the challenge.

The salad was made of items from the chefs’ own farm, including heirloom tomatoes and cucamelons, a grape-sized Central American melon that looks like a miniature watermelon and tastes like a combination of cucumber and light melon. Earthy and sweet red beets cut in the shape of hearts, microgreens and an endive leaf rounded out the salad, and tangy citrus dressing covered it all.

One would normally expect a double IPA in the Pacific Northwest to overpower the delicate flavors of the fresh fruits and vegetables, but Billy Bad Ass double IPA is a bit more balanced than most in our region. The strong malt backbone stands up to the massive doses of hops in the ale, which allowed the citrusy, earthy salad to shine through.

At this point in the evening, Old 99 proprietor Matt Hill introduced Michaels to the diners, and she made herself available to answer questions if anyone had any. None of the diners immediately had any, but from that point forward there was a noticeable increase in the time between courses.

The fourth course arrived a bit later, and consisted of a pineapple sorbet paired with Win Win Hazy IPA. Both the sorbet and the IPA had juicy tropical flavors, and several of the diners actually mixed the two, which was surprisingly pleasant, kind of like a pineapple-hops smoothie.

Diners rapidly finished their sorbet — or beer-sorbet smoothies — which made the wait for the fifth and main course seem a bit longer. It was worth the wait.

Each diner was served a generous portion of sous vide beef tenderloin, drizzled with just enough chimichurri to get some with every bite and accompanied by a few discs of a mildly sweet white jicama- or sweet potato-like tuber and a light, beefy sauce. The beef was fork-tender, cooked to a perfect medium-rare and had just a hint of smokiness from the light searing performed after the beef was removed from the sous vide. The high ceilings in the brewing area were put to good use when the beef was being seared, as a two-foot layer of smoke rapidly filled the area before dissipating. If the ceilings had been lower, the atmosphere might have become as hazy as some of the beers.

The beer chosen to pair with the main course was perhaps the most popular offering from Old 99, For The Win IPA. The light copper colored ale is big on hops, with a strong bitter flavor that stood up well to the beef and chimichurri without overpowering the more subtle sweetness of the tubers.

Beginning to feel somewhat sated, diners nevertheless eagerly awaited the sixth course. There was some debate about the exact form it would take, as the description on the menu read simply, “This cheddar walks into a beer batter.” Some diners speculated that it might be something like battered and fried cheese curds, but were surprised to find that the course actually consisted of a pair of lightly seasoned, fried cornmeal drops, similar to hushpuppies, and a tangy cheddar sauce. Paired with the slightly malty and mild Old 99 pilsener, it was a pleasantly mild transition into the dessert courses.

As the hour approached 9 p.m., several diners decided not to wait on the dessert courses and made their way out, but those who stayed were greeted with a memorable dessert consisting of a bready apple pastry topped with a not-too-sweet vanilla and spice ice cream with a crunchy crystalline shard of cinnamon candy. The rich, fruity, spicy dessert was well-paired with Fogline stout, a very dark ale with notes of roasted barley and coffee.

The patience of remaining diners was rewarded again when Matt Hill offered sips of a bittersweet imported liqueur from his private stash before the final course of the evening.

As the night matured and conversations turned from the food and drink at hand to anticipation of the coming week, a simple and satisfying finale was presented. Each diner received a gumball-sized dark chocolate truffle topped with salt, paired with Menagerie Oak-aged Russian Imperial Stout. The chocolate was as dark as the beer, with the classic flavors of coffee and chocolate coming together, while the strong, almost wine-like alcohol in the stout was tempered by creamy chocolate melting in the mouth.

Although the dinner took quite a bit longer than most attendees anticipated, the quality of the food and beer, as well as the skillful pairing combinations, made the time worthwhile. As the crowd thinned and the chefs became more visible, the final sight before departing was a view of the chefs beginning their cleanup, still moving with the energy and grace of acrobats after their many hours of service.

It was truly a show worth seeing and a fitting end to the “Night Circus.”

Vince Johnson is a designer for The News-Review and a beer enthusiast.

With love and barbecue

Good for your gut

With love and barbecue