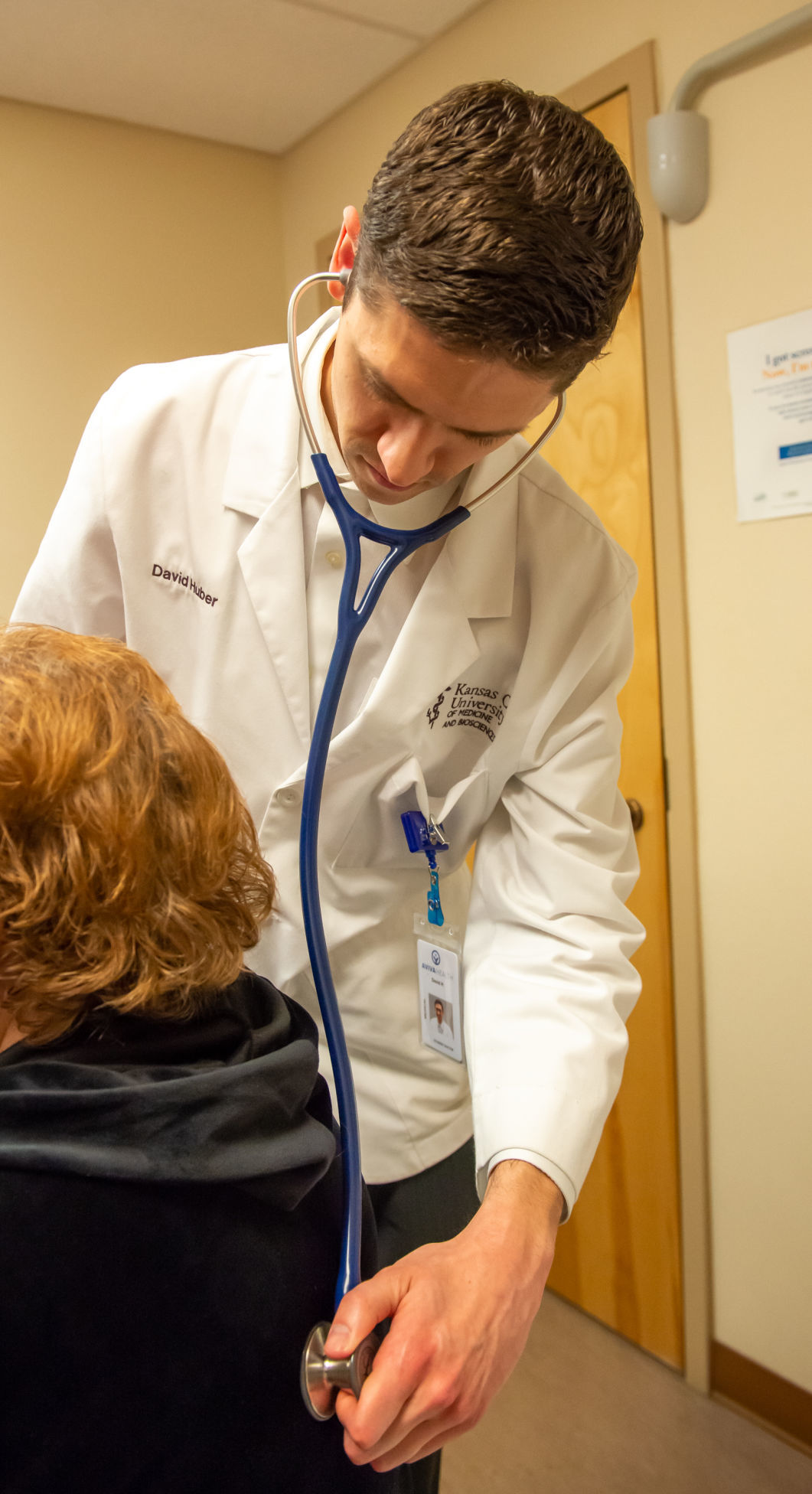 David Huber checks a patient at Aviva Health on Monday. Huber is a fourth-year medical student. Aviva Health, along with other community partners, is launching a family practice doctors residency program in the next few months that has the potential to bring 8 new doctors to Roseburg each year. 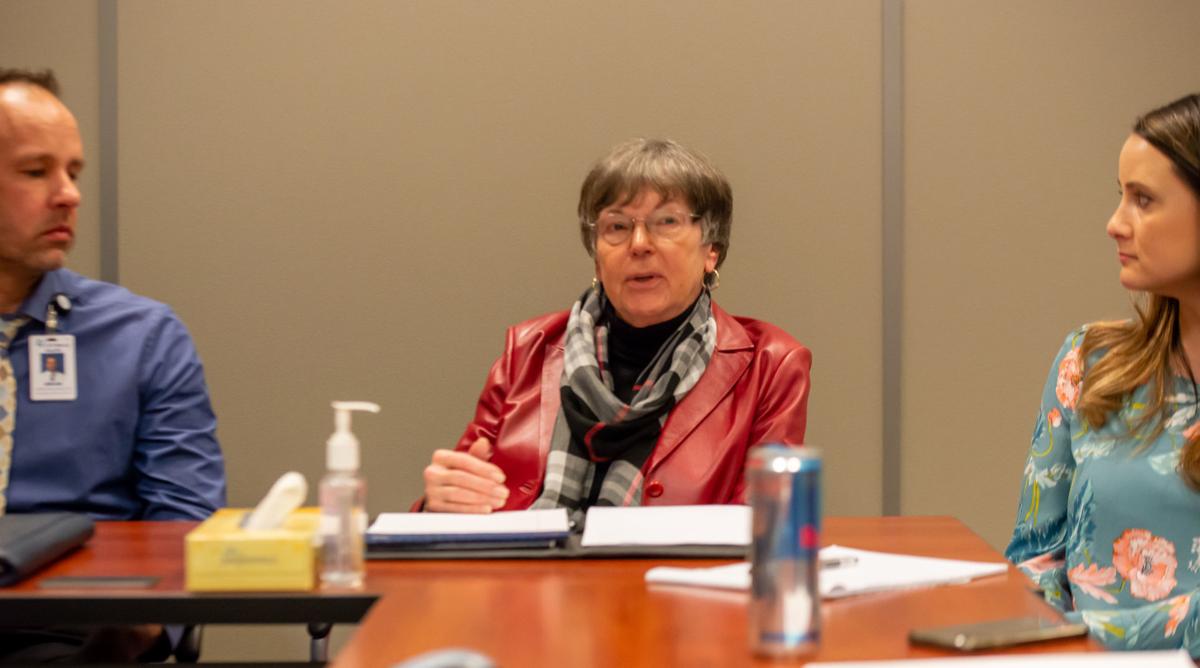 Aviva Health board president Ruth Galster explains the exciting nature of the new Roseburg Family Medicine Residency Program that Aviva and other community partners have begun. The first residents are expected to arrive in a few months.

David Huber checks a patient at Aviva Health on Monday. Huber is a fourth-year medical student. Aviva Health, along with other community partners, is launching a family practice doctors residency program in the next few months that has the potential to bring 8 new doctors to Roseburg each year.

Aviva Health board president Ruth Galster explains the exciting nature of the new Roseburg Family Medicine Residency Program that Aviva and other community partners have begun. The first residents are expected to arrive in a few months.

The Roseburg Family Medicine Residency program has been quietly moving ahead with plans to begin a program in July that would prepare eight physicians each year to become board-certified family medicine doctors.

The program, which is separate from the proposed Southern Oregon Medical Workforce Center, will be hosted on the Aviva Health campus, formerly Umpqua Community Health Center, on Kenneth Ford Drive in north Roseburg. The hope is that the community can keep a significant number of the doctors it produces to set up practice in Douglas County where the shortage of medical professionals has gotten to a critical state.

After five physicians in Roseburg left family practices about five years ago — three retired and two became hospitalists — there were about 6,000 patients in the county that had to find another primary care provider.

“We’ve never recovered from that, the community has not filled that gap,” said KC Bolton, CEO of Aviva Health. Bolton oversees the tier-5, patient-centered primary care home which will serve as the family medicine practice for the residency.

With a few more family medicine providers indicating they will be retiring in the future, Bolton said the shortage has become even more critical. Recruiting for primary care and specialty doctors has been a huge challenge in Douglas County, but Bolton said the residency program could be an attraction for providers to stay here.

By the third year, there would be 24 physicians finalizing their clinical training to be certified and the hope is that many of those will remain in Douglas County. Meanwhile those two dozen family practice medical school graduates will be working in the clinic helping with patients.

“This idea that we needed to grow our own is important,” said Dr. Chip Taylor, residency director for the Roseburg Family Medicine Residency program. “Most family physician graduates — 50% plus — will practice within a hundred miles of where they graduate, so the mission of training for rural practice is really key.”

Over the last year, the residency program has been able to secure several grants for the start-up of the program.

“We’ve been wildly successful in getting at that money in my opinion,” Bolton said. “We have enough programmatic funds to sustain the program for at least five years.”

The funding has been secured for the program side of the project through state and federal grants. Aviva Health and CHI Mercy Medical Center have filled in the gaps for expenses.

“We were also able to tap into a different funding stream which will go on in perpetuity so long as the federal budget allows,” Taylor said. “But we have funding, as much as we need, otherwise it would have been a no-go.”

Aviva Health has taken on an expansion project to increase clinical capacity for the 24 practitioners to learn, but the expansion will also provide the needed space to support the students from the proposed medical college including rotating physician assistants, nurse practitioners, licensed clinical social workers and other medical professionals coming from the SOMWC.

“So the third year, where there are 24 (of the residents), that’s the breaking point, so we’ve got to have a larger practice area,” Bolton said.

The new medical students starting their residency at Aviva in July will begin their three-year stint before construction gets started on the Aviva Clinic expansion set for September.

The residency program could impact the community in several different ways from job generation, patient collections and a variety of other contributions to the economy.

Recruiting faculty for the program has been another challenge, but Taylor says the panel is pretty well set.

“We’re starting out very strong, and I have a great core faculty,” Talyor said.

Beery, a family physician, is a native of Roseburg who came back to her hometown to practice after medical school. She said the program will teach lifestyle medicine and is working with Blue Zones Project-Umpqua on several of the projects they are doing. Beery helps teach the Total Health Improvement Program that teaches how to eat healthier and live an overall healthier life, and is working to get more people in the community involved in those programs.

“Lifestyle medicine is basically a practice of medicine where we’re really trying to prevent and reverse chronic disease based on motivational interviewing to help people decrease alcohol and tobacco use, increase exercise and improve their diet,” Beery said.

Bolton feels that having someone like Beery interacting with the students will be helpful in convincing them to stay in the area.

“I think coming back to her hometown is a great message in terms of what she can pass on to the residents as well,” Bolton said. “And I think the new clinic is going to be a draw for those residents.”

Applications from medical students have already been accepted and board members have been conducting interviews for the eight spots in the program starting in July.

Aviva Health board chair Ruth Galster and board member Gwen Graham have participated in the interviews and found that none of the candidates had reservations about the medical experience they would get in Roseburg.

“It was fascinating to hear a lot of comments and positive comments about where those individuals were and what they were looking for,” Galster said.

Galster said many of the students had roots in the Northwest or went to medical schools in the region and were excited to come here because of all the activities to do outside of their medical responsibilities.

Graham said the interview board talked with 96 students and the board’s questions brought up a lot of interesting responses.

“The message for me seemed to always be that they were really interested in rural medicine and working in a rural area, so the people that were attracted to applying here were already looking for a rural area,” Graham said.

“I think it’s a prestigious thing,” said Brian Eichman, project manager for the residency program. “When we recruit specialists and they find out we’re starting a residency program, they’re really excited about that and want to be part of the learning and teaching process.”

Eichman said the residency program will also shift the medical staff in the community to be more of a learning environment and the teachers will learn from it as well.

“This is a big task but we saw it as consistent with making sure our patients have access and we can do this and still stay true to the core mission,” Bolton said. “This is a game-changer for the community.”

Ask the Dietitian: Should you take a probiotic?

How families can cook together as they confront COVID-19

Years ago I suggested that Roseburg do what Cicely (Northern Exposure TV) did....offer a physician a job here, with the proviso that they stay at least 5 years...during which time their student loans would be paid down 10% a year....after that, 5% for each additional year they stay.

How on earth did anyone add the angry emoji? This residency program will benefit the community. One might as well be against puppies.