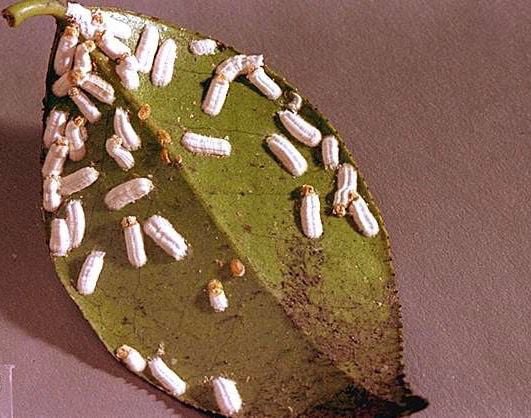 Once cottony scale insects pierce a plant to feel, they become firmly attached and cover themselves with a waxy material that protects and hides them. 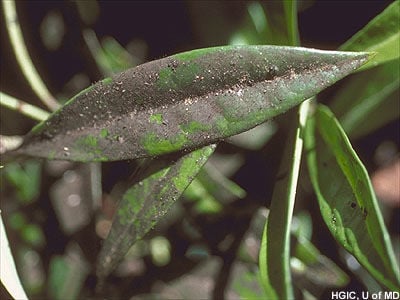 Sooty mold, a black coating over the surface layer of a plant, is caused by a fungi invading leaves.

Once cottony scale insects pierce a plant to feel, they become firmly attached and cover themselves with a waxy material that protects and hides them.

Sooty mold, a black coating over the surface layer of a plant, is caused by a fungi invading leaves.

Question: What is wrong with my camellia bush? It’s covered with these white fuzzy lumps and some of the leaves have turned black.

Answer: What you have infesting your camellia bush are actually insects called cottony scale. These sucking insects hatch out of their eggs in the spring and summer as tiny “crawlers,” named thus because they actually crawl on legs to find a feeding source. Most gardeners are not even aware of them at this stage because of their small size.

Once they settle down to feed, they pierce the plant with their needle-sharp mouthparts and do not move again. They become firmly attached to the plant and cover themselves with a waxy material that protects and hides them, which accounts for gardeners not realizing they are actually a living insect.

Scale insects come in many types and forms, depending on their host plant. On camellias, they appear as slightly fuzzy white lumps. By feeding on the sugary sap of the plant, scale insects produce a sticky substance called honeydew, giving a shiny appearance to the leaves of the plant.

In turn, this honeydew attracts ants, wasps and other insects. It also causes fungi to invade the leaves, producing an ugly black coating over the surface layer called sooty mold.

There are other insects, like aphids and whiteflies, that produce honeydew leading to sooty mold as well.

So what to do? Unfortunately, scale insects are difficult to control. Prune out branches and areas that have severe symptoms. Parasites like lady bugs feed on scale, so avoid spraying with insecticides that could harm them during the summer. Keep shrubs well-watered and do not over-fertilize.

The best stage to manage scale is when you can catch them in the spring during their crawler stage. Apply a contact insecticide such as insecticidal soap directly to the crawlers. However, it’s difficult to catch them at this stage due to their small size. Once they settle on the plant and grow their protective covering, contact insecticides are mostly ineffective.

The most effective and safe method to control scale is using a horticultural oil spray. Such sprays contain an oil that readily mixes with water. The oil coats the scale insects and suffocates them by clogging their breathing pores, killing them without using a toxic material that could harm beneficial insects. Always read and follow the label.

You may need to make one or two follow-up applications. Be sure and spray the oil on all surfaces of the leaves and stems, both upper and underside, as direct contact is essential to kill them. Using a dormant rate of horticultural oil during the dormant winter season can help control overwintering scale.

Oil sprays are best used when temperatures are between 45 and 80 degrees and when plants are not stressed. That’s why spring application is more effective, though some products like Year-Round and All Seasons can be used in summer.

Another benefit of oil sprays is they help clean off the leaf surfaces. The sooty mold will continue to be present until their food supply is used up, but the oil speeds up the process.

If use of an oil spray is impractical, another method is to use a systemic insecticide. Systemics are applied to the roots by drenching the roots around the base of the plant. The insecticide is pulled up into the plant tissue through the roots, and when the scale ingests the toxin by piercing the plant’s sap, they are killed. Some systemics are acephate, imidacloprid and dinotefuran.

Parenthood is uncharted territory, no matter the parent's age

Ask a Master Gardener: To restore or not to restore that old apple tree