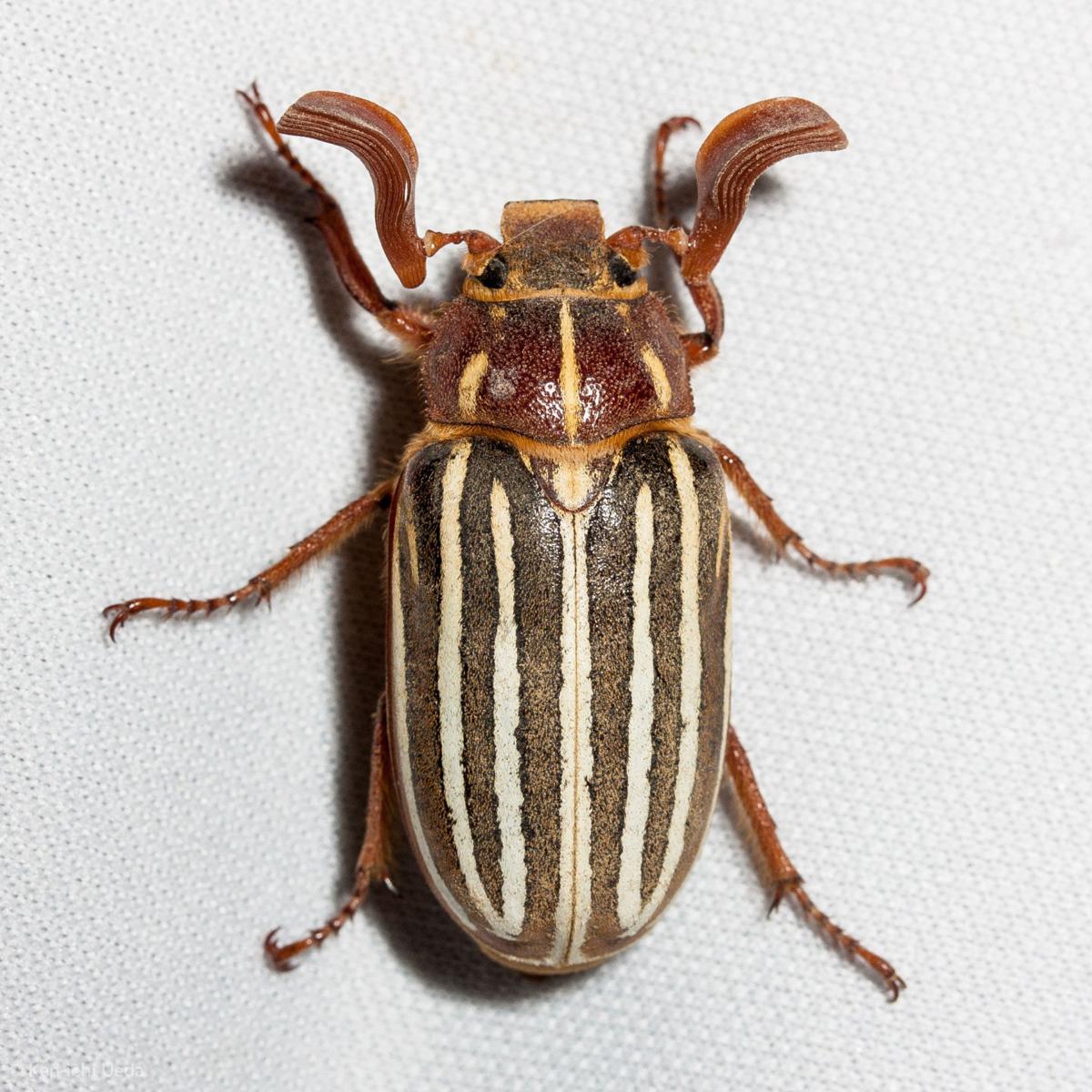 Also known as Watermelon or Tenlined June Beetles, June beetles are a type of scarab native to the Pacific Northwest. They are rather harmless to home landscapes. 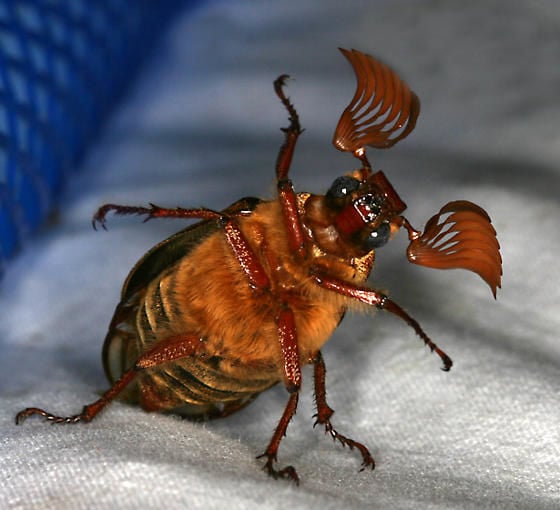 June bugs use hissing as an audible defense, meant to discourage you from harming it. 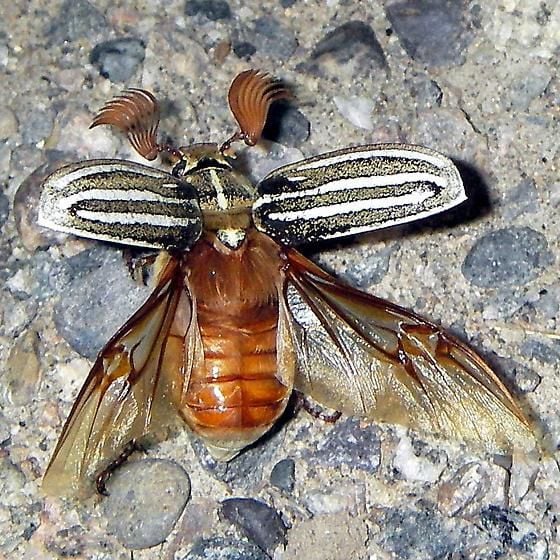 June Beetle larvae are cream colored grubs with brown heads, reaching a length of 2 inches. They spend the first two to four years of their life in the soil. 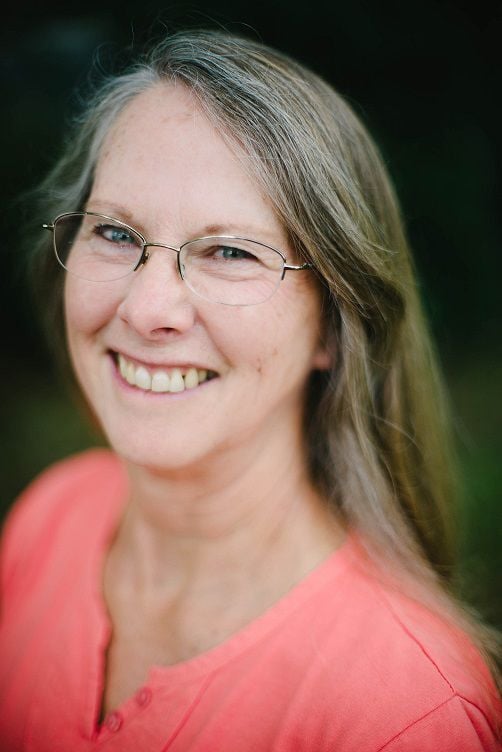 Also known as Watermelon or Tenlined June Beetles, June beetles are a type of scarab native to the Pacific Northwest. They are rather harmless to home landscapes.

June bugs use hissing as an audible defense, meant to discourage you from harming it.

June Beetle larvae are cream colored grubs with brown heads, reaching a length of 2 inches. They spend the first two to four years of their life in the soil.

Question: I found this large striped beetle bumbling around my porch light at night. What is it and is it harmful?

Answer: What you have there is a type of scarab beetle, native to the Pacific Northwest, that goes by the common names of “Watermelon Beetle” (because of its stripes), “Tenlined June Beetle,” or just plain old “June Beetle.”

Polyphylla decemlineata makes its appearance starting in June and can be found even into the months of August and September. Their relatively large size (up to 1.5 inches in length), uniquely striped wing covers and exotic-looking antennae seen in the males set them apart from the other large beetles found in Oregon.

The beetles emerge from the soil in late June through July. June beetles are commonly seen flying during the evening hours and are attracted to artificial lights at night, hiding in tree canopies and under organic debris during the daytime.

Another remarkable thing about these beetles is they will hiss at you if you prod them with a finger or stick! Their hissing is an audible defense, similar to the hissing of a bat, and meant to discourage you from harming it. It’s all a big show as June beetles are totally harmless themselves, at least in their adult stage.

Their larval stage is another story, however. Here’s a look at their life cycle. Adult June beetles are out and about in the summer evenings, searching for adult females. The females stay down near the ground, emitting pheromones that are picked up by the adult males with their large, feathery antennae. After mating, the females will lay about a dozen eggs in the soil.

Hatching from the eggs, the larvae begin their life in the soil which can last from two to four years. The larvae are cream-colored grubs with a brown head, reaching a length of 2 inches. The younger larvae spend their time deep in the soil where they will feed on fine, tender plant roots. As the larvae age, they move closer to the surface of the soil and feed on woodier roots.

This is where the major damage occurs by this beetle if they’re present in large numbers, especially to orchard trees as well as vegetable and berry plants. Initial damage to root systems may not be immediately evident in above-ground production of new shoots and leaves, but enough larvae feeding on the roots can cause severe injury or death to mature trees.

Adult June beetles have been known to notch leaf edges, but the damage is very minimal. Not much damage is found in home landscapes either, where the beetles show up in smaller numbers. Females don’t travel very far from where they emerge, so when they start to lay their eggs, the larvae populations tend to be more localized and clumped in a certain space.

Controlling June beetle larvae with pesticides is not very effective since they are rarely a problem in a general landscape. Since infestations in orchards are localized, they are often first detected when a clump of trees starts to decline and die. Larval infestations can spread slowly to neighboring trees, so control requires removing the infested trees and even one or two uninfected trees on all sides of the targeted area, and then fumigating the soil before replanting.

Definitely inspect the roots of any removed trees for the presence of larvae or their feeding. It has been observed that soil drenches of an organophosphate insecticide applied as soon as the first adults emerge in May or June can reduce their numbers. But this approach must be repeated in consecutive years since the beetle has a two year life cycle in the soil.

Do you have a gardening question? Contact the Douglas County Master Gardeners via email at douglasmg@oregonstate.edu.