Weevil larvae are legless, C-shaped grubs with cream-colored bodies about half an inch long and pale orange-brown heads 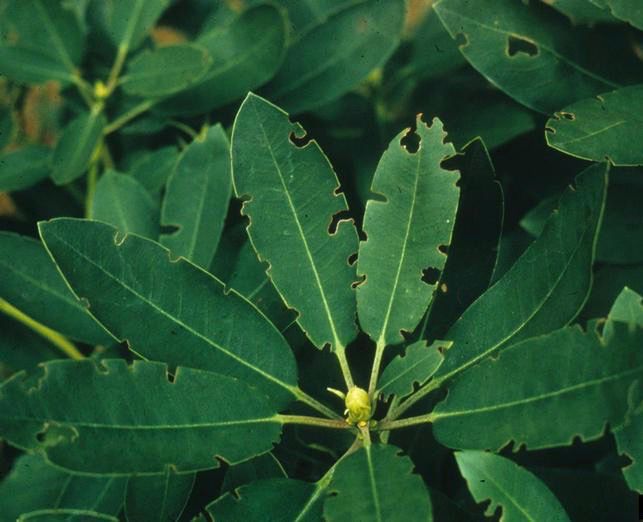 Leaf notching is the most easily-observed injury to plants. The notching typically begins at the base of the plant, moving upward during the summer. The previous season’s damage often has brown edges along the notching. 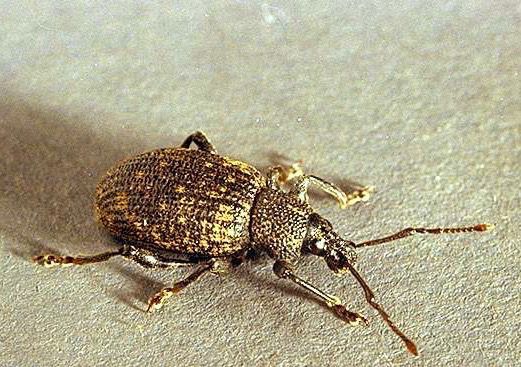 There are all kinds of weevil pests, such as strawberry root weevils, lilac root weevils and even one called the hairy spider weevil, which sometimes wanders harmlessly into buildings.

Weevil larvae are legless, C-shaped grubs with cream-colored bodies about half an inch long and pale orange-brown heads

Leaf notching is the most easily-observed injury to plants. The notching typically begins at the base of the plant, moving upward during the summer. The previous season’s damage often has brown edges along the notching.

There are all kinds of weevil pests, such as strawberry root weevils, lilac root weevils and even one called the hairy spider weevil, which sometimes wanders harmlessly into buildings.

Question: What is eating my rhododendron leaves? They have all these notches along their edges. What can I do about it?

Answer: What you have feeding on your rhododendron leaves indicates the damage was done by the black vine root weevil, Otiorhynchus sulcatus.

Root weevils are a type of “snout beetle” — probably so named because of their long probiscus. There are all kinds of weevil pests, such as strawberry root weevils, lilac root weevils and even one called the hairy spider weevil, which sometimes wanders harmlessly into buildings.

All weevils are beetles with root-eating larvae and leaf-notching adults. Usually all a gardener notices is the damage — such as yours to the leaves — but even more destructive is the damage done to the roots. This can even end in girdling the plant at the trunk base, leading to death of the plant. Larger plants can experience nutrient deficiencies because of the root damage done by weevil larvae. Controlling weevils is nothing to sneeze at.

First, let’s look at the life cycle of this dastardly denizen. Weevils spend the winter as larvae in the soil, feeding on plant roots when the temperatures are ideal. The larvae are legless, C-shaped grubs with cream-colored bodies about half an inch long and pale orange-brown heads. In the late winter and early spring, the larvae enter the pupal stage, quickly followed by the emergence of adults in mid to late spring.

The black vine root weevil produce only females, reproducing asexually. The adults lay their eggs in clusters from June to September, depositing the eggs into soil cracks. Immediately after hatching, the larvae wriggle through the soil and begin feeding on the roots of the plant.

Adult weevils cannot fly and don’t travel far from their host plant, so it’s likely larvae are developing on plants that show injury by adults. During the day, adult weevils hide under the moist mulch or debris around the base of the plants. Then at night, about an hour after sunset, they climb up the trunk of the plant and begin to feed on the leaves, leaving the tell-tale notches along the leaf margins.

If disturbed, root weevils will drop from the plants and play dead. Adults typically live for only a couple of months.

Leaf notching is the most easily-observed injury to plants. Examine your woody plants for fresh notches on the margins of new leaves. The notching typically begins at the base of the plant, moving upward during the summer. The previous season’s damage often has brown edges along the notching.

So what to do? There are a few ways to control root weevils. The more labor-intensive is to pick off the adults in the evening when they come out to feed, using a flashlight. Also, you could place a white drop cloth under the plant in the evening or early morning, then shake the leaves so they drop onto the cloth. Or place a board under the plant during the day, checking for any hiding adults, then scape them off into a bucket of soapy water.

A wrapper called Tanglefoot that is coated with a sticky substance can be wrapped around the trunk of the plant to prevent weevils from climbing up the plant. Since weevil eggs and larvae require moisture to survive, pull back mulch around the plant to allow the soil to dry out, only watering the plant as necessary.

Beneficial nematodes, which are microscopic worms, can be effectively used as a soil drench. Nematodes will feed on the larvae in the soil and are non-toxic to plants and animals.

Timing is important when using these larvae gulpers. There are two optimal times to apply beneficial nematodes. The first is to do one in late spring/early summer, which targets late-stage larvae and pupae. Soil temperatures need to be around 55 degrees or above to be effective.

The other, more reliable time, is at the end of summer, August through early October, when soil temperatures are warm and the nematodes will target young weevil larvae. Pulling back mulch and leaf debris around the plants will help the nematodes get to the roots where the larvae are feeding.

Nematodes may be purchased at local garden centers or ordered on the Internet. They are added to water and applied according to package instructions. Remember to apply when soil temperatures are above 55 degrees. Releasing them on a cloudy day or early morning or evening is preferable as nematodes are sensitive to UV light from the sun.

Since nematodes don’t swim, but rely on water to carry them through the soil, make sure the root zone around the plant is kept moist by watering thoroughly before and after application.

The last resort would be to spray adult weevils with a pyrethroid insecticide such as permethrin, bifenthrin, cyfluthrin or cyhalothrin. Since these insecticides are lethal to pollinators, do not use them if your plant is flowering. They are best applied on the lower trunk of the plants and around the base to kill the weevils as they climb. Spray late in the day, shortly before the weevils become active, to improve effectiveness.

With persistence and know-how, you can whip those “wascally” weevils and protect your landscape plants from destruction.