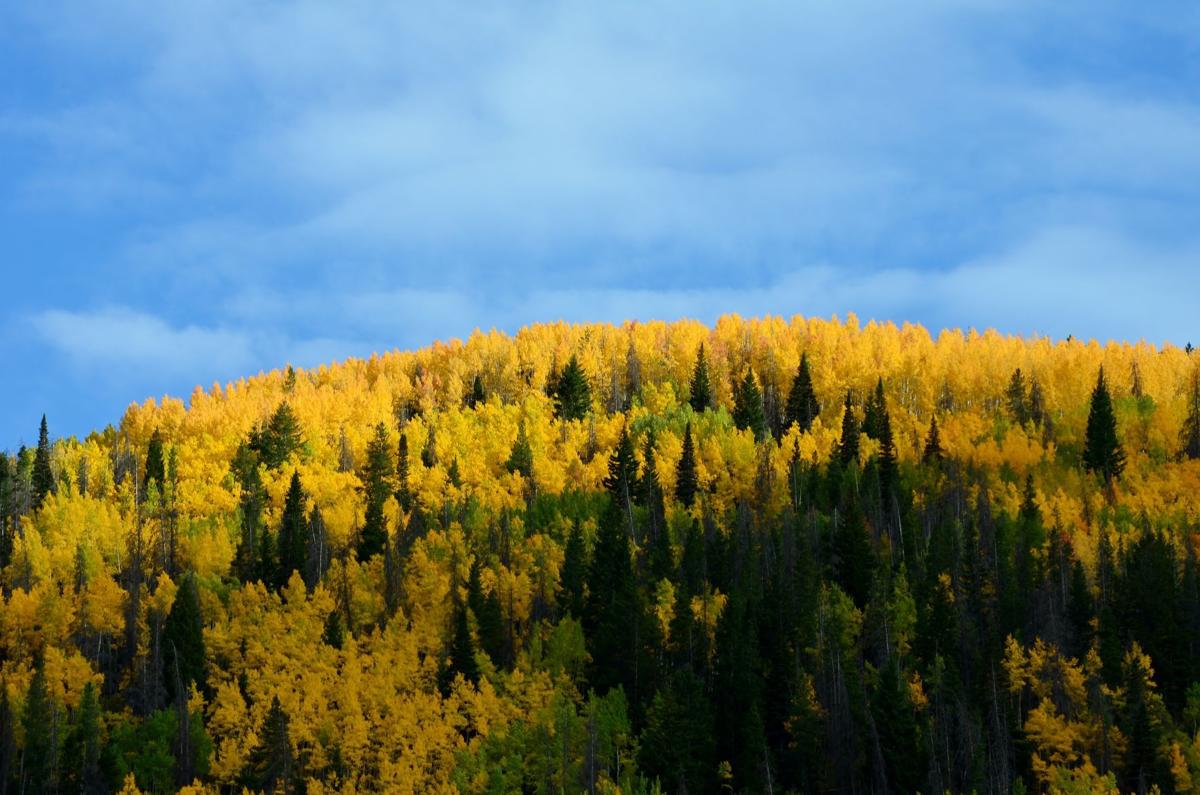 This aspen grove right above Vail, Colorado, is one of may throughout the Colorado mountains. Aspen trees grow together in a network with a joint root system, which is why many large aspen groves change color at the same time during the fall. 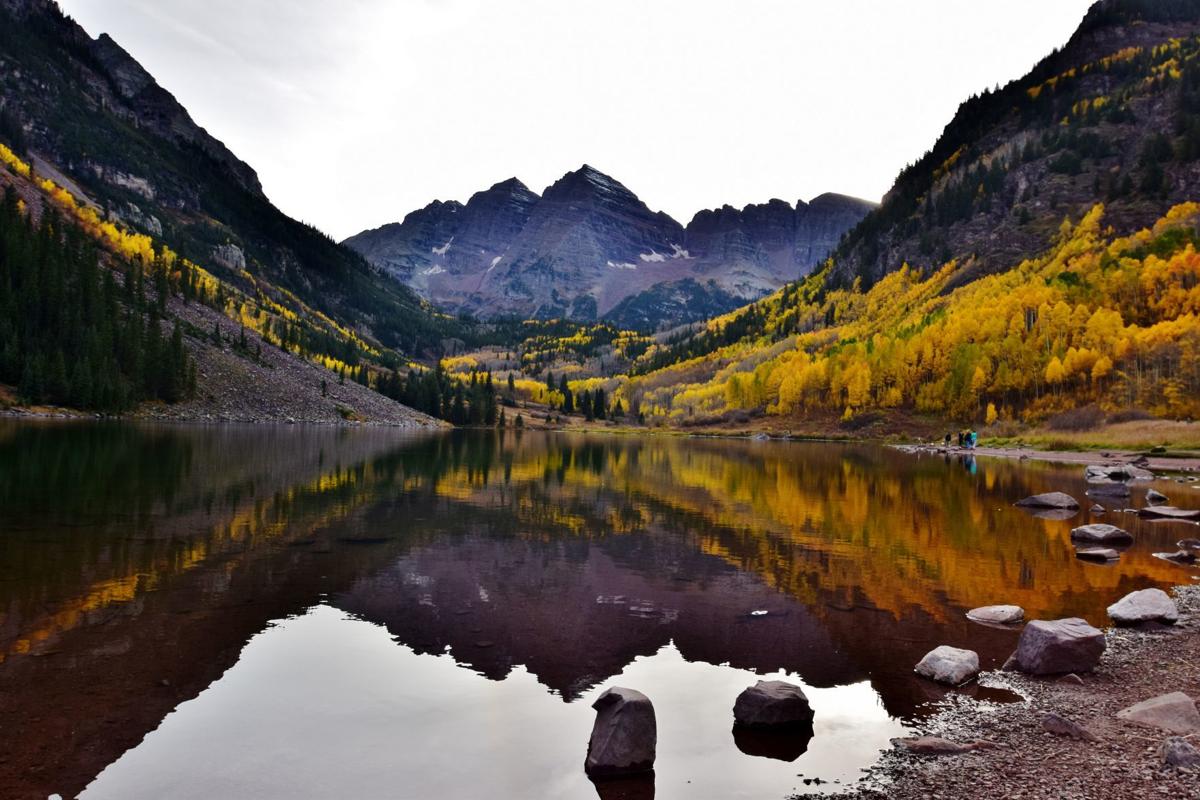 Known as one of the most photographed places in North America, Maroon Bells outside of Aspen is known for its breathaking scenery. 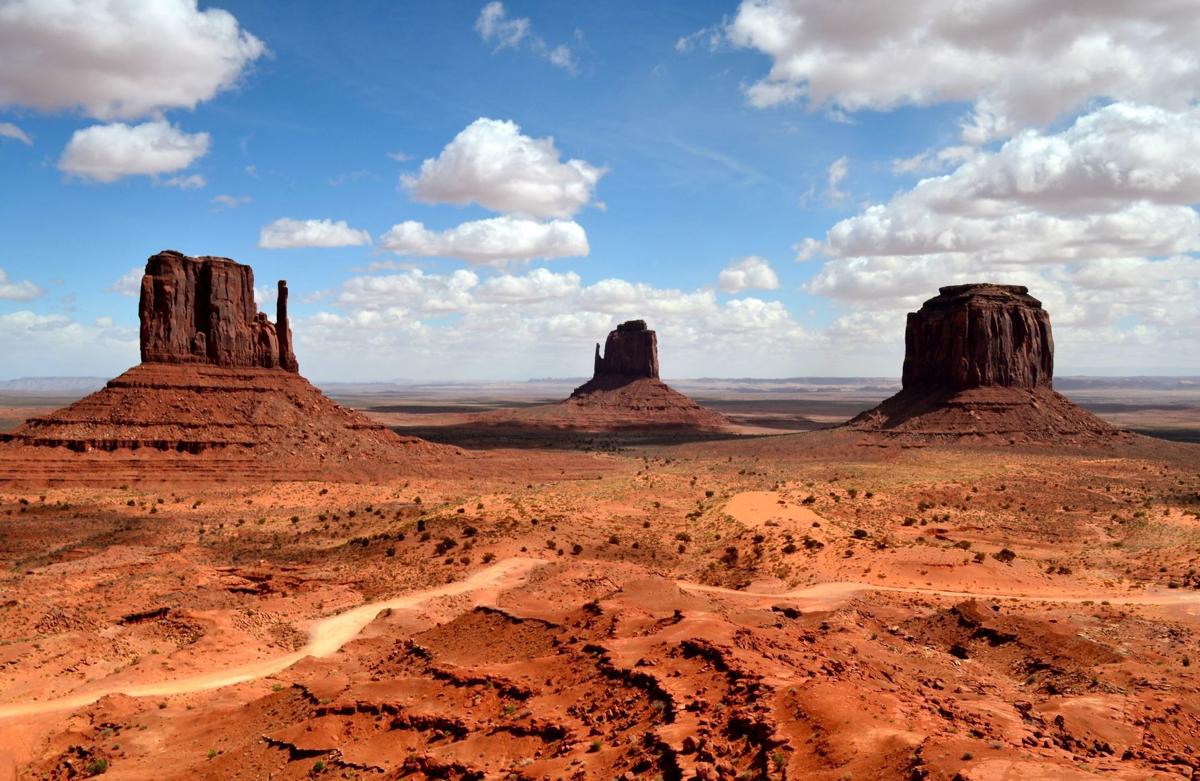 Monument Valley just south of Bluff, Utah, offers spectacular views that harken reminders of the Old West if the late 1800s. That’s fitting: dozens of Westerns have been filmed there in the last 100 years.

This aspen grove right above Vail, Colorado, is one of may throughout the Colorado mountains. Aspen trees grow together in a network with a joint root system, which is why many large aspen groves change color at the same time during the fall.

Known as one of the most photographed places in North America, Maroon Bells outside of Aspen is known for its breathaking scenery.

Monument Valley just south of Bluff, Utah, offers spectacular views that harken reminders of the Old West if the late 1800s. That’s fitting: dozens of Westerns have been filmed there in the last 100 years.

There’s something about fall in the Mountain Time Zone that, to me, is just special.

Granted, I’m a little biased. I grew up in Colorado Springs and have lived all but eight years of my life in Colorado. And that’s not taking anything away from Southern Oregon and Douglas County, where its deciduous trees will explode with yellows, reds and oranges in the weeks to come.

But Western Colorado and Eastern Utah also offer unmistakable color and beauty, enough that it draws movie stars — and movie makers — to that area to live, play and work on a consistent basis.

Late September and early October is a perfect time to visit these places. Temperatures are sweater-weather brisk, but there’s enough sunshine to keep you cozy, but not sweaty, as you hike amidst the natural beauty.

The following are three places that, if you’re jonesing for an impromptu road trip, offer views and colors unlike anywhere else on the planet.

Located northwest of Aspen up Maroon Creek, the Maroon Bells are two peaks in the Elk Mountains, Maroon Peak and North Maroon Peak, separated by about one-third of a mile. They tower over Maroon Lake and Crater Lake, which are formed by the constant snowmelt coming off the picturesque mountains.

Both peaks are among the more than 50 14ers — that’s mountains surpassing 14,000 feet in elevation — in Colorado, with Maroon Peak sitting at 14,163 feet and North Maroon Peak coming in at 14,019. It’s nestled in the White River National Forest, and it was one of five areas in Colorado designated as wilderness in the original Wilderness Act of 1964.

Getting there: If you’re fit and willing to take in some breathtaking scenery, a hiking trail from Crested Butte to Maroon Bells provides a 10.2-mile jaunt past wildflowers, old homesteads and steep cliffs. If you’re not so fit, take a jaunt from Highway 82 to Highway 13 to the park. There’s no traffic on the road, however, allowed from 8 a.m. to 5 p.m., meaning visitors during that time frame must park at Aspen Highlands ski resort and pay a small fee for a shuttle-bus ride.

Cost: Other than the bus fare, it doesn’t cost anything to go to Maroon Bells. Hanging out might be a little pricy since it’s, well, in Aspen. For example, one popular burger place in Aspen, CP Burger, charges $12.15, plus tax, for its low-end cheeseburger with fries. Then again, if you’re gonna splurge on the money it takes to get there, you might as well splurge on lunch or dinner.

Conveniently located right off of Interstate 70, Vail is a resort town with World Cup skiing in the winter and an active nightlife in the summer. But fall is offseason in Vail, meaning the colors on the mountaintops pop bright yellows and the amenities in town are somewhat affordable.

There’s a walking trail from one end of town to another that parallels Gore Creek, which like Maroon Lake and Maroon Creek gets its water from snowmelt or consistent rainfall. Gardening enthusiasts could spend hours at the Betty Ford Alpine Garden, named after the wife of former President Gerald Ford. A quick 1-mile trip up the hiking trail past the Vail Nature Center provides up-close looks at fall foliage and wildlife, and a jaunt up Vail Mountain on the ski resort’s gondola leads to a second-to-none view from 11,000 feet above sea level.

Getting there: Vail is almost right smack in between Grand Junction and Denver on I-70, meaning there’s easy access from the major highway. There’s also Eagle County Regional Airport, which is a half hour’s drive from Vail as opposed to the aforementioned cities, which are at least a 2-hour drive away.

Cost: As you’d expect, all of the hiking trails, along with the Alpine Garden, are free of charge. And like Aspen, Vail is in it’s fall offseason, meaning restaurants and hotels are charging discounted offseason rates that are dirt cheap compared to peak-season rates but still pricy for someone not willing to use a credit card.

This is a place where, when I see it, the theme song from “Bonanza” or some dramatic western movie theme song gets stuck in my head. And it figures: Dozens of movies, ranging from “Forrest Gump” to John Wayne’s “Stagecoach” from 1939, were filmed there. One of the signature points of the park is “John Ford’s Point,” a flat overlook where the director, Ford, would often film an overhead view of a fake town or village.

Although it doesn’t have the leaf-turning allure Aspen or Vail do, its red-rock scenery is second to none. It’s part of a 30,000-acre Navajo Tribal Park established in 1958 and located on the border of Arizona and Utah within the 16 million-acre Navajo Reservation. Plus, unlike the summer when the desert dry heat takes an immediate toll, temperatures in the low to mid 70s are more than desirable.

Getting there: The park and visitor center is on U.S. Highway 163 and is 25 miles from Mexican Hat, and 51 miles from Bluff. Plan on being there for at least four hours — there’s multiple points to see on the driving tour around the park and a pretty cool gift shop that’s awesome to look at even if you don’t buy anything.

Cost: Solo travelers see a $10 admission fee, with a per-car fee of $20 applying for carloads of up to four people.

Jon Mitchell is a page designer, photographer and writer for The News-Review. He can be reached at 541-957-4214, or at jmitchell@nrtoday.com. Also, follow him on Twitter @byJonMitchell

I hiked Maroon Bells back in about 1969. I was 23, and in really good shape and a runner--but lived at sea level. The hike about killed me, and I was passed on the trail by rail-thin young women, often topless, wearing massive backpacks. That is no country for old men, and not for a lot of younger ones.