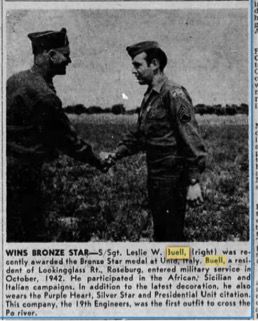 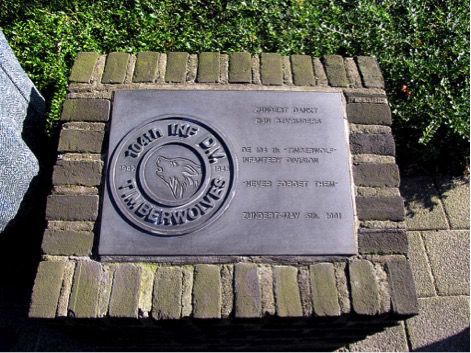 A Timberwolves patch like the one shown was worn by members of the renowned Timberwolves division in the U.S. Army during World War II.

A Timberwolves patch like the one shown was worn by members of the renowned Timberwolves division in the U.S. Army during World War II.

World War II dominated American life in the 1940s. Even tiny rural farm communities like those in Douglas County were deeply affected. For my mother, Martha Buell, childhood was shaped by war.

Mom grew up in Lookingglass Valley — one of eight children born to Roy and Hazel Buell. Leslie, Leonard, Raymond, Maxine and Lyle were the older kids with mom (Martha), Frank and Mary the younger kids of the family.

Brothers between 11 and four years older than Martha were heroes who protected, teased and loved her. As they grew and left home, she missed their light-hearted humor and consistent wisdom. When her older sister graduated, leaving home in 1942, there was plenty to do with two younger siblings, the last born when her mother was 43 and her dad 54 years old.

By 1943 all Mom’s brothers were soldiers. 12-year-old Martha and her mother, Hazel, took Red Cross first aid training that was promoted with these words, “In wartime where mass slaughter may become a daily occurrence, we need a Red Cross army of trained citizens … to protect American happiness and lives.”

Mom was proud to be a young certified Red Cross provider. Later, her mother and mother’s sister, Echo Dysert Heard, took airplane spotter training so they could assist in night sky observation for enemy planes from the Happy Valley tower. Mr. Ellison took the volunteers to Eugene and Portland. Nights away from home were common for the spotters; Young Martha rose to meet the need.

Mom’s dad, Roy Buell, was a volunteer who drove around the valley making sure everyone complied with blackout requirements. Night time duties were willingly accepted by the patriotic valley citizens. For a year, the mounted Calvary stationed at the current Umpqua Valley Art Building patrolled through Lookingglass Valley, passing Mom’s home on their way up to Reston to check the forests for fires.

Military correspondence was a treasure that made checking the mail an important duty. News was shared with The News-Review valley reporter, since many local boys were fighting.

Neighbors relished news about the war and local men and women. Whole communities kept track of where their boys were fighting and where women were posted with the Red Cross. Evening radio broadcasts were closely followed, with many comparing notes the next day among neighbors and friends. War bonds purchased in the names of soldiers were regularly printed in the paper. Money was scarce, but patriotism was not.

Food ration cards were collected to send baked goods to the soldiers, and because the Buell’s had three sons in active battle, the valley ladies were generous. Martha and Hazel baked many goodies, then packed and sent them overseas. Tobacco and smoking papers were gathered along with long letters written to each son by Hazel most every single day, then faithfully mailed.

Victory gardens were taken seriously. Every morsel of food not purchased meant there was more for the soldiers. Shoes, gas and tires were rationed so the soldiers could save the world from tyranny. For a young girl growing into womanhood, everything revolved around the war.

Dread came with the appearance of a taxi on a Lookingglass road, because taxis delivered cables edged in black announcing the death of a soldier. When that taxi was spotted, the whole valley mourned, but no one mourned alone. No one was forgotten.

Wonderfully, all the Buell boys came home. Leonard made sergeant in the 41st Division National Guard, fought in New Guinea and was badly injured in an accident, but he met his future wife in a military hospital as he recuperated.

Leslie made sergeant with 19th Engineers and fought through the famous Po Valley, receiving the Silver Star, Bronze Star, Purple Star and a Presidential Unit Citation. Raymond also made sergeant with the renowned Timberwolves Division, liberating a concentration camp.

Lyle was drafted at the end of the war, leaving his job as assistant medical examiner in Douglas County to serve in the military police, barely surviving a ruptured appendix, but coming home an accomplished motorcycle rider.

By the time all Mom’s brothers were home, she was 16 years old. Her transition years from childhood to womanhood were dominated by war, but she was not a victim of war. Her family and community accepted the challenges of privation and loss as necessary to assure freedom.

They learned new, important things. Fear was an ever-present companion but not one welcomed or coddled. Action was the treatment for whatever ailed those at home during the war, whether it was spotting planes or comforting those who were mourning. The whole community rallied as one.

Mother’s wartime years made her a person of positive action. Examples shown by her parents, relatives, neighbors and community demonstrated how love is lived. Patriotic passion for her country and its enlisted people has never waned. Coming of age during World War II was Mom’s teacher for life.

"...transition years from childhood to womanhood were dominated by war but she was not a victim of war."

Wendy Kang to step down as executive director at Saving Grace after 11 years
Behind the boom: What goes into setting up a fireworks show
© Copyright 2020 nrtoday.com, 345 NE Winchester St. Roseburg, OR | Terms of Use | Privacy Policy
Powered by BLOX Content Management System from TownNews.com.