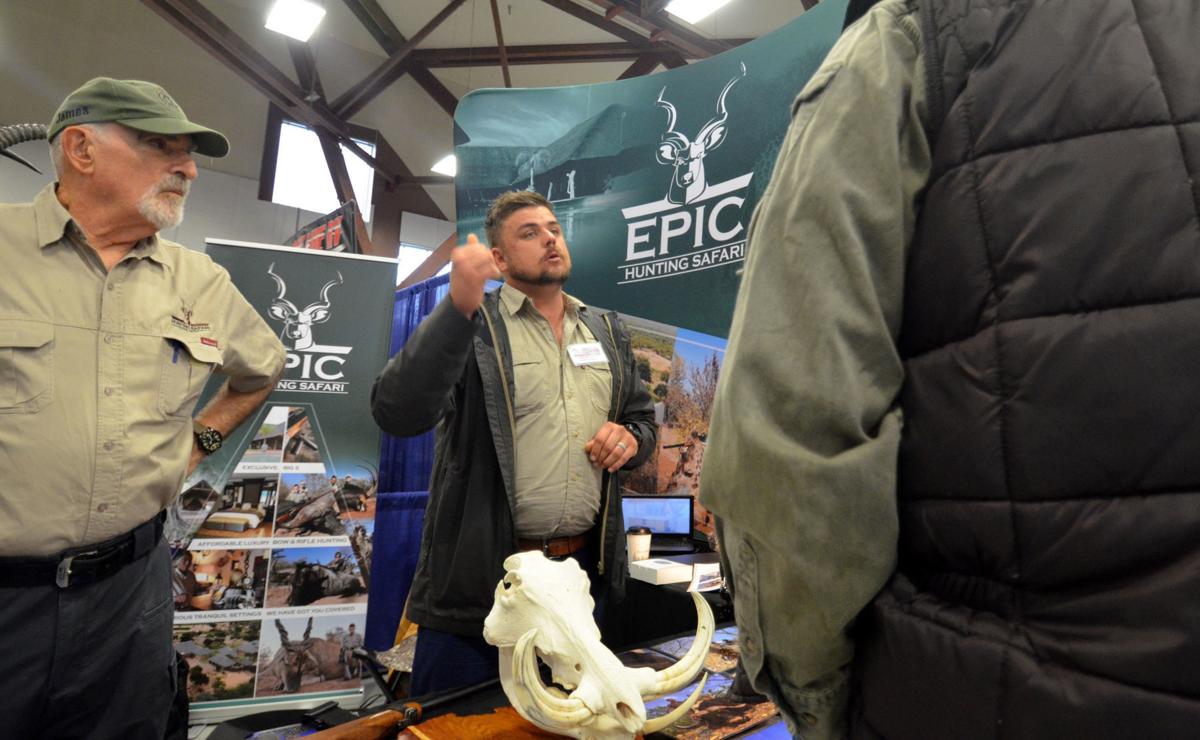 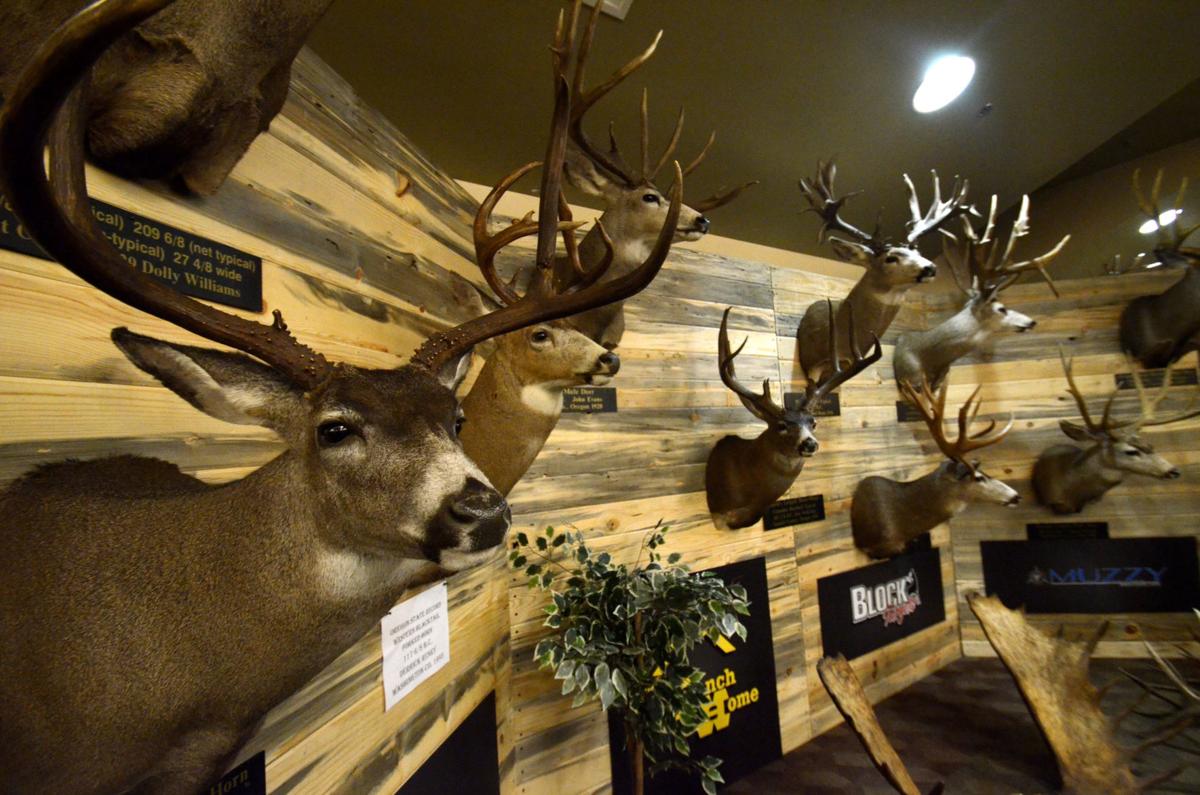 Multiple deer mounts sit on display during the Seven Feathers Douglas County Sportsmen’s and Outdoor Recreation Show on Saturday at the Douglas County Fairgrounds in Roseburg. The deer in the foreground was labeled as the world’s largest forked horn Columbia Blacktail, which was taken in Josephine County in 1938.

Multiple deer mounts sit on display during the Seven Feathers Douglas County Sportsmen’s and Outdoor Recreation Show on Saturday at the Douglas County Fairgrounds in Roseburg. The deer in the foreground was labeled as the world’s largest forked horn Columbia Blacktail, which was taken in Josephine County in 1938.

Rick Bunnell of Glide freely admits that the thing he was trying to sell Saturday afternoon was a luxury item.

He at least had the advantage of knowing a lot about it. After all, the hunting trip he was selling with Kalahari Hunting Safaris is one he’s gone on 10 times.

“Generally, it usually takes someone walking by who’s always had an interest in it, but hasn’t necessarily followed through on it,” said Bunnell, whose first-hand experiences with the Namibia, Africa, hunts were on display in photo albums at the booth. “When these booths are set up, usually you get a lot of people, but not a lot who are ready to commit.

“But then again,” he added with a smile, “you really only need that one guy. Maybe two.”

Bunnell and Carl Sheeon — who has been on the trip a whopping 17 times — were answering questions throughout the day Saturday during the Seven Feathers Douglas County Sportsmen’s and Outdoor Recreation Show at the Douglas County Fairgrounds in Roseburg. They were among at least four booths selling adventure hunts located outside the lower 48 states, all of which touted multiple hunt options along with big-game guarantees.

On the surface, it seems like a long shot at best for the big-game hunting companies to bag a substantial amount of revenue from the show. The most recent numbers distributed by the United States Census Bureau estimated Douglas County’s median household income at $45,812, with 15% of its 110,283 residents living in poverty, according to numbers as of July 1, 2018. That’s well below the Oregon median income of $59,393, which was also based on 2018 money.

That prompts the big-game vendors to sell the value of their adventures. Christoff Vandermerwe, a professional hunter with Epic Hunting Safari, who is a native of South Africa — where his hunts are based out of — said he’s seen reports on how the public is encouraged about the nation’ economic outlook.

The hunt packages he sells start at $5,200 for two people. That includes an opportunity to hunt and kill a blue wildebeast, a warthog, a blesbuck and an impala. Others include a crocodile and a cape buffalo and go for $23,000, but the company offers a chance to make a reservation up to two years in advance to give an opportunity to save for the trip.

“There’s lots of people who hunt within 100 miles of here,” said Jim Caplan of Roseburg, the retired forest supervisor of the Umpqua National Forest who has gone on the hunts. “This gives people a chance to do something new.”

Benny Sporer, the owner of DB Outfitting in British Columbia, said the Roseburg show is by far the smallest one he attends in an itinerary that includes shows in Portland, Sacramento, Houston and Redmond. But the Roseburg show is also by far the least expensive — his booth cost $350 for the weekend as opposed to the $1,000 price tag at other shows. That means if he sells one seven-day elk hunt in Roseburg for $8,500, his profit margin is much better than it is in bigger cities.

It’s the same for King Salmon Camp out of Nushagak River, Alaska. Owner Tyler Caskey touted a package valued at $3,300, which he said dwarfs other packages that reach $12,000. He also said he’s sold two packages here in two years of coming to the Rosbeurg show.

Plenty of local hunting and fishing guides will also be at the fairgrounds when the 43rd annual edition of the outdoors show concludes Sunday. The show includes food, recreational vehicle and ATV vendors, along with a display of rare deer, elk, bear and wolf mounts. They’ll be available from 10 a.m. to 5 p.m. Sunday for the show’s conclusion.