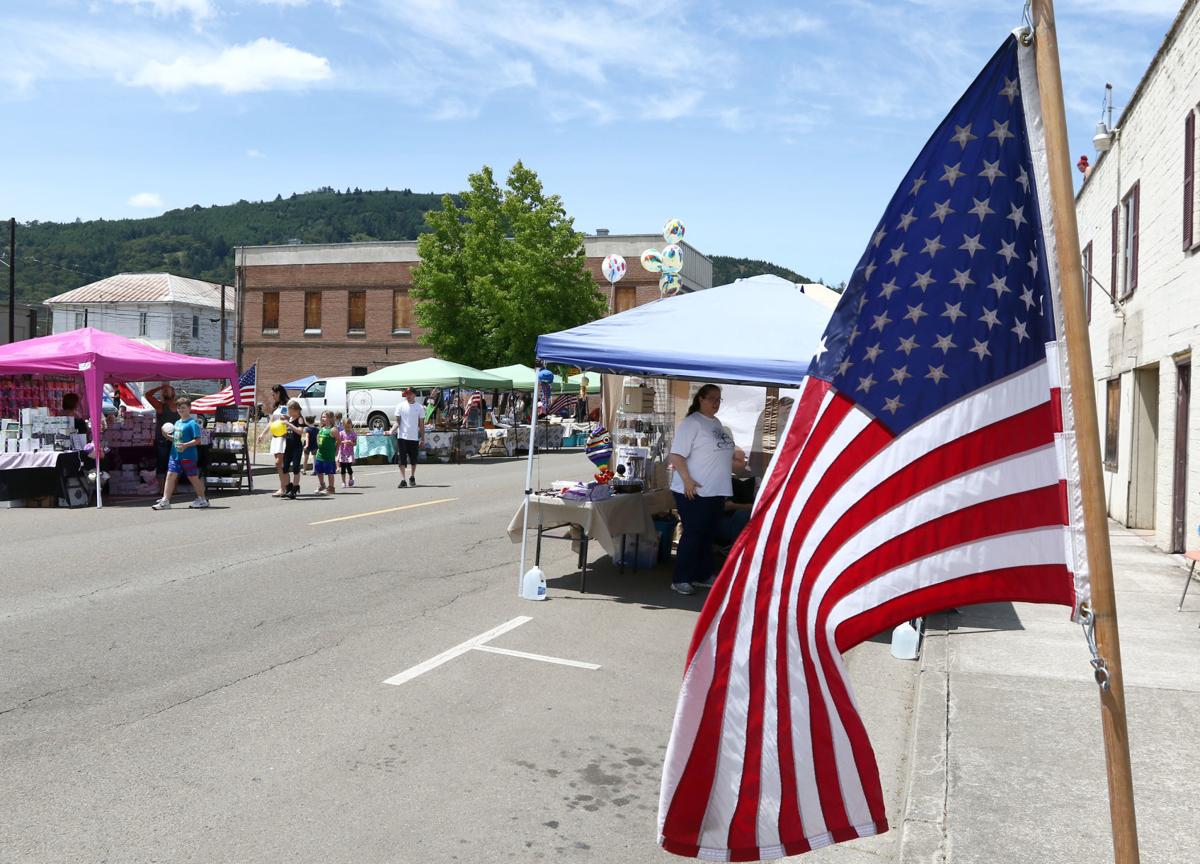 Visitors check out the booths lining Main Street in Riddle during the annual Sawdust Jubilee on Saturday. 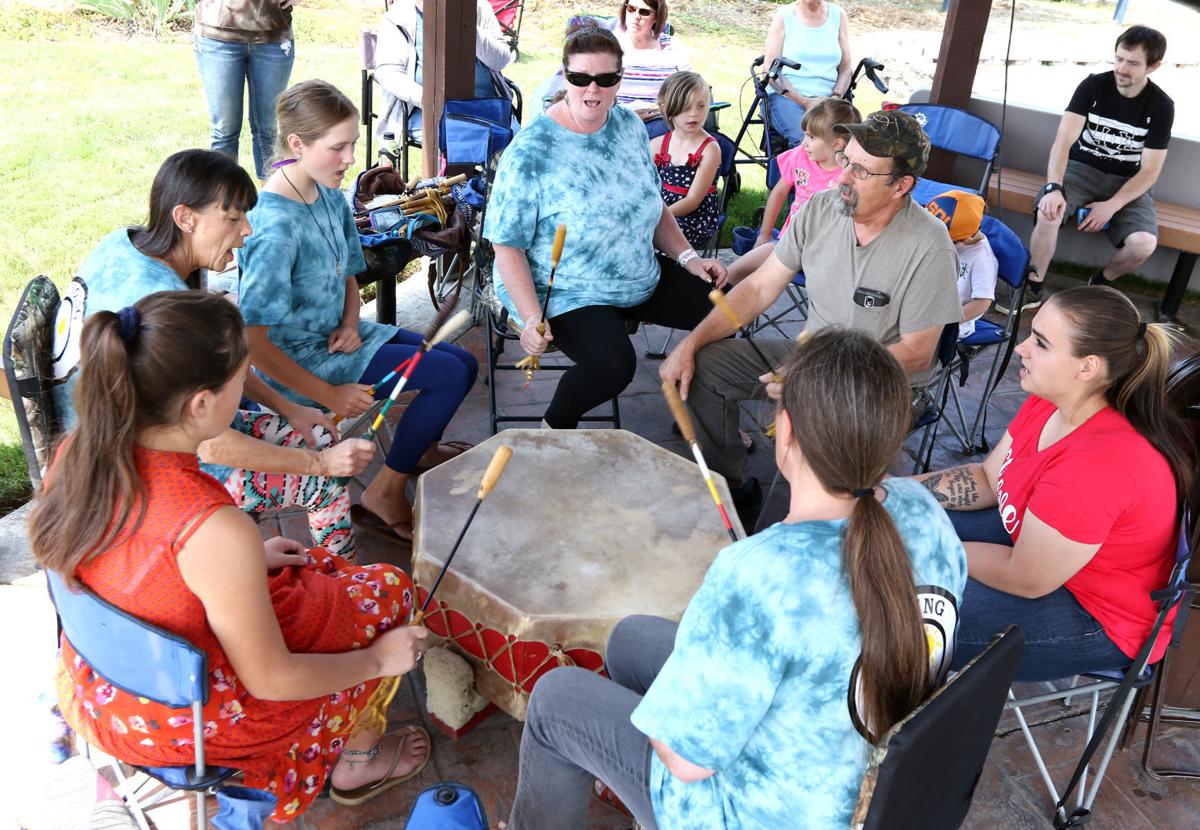 Members of the inter-tribal drum group ‘Singing Waters’ perform at the Sawdust Jubilee in Riddle on Saturday. 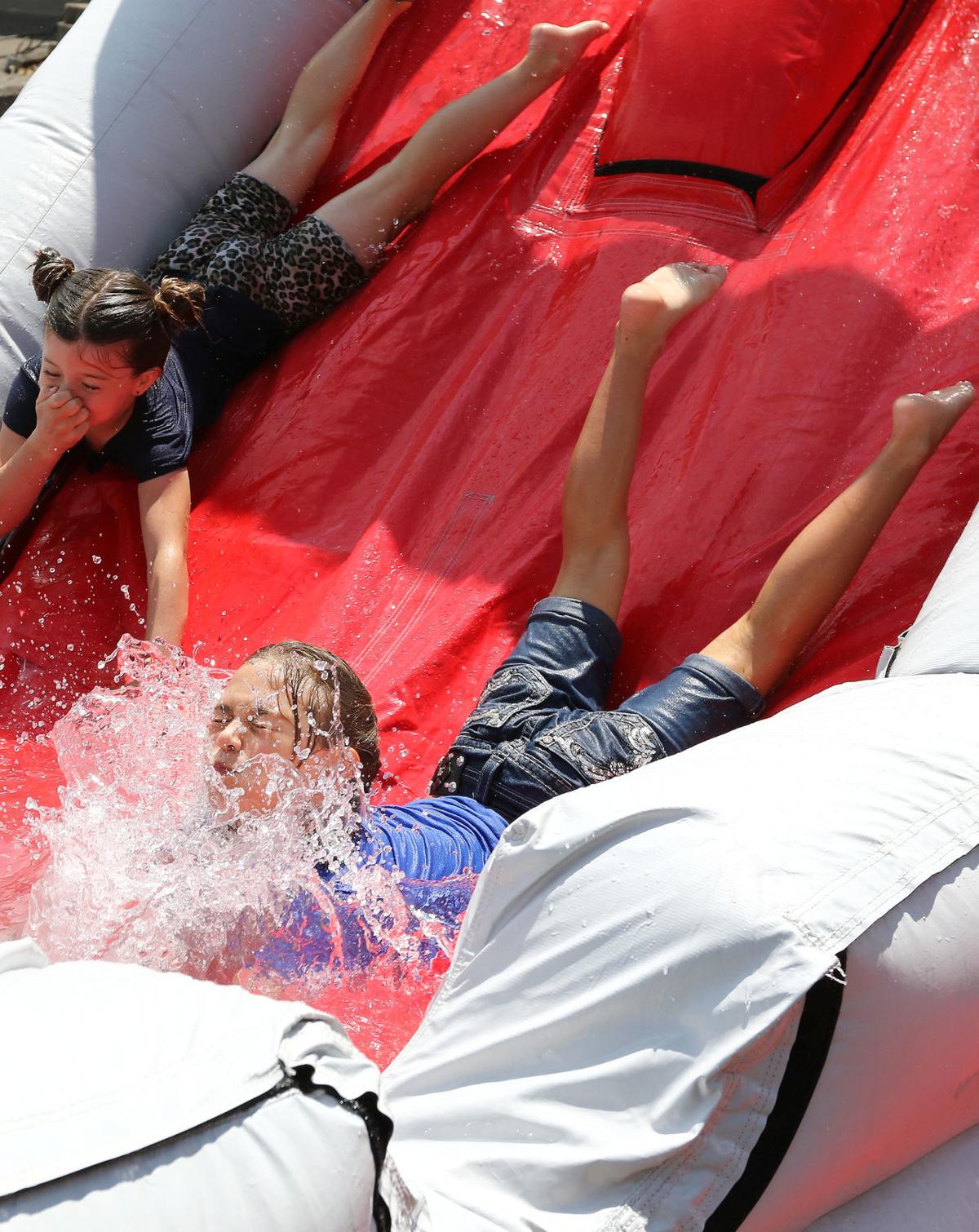 Kayleigh Frost, 7, of Riddle splashes down headfirst on a water slide at the Sawdust Jubilee in Riddle on Saturday.

Visitors check out the booths lining Main Street in Riddle during the annual Sawdust Jubilee on Saturday.

Members of the inter-tribal drum group ‘Singing Waters’ perform at the Sawdust Jubilee in Riddle on Saturday.

Kayleigh Frost, 7, of Riddle splashes down headfirst on a water slide at the Sawdust Jubilee in Riddle on Saturday.

RIDDLE — Lawn chairs and vendor booths lined Main Street in Riddle on Saturday afternoon as the town kicked off its annual Sawdust Jubilee to celebrate the South County town.

The morning started at the Masonic Hall with a community breakfast and softball tournament. Vendors opened their booths at 10 a.m., and the parade swept through Main Street by 11 a.m. featuring horses, fire trucks and classic cars.

Katrina Miller, of Riddle, said that seeing the community gather at the parade and fireworks show is her favorite part of the jubilee.

After the parade, there was a dessert auction on Main Street to raise money for the Chamber of Commerce and a performance from Umpqua Cheer in Turtle Park.

Throughout the afternoon, there were bingo tournaments, water balloon tosses and watermelon eating contests.

A pie in the face fundraiser, where community members could throw a pie in the face of the superintendent of the school district or the athletic director of the high school, took place at 3 p.m. for the first time in jubilee history. The fundraiser helped raise money for new flags to mark the entrance of the town of Riddle.

The night was to conclude with a performance by the Eddie Ross band at 7 p.m. and the fireworks show at 10 p.m.

Laura Hollifield has been running a cotton candy and popcorn booth at the jubilee for the past 18 years and said she loves talking with all the members of the community — especially the kids.

“We love talking to the people and seeing the smiles. The kids say ‘How do you do that? How does the cotton candy work?’ and we show them and give them a little sample. It’s just fun,” Hollifield said.

She said the coordinator of the jubilee, Shelley Martinez, has been working hard to make the event successful.

“She stays in contact with us and she’s really trying to bring this one back, because (the jubilee) was gone for a year and she worked so hard to keep it,” Hollifield said. “Her dedication is year-round, she works so hard on everything.”

In 2015, the jubilee was not held because of a lack of funding.

Some families have been coming to the Sawdust Jubilee for generations. James Hausotter, of Riddle, said he was the third generation of his family to live in town and is the owner of Hausotter Ranch.

“You see that bare hill over there, you can see the trees on it. That’s the ranch,” James said. “Been there since 1935.”

He and his wife, Terri, attend the jubilee each year, but said their favorite memory was watching James’s grandmother, Ruth, ride through the parade on a float in the early 2000s.

“I remember that. That was a favorite time for everybody. Everybody came out to see Grandma,” Terri said. “My grandma was the grand marshal” James said. “She lived here all her life and she’d done a lot of stuff.”

Hannah Kanik is a general assignment reporter for The News-Review. She can be reached at hkanik@nrtoday.com and 541-957-4210.

Marissa Meyer - CEO of Yahoo! , is advising people to start "Work at home" practice, that I have been doing for over a year now. This year alone, I made about $36k so far with nothing but my computer and some free time, despite that i have a full-time 9 to 5 job. Even people new to this, can make $50/per h easily and the earnings can go even higher over time... This is how i started... ======>>>>webwork.com