A document obtaind from the Douglas County Jail shows bail posted due to ‘COVID-19 Matrix,’ meaning inmates must be released to ensure social distancing in an effort to prevent the spread of the new coronavirus. 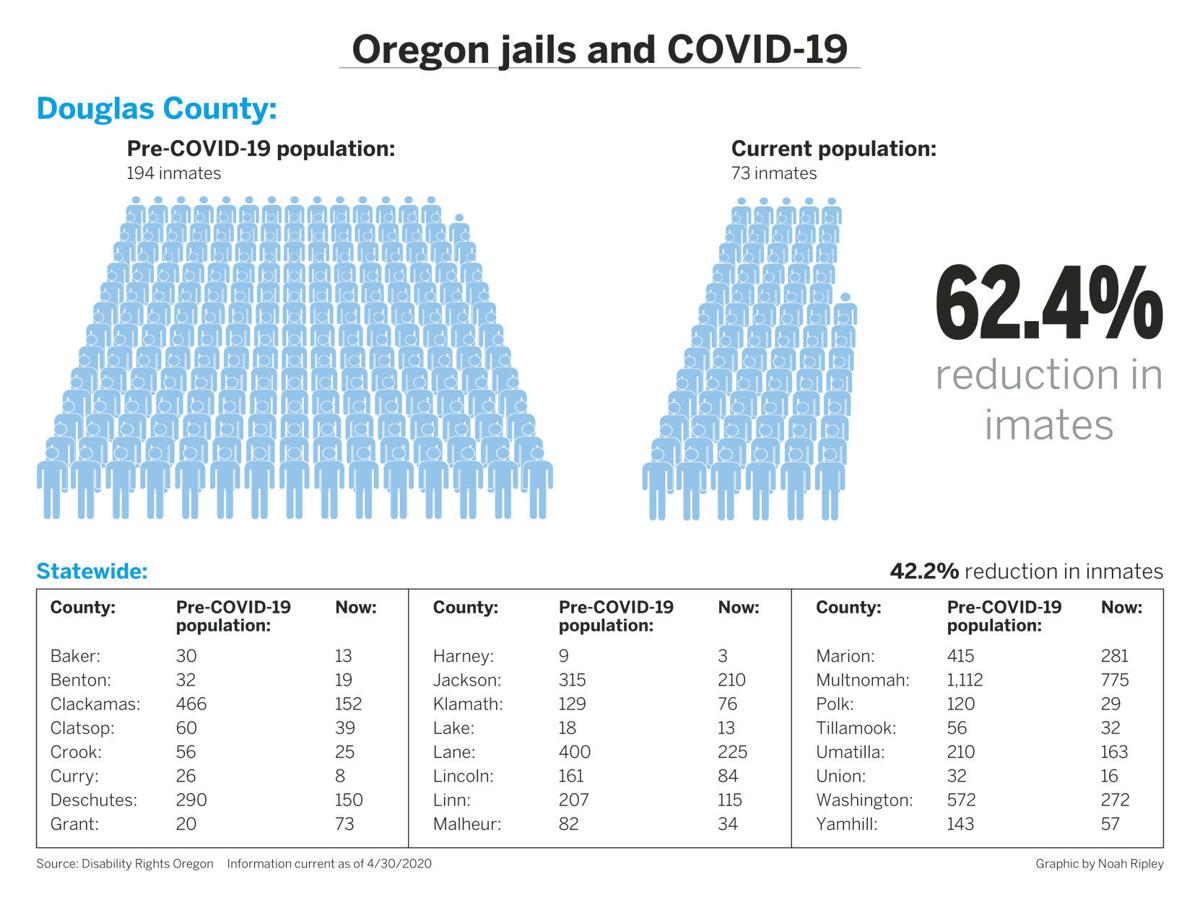 Statewide, jails have seen a reduction of inmates since the beginning of the COVID-19 crisis in America. 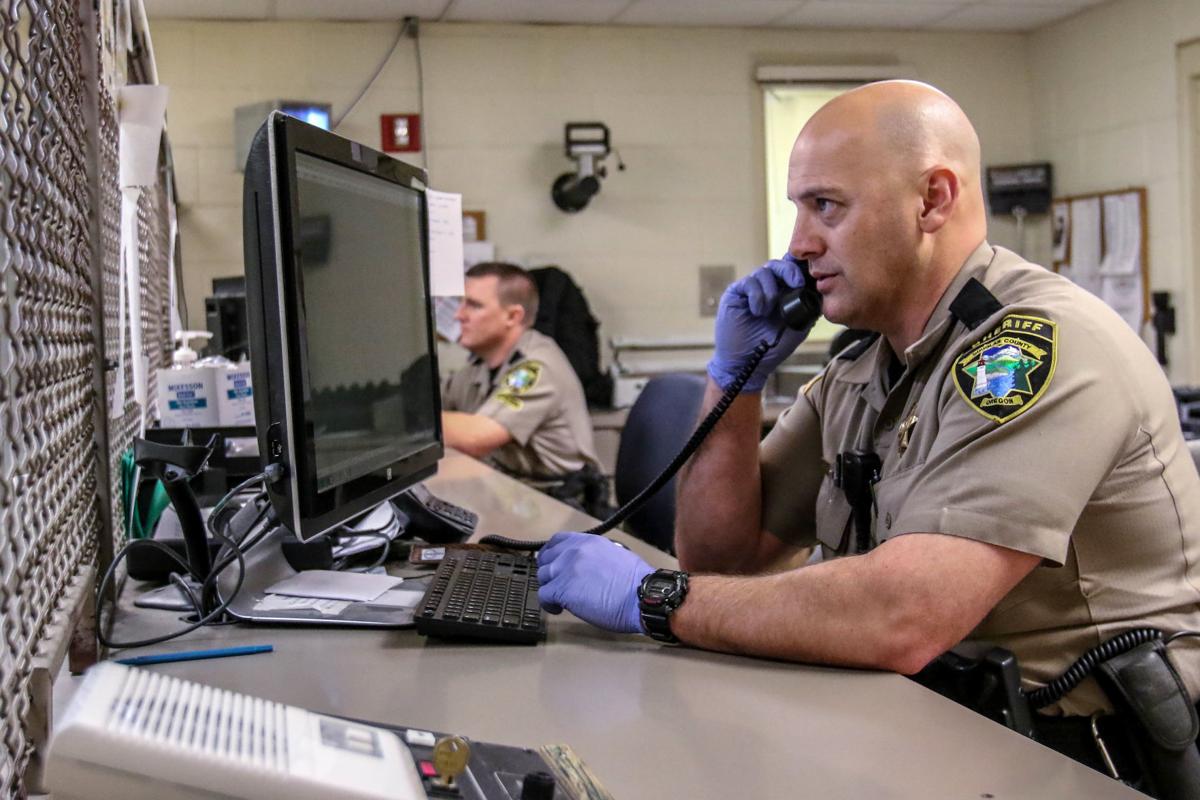 A document obtaind from the Douglas County Jail shows bail posted due to ‘COVID-19 Matrix,’ meaning inmates must be released to ensure social distancing in an effort to prevent the spread of the new coronavirus.

Statewide, jails have seen a reduction of inmates since the beginning of the COVID-19 crisis in America.

By all accounts, Brock Blumenthal probably should not be walking around the streets of Roseburg, where he is a threat to himself, others, and property, especially store windows.

Blumenthal, 31, has a habit of breaking storefront windows with his head, which he did at least three times in April alone. After one such incident, he was taken to CHI Mercy Medical Center “due to severe lacerations, and caused several thousand dollars damage,” according to reports from the Roseburg Police Department.

When he doesn’t use his head, he uses other objects. Late last month he reportedly used a metal grate to smash the window of The Hub Barbershop on Jackson Street downtown, causing an estimated $1,300 in damage.

When questioned by police, Blumenthal said he used the grate “because he was tired of using his head because it hurt,” according to court records. “He also said breaking windows makes him feel like a new person.”

Although he admitted to breaking the window and causing other property damage nearby, Blumenthal was cited and released because the jail was too full to house him, according to court documents. Blumenthal was arrested the next day and taken to jail. But again, because the jail had no room — in large part due to measures taken to fight the possible spread of COVIC-19 — Blumenthal was released three days later, after promising to appear in court.

When Blumenthal missed his May 6 court date he was arrested and jailed again. That is where he remains today, facing 10 charges, including four counts of criminal mischief, burglary, theft, trespassing and failure to appear. His attorney filed paperwork arguing that Blumenthal is mentally unfit to defend himself.

Blumenthal’s situation, while extreme, is not isolated. The Douglas County Jail is housing less than half the inmates it did before COVID-19, due to social distancing requirements. With the jail full, fewer people are being arrested. In Roseburg, for example, arrests are down 40% from the same time last year. Patrol officers have to balance jail space with public safety concerns.

In one 12-hour period this week in Roseburg, police logs show that officers responded to a dozen incidents involving a total of 17 people who were charged with breaking the law. All but two were cited and released. The charges brought against those released included one group of four who were littering and defecating in public, three people with outstanding warrants and one person who was driving on a suspended license.

Other individuals who were cited and released over the last couple of months include a man who threatened to kill a store employee and his children and tried to start two fights; a man charged with animal abuse after kicking two dogs 10 times each in the head and neck; a man found with over an ounce of methamphetamine, along with cash, scales and packaging; and two men, both felons, who tried to pawn a pistol but got spooked and left it on the counter.

“It’s extremely frustrating,” Roseburg Police Chief Gary Klopfenstein said recently. “We want to find justice for people. This is our community. We take great pride in ownership in it, and when you’re hamstrung like we are, it’s really tough.”

Empty the jailsThe squeeze on jail space due to COVID-19, and accompanying efforts to address that shortage, is not just happening here.

Law enforcement officers across the state are issuing citations for nearly all misdemeanor crimes, giving people dates to appear in court instead of making arrests and taking them to jail. Officers still arrest people for misdemeanor allegations related to domestic violence or other violent or life-threatening crimes.

At the same time, many jails in Oregon worked with courts, the local district attorney and public defender, and law enforcement to significantly curtail their admissions criteria, turning away arrestees who are charged with minor or nonviolent crimes, or who show signs of mental illness, according to a survey of 26 jails in the state.

The survey, conducted in April by the Portland-based group Disability Oregon Rights, also found that many jails worked collaboratively with the courts and attorneys to release people with a short time left to serve or who could be safely supervised in the community.

As a result of these actions the average daily population of Oregon’s county jails has dropped nearly 45% since COVID-19 forced widespread societal changes in March, according to the Oregon State Sheriffs’ Association. The sheriffs’ association said most jails are providing single cells for each inmate, limiting capacity.

In Multnomah County, the two adult jails are running about 62% full compared to 92% in early March, when the outbreak was just beginning to spread in Oregon. The jails have just under 1,200 beds combined.

In Clark County, the jail released nearly 200 inmates in a three-day period.

Early on, the Oregon State Sheriffs’ Association began coordinating with law enforcement throughout the state to come up with new policies and procedures to deal with the crunch on the jails.

Those discussions, which began around mid-March, have produced a consistency in jail plans and protocols, Myers said.

“All jail commanders are talking and communicating and sharing best practices,” he said. “In the beginning the protocols grew and changed, but now they’re pretty well established.”

Those protocols include social distancing within the facilities, single bunks as opposed to double bunks, constant hand washing and cleaning, and the quarantine of new inmates, Myers said, adding that those protocols may vary from jail to jail.

“The sheriffs have done an outstanding job in an unprecedented situation,” Myers said. “Everybody should be proud of the work they’ve done.”

More citationsDouglas County Sheriff John Hanlin said his agency worked closely with the county’s COVID-19 Response Team, the Douglas County Board of Commissioners, the county’s public health officer, the Office of Emergency Management, and other local and state authorities, including the sheriffs’ association, to develop new protocols.

That included screening everyone who entered the jail for the virus, stepping up cleaning and sanitizing procedures, and suspending most face-to-face inmate visitation and programs. Those protocols decreased the average inmate population from 190 in March to 80 in April.

“We communicated with our partner law enforcement agencies about the changes in the jail and requested law enforcement officers exercise discretion whenever possible on low-level offenses and issue citations to appear in lieu of booking and lodging in the jail, again to reduce the risk to those within the facility,” he said.

Local law enforcement officials said they are doing the best they can under a difficult situation.

Roseburg Police Sgt. Jeff Eichenbusch said decisions on who to take to jail and who to cite and release are fluid and made on a case-by-case basis. Police are issuing more citations in lieu of jail, but anyone considered to be a danger to themselves or others or who have committed crimes that create a risk to the community will be taken to jail, he said.

“We always have discretion whether to physically arrest someone or issue them a citation in lieu of, but we’ve lowered our standards right now,” Eichenbusch said. “We are lodging violent offenders and anyone who is mandated to be arrested by Oregon statute, but almost all property crimes or low-level misdemeanor crimes are being cited and released.”

There has been an uptick in several categories of nonviolent crimes, Eichenbusch acknowledged. For the months of March and April, burglaries are up 64% compared to last year, criminal trespass is up 29%, and criminal mischief is up 28%. At the same time arrests are also down, he said. In April of 2019, the department made 256 arrests, and this past April the agency made 155, he said.

“I would argue that the reduction in arrests has not affected public safety, as we are still lodging people who are a risk to the community, or are violent offenders,” Eichenbusch said. “Most of the people we are citing and releasing in the field are often quickly released from the jail during normal times, just based on the lower severity of crime.”

As Oregon begins to open up its economy and things slowly return back to normal, the shortage of jail beds should ease too, Myers and others said. The Roseburg Municipal Court just recently went back in session following several weeks of inactivity.

The Douglas County Jail should get back to normal, but exactly when that will happen is difficult to pin down, Hanlin said.

“If the coronavirus gets introduced into the jail facility, it will be very difficult to control within the close quarters of the facility,” he said. “As frustrating as these restrictions have been for the law enforcement community and our communities, I take my responsibilities seriously and I will always do what is in the best interest of those I am sworn to protect.

“Once it is safe to do so, jail protocols and operations should return back to a more normal flow, thereby allowing the population in the jail to be increased.”

A squeeze on jail space

The virus, economy, and lack of mental health services nationwide has forced our country to face an explosion of homelessness everywhere. Many https://www.npr.org/2019/11/18/780563103/oregon-law-meant-to-help-mentally-ill-has-ended-up-putting-more-of-them-on-the-s

The State is cutting the budget so it's going to get worse. https://www.thelundreport.org/content/oregon-health-authority-could-face-deep-cuts-behavioral-health-medicaid%C2%A0

So instead of putting the criminals at risk of the flu by locking them up...the county has decided to put the public at risk of crime and violence. The public is surely paying for the crimes of the criminals.

Carefully orchestrated to make people afraid enough to vote for the soon to be proposed public safety tax.

Does Mercy Hospital have a Mental Health inpatient ward?

So begins the campaign for a new public safety tax to be put on the ballot.