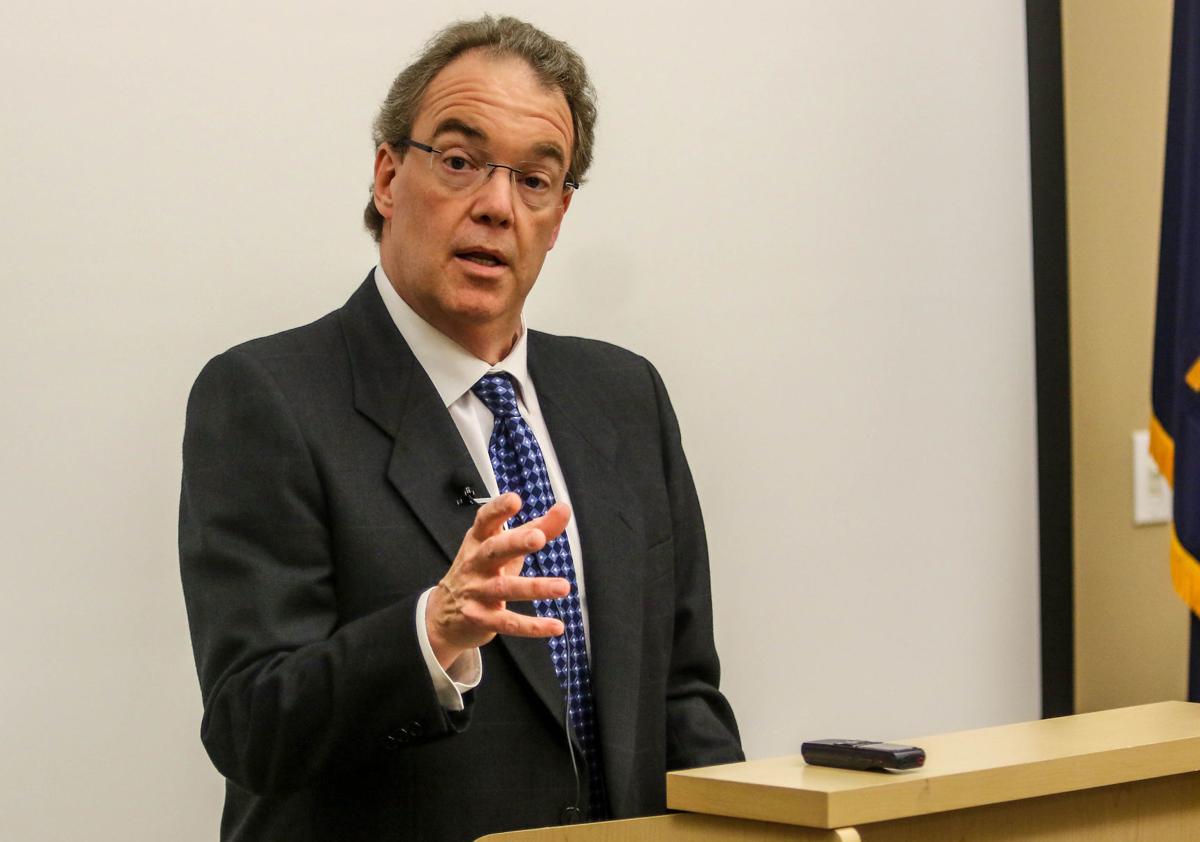 Douglas County District Attorney Rick Wesenberg announces all charges have been dropped against Nicole Engler during a press conference at the Public Safety Center. 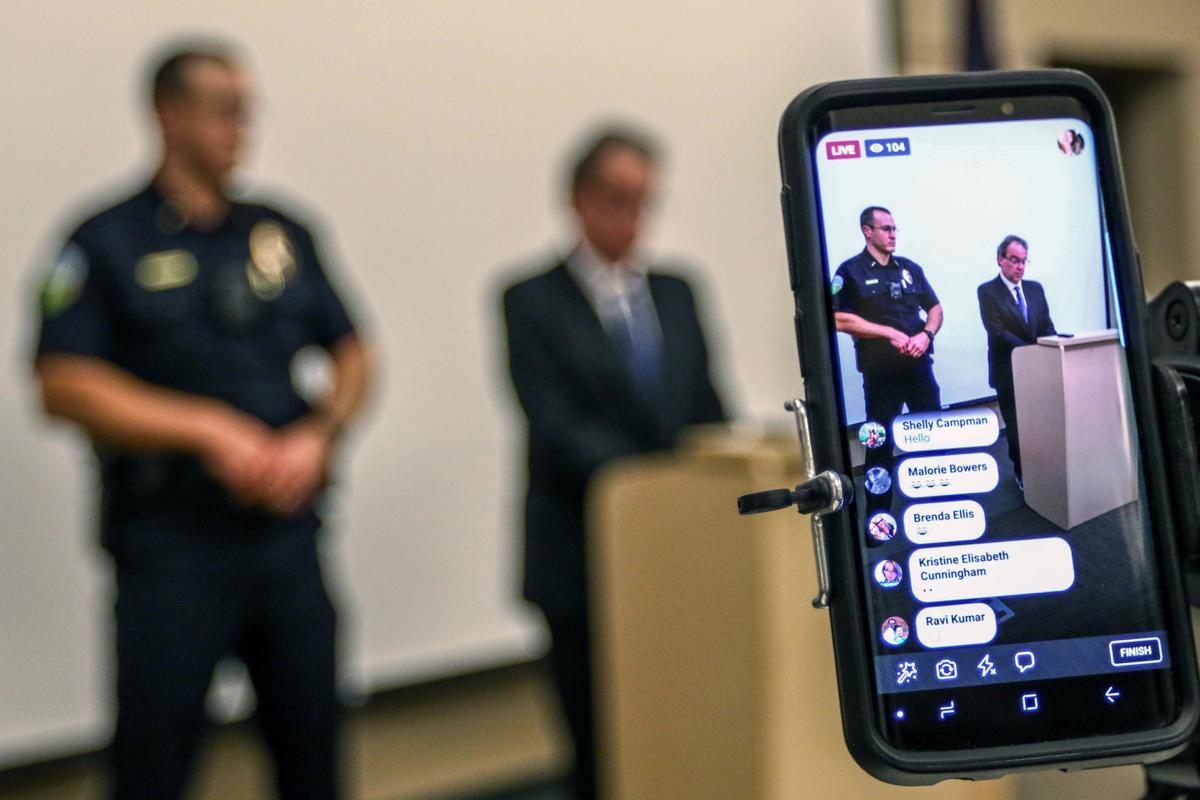 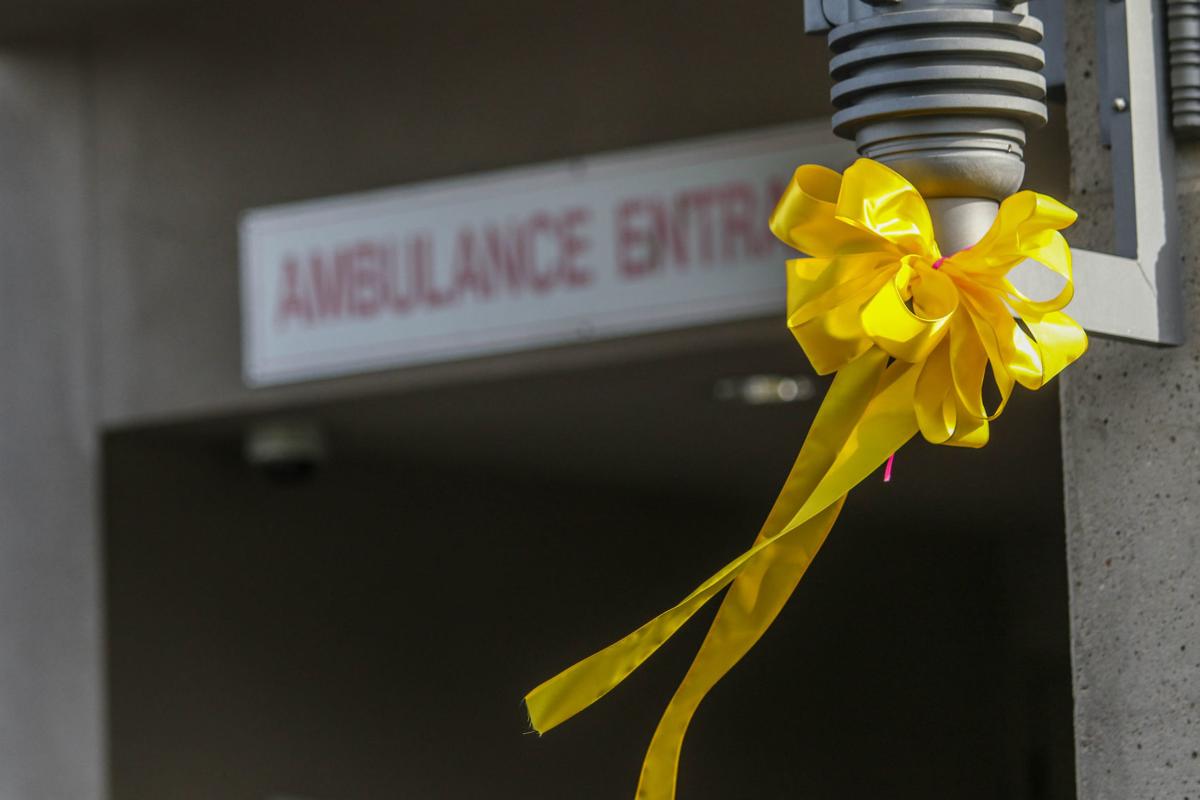 Yellow ribbons were hung outside the ambulance bay at Evergreen Family Medicine in Roseburg after the death of Nicole Engler’s daughter.

Douglas County District Attorney Rick Wesenberg announces all charges have been dropped against Nicole Engler during a press conference at the Public Safety Center.

Yellow ribbons were hung outside the ambulance bay at Evergreen Family Medicine in Roseburg after the death of Nicole Engler’s daughter.

The mother who was arrested for leaving her 21-month-old toddler in a hot car for several hours on June 21, resulting in the child’s death, has been cleared of all charges, District Attorney Rick Wesenberg said Monday.

The announcement regarding Nicole Engler’s case came during a press conference at the Roseburg Public Safety Center.

“I have decided I will not pursue criminal charges in this matter, and I have taken actions to dismiss the charge of manslaughter that was pending while the investigation was underway,” Wesenberg said.

He said his decision was not based on public opinion, but on the evidence, the limits of Oregon law and the likelihood of a conviction if it had gone to court.

“What happened was a horrible, tragic accident,” Terry said. “Any reasonable person who takes the time to investigate in an objective, professional, comprehensive way, there is no way you could reach a conclusion different.”

Wesenberg said he sought an expert opinion from a doctor who evaluated Engler’s mental state and consulted with people at the Oregon Department of Justice, who evaluated the evidence.

“There is no evidence, nor do I believe that Nicole Engler was consciously aware that Remi was in the car when she parked for work that morning,” Wesenberg said.

Wesenberg said Nicole Engler woke up on the morning of June 21, finding her husband Peter Engler still asleep after working the late night shift at Mercy Medical Center. She prepared the child for day care, put her in the rear facing car seat and left home with the intent to take Remington to day care.

He said within minutes of leaving home Nicole Engler had a lapse of awareness and forgot that Remi was in the car. She passed the turnoff to day care and went directly to work at Evergreen Family Medicine.

Around 10 a.m., Wesenberg said Engler had one of her patients cancel, so being tired from staying up with the child during the night, she returned to her vehicle go to a coffee stand. Still there was no sound from the child to alert her, and she went back into work.

After a fairly cool morning, the hot sun came out after the cloud cover burned off and she didn’t discover the child in the vehicle until she left work late in the afternoon during the hottest part of the day, when she discovered her daughter, Remington Engler, blue and unconscious inside the car.

Engler rushed Remington inside and attempted to revive her, but the girl later died at Mercy Medical Center, according to court documents. Engler told police she thought she had dropped her child off at daycare.

“If you have ever heard a scream that just curdles your brain of a mother coming in screaming about her child, you can’t get that out of your mind,” Evergreen Family Medicine President Tim Powell said in June.

Wesenberg said Monday that a urinalysis showed that Engler had consumed marijuana lawfully, some time before the incident but was not impaired on the morning of June 21.

“My initial struggle with this case was that I simply could not accept that a parent could forget the most important person in their life,” he said. “In this case all the evidence indicated that Remi was loved and cared for in every way a mother and father could.”

Wesenberg said his decision was not swayed by letters he received from those who felt Engler should be prosecuted and those that encouraged dismissal of the charges.

“It was based on evidence and the law that applies to this case,” he said.

“I’m really proud of the job they did and when you see DA’s do their job well with integrity and respect for all involved, it’s pretty cool to see,” Terry said.

For the Englers, their lives will never be the same, he said.

“No, absolutely not, Remi was the light of their life, and everything they did, how they fixed up their house, the trips they planned and the routines they formed, were all built around Remi,” Terry said.

Engler, a family nurse practitioner at Evergreen Family Medicine on Edenbower Boulevard, has lived in Roseburg for nearly four years since moving to the area from Salt Lake City. She graduated from nursing school in 2005, received her master’s degree in nursing in 2009 and has worked in pediatrics, women’s health and family practice, according to Evergreen’s website.

A few days after the incident, Terry asked to have the case dismissed because Engler had suffered from lapsed memory that day.

According to Gene Brewer, an Arizona State University associate professor of psychology who researches memory processes, forgetting a child in the car can happen to anyone.

“Memory failures are remarkably powerful, and they happen to everyone,” Brewer said. “Functionally, there isn’t much of a difference between forgetting your keys and forgetting your child in the car.”

Your auto correct is making changes that are not correct.

Bohica13 No one said anything about a molester except you. The child is dead. The death may or may not be accidenrial. Regardless accidental or not accidental the crime is manslaughter. Do you think everyone whose driving results in the death of another person is intentional? Of course, it is not. The court still investigates and often prosecutes these cases. The DA's comments in this decision are vague and non conclusive. The child deserves better. The citizens of Douglas County deserve better. What is the entire story? What was discovered during the investigation? From reading this article, no one really knows. It is a shame the DA's office did this deceased child a disservice. I am not saying the mother should be sent to prison. I am saying a thorough investigation that results in a just and logical conclusion should be reported. The citizens have a right to know. The DA is neglecting his duties to the community and a deceased child.

You'll have to excuse (and take with a grain of salt) Bohica13's comments...he often gets a bit sidetracked and trolls (quite a bit) on here. ;-)

I think TLH has smoked too much THC.

Sorry...just like your other comments...a complete FAIL...from the lack of knowledge.
Never touch the stuff...voted it down...and have seen enough dope smokin' idiots, like this negligent mother, to know better. Speakin' of idiots...the more you type, the more the readers don't have to think about you...they KNOW.

He said she should never be trusted around children. Totally irresponsible statement. I've landed in a nest of feckless, cold hearted lynchers. No compassion. No forbearance, and NO forgiveness. Those who show no mercy deserve none!

I could see the lapse in judgment the first time she drove to work and forgot to drop the child off, but the second time she got in the car to drive to get coffee - and she never noticed the child then, either because she never looked in her rearview mirror? She should not be driving.....

I agree.
This is not public opinion..
This is a broken justice system and paying off the right lawyers.
Everyone in jail for this should be released right?
Justice for ALL or justice for NONE.
This mother is NOT the Victim..
No justice for this baby girl..

More preventable ignorance and neglectful parents..
.she never once called to check on her daughter?.. I call my son every break.. He's 12..
When my son what that babygirl's age.. I showed up and called randomly.. I trusted no one with my son.

This just proves.. Money talks and bs walks..
It's not justice for all... Just whom can afford it.. It's who you know and what you did.

I thought the same thing, until I found out that the car seat was turned around backwards (like an infant seat) and not facing the rear view mirror

This is a compassionate and just decision not to prosecute. Nothing will punish this woman more than her internal guilt. I wish her and her husband peace of mind and mercy.

Even more troubling, is to KNOW (without a shadow of a doubt) you have druggies working in your medical professions, in the community. (Ya I know, the other profession in the community are not immune to the scourge.)

It is manslaughter. Either voluntary or involuntary. Her actions resulted in the death of this child. Those are the facts. The DA's decision is wrong.

If you are wondering why, crime is so rampant in Roseburg and surrounding Douglas County, then take a hard look at the Judicial system; especially, the DA's Office. The need for a new DA is very evident in this case. Most others would get the book thrown at them, with lesser facts than in this child neglect case!!

We HAVE a judicial System BECAUSE of lynchers like YOU! Get off the moral high ground you sanctimonious creep, and grow a heart.

I have a heart...
For children, NEGLECTED by so-called parents, such as this monster healthcare worker. She should never be allowed around children...EVER again.

She's NOT a molester, fool. You're the monster. Who neglected YOU???