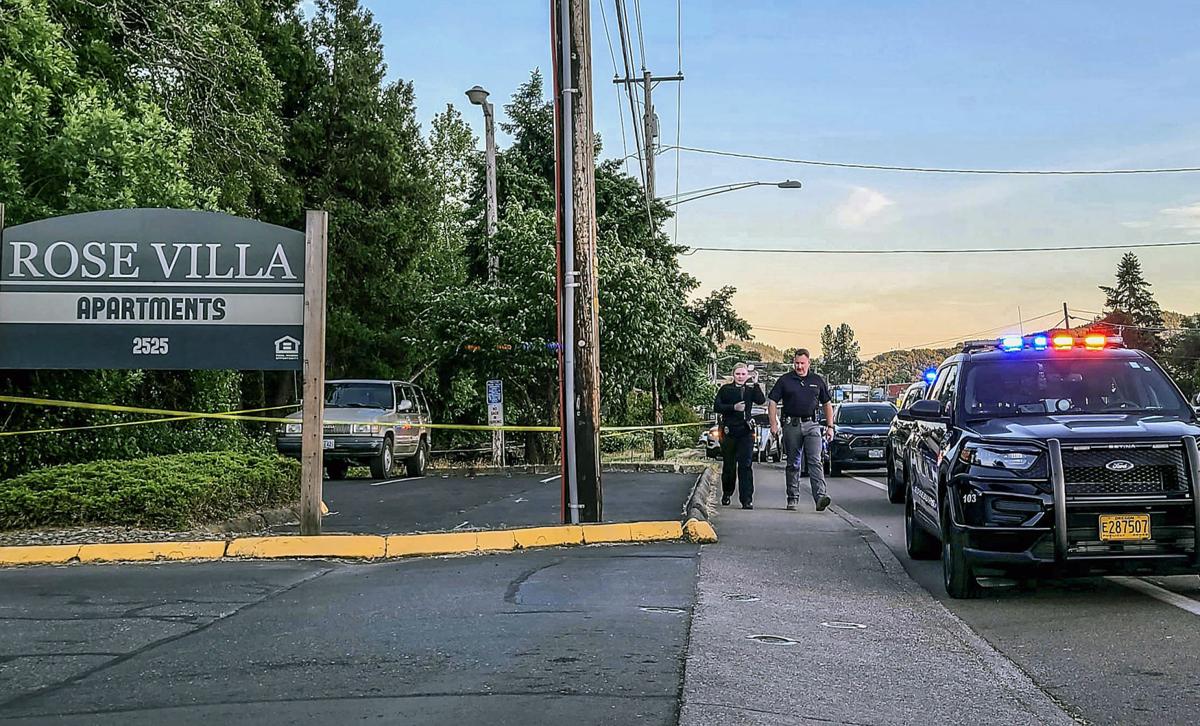 Police from multiple agencies investigate the scene where two men were shot Thursday at the Rose Villa Apartments. 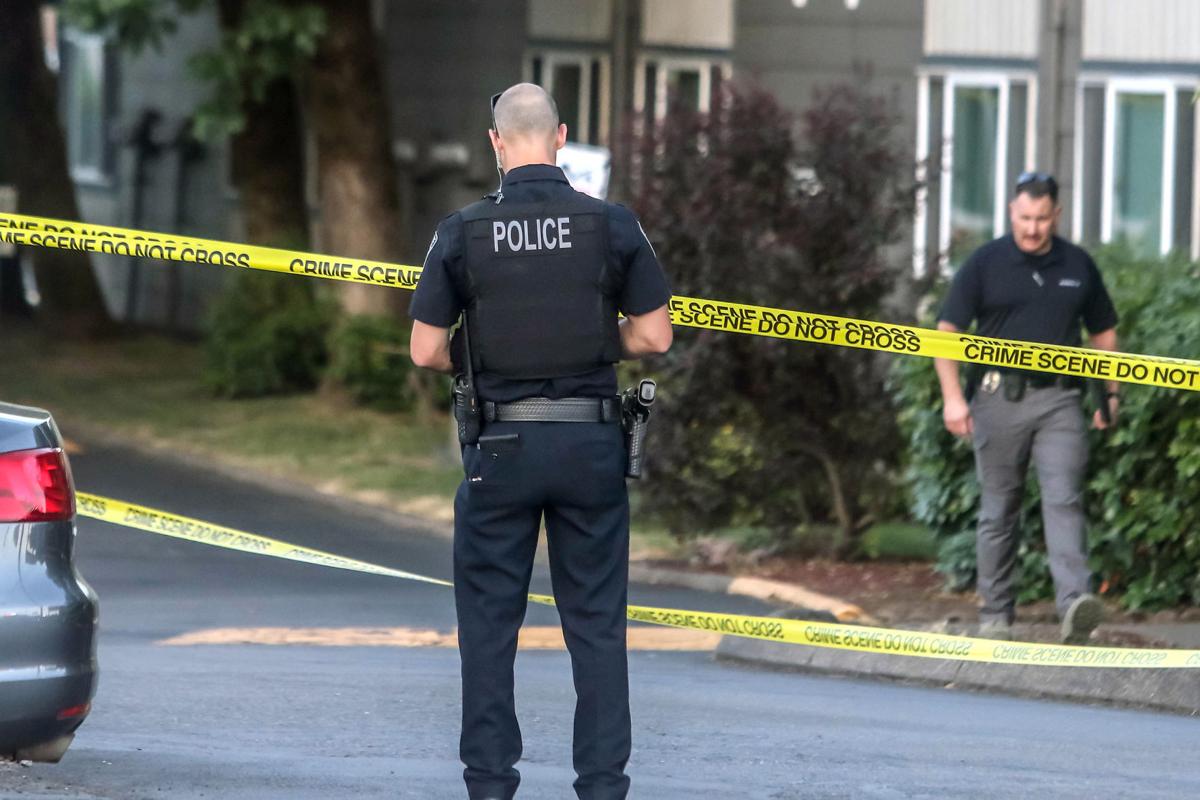 A Roseburg police officer monitors the crime scene at the Rose Villa Apartments on Thursday. 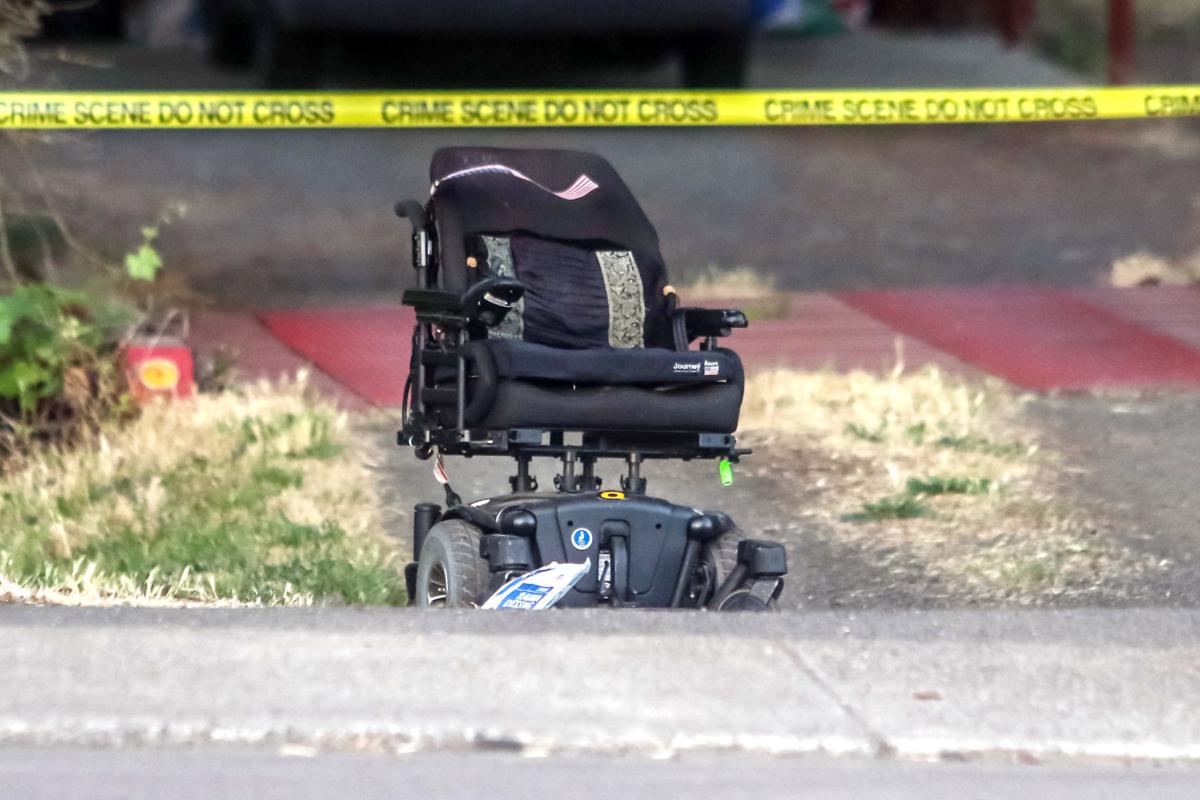 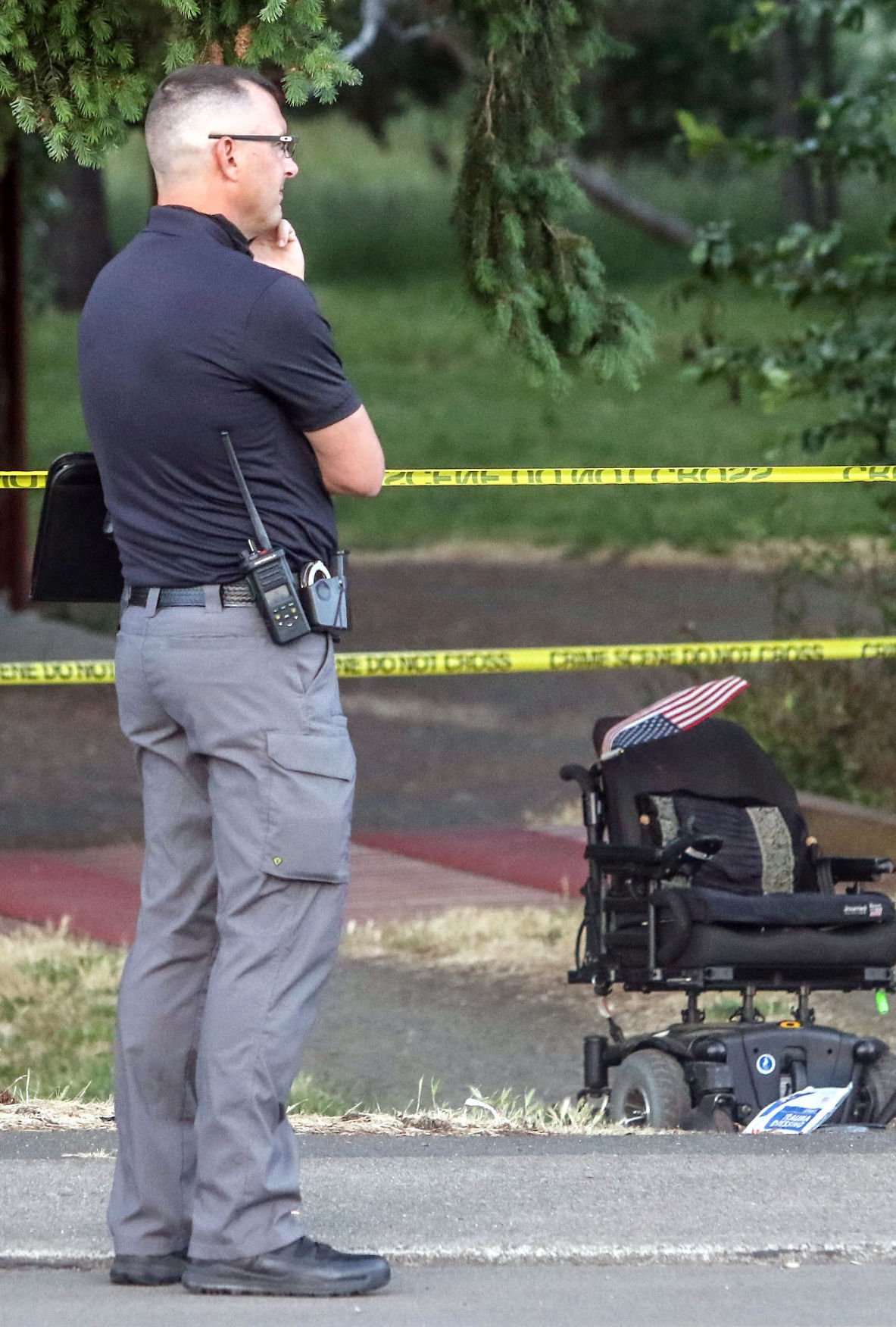 A police detective stands next to a motorized wheelchair positioned behind crime scene tape south of the Rose Villa Apartments on Northeast Stephens Street. 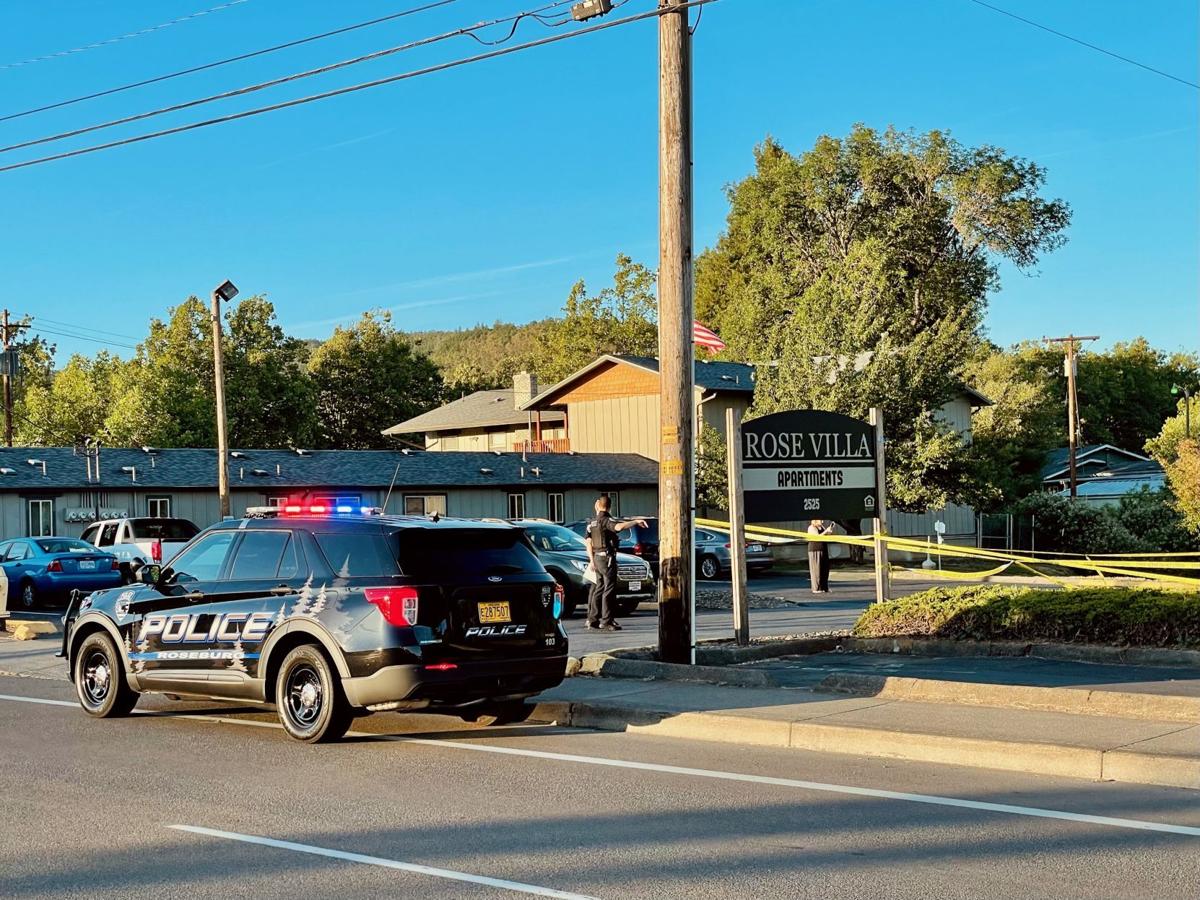 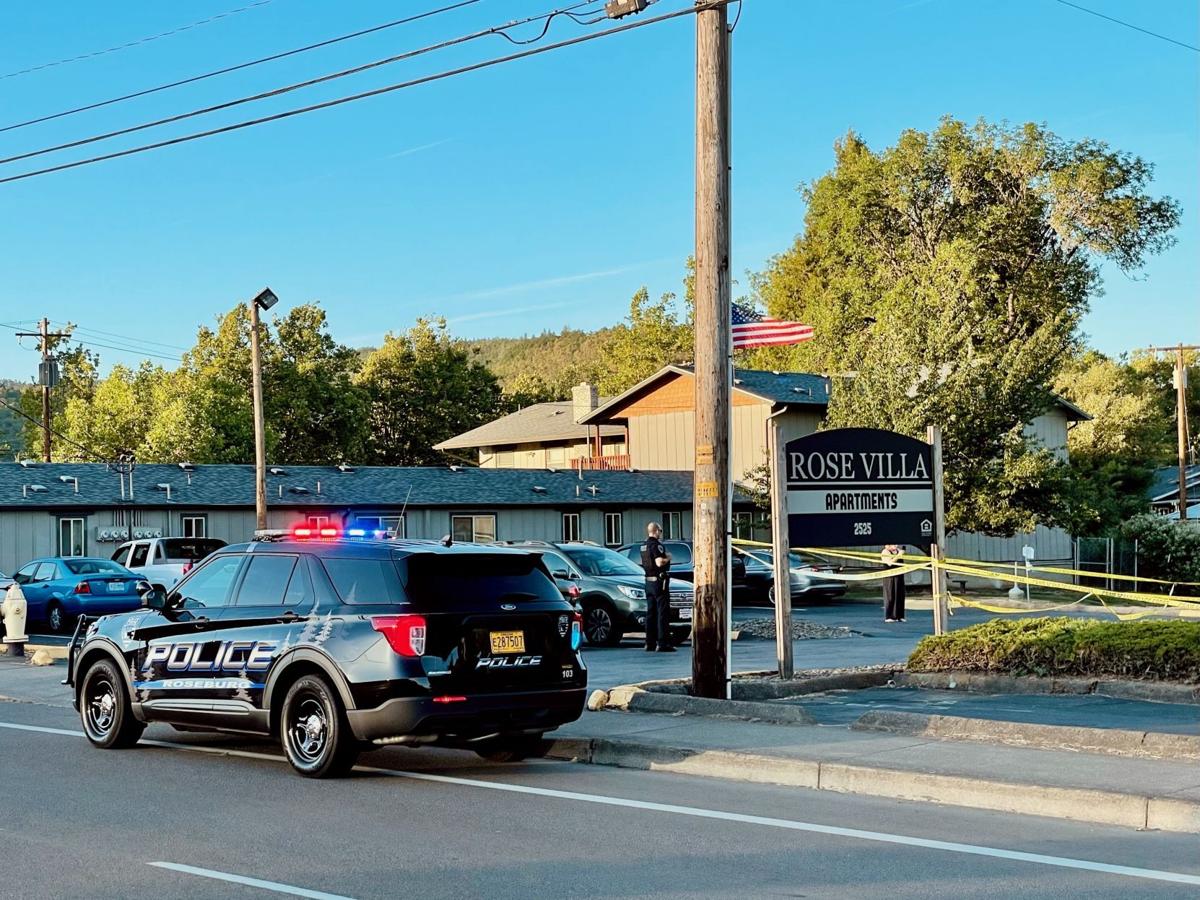 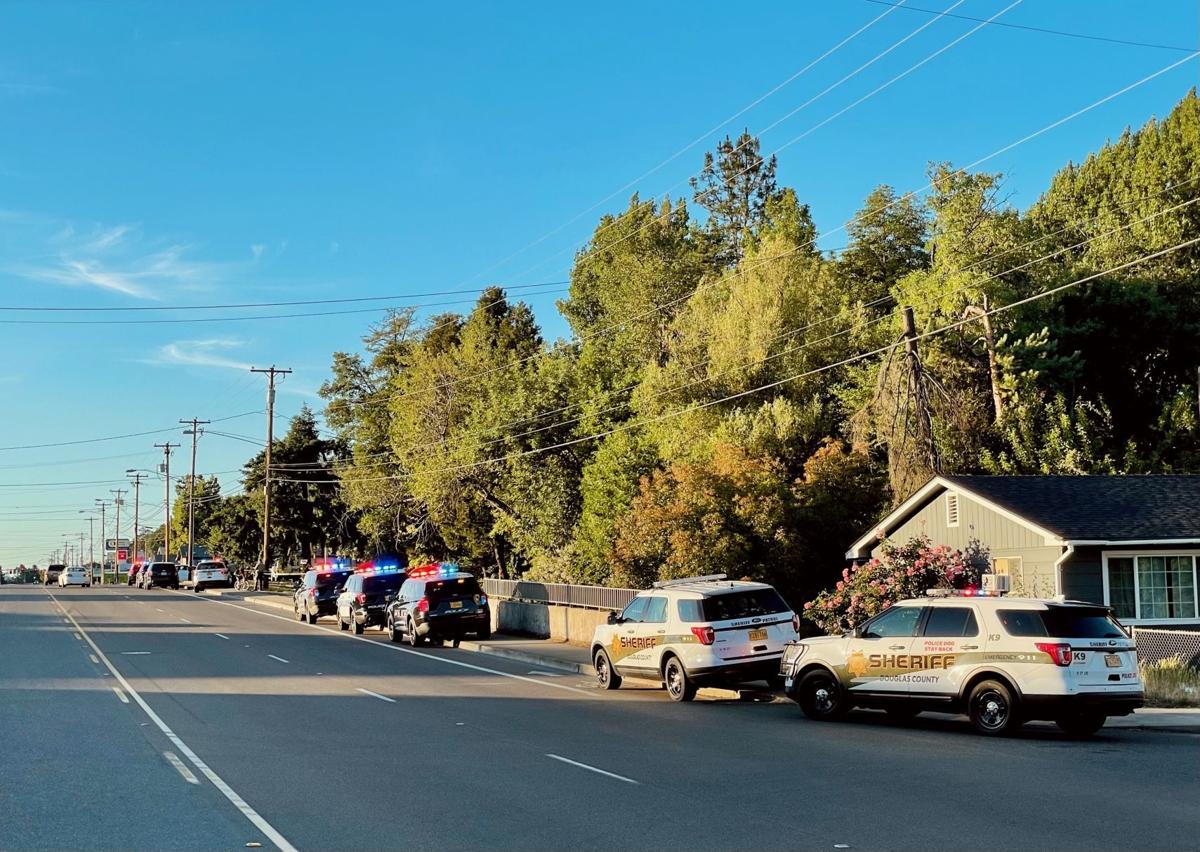 Police from multiple agencies investigate the scene where two men were shot Thursday at the Rose Villa Apartments.

A Roseburg police officer monitors the crime scene at the Rose Villa Apartments on Thursday.

A police detective stands next to a motorized wheelchair positioned behind crime scene tape south of the Rose Villa Apartments on Northeast Stephens Street.

One person is dead after a shooting near the Rose Villa Apartments on Northeast Stephens Street in Roseburg Thursday night, according to police.

Just before 7 p.m. police officers responded to the area after receiving multiple calls of shots fired in the area. Two Roseburg men — Terrence Wade Beason, 37, and Gregory Allen Bennett, 57 — were involved in the shooting, according to a press release. Both were flown to Legacy Emanuel Medical Center in Portland. Bennett eventually died from a self-inflicted gunshot wound. Beason’s condition is not known, according to Daniel Allen, a spokesman for the Roseburg Police Department. Allen said police believe the men knew each other.

Casandra Terra, a resident of the Rose Villa Apartments, had just pulled into her parking spot and was still in her car when she heard two sounds which she believed were firecrackers going off.

“I got out of my car and saw a young man walking toward the street limping and bleeding,” Terra said. “He says, ‘He shot me!’ and just kept walking, and his dad was following him on the scooter.”

Terra called 911 and entered her apartment when she heard a third gunshot.

A man who arrived on the scene moments after the shooting told The News-Review that when he got there, the man taken into custody had his hands in the air and a pistol on his hip. It was unclear at the time if that man had been involved.

Thai Thomas of Myrtle Creek described what he saw when he arrived in a parking lot across Northeast Stephens Street from the scene of the shooting.

“There was a guy walking away when the cops got him,” Thomas said. “He was just casually walking.”

Thomas described one victim lying in the grass next to another apparent victim on a motorized scooter. The victim on the scooter had a pistol in his hand, according to Thomas.

Am I the only one who noticed a gangster vibe in Roseburg for a long time? Threats, phone calls, freaky messages etc. At first I thought it was just jokes or pranks. So I pretty much laughed it off. But now all this serous crime really is happening in Roseburg. I sensed something very wrong 20+ years ago. I knew that people I met had a secret side-- perhaps gang related in some sense. Now it is more out in the open.

Bruh, we're getting an In-N-Out.

Please allow me to translate this, "Sir or Ma'am, I will be getting a job in the near future, and gout in the distant future."

Joke is on you, I already have gout.

Lol, you got me. Godspeed, you ninja.