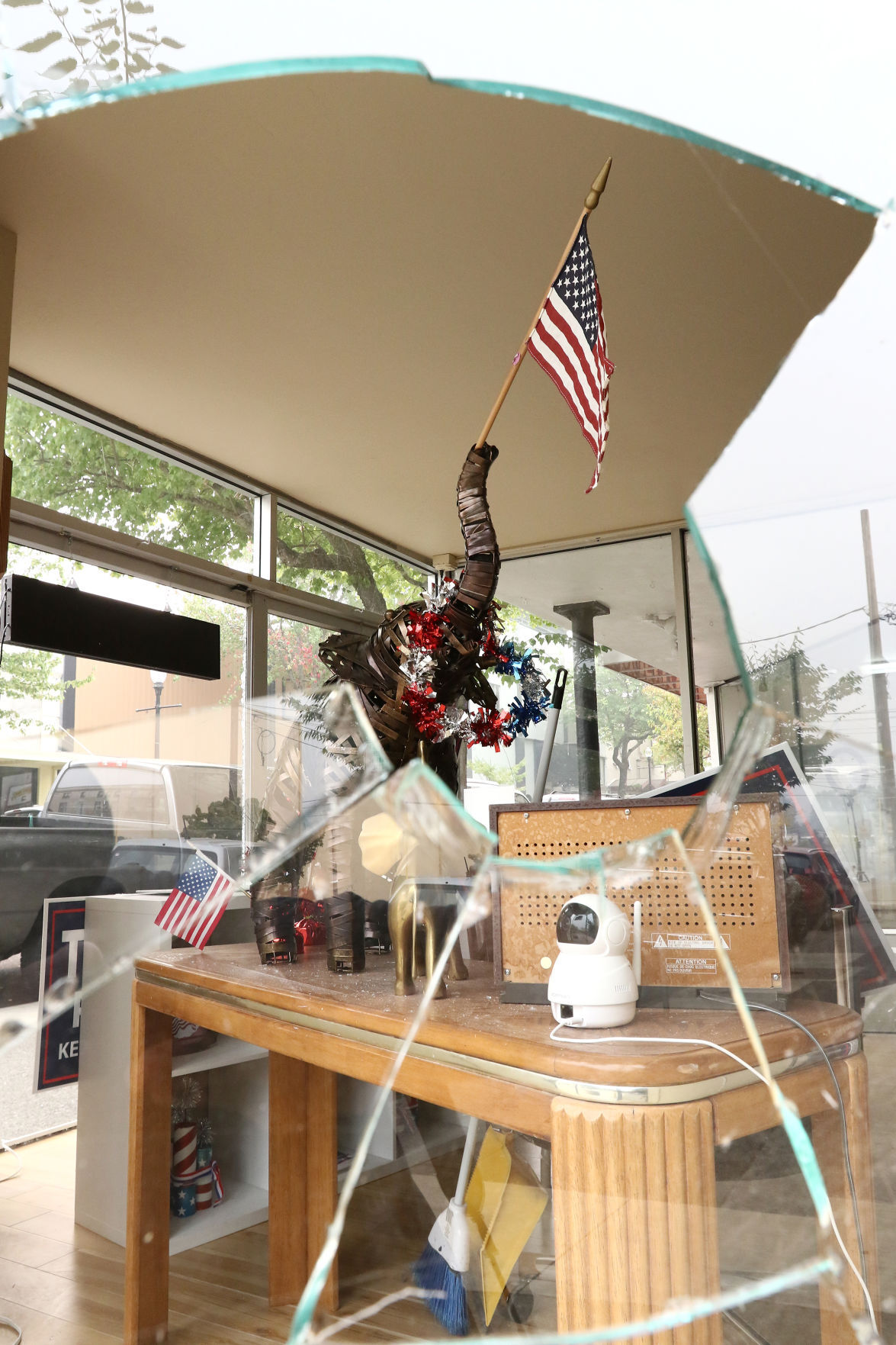 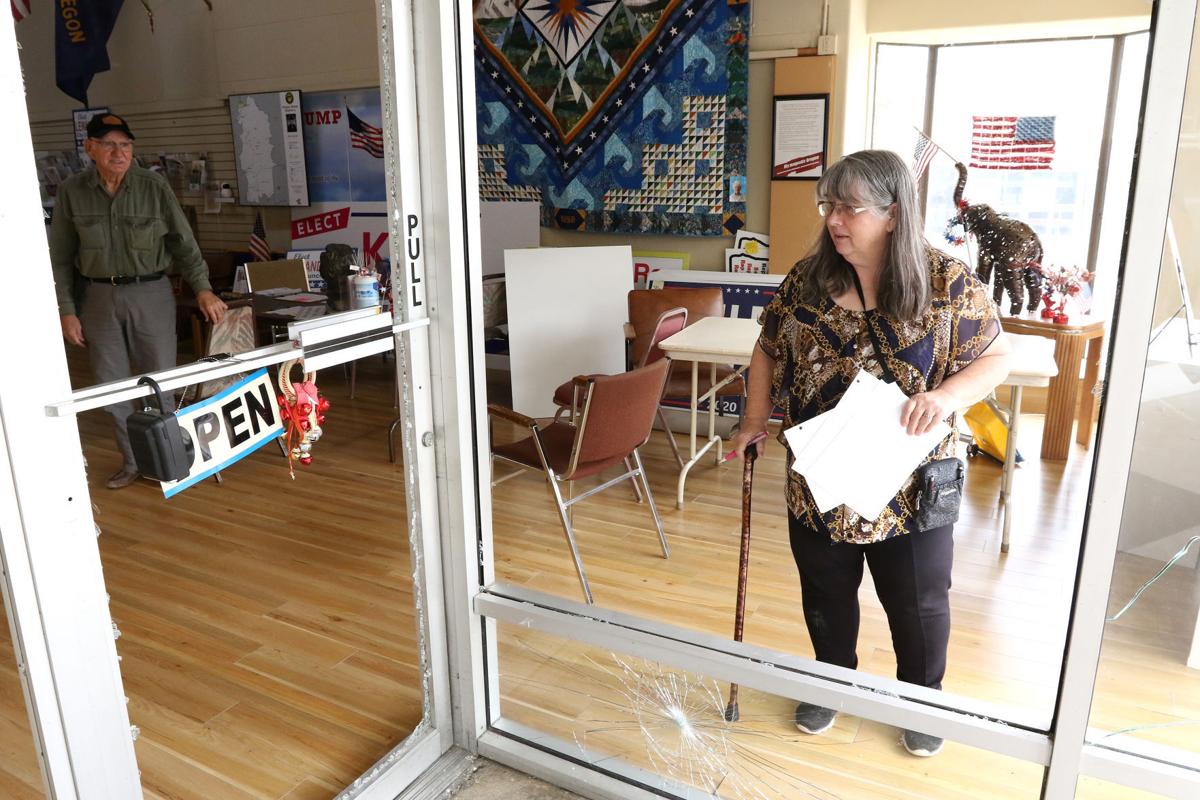 Volunteer Kathey Linn passes near glass panes that were completely destroyed by vandals at the front entrance of the Douglas County Republican Headquarters in downtown Roseburg on Wednesday. 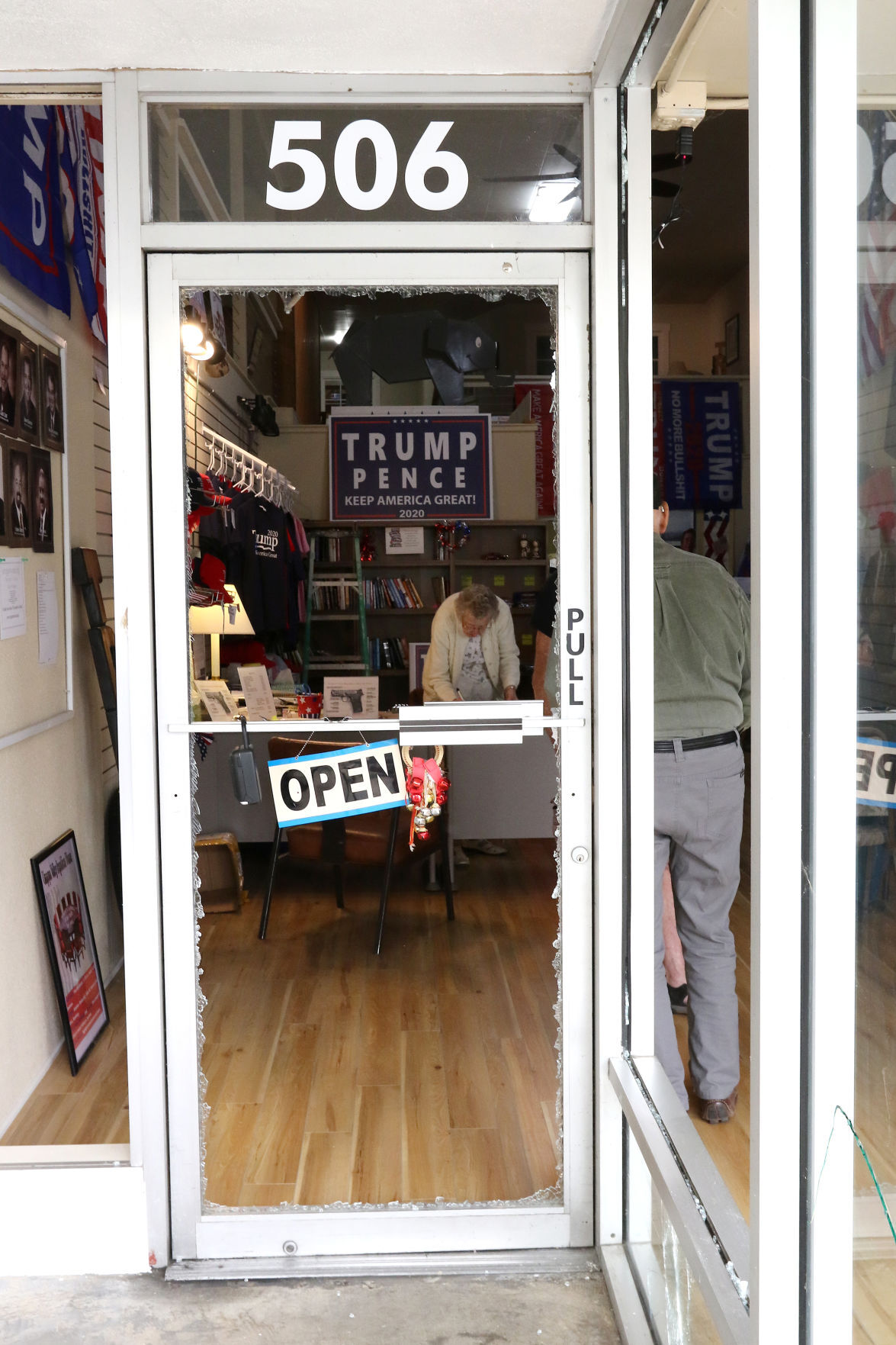 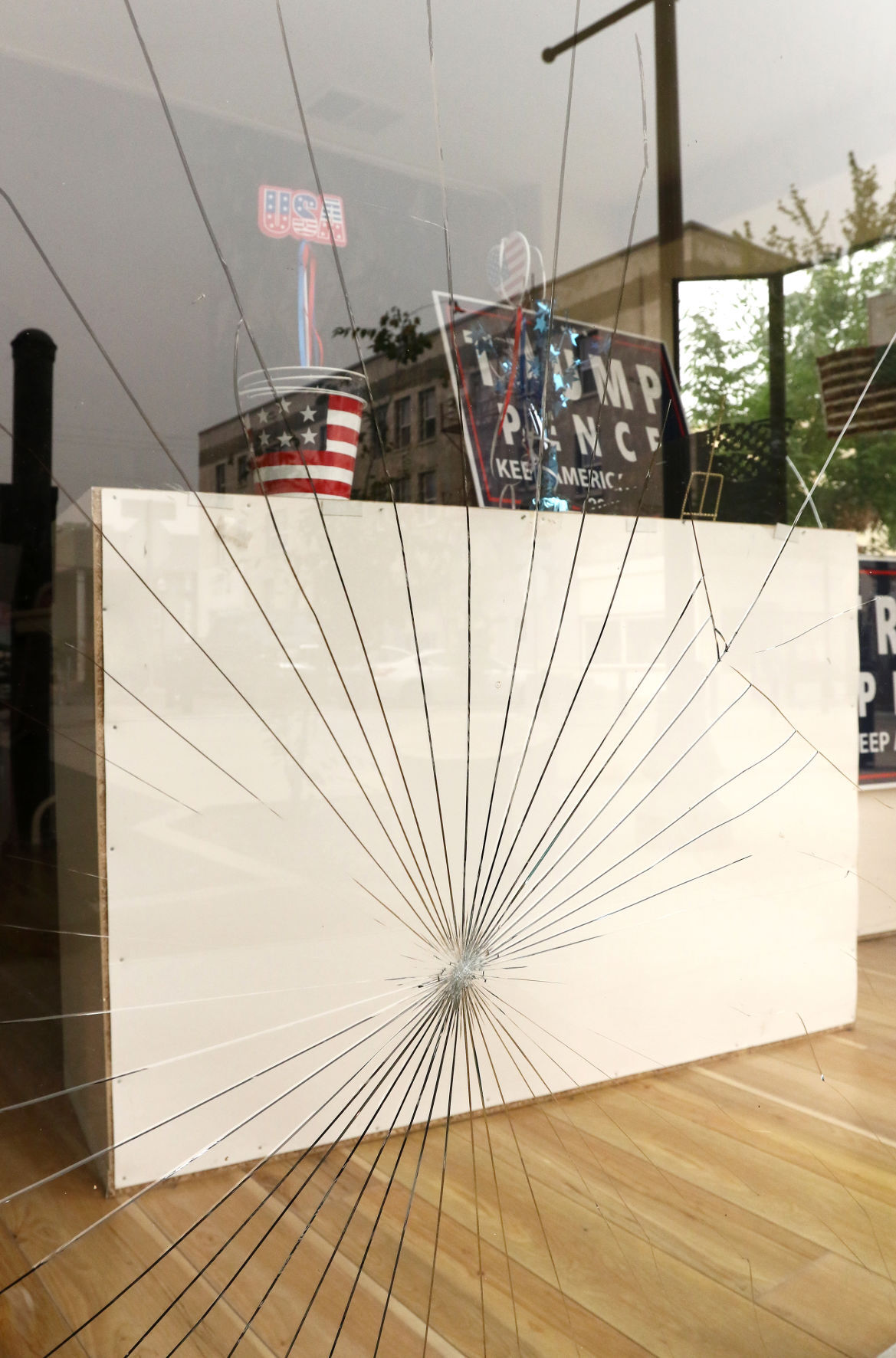 Volunteer Kathey Linn passes near glass panes that were completely destroyed by vandals at the front entrance of the Douglas County Republican Headquarters in downtown Roseburg on Wednesday.

Nine windows and a door were broken between 2 and 3 a.m., Douglas County Republican Party Chair Valynn Currie said Wednesday. The vandalism was similar to a vandalism incident at the building in May, and it was the fifth time the headquarters have been vandalized in recent months.

Currie estimated the cost to repair the damage at about $2,000.

She said whoever did it, they weren’t part of a legitimate protest.

“Where’s the civility, and how can you justify this type of action? I don’t think it can be justified,” Currie said.

The May incident also involved the spray-painted threatening message “Kill Trump.” Earlier incidents included window breakage, eggs being smashed against the building, as well as a message saying “Burn it down” painted on the side of the building.

Currie said she believes the cameras at the building will have captured images of the vandal or vandals who created Wednesday’s damage.

“We’re doing some work with the cameras right now and we’re going to get those chips to police and see if they can ID the person. Of course, they’ll probably have a black hood on and black mask and sunglasses,” she said.

Still, she believes the perpetrator, or perpetrators, will be caught.

Currie said the Republicans will fix the damage, but they won’t do it with insurance money. No one will cover their risk for glass breakage, she said.

Sheriff responds to murder-suicide in Dillard

It's interesting that the Republican headquarters has been vandalized once again, meanwhile the Democrat Headquarters over on Cass Street has not had any issues reported. That's interesting.

there are good and bad people in both parties i'm sure most people will agree to that statement. whoever broke the windows in the republican office may have just been people who started some of the fires in oregon. just haters who want to cause as much havic as they can because they are miserable human beings. has the democratic office been broken into? has any damage been done to their office? just asking

When someone lays blame on someone they claim they "aren't going to say," aren't they actually saying it?

Ima not gonna say you rite.

A security camera is cheap. At least the cops would have something to go on.

The DC Republican Party Chair’s comment “Here we go again. I'm not going to say antifa, I'm not going to say Black Lives Matter, I'm just going to say it's the Biden supporters, because obviously. We don't know who did it, but we're going to find out” is doing what is always prevalent in the GOP and that is ACCUSE! Watching news and seeing so called “patriots” who have been churned up into a frenzy by trump’s vindictive speeches its no wonder violence is starting to become out of control. The lies, defiance against our country’s laws, corruption, nepotism, and down right complete rotten behavior to gain control and smear the other party would lead me to think there is more to this then the Democrats.

Perfect example of Douglas County IQ and mentality right here. If someone does something you don't like or agree with, than that for sure means you must be the opposite political party of that person!

The concept that you can agree/disagree with both sides of something, and still not have to pick is like an advanced concept for most people here.

I'm not a fan of Trump, I defiantly don't consider myself a Republican, but I don't label myself as a Democrat either. I think some people have lost sleep over the fact that I don't choose a side. Both sides do things I like and don't like, but not one is a side I'd fully support in the end.

Oh, Sectorstar. Why do you seem to mention "Douglas County IQ and Mentality" periodically in you posts as if to denigrate the people of Douglas County. Or is it you are actually pointing the finger to people who have lived here all their lives or have at least moved here and left their "know-it-all" big city attitude where they came from. Why don't you try that for a while. Forget the trashy place you came from and love Douglas County like it is as a 'real' citizen.

And as I've said several times, if you don't like something, don't read it! :)

You must be a miserable person to be around if everything seems to make you butt hurt and loose sleep over comments from a news site. Just X out this site and go somewhere else. You'll feel so much better, trust me!

Totally agree but we must pick the lessor of the evils and it is so apparent that Biden is the man. Joe Biden is a man that has faced much of what most people have experience and done it with dignity and compassion. Trump is a skilled liar, a bully and is extremely vindictive. One might say trump has no soul. To not vote for Biden is giving a vote for an individual who is lacking empathy and integrity of any kind.

I hope they catch the criminals who did this.

This is awful. Such actions have no place in a democracy. It is also hypocritical of Currie to plea for civility, while at the same time assuring us that she knows that this was done by Biden supporters: "I'm just going to say it's the Biden supporters, because obviously." No, it is not obvious; what is obvious is that it was done by someone who hates Trump, or wishes to be identified as someone who hates Trump. I hope the perpetrators are caught and prosecuted, and be forced to pay restitution. I also hope it turns out to be a Trump supporter; but I am far too civil to claim that it is obvious that a Trump supporter did it.

I hope the police are successful in their investigations.

Oh, CitizenJoe. Why can't Currie say the damage was caused by Biden Supporters; you always seem to blame Trump in everything you post. Talk about being hypocritical. You take the cake.

Conversely bob your hero Donald Trump blames everyone else for all his screww ups. You have no problem with that. A previous President once said "The Buck Stops Here". Donald Trump says it "It's Not My Fault" and you stand up an clap!

Why? Because she does not know. Remember Ashley Todd? She claimed that supporters of Barack Obama carved a "B" into her face--but she had done it to herself. (She carved it backwards, you will recall, as she was using a mirror.) There are numerous examples of such false claims by Republicans. I doubt Currie is deliberately making a false claim; but she has no evidence yet regarding who is responsible. It is not civil to accuse without evidence; and she is making a plea for civility while so accusing. Your claim about "everything" I post is overbroad; where, for example, in this thread did I blame Trump? Nowhere. But thank you for the cake.