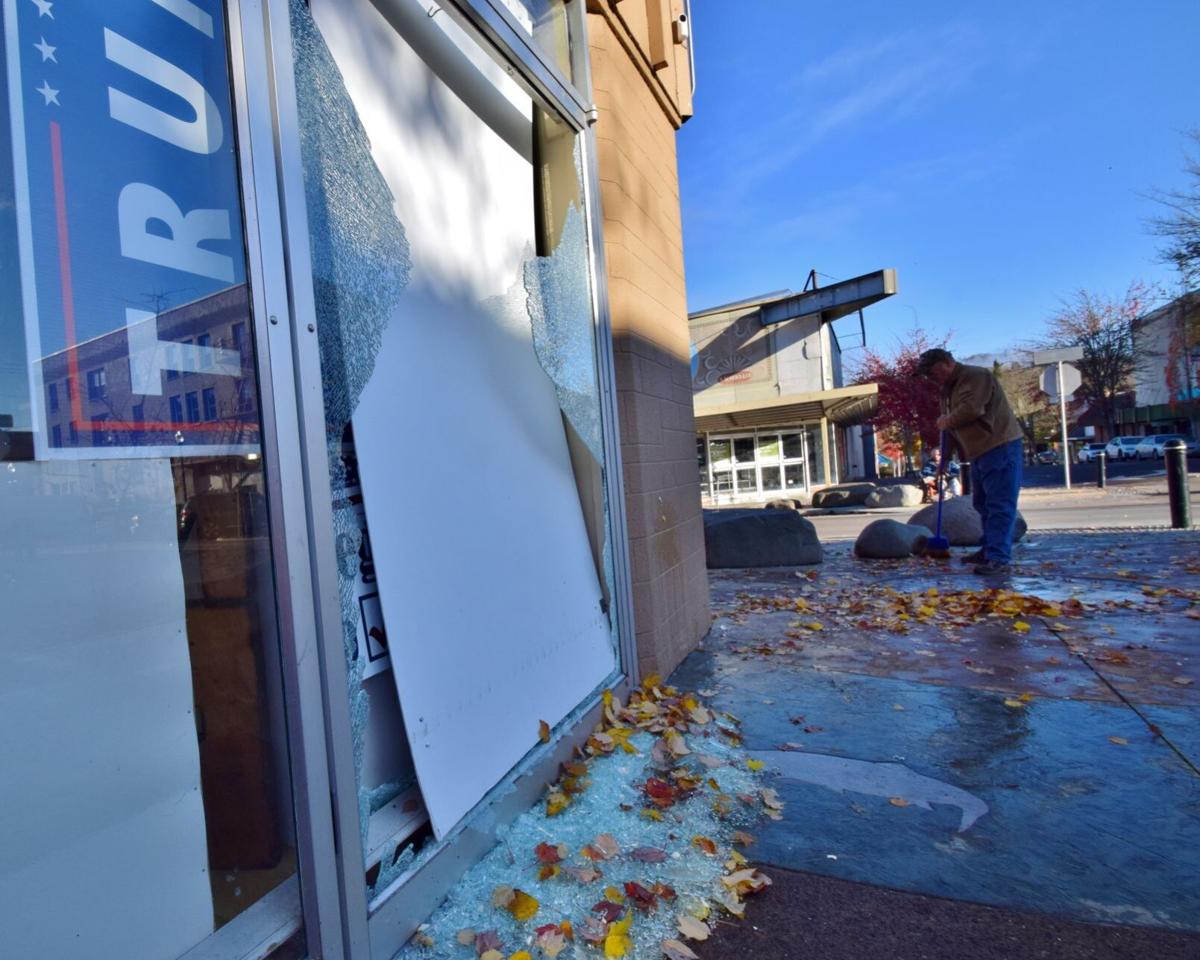 Rob Price, head of security for the Douglas County Republicans, sweeps up broken glass in the aftermath of overnight vandalism Friday morning at the political party’s headquarters in downtown Roseburg.

Graffiti on the Douglas County Republican headquarters building mocks the political signs of President Donald Trump and House of Representatives candidate Alek Skarlatos after the facility was vandalized in 2020. 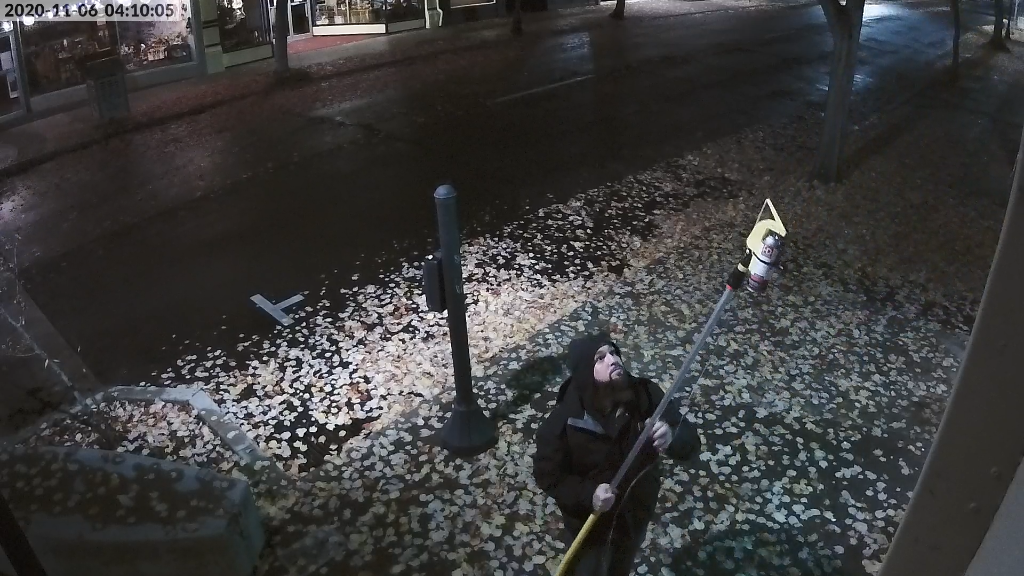 This photo was taken by Republican Party security cameras and is alleged to show the Friday morning vandalism as it took place. 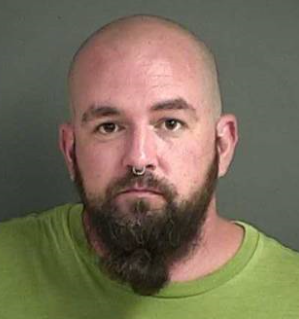 UPDATE: Roseburg Police Department detectives have filed additional charges against Sean Michael O'Grady in relation to the vandalism of the city's Republican Party Headquarters in downtown Roseburg. Today, O'Grady was charged with two more counts of first-degree criminal mischief (a Class C felony) and one count of second-degree criminal mischief. RPD spokesman Jeff Eichenbusch said the new charges are all related to the headquarters building. More charges are still pending.

A Roseburg man was arrested Tuesday in connection to the most recent attack on the Republican Party Headquarters in downtown Roseburg.

The party’s headquarters, located at 506 SE Jackson Street, has been vandalized seven times since the start of 2020.

Sean Michael O’Grady, 38, was contacted by Roseburg Police Department detectives regarding the most recent attack on the building, which was reported on Nov. 6.

Security cameras installed by the party produced very clear images of the suspect spray painting the building in the early morning hours of Nov. 6. Also in that attack, a large window was broken out.

In addition to the broken glass, “KKK” was painted over signs on the side of the building, as well as messages with arrows pointing to campaign signs for President Donald Trump and Alek Skarlatos, who recently lost his bid to unseat Peter DeFazio (D-Springfield) in their campaign for U.S. House District 4.

The message leading to the Trump sign read “loser” while the message aimed at the Skarlatos sign read “sucker.” There were also multiple “haha” messages left behind on the bottom of the building.

According to the Oregon Secretary of State, O’Grady is a registered Republican.

He was charged with first-degree criminal mischief, a Class C felony in Oregon.

According to police, the investigation into the previous attacks continues, and additional charges may be pending.

For the seventh time in 2020 and third time in the past three months, a vandal, or vandals, …

Roseburg man back in jail on stalking charges

California woman back in jail on manslaughter charge

Roseburg man back in jail on stalking charges

Guaranteed there will be a side-stepping spin on the accusation thrown towards the Dems with regards to the vandalism. The perpetrator was a Republican 👍 go figure that! Now the GOP will come up with some new BS to try and lay blame. Just look at the whining big baby in the White House and how he loves to say “they did it”. What a disgusting group of people who will cause the downfall of America.

melrosereader: exactly. It would not be the first time. Recall, for example, Ashley Todd, who carved a "B" into her face and tried to blame Obama supporters. (She carved the "B" backwards, because she was using a mirror at the time. So she was about as bright as was the recent apparent perp.)

Watching the images of all the lowlifes flash across the N-R website offers a gallows humor type of relief from Covid news and Trump's shenanigans.

So there is that.

Like others, I'm also laughing right now. The first time it was reported the chair person decided it "must be a Joe Biden supporter!"

I saw his picture on the local mugshot site last night and wondered what it was for, now this answers it. Hes no stranger to me as he used to work at Costco with me several years ago till he got fired for stealing merchandise. If you look him up, this is far from his first run in with the law.

I'm glad they caught him. Period. Vandalism is vandalism, I don't care what your political party is.

Wait, so he's a registered Republican? Not Antifa? Jeez, not even a Democrat. Maybe the accusations should have waited for the facts. But that's not the Republican way. And they never see the irony.

Now, a chair of the local Republican party will retract her assertion that it was obviously done by a Democrat.

How about the other commenters on the earlier articles about this, who similarly asserted that it was obviously a Democrat at fault.

It doesn't matter which party he is registered with. There are plenty of Democrats that support Trump and Republicans who don't. He submitted his ballot on Oct. 22nd. It may be just a hunch but I have a feeling he didn't vote for Trump... [whistling]

"It doesn't matter which party he is registered with."--yeah, this from the guy who remarked last month "How many times has the Democrat HQ been vandalized this year?"

It DOES matter because the Chairperson of the local Republican party blamed it on Democrats.

Mike you are spot on!

I'm glad they caught the guy and relieved that he's a registered Republican.