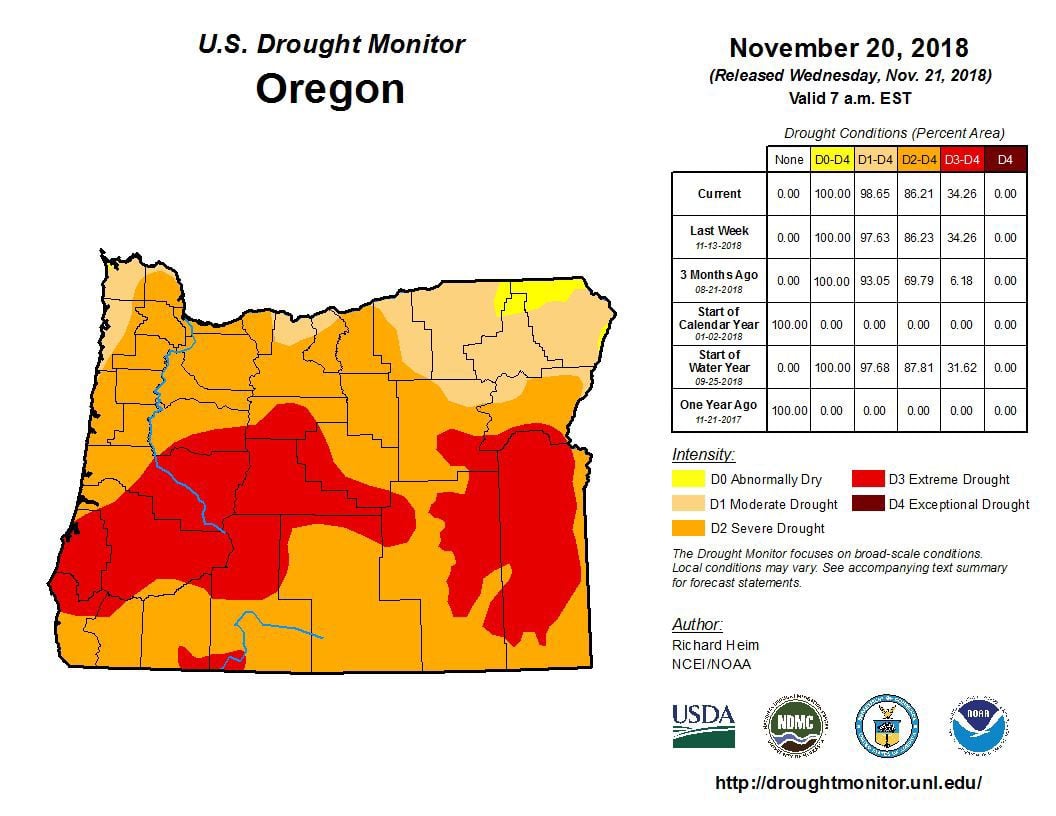 A drought map of Oregon released Wednesday shows much of Douglas County in extreme drought conditions. 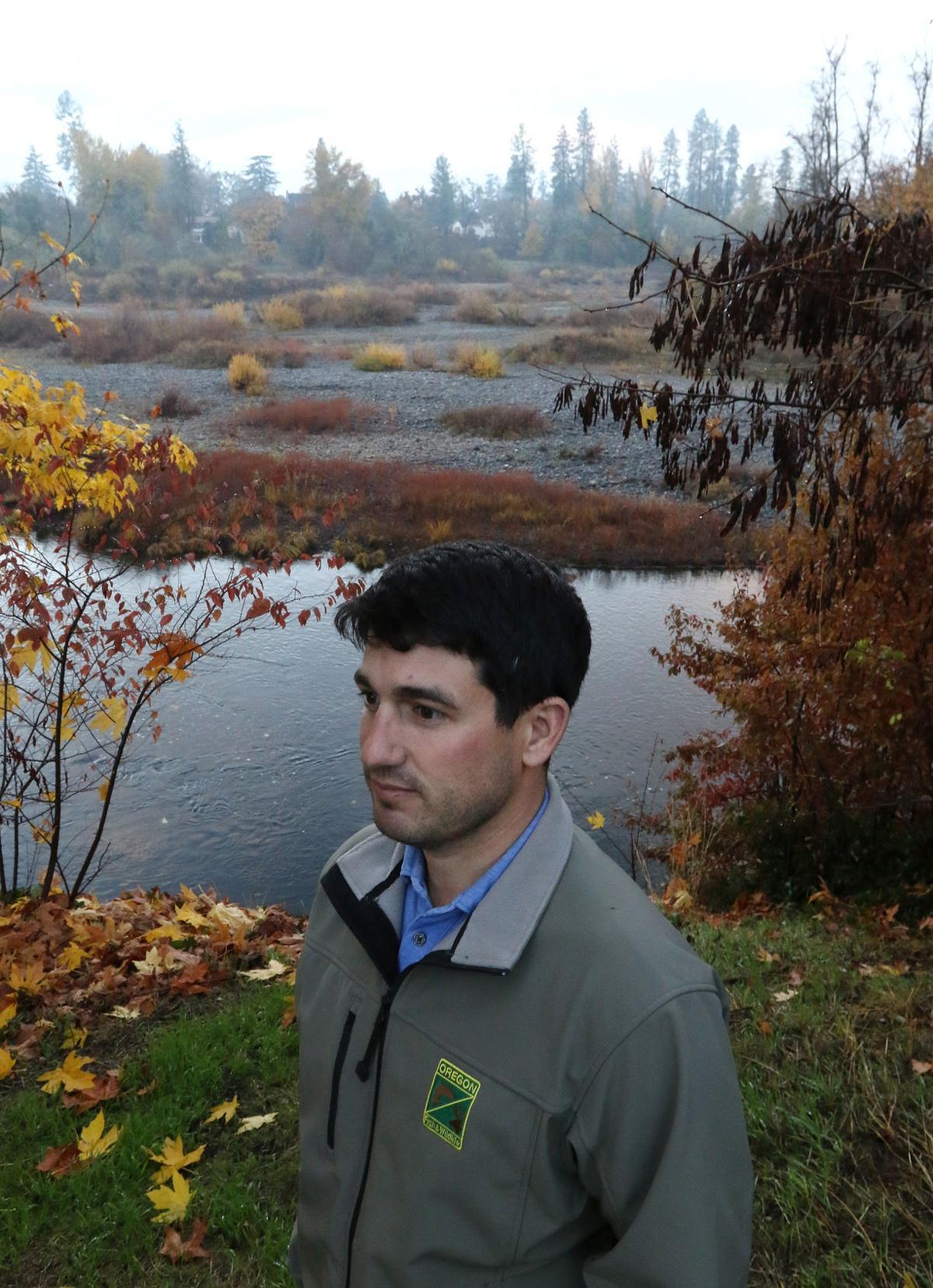 Oregon Department of Fish and Wildlife biologist Evan Leonetti stands near the South Umpqua River in Roseburg on Wednesday. Drought conditions have led to low stream flows in local waterways including the Umpqua River.

A drought map of Oregon released Wednesday shows much of Douglas County in extreme drought conditions.

Oregon Department of Fish and Wildlife biologist Evan Leonetti stands near the South Umpqua River in Roseburg on Wednesday. Drought conditions have led to low stream flows in local waterways including the Umpqua River.

The skies opened up this week, but it wasn’t enough to get Douglas County out of a drought.

As of Friday morning, just under 1.5 inches of rain had fallen in Roseburg in the past few days. That level of rainfall is still more than 3 inches below normal for November, according to the National Weather Service in Medford.

The county declared a drought emergency in June, a declaration that has yet to be lifted.

More than 34 percent of the state is currently in an extreme drought, which includes most of Douglas County, according to the U.S. Drought Monitor.

Compare that to the same time last year, when none of the state was in a drought.

The latest water conditions report released by the Oregon Water Resources Department on Nov. 19 said unseasonably dry conditions have continued to prevail across the state.

“From the crest of the Cascades westward to the coast, precipitation has been 2 to 8 inches below normal,” the report reads.

Marc Spilde, a NWS meteorologist, said everyone is counting on rain this winter, because two years of drought doesn’t bode well for the following summer, especially for fire season.

Spilde said, “If we have another winter here where it’s dry it’s going to be problematic going into the summer.

“Up in our area we had one day of lightning this summer and you saw what it did. One day caused all that. We’re prone to much more lightning in Southwest Oregon than that during the summer months.”

In the first two weeks of November, there was less than one-tenth of an inch of rainfall, according to the weather service.

Spilde said normally there would be 2.5 inches of rain in the first two weeks of the month.

In October there was a little more than an inch of rain. Typically there would be more than two and a half inches of rain, Spilde said.

The meteorologist said it’s going to take multiple heavy rainstorms to get the region out of the deficits that have been built up over the last year. But, he said, it could happen.

“We could be in a drought here this month and by the end of this month… we turn the faucets on over the Pacific and we’re no longer in a drought and it’s wet and the reservoirs are full and everybody’s happy,” he said.

“Climatology is a collection of the extremes,” Spilde said. “Most times you’re having one end or the other. And so you take a rubber band, you stretch it and what’s it going to do when you let it go? It’s going to snap the other direction.”

A study recently published by Oregon State University researchers found that high-density carbon forests in the Pacific Northwest and Western Cascades will be least vulnerable to drought or fire.

Douglas County watermaster Susan Douthit has a magic 8 ball on her desk, but she can’t tell you when it’s going to rain.

“My crystal ball is not great but it is looking warm and dry,” Douthit said.

Drought-striken land can cause a warm and dry weather pattern to perpetuate, leading to a situation where drought prolongs itself.

But, like Spilde, Douthit said weather can quickly change and the area could get a bunch of snow in February and March and be good to go.

Right now stream flows continue to be low in the county, which can cause a severe problem for the fisheries, Douthit said.

“It’d be nice to have a whole lot of the water in the streams so the fish could get up,” she said.

Stream flows for October were 57 percent of normal, according to the water report. Regionally that number is even lower, with recent data indicating that flows are 40 percent of normal in the Umpqua Basin.

Evan Leonetti, a biologist with the Oregon Department of Fish and Wildlife in Roseburg, said lower flows and warmer water temperatures have been impacting cold-water fish, making them more susceptible to predation.

He said the drought is causing a delay in coho spawning and the streams the salmon typically spawn in have been too low for them to swim up.

But because coho can spawn up until the spring, the biologist said they won’t know the impacts anytime soon.

“We really won’t have a good idea of how impactful it has been to fall chinook and coho until probably a couple months from now until we get all the data,” Leonetti said.

Hopefully, Leonetti said, “the rain does what it’s supposed to do” and fish are able to spawn further up in area streams.

Leonetti said ODFW works with the county to release water for fish out of the Galesville Reservoir.

Because of the low amount of rainfall last winter, the dam wasn’t able to store enough water for summer, Leonetti said.

“It’s pretty darn low,” he said of the reservoir.

The Galesville Reservoir is currently 29 percent of full, the county’s office said.

County spokeswoman Tamara Osborne said that’s still above the lowest levels the reservoir has seen, which was around 13 percent in 2001.

The National Oceanic and Atmospheric Administration predicts that Oregon has equal chances of having above or below average rainfall for the next three months. However, the same outlook predicts above normal temperatures over the winter months.

Douthit said she and her colleagues are watching the forecasting very closely.

“There’s a lot of things a watermaster can do but they can’t make it rain,” Douthit said.