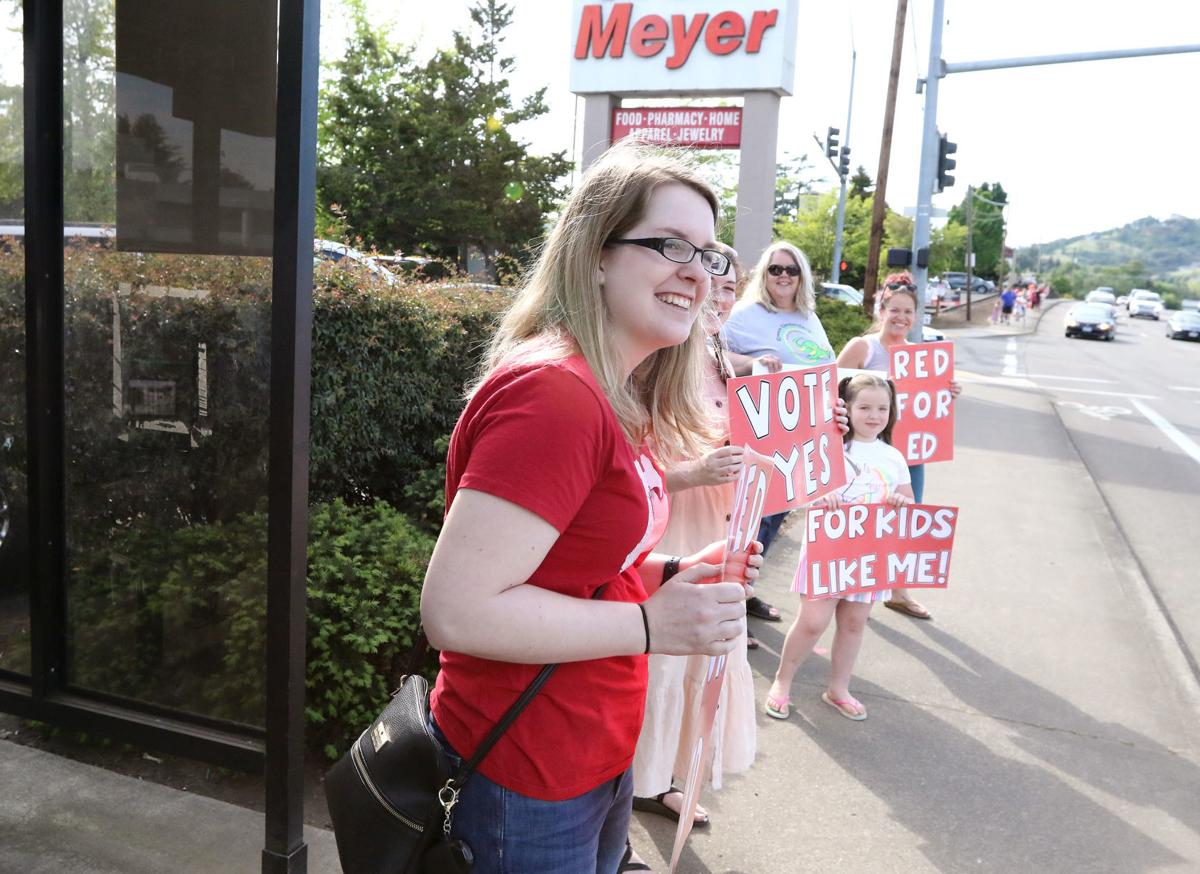 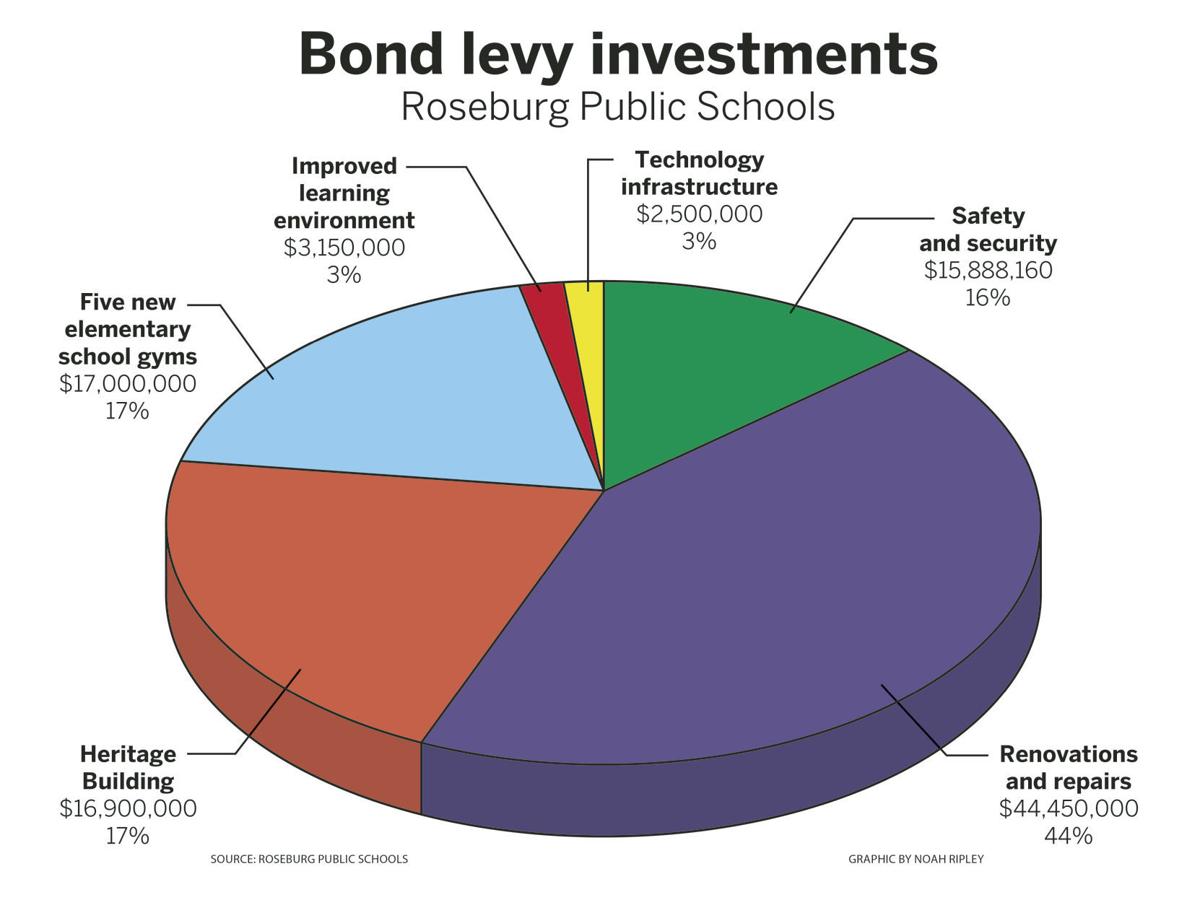 As ballots have been sent to voters throughout Douglas County, those living within the boundaries of the Roseburg school district are asked to vote on a $94 million bond levy that is said to improve safety, security, vocational education and make improvements districtwide.

According to information from the school district, approximately 44% of funding would be used for renovations and repairs, 17% to build five new gymnasiums at elementary schools, 17% for replacing the Heritage building, 16% on safety and security, 3% on technology infrastructure and an additional 3% on improving learning environments.

“In addition to deferred maintenance it’s really about the safety and security of our kiddos,” Roseburg Public Schools Chief Operations Officer Cheryl Northam said. “That came through in polling, it came through in discussions with our school board. We’re in a different world and that’s got to be one of our major concerns.”

Alex Palm is president of the political action committee in favor of the bond, Vote YES for Roseburg Schools, father of two children in Roseburg schools and a fourth-generation Roseburg High School graduate.

Palm is the principal and civil engineer for i.e. Engineering and he said that in his 15 years of recruiting people, potential employees look for a good community to raise a family.

“When I take them to look at schools, it’s a deal-breaker every time,” Palm said. He said there hasn’t been a urologist in Roseburg for three years and “if having schools that are up-to-date on infrastructure can recruit even one new professional, the cost for that person or for those trips to Medford or Eugene, it would pay for itself.”

Palm said the bond levy is replacing a school bond levy that is set to expire.

“What folks would see is a decrease for 18 months and then have it go into effect,” Palm said. Changing the date to November 2021 was done directly to address to immediate concerns of the economic impact of COVID-19 on Roseburg residents, while still allowing the district to hold on to the state’s $5.89 million grant.

However, not all Roseburg residents agree that now is a good time to ask for more money for schools.

“If you do the math, you will find that your school tax amount will double if Measure 10-173 passes,” Shirley Neal wrote. “We care about the kids. But paying for basic family necessities has a high priority too. Renters can expect to pay more rent to offset the higher property tax the landlords will have to pay.”

Palm said promoting the school bond among constituents has taken on a different form due to the coronavirus and the bans on social gatherings that came along with it.

“Originally we had public speaking events scheduled,” Palm said. “We were hoping to take advantage of going to organizations, such as rotary club, and public events. All of that has been canceled and we’re largely restricted to social media. We’re very active on Facebook and updating the website, making phone calls to voters to remind them to vote and give them reasons to vote yes.”

The PAC has also adjusted its messages to say the added construction projects would be “a $100 million stimulus plan in central Douglas County,” Palm said.

On Thursday afternoon, those in favor of the bond stood along Northwest Garden Valley Boulevard with signs to inform people of the bond measure.

Districtwide renovations include improvements to the heating and air conditioning systems at schools, replacing roofs, paint, siding, plumbing and other repairs.

Facilities in the Roseburg school district are all between 40 and 100 years old and in need of repairs, according to Cordon.

“We tried to take a more holistic view of how does every student benefit and how does every neighborhood benefit,” Cordon said. “And how is it beneficial as a community.”

The school board made decisions on which projects to include in the bond based on the long-term facilities plan and community input during listening sessions.

The new gymnasiums would be at Eastwood, Green, Fir Grove, Fullerton IV and Melrose elementary schools.

Cordon said those new gymnasiums would serve as community emergency shelters and that he has been in conversations with local emergency services providers.

There are already several gymnasiums within the Roseburg school district that are separate from the school building, such as Jo Lane Middle School and Winchester Elementary Schools. No Roseburg school buildings were used as community emergency shelters during the winter storm of 2019 or the coronavirus pandemic.

Replacing the Heritage building, which was the original Roseburg High School and known as the old main to many, is expected to cost just under $17 million.

“The board felt strongly it was best to rebuild that building,” Cordon said. “Because the return on a significant remodel, and the limitations around the remodel at that building, didn’t outweigh the cost of what a rebuild would do.”

“We don’t have any secure schools right now,” Palm said. “We have open campuses and we need proper security for our facilities.”

The remaining 6% that will be split between technology infrastructure and improving learning environments, including improved access to vocational education, site improvements, furnishing and equipment.

If the bond measure is approved by voters, the district will receive $5.89 million in a state matching grant.

Ballots can be returned by mail but must be received by the Douglas County Clerk’s office by 8 p.m. election day, May 19. Postage is free for those mailing in their ballots.

It would seem to me that the School District should re-think this bond a little but in light of the economic impact throughout the district and county from the Covid-19 virus shutdown. While some families will be able to deal with a significant property tax increase, there are still quite a few who would be unduly burdened by this big of an increase in taxes.