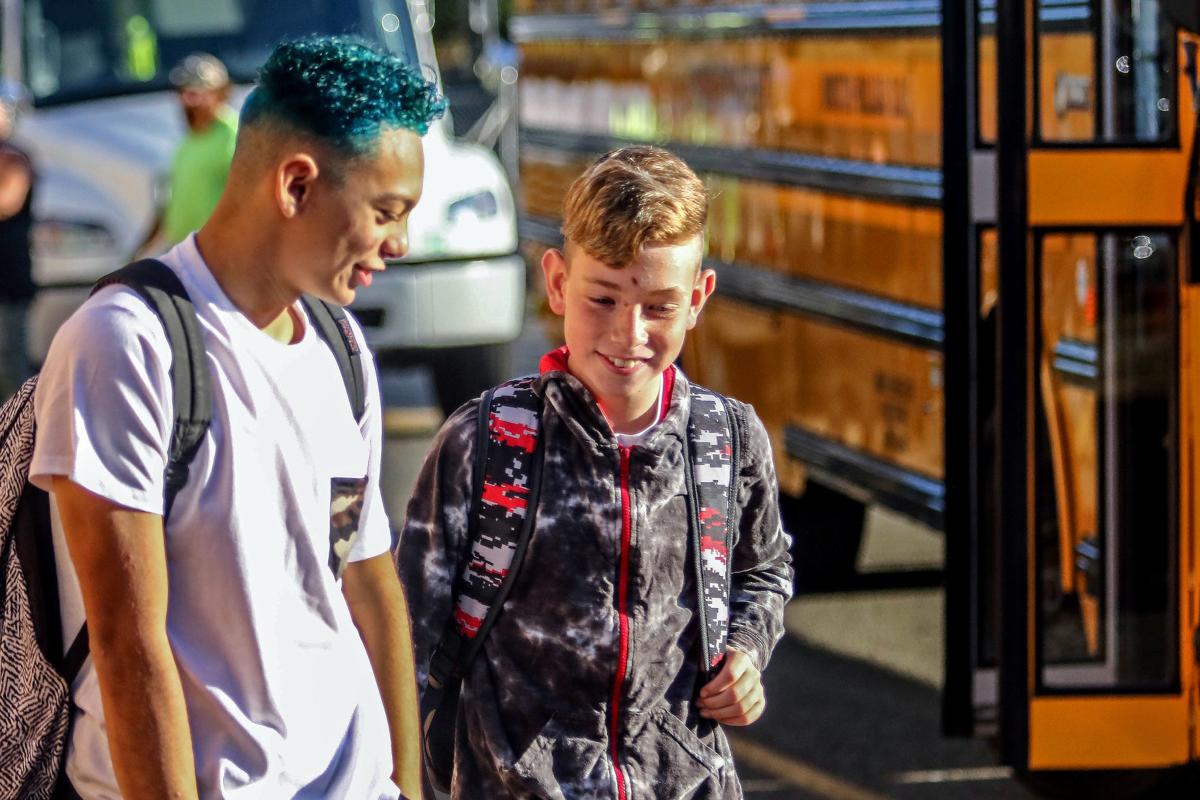 Isaac Velasquez, left, and Devon Taylor, both sixth graders at McGovern Elementary School in Winston, speak after they leave the bus on the first day of school Monday. 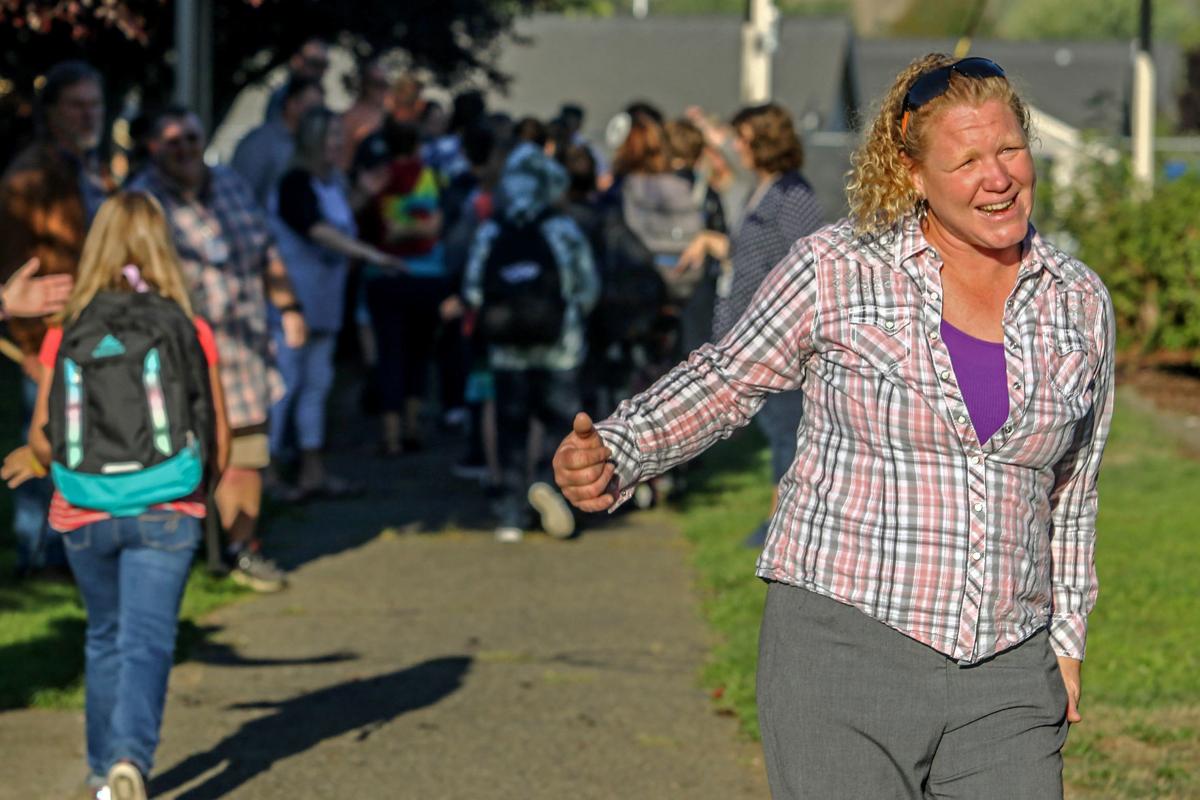 Lindi Tabor, a special education teacher at McGovern Elementary School in Winston, greets students as they arrive on the first day of school Monday. 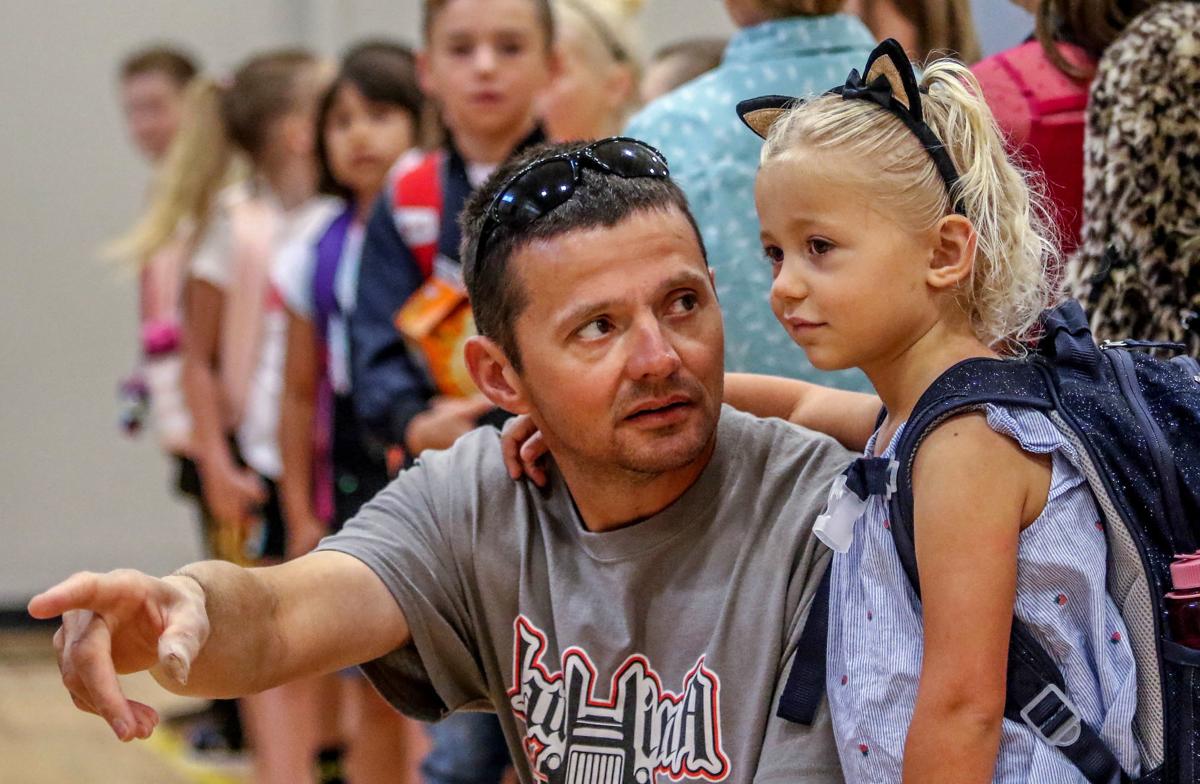 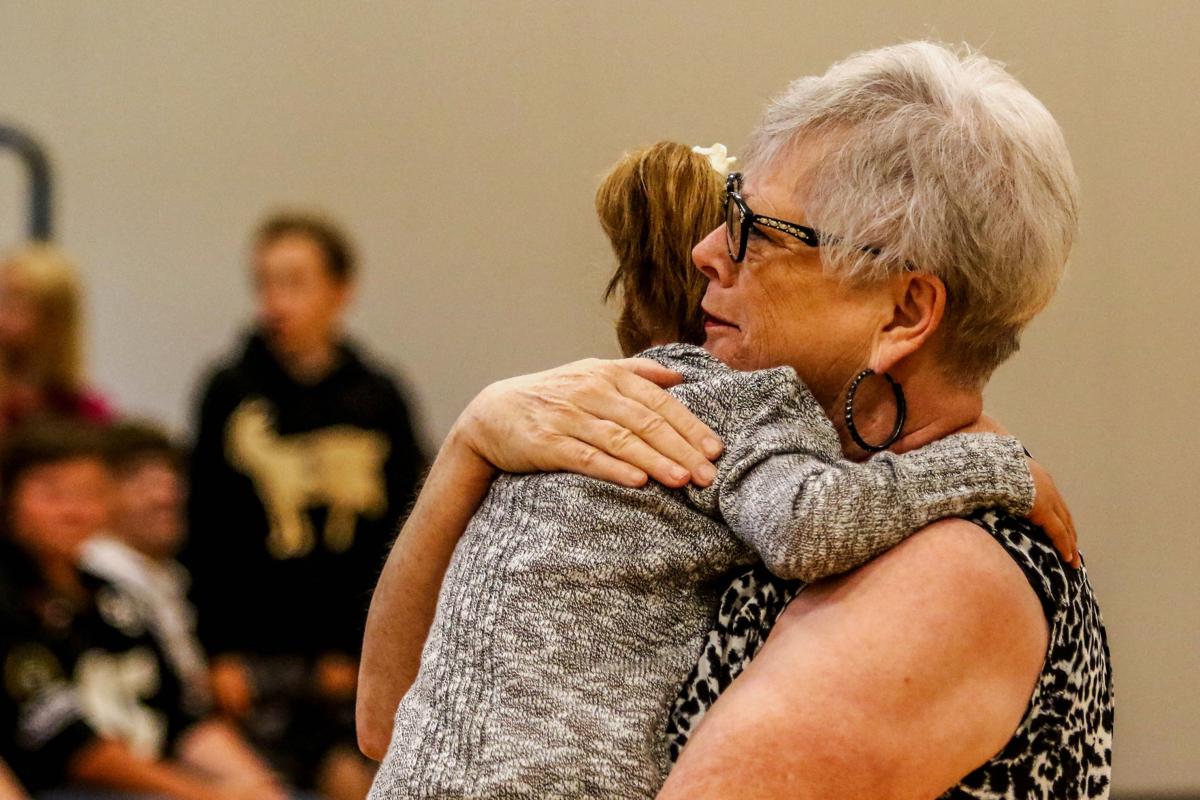 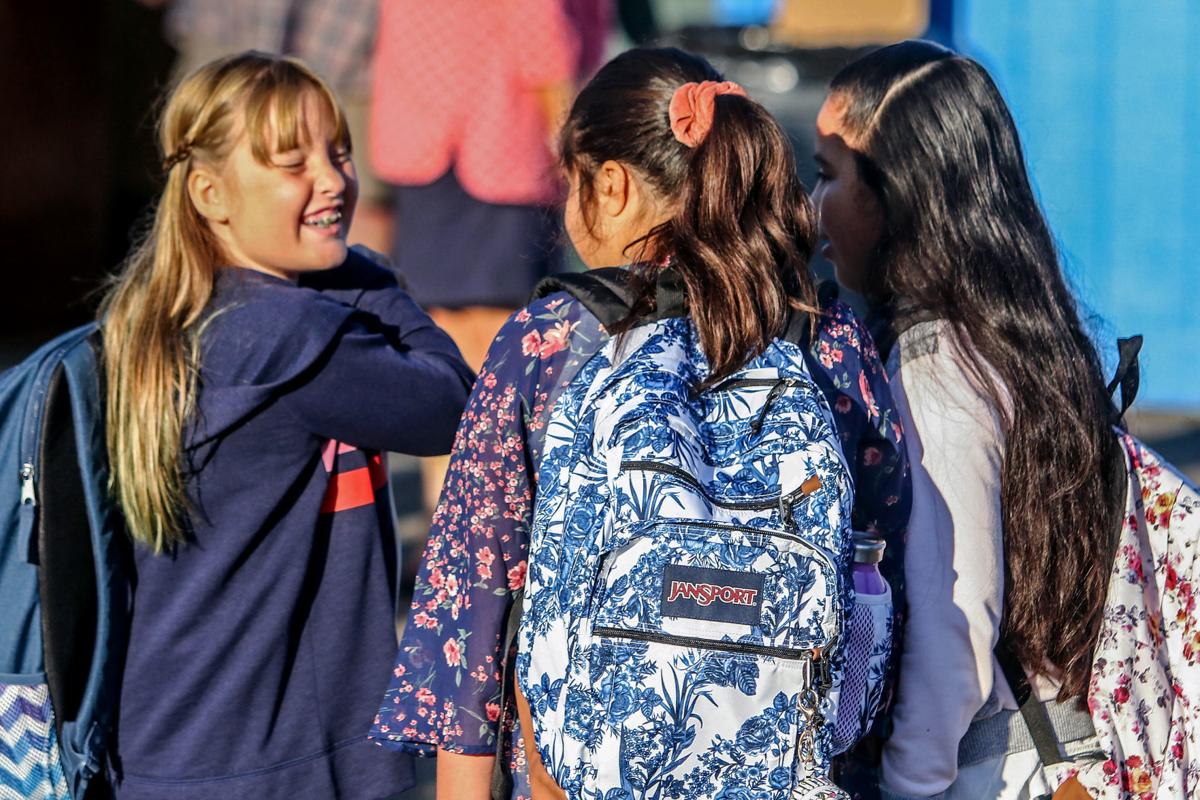 Kimberly Lyman, Jessica Delacruz and Kenna Martinez share a moment on the first day of school at McGovern Elementary School on Monday. 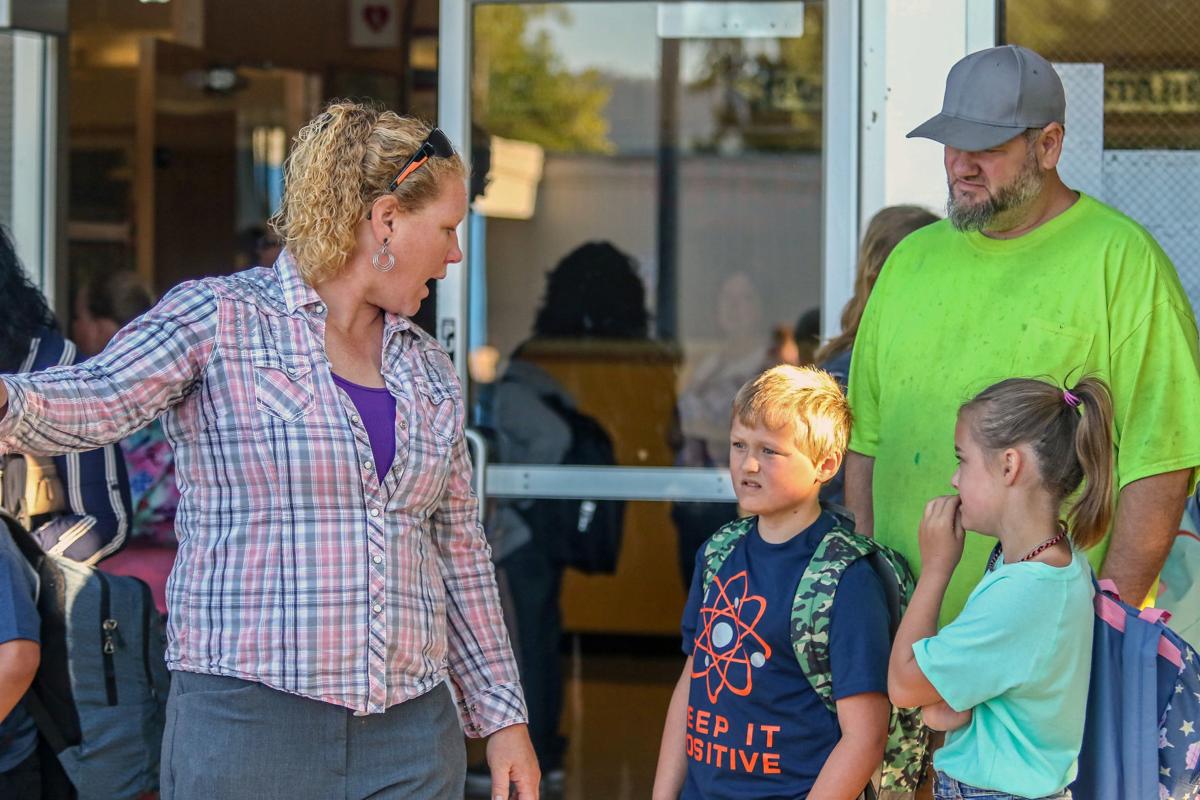 Isaac Velasquez, left, and Devon Taylor, both sixth graders at McGovern Elementary School in Winston, speak after they leave the bus on the first day of school Monday.

Lindi Tabor, a special education teacher at McGovern Elementary School in Winston, greets students as they arrive on the first day of school Monday.

Kimberly Lyman, Jessica Delacruz and Kenna Martinez share a moment on the first day of school at McGovern Elementary School on Monday.

She gave hugs and high fives to students and helped others find out who their teacher would be this year and showed students how to get to their new classrooms.

Tabor said her excitement wasn’t just because it was the first day of school for several Douglas County schools.

“I’m kind of that way every morning,” she said, as fourth-graders lined up to get into the cafeteria for breakfast. “School is a good portion of their lives. I want to make sure they’re set up for success.”

Aiden Birdsell, a 10-year-old fourth grader, was excited to start at a new school. He was especially looking forward to seeing his friends and studying math and physical education.

McGovern Elementary School is a fourth- through sixth-grade school.

Jessica Delacruz, Kenna Martinez and Kimberly Lyman were excited to see each other again after summer break.

The trio of 9-year-old fourth graders giggled and hugged as they talked about what they were expecting for the upcoming school year.

“I’m excited for field trips and seeing all my friends,” Kimberly said. Jessica added that she was hoping to make new friends and learn new things.

Fourth grader Konnor MacCall said he was nervous to start at a new school with a new teacher.

While Konnor rode the bus on his first day back to school, there was an influx in parents who took time to make the first day back special. Many even lined their students up in front of the blue wall with the school’s name or the welcome back sign for an obligatory first day of school photo.

Kaylee Sheppard, an 11-year-old sixth grader, was one of the students who posed for a photo. While she was nervous to start school and wished summer lasted a little longer, her mother was ready for school to start.

“We want to make sure the parents know we care too,” Tabor said.

Parents got a special goodbye from students at Lookingglass Elementary. After an opening ceremony in the gym, which included the Pledge of Allegiance, students faced their parents and waved them goodbye as they followed their teacher to their new classrooms.

Some of the kindergarteners were a little hesitant to start school, and one broke down in tears and ran to Principal Oriole Inkster for a hug.

Neveah Weaver, however, wasn’t nervous at all. She was just excited. Mostly because it meant she’ll get to play on the playground every day.

Glide, Elkton and Days Creek students are returning to school this week as well.

Heating up in the Umpqua Valley, but not for long
One man dead in crash near Toketee Falls