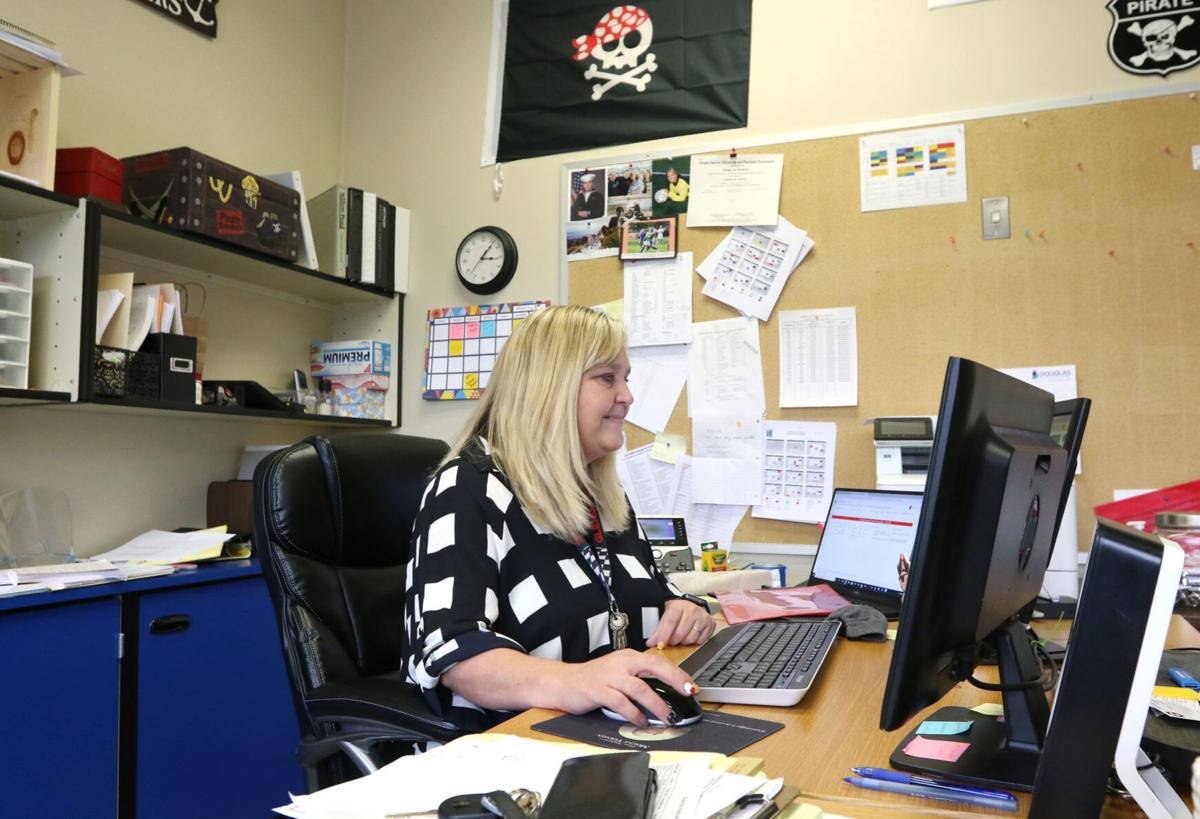 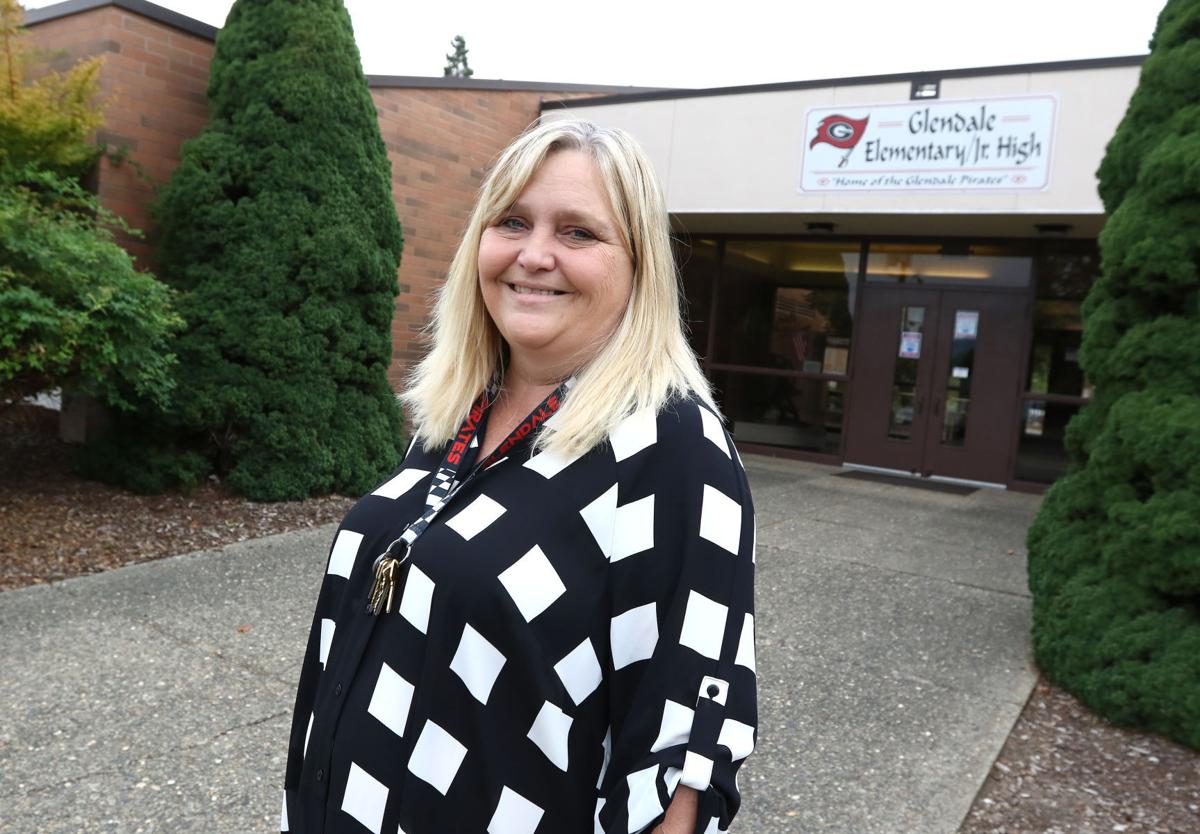 Bridget McMillen is in her first year as principal at Glendale Elementary School.

Bridget McMillen is in her first year as principal at Glendale Elementary School.

GLENDALE — It’s been a dream of Bridget McMillen’s to be a school administrator in a small community for a long time, so when she saw a job posting for the Glendale Elementary School principal, she didn’t hesitate.

“This opportunity came up over the summer and it seemed like the right fit,” McMillen said. “I like the area and the community. It’s been a little over a month and the families and staff are amazing.”

But as McMillen got her dream job, she’s also stepping into the new career at a strange time.

Coronavirus shut down schools at the end of March and McMillen knew she had to keep that in mind, but then wildfires came and added another layer of complications.

McMillen moved to Glendale from Medford, but her husband’s job is still in Jackson County. Last Tuesday, she got a call at 11 p.m. that her octogenarian father had to be evacuated due to fires.

“It’s a learning curve for everybody, but for a new principal, they have to lead in a way that is not the norm and it’s extremely difficult,” Superintendent David Hanson said. “She’s stepped up.”

Hanson said when McMillen was hired, the first thing she did was hold an unofficial staff meeting, so that people could share ideas and get to know her.

McMillen has lived in Oregon, specifically Southern Oregon, most of her life. Although she did spend a few years in North Pole, Alaska, about 30 miles south of Fairbanks, when she was a teen.

“I’ve mostly lived in smaller communities and I think that is probably the No. 1 thing that has been the most difficult,” McMillen said. “Schools are built around community. They help support the community in so many ways, through activities. For a lot of families, we are the care providers while they work to feed their families and pay their mortgages. The struggle of not having kids here has been super tough.”

McMillen has been a teacher for 29 years. She’s worked in general education classrooms, 15 years in special education and 11 years as a Title I specialist for intervention services.

She takes over the position from Daniel Endicott, who left Glendale after one year to take over the principal position at Sunnyslope Elementary School in the Roseburg school district.

“I am loving what I am doing,” McMillen said. “It is super hard and I have several colleagues in districts throughout Southern Oregon that I’ve been calling. Recognizing what they’re doing as admins, I cannot express how many hours most administrators worked continuously throughout the summer months to try and get ahead of this process. They’re all feeling like brand new administrators. Nobody has ever faced this.”

McMillen said she has been spending time with families one-on-one to set up technology and get to know them, while maintaining social distancing and other COVID-19 guidelines.

“We’re reaching out as much as possible through Facebook and letters and traditional ways, but also on the phone a lot,” McMillen said. “What I can tell you is that the community has been incredibly supportive of the new form of distance learning. Frustrated yes, but they are really working as a team member with us to provide for the kids.”

Glendale administrators are meeting Monday to discuss reopening to in-person learning. While the county meets state standards for reopening, Hanson said they decided to wait and see the impact of Labor Day on the health metrics.

McMillen also said she wanted to make sure there was stability for parents and students.

As the new principal of the elementary school, McMillen has two goals: get back into schools and start meeting the reading and math standards.

In the 2018-19 school year, 11% of Glendale Elementary School students met the state math standards and 28% met the language arts standards, compared to 41% and 52% statewide. The school report cards are usually released in October of the following year. Report cards for the 2019-20 school year are expected on Oct. 15 but will be adapted due to COVID-19 and subsequent school closures and distance learning.

“Elementary is the cornerstone of students being successful. We are set up to work hard specifically math skills in our area,” McMillen said. “In the immediate, I want to really focus in on access, parent supports and focus in on really developing those inter relationships that will help build instructional fortitude.”

McMillen said she’s been at the school until the evening hours to make sure the families and staff are getting what they need.

“It takes a lot to raise this village this year,” McMillen said. “I’m having a blast, even though it’s stressful. This community ... we’ll get through this.”

Welcome to distance learning: Tips from a math teacher

Roseburg students express a desire to go back to in-person learning, while explaining how they fare in distance learning

Supplies handed out to child care providers in Douglas County

Welcome to distance learning: Tips from a math teacher

Roseburg students express a desire to go back to in-person learning, while explaining how they fare in distance learning