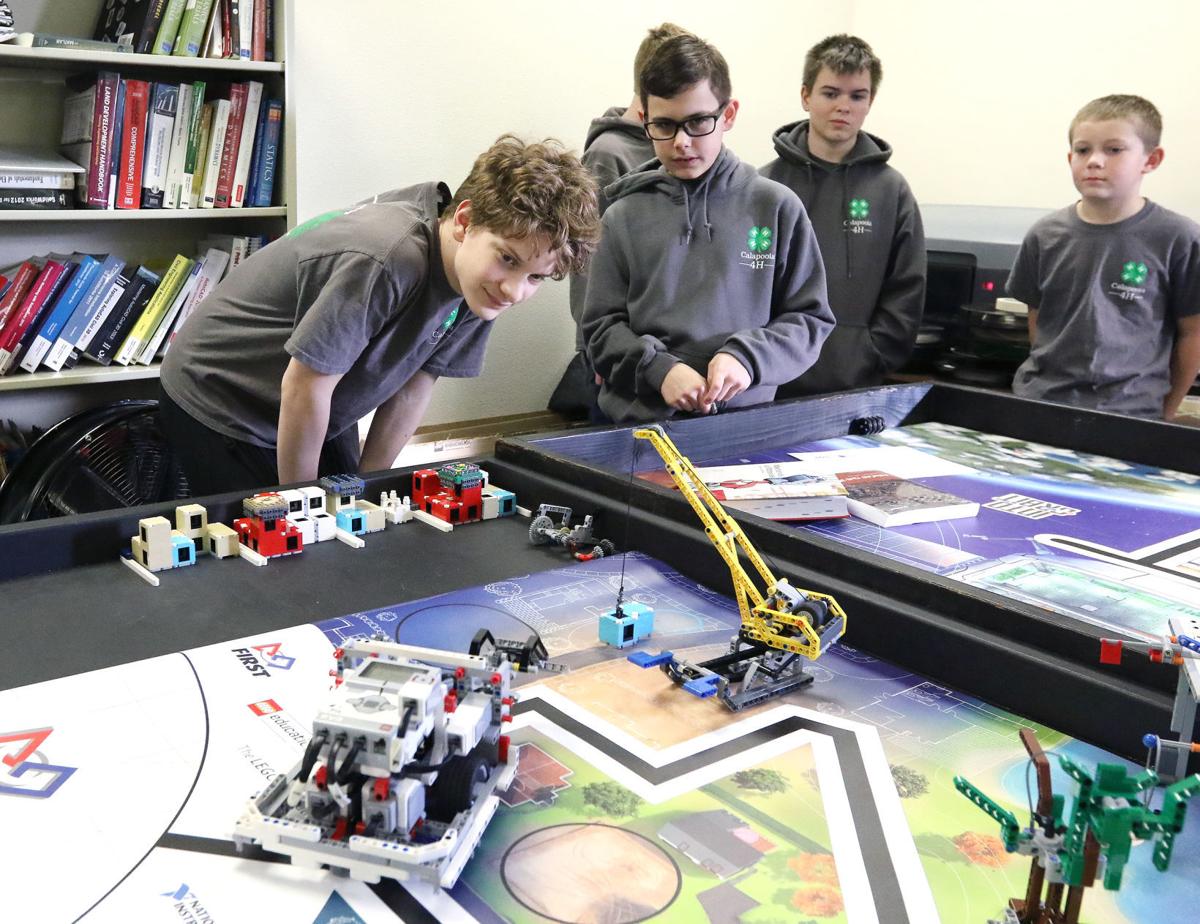 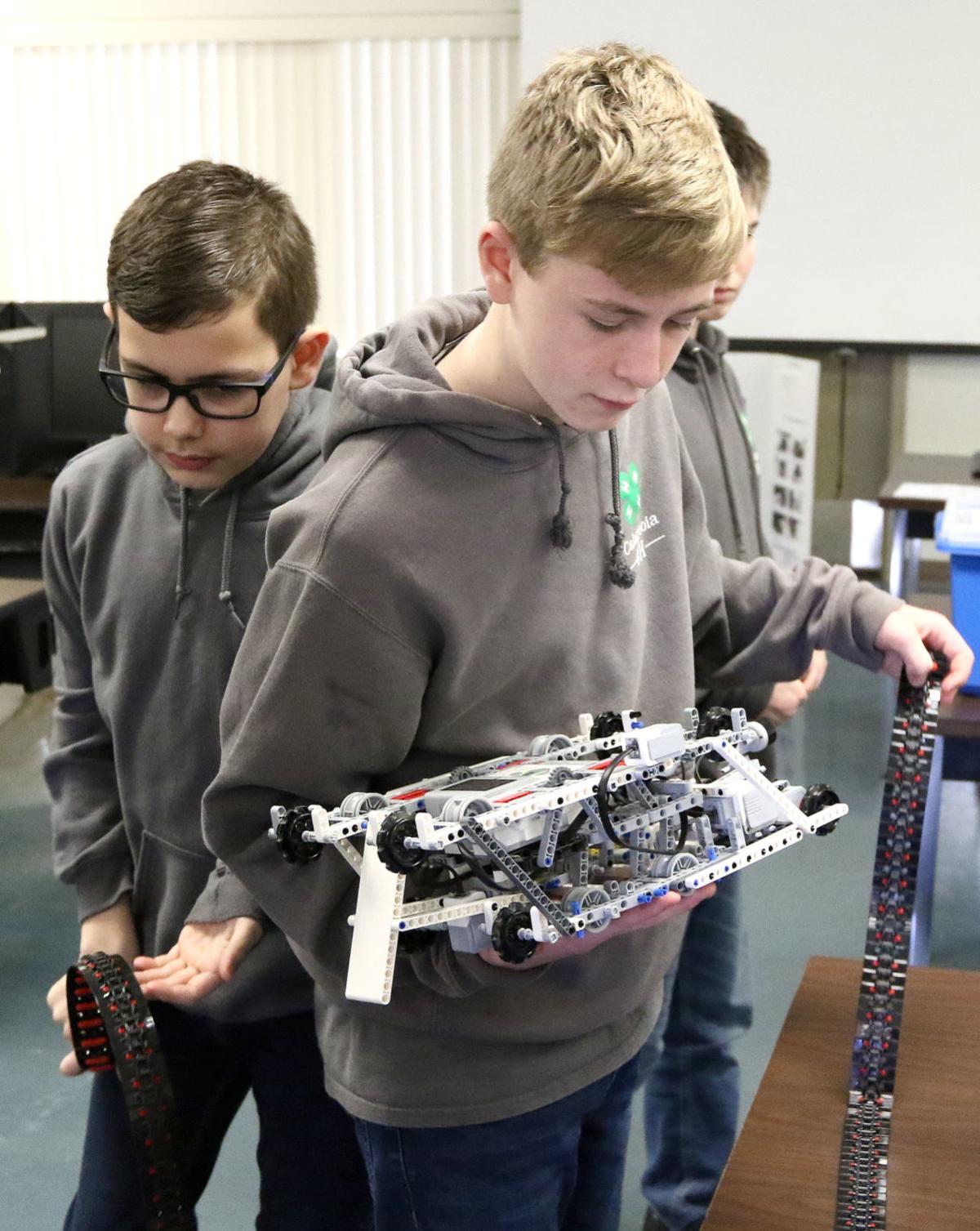 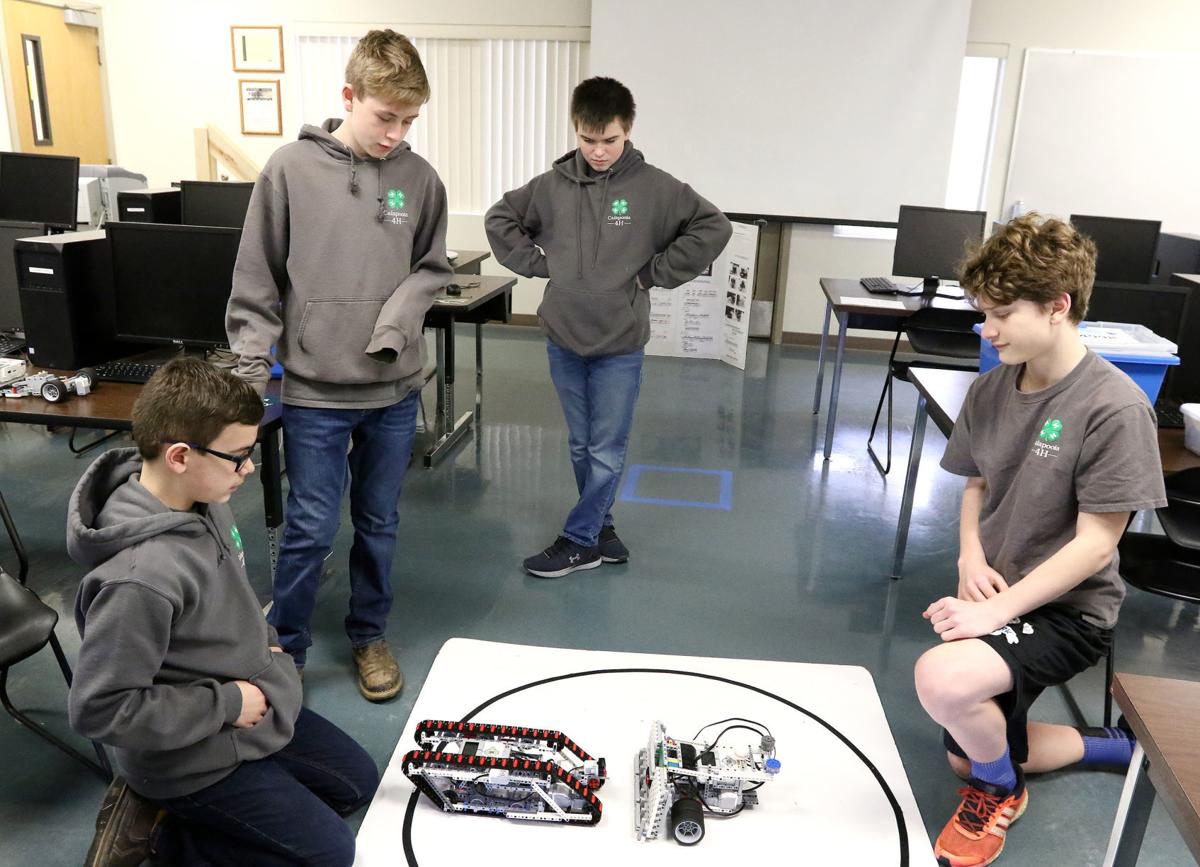 From left, Calapooia 4-H members Dylan Priest, James Baumgartner, Kyler Fischer and Jazz MacLean look on as a pair of the team’s sumo robots square off during a demonstration at Umpqua Community College on Friday. 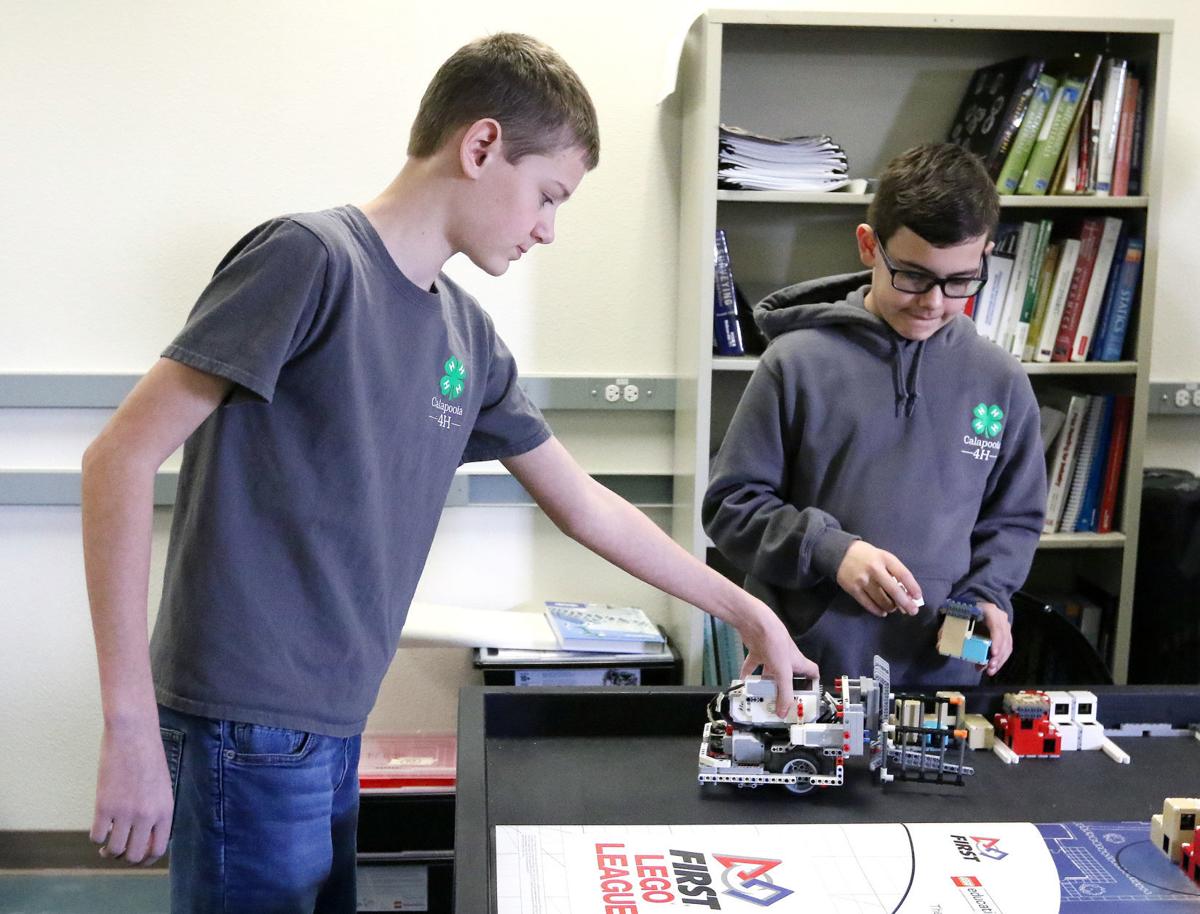 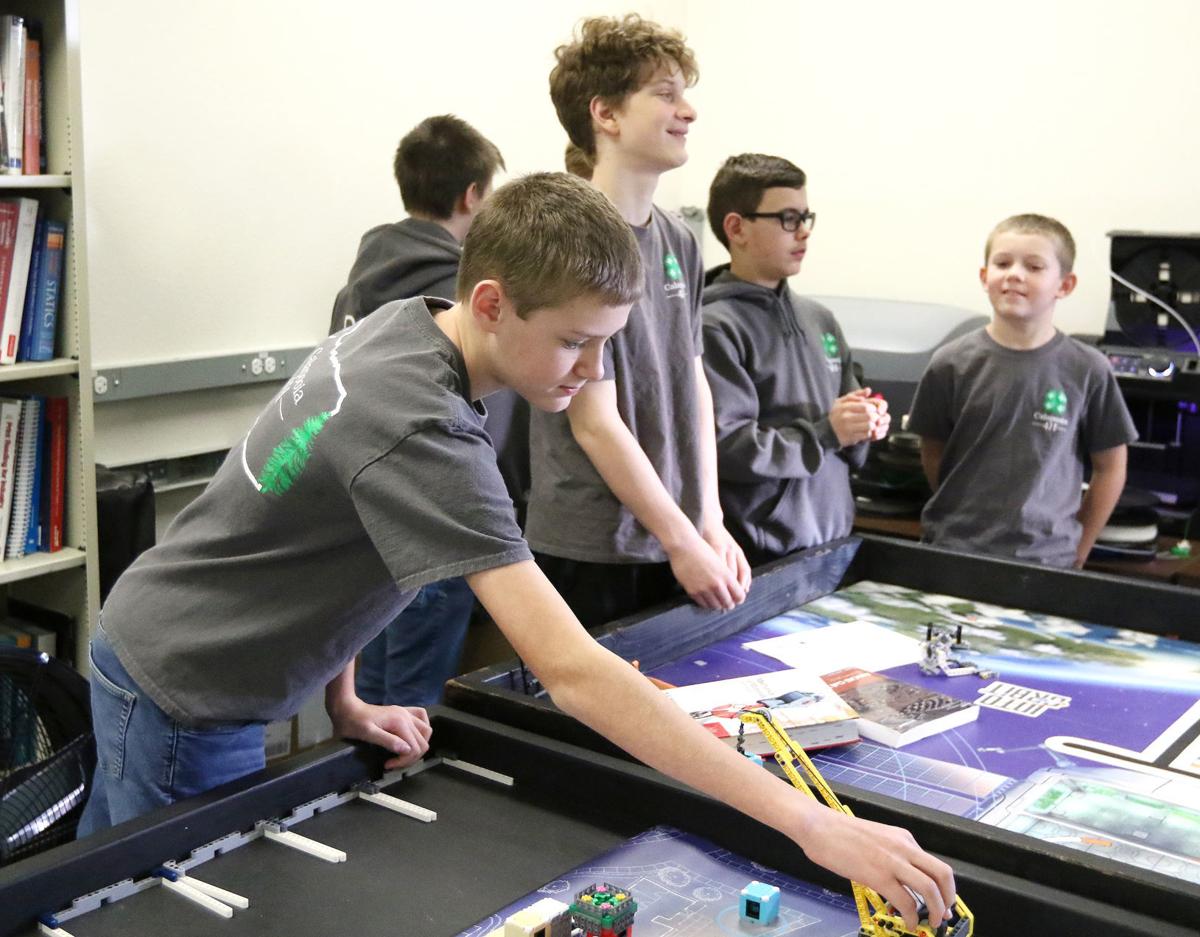 From left, Calapooia 4-H members Mason Thennes, Jazz MacLean, Dylan Priest and Lincoln Thennes prepare a course to demonstrate the capabilities of one their team’s robots on Friday at Umpqua Community College.

From left, Calapooia 4-H members Dylan Priest, James Baumgartner, Kyler Fischer and Jazz MacLean look on as a pair of the team’s sumo robots square off during a demonstration at Umpqua Community College on Friday.

From left, Calapooia 4-H members Mason Thennes, Jazz MacLean, Dylan Priest and Lincoln Thennes prepare a course to demonstrate the capabilities of one their team’s robots on Friday at Umpqua Community College.

Teamwork, problem solving and leadership are the fundamentals of the Calapooia 4-H team of six boys who recently won a robot programming award at the FIRST Lego League Oregon State Tournament in Portland.

The young men work in three subgroups of two to perform different duties with the robot.

“I’ve learned how to work together. Be patient,” 12-year-old Dylan Priest said. FIRST Lego League is robotics and programming for elementary and middle school students, and for many the precursor to joining the FIRST Tech Challenge league for seven through 12th graders.

During the FIRST Lego League competition there can be two boys at the table getting the robot ready, while they try to complete a mission and earn as many points as possible in two and a half minutes.

On Friday, they ran through some of the tasks they had programmed the robot to perform during a practice run, including lowering a block from a crane, pushing blocks into color coded circles, making a swing go, following a line and going up a ramp.

And even though they all contributed, the boys were quick to identify 14-year-old Mason Thennes as the programmer.

“Learning how to do specifics I learned from Clay (Baumgartner), but mostly I just got it off the internet,” Thennes said. “I’ve always enjoyed programming and I guess I just grabbed hold of it.”

According to 4-H Program Coordinator Teresa Middleton 4-H is the largest youth development program in the United States, reaching more than 6 million children a year. “We are all about youth learning by doing, having positive youth-adult partnerships, and helping youth find their spark,” she said.

In Douglas County, 4-H offers at least 45 different programs but can expand as long as there’s an interest and a leader in the project area.

The Calapooia 4-H robotics team is coached by Clay Baumgartner, a parent and chair of the department of technology and applied science at Umpqua Community College.

“The purpose is to get young adults interested in science and technology,” Baumgartner said.

In addition to making their robot compete in challenges, the boys also have to participate in public speaking and outreach.

Each year a team has to complete an innovative project, which this year involved city planning.

“The students choose the issue and develop creative and innovative solutions,” Cynde Pakros, FLL Championship director for Southern Oregon, said. “It’s more important that the solution is creative, researched, and presented to the community, than it is practical.”

The Calapooia 4-H club decided to focus on a problem they found in the community last year.

“Last winter, we had the snow storm and people were without power,” Jazz MacLean said. “So Dylan designed a hydroelectric power source.”

The power source can create electricity from any flowing body of water to keep power going during even the most dire circumstances.

“These kids are our future innovators, engineers and inventors,” Pakros said. “We encourage them to try, test, fail, make improvements, test again and repeat until you have found your best solution. They become more accepting of those little failures that lead to great solutions and build confidence in their ability by doing so.”