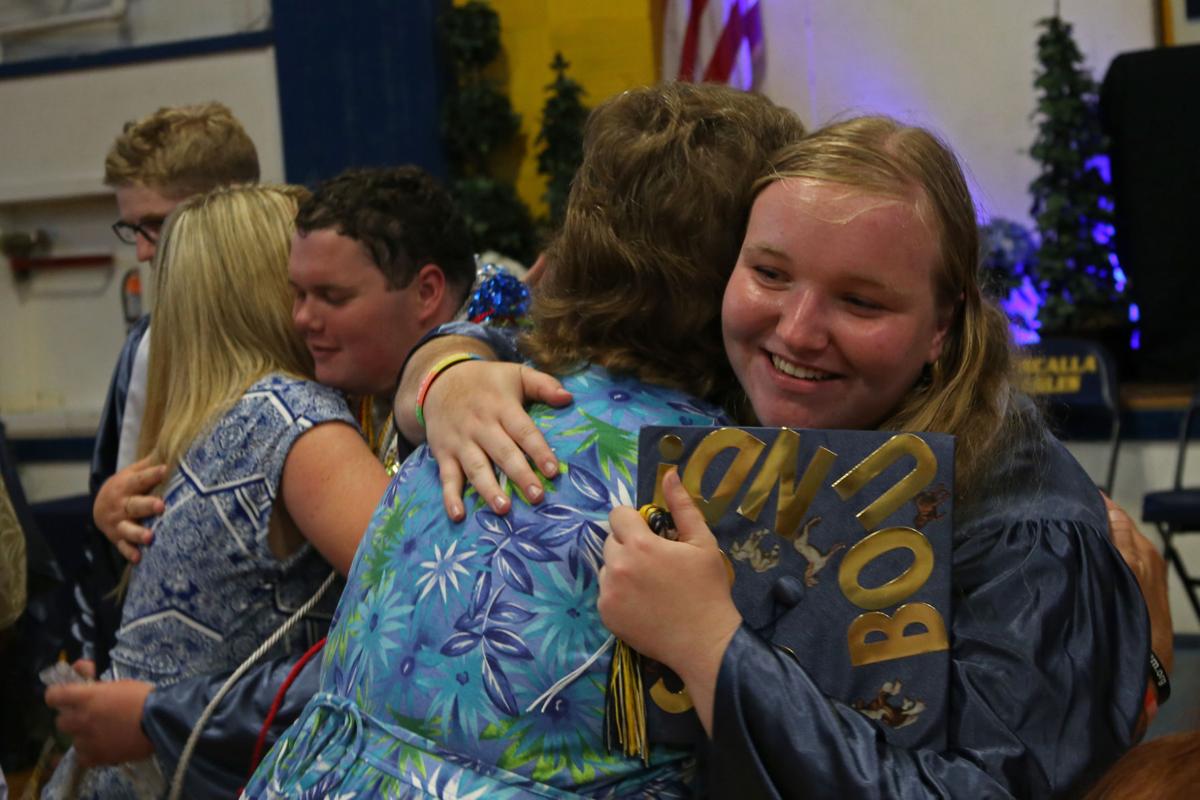 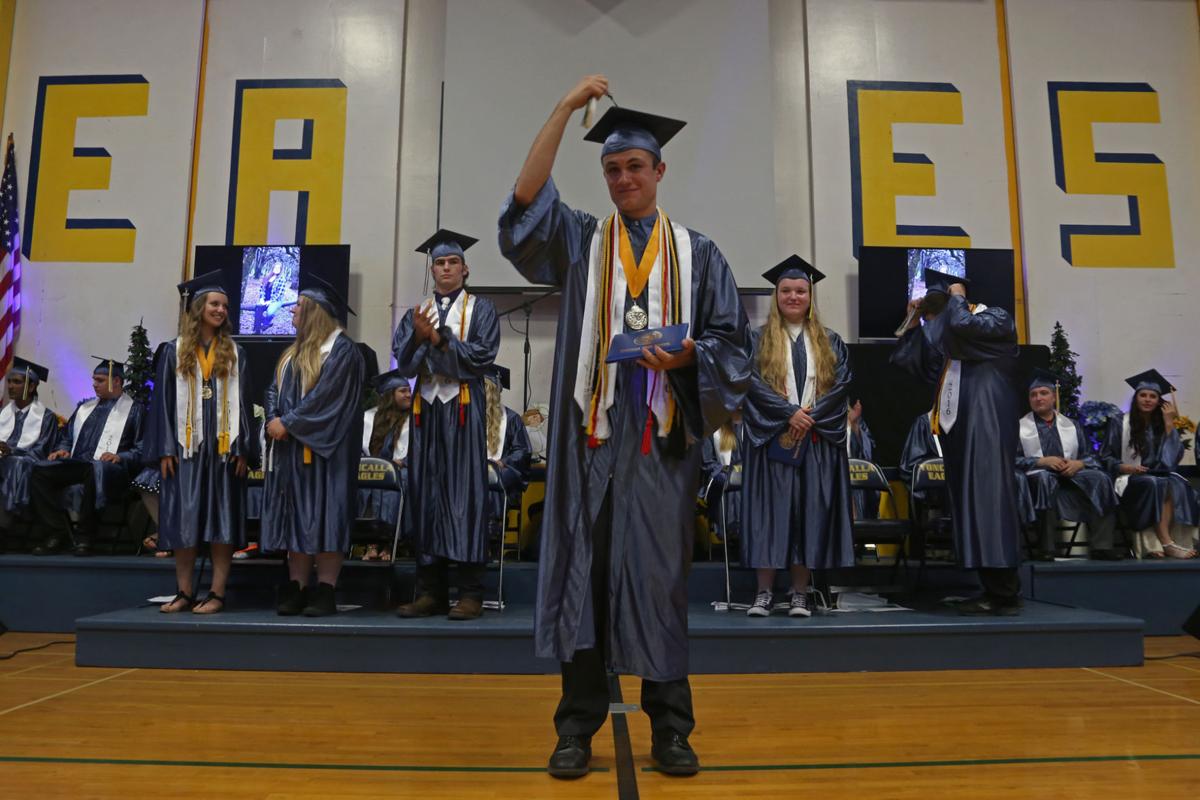 Valedictorian Tyler Gustafson turns his tassel during the commencement ceremony at Yoncalla High School on June 3, 20106. 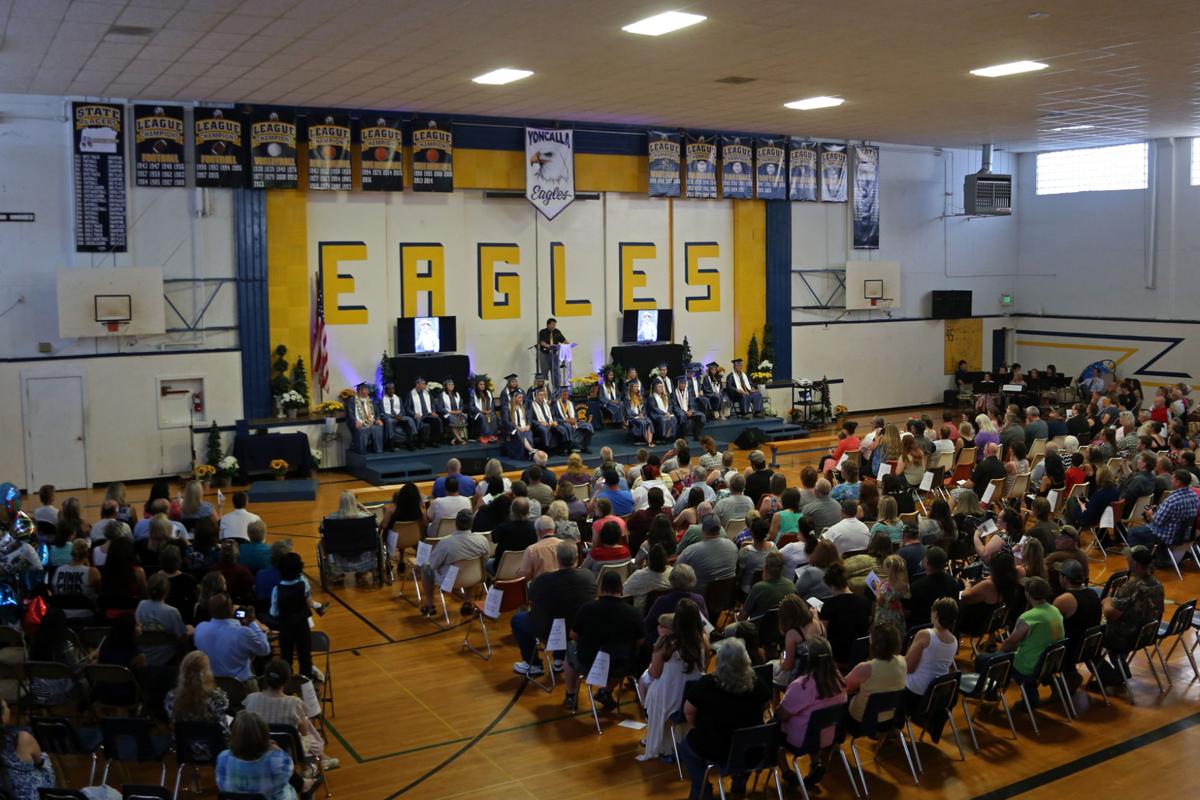 Valedictorian Tyler Gustafson turns his tassel during the commencement ceremony at Yoncalla High School on June 3, 20106.

A few hundred people packed into a sweltering gymnasium Friday evening to celebrate the 2016 graduating class of Yoncalla High School.

Yellow flowers decorated the stage, which held 19 chairs for the graduates and two TV screens that simultaneously played through a slideshow of the graduates’ senior pictures throughout the event.

After a welcoming address, the school’s salutatorian, Abigail Lyons, took to the podium dressed in a royal blue cap and gown accented by a white graduation stole.

“Wow, it is hot up here,” she said to the laughter of the crowd. “High school has been a big adventure and journey. It’s been interested to go through all the struggles, but to also go through all of the fun time that we had together.”

During her speech, Lyons thanked teacher Paul Staudhammer, whose quirky sense of humor made learning more enjoyable. As an example, Lyons told the crowd how Staudhammer wagered his class that if anyone could memorize a lengthy and complicated song about the periodic table, he would give that student an A on the final exam.

Clearing her throat and taking a deep breath Lyons leaned toward the microphone and sped through the entire song with ease.

“So Mr. Staudhammer, if we could change my grade, that would be great,” she laughed.

Together, the 19 graduates earned more than 130 college credits, received approximately $100,000 in scholarships, and brought home multiple athletic and academic awards throughout their high school careers.

“They’ve been huge to our community,” said principal Brian Berry. “They’ve done blood drives, a few are really involved in their church, and we’ve got 80 percent of them going on to further their education, which is a really big accomplishment.”

One of those students who is planning to attend college next year is Megan Simons, a member of the National Honors Society who also received an honors diploma. She will be attending Oregon State University with aspirations to become a professional horse trainer for The Walt Disney Company.

After embracing a line of family with friends, Simons said the past four years had been a whirlwind.

“It’s such a mix of emotions,” she said. “But I’m just so glad it’s done and I’m very pleased with all of the scholarships and awards I was able to receive.”

Simons, who decorated her graduation cap with horse stickers and gold letters that read “OSU Bound” said she’ll miss the relationship she had with her teachers the most.

“They’ve all helped so much, not just at school, but in my own personal life,” she said. “They’ve always been there and they’re all people I look up to.”

Valedictorian Tyler Gustafson, who spent most of the night walking back and forth to collect multiple awards and scholarships, said the celebration really made him realize how much he will miss being a Yoncalla Eagle.

“I’m going to miss the team aspect of it all,” he said moments after lobbing his graduation cap into the air. “We’ve gone a long ways together and I’m just going to miss them all. Even though I’ve only been here since my sophomore year, we all seemed to bond so quickly.”

As the ceremony came to a close and families began to wander to the outside lawn, one little boy tugged on his mother’s pant leg and pointed outside.

“So they’re all going off to be doctors and professionals,” he asked.