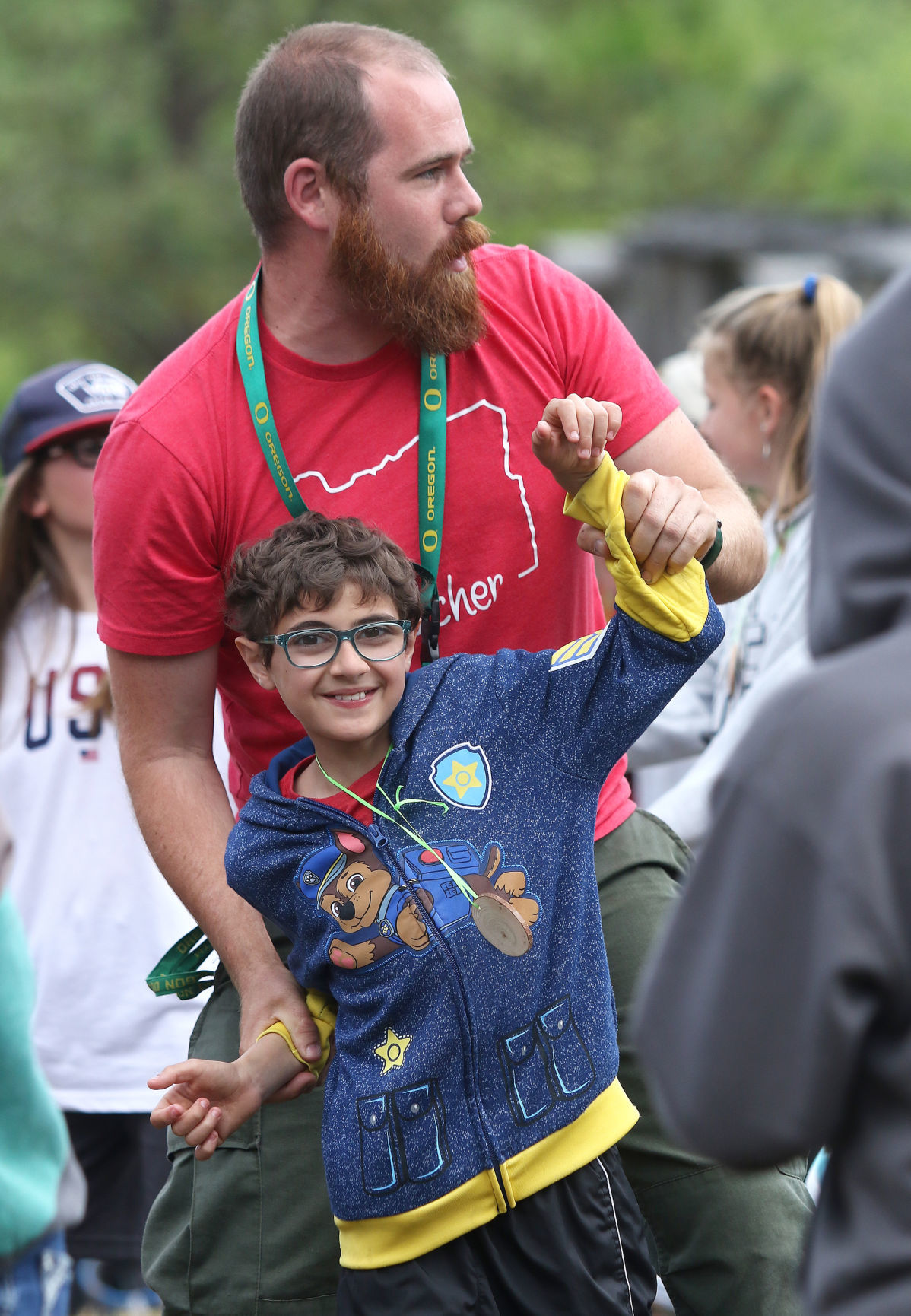 Eastwood Elementary School fifth grade teacher Camron Pope helps fifth grader Christopher Page out with his dance moves as they participate in a line dance during Camp Eastwood on Wednesday. 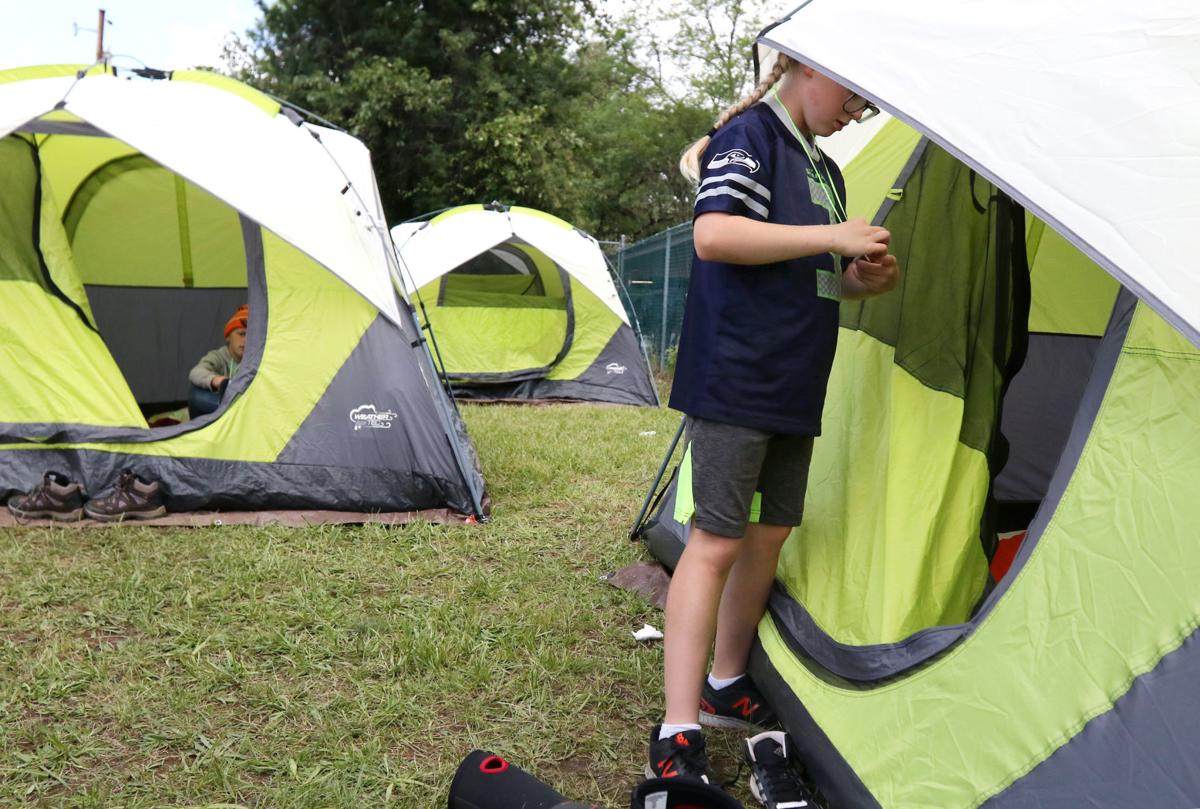 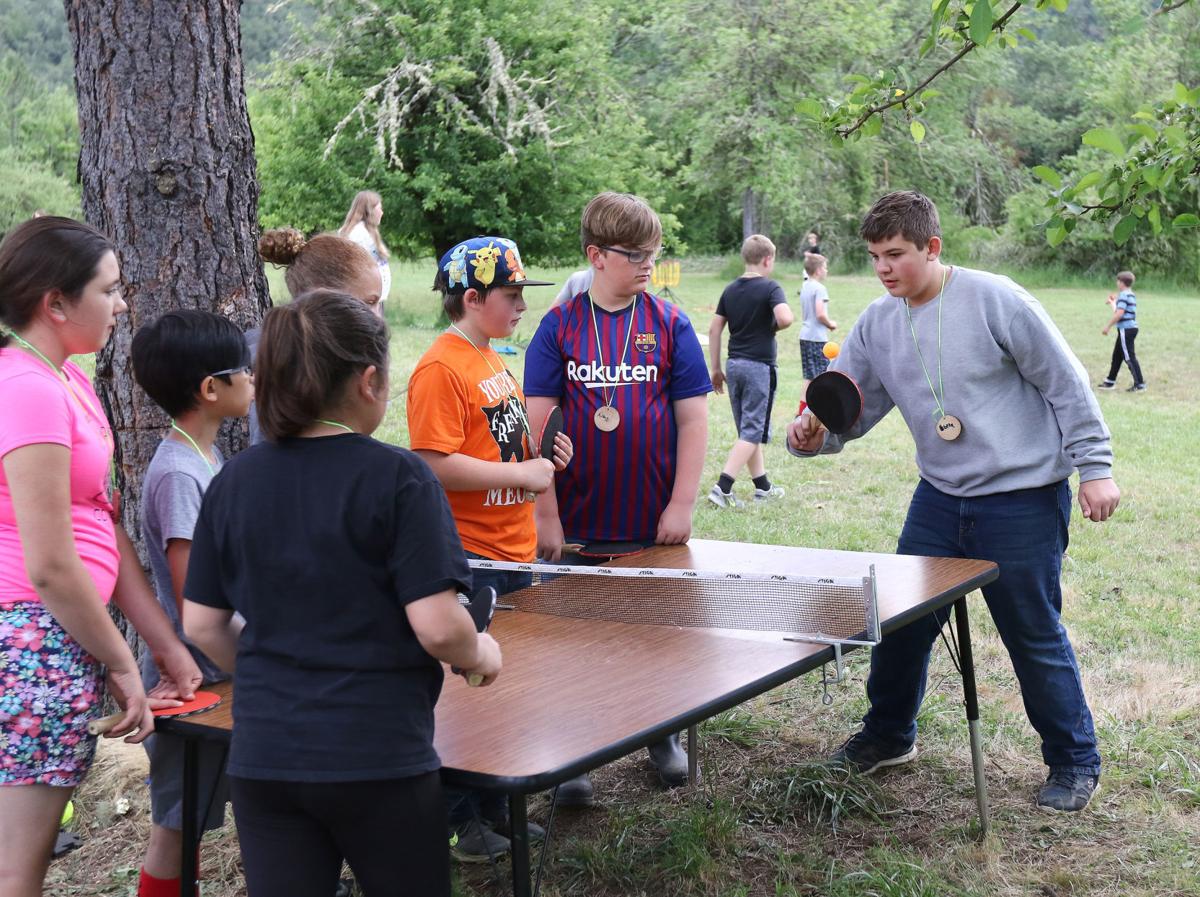 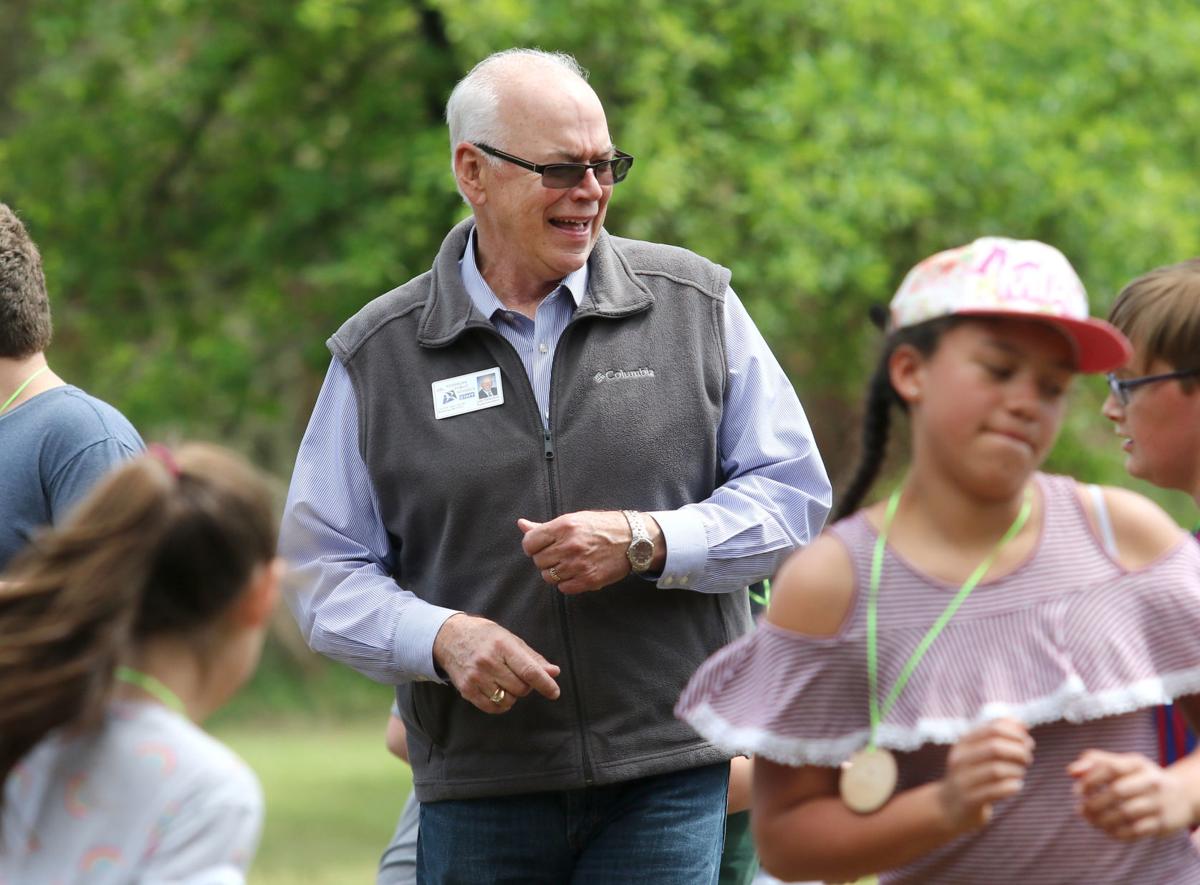 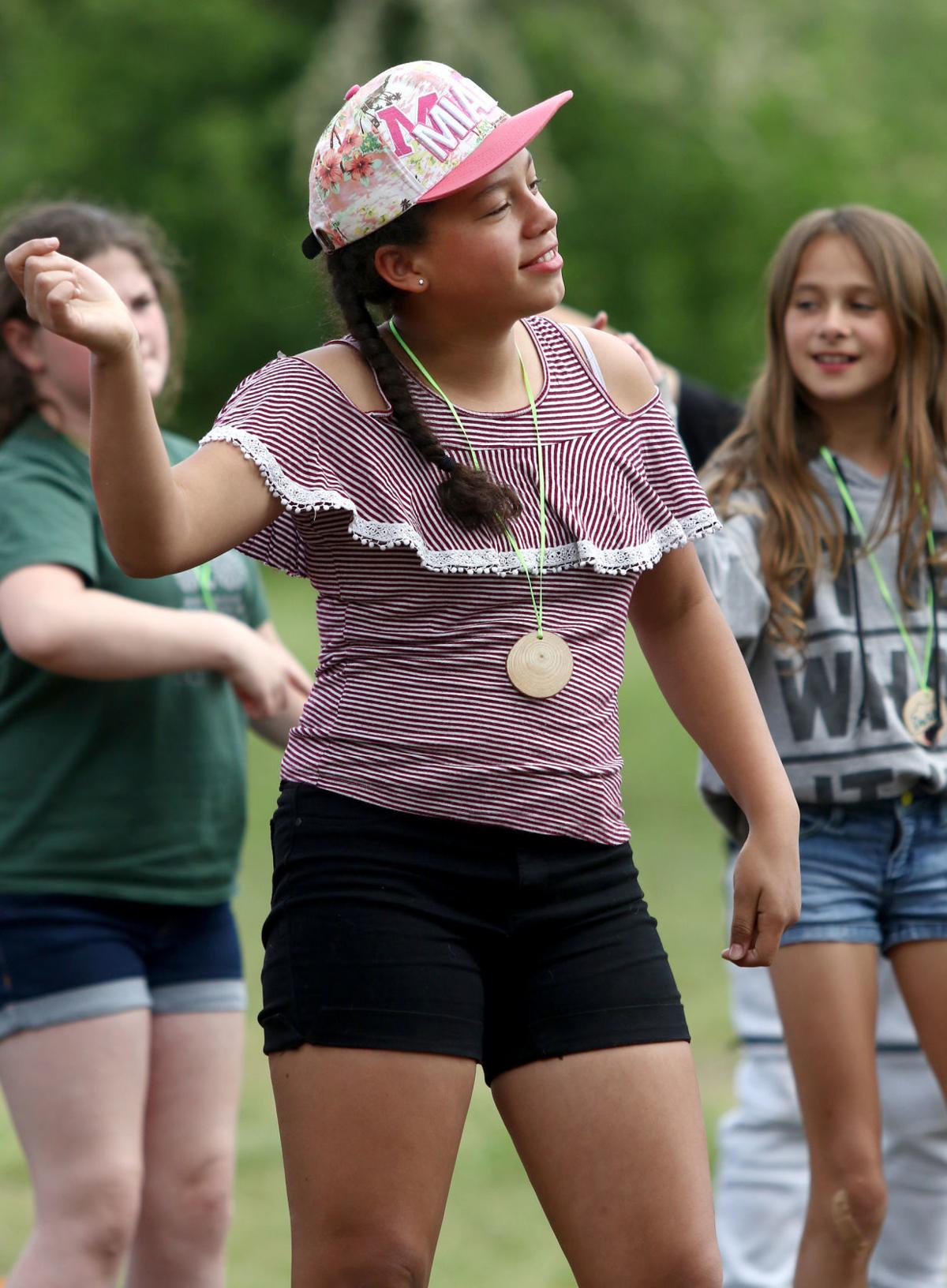 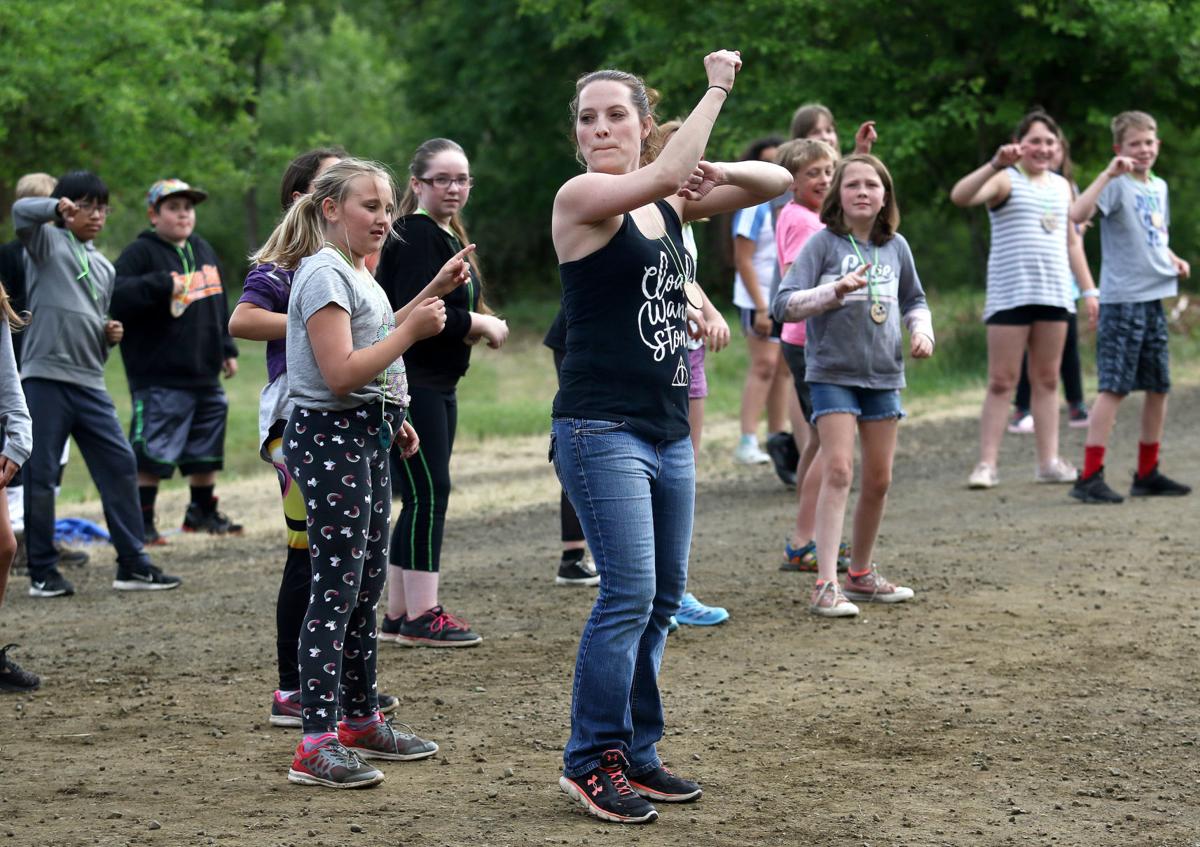 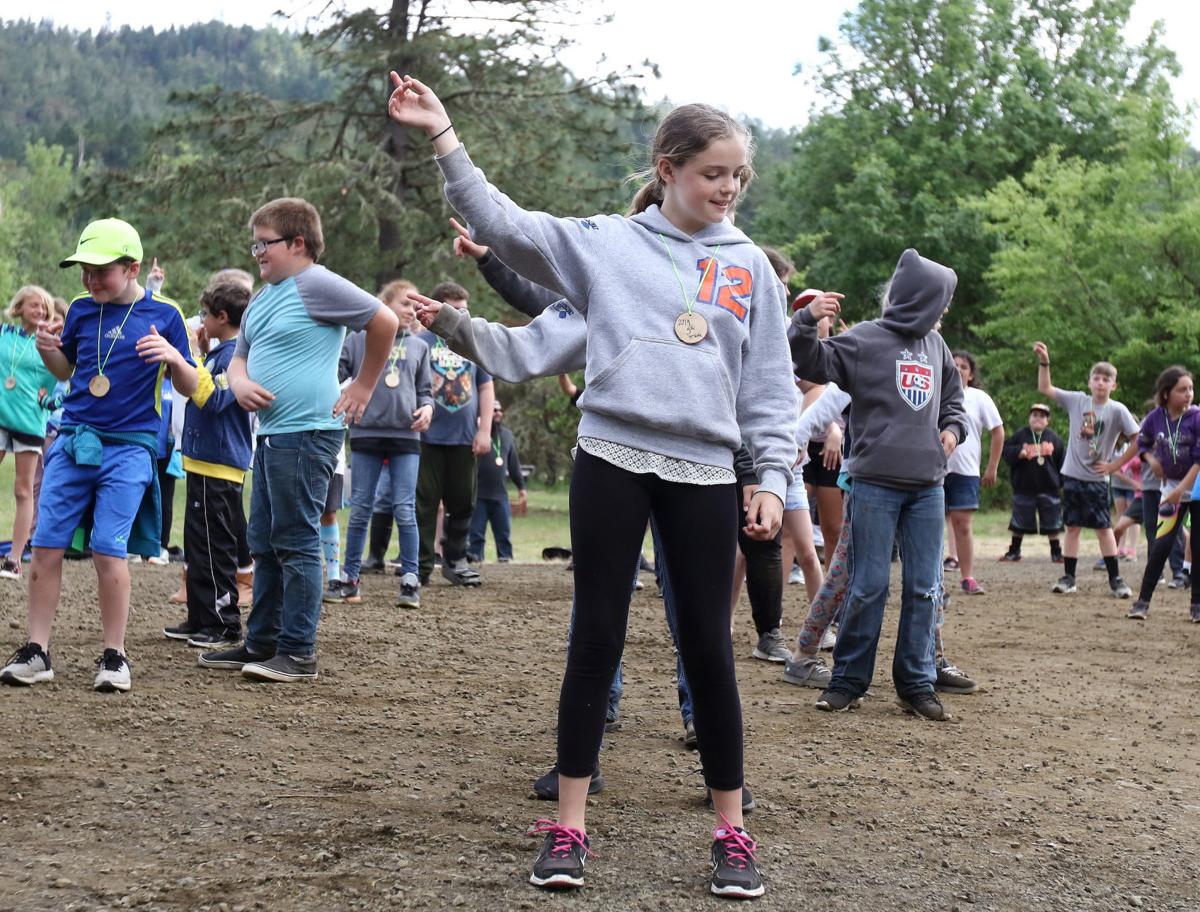 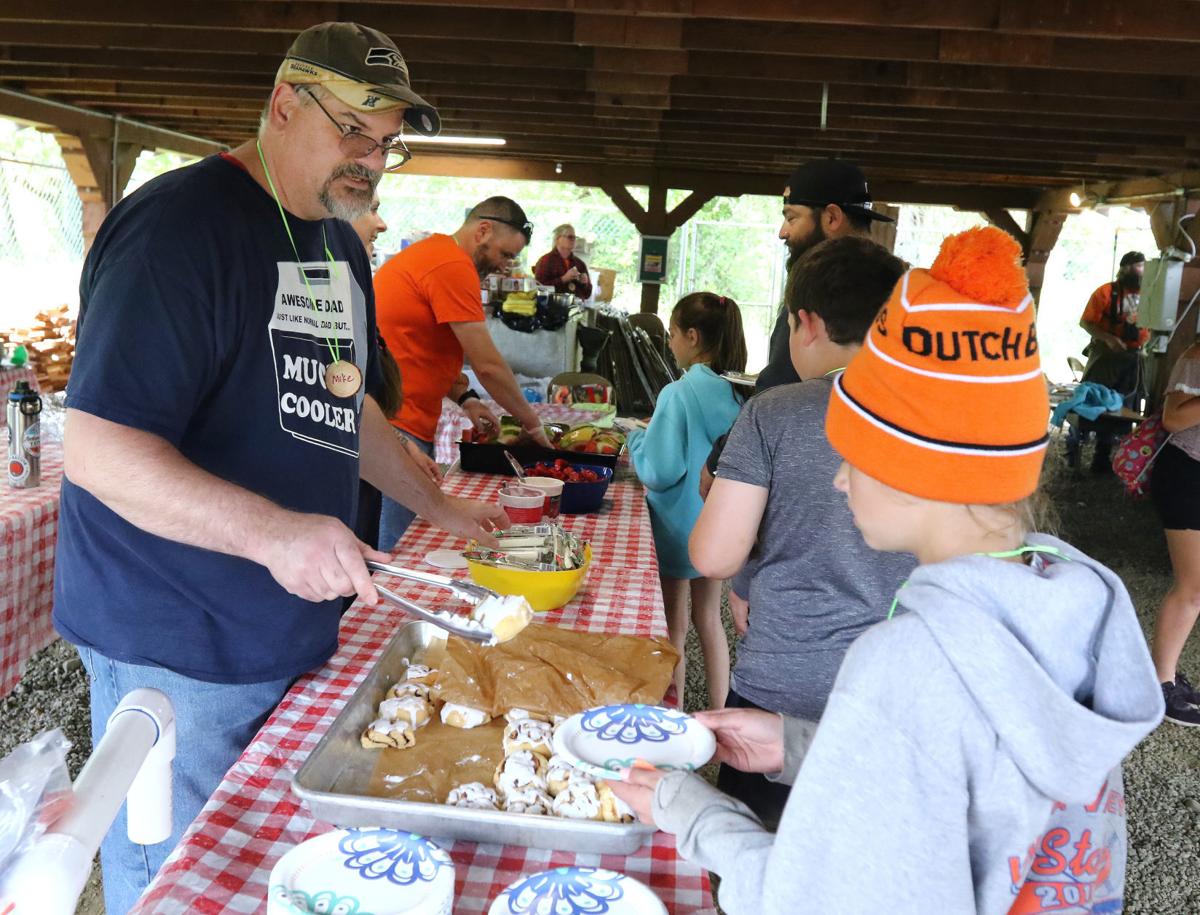 Eastwood Elementary School fifth grade teacher Camron Pope helps fifth grader Christopher Page out with his dance moves as they participate in a line dance during Camp Eastwood on Wednesday.

During the day, students took part in seven 45-minute classes that related to the outdoors, such as tree studies, panning for gold, macroinvertebrates, Fibonacci sequences and others.

“I really like to do the classes,” fifth grader Lilly Nichols said. “The ones I like are Fibonacci, tree talk and gold panning. Yesterday I also got to do macroinvertebrates, and we caught lots of bugs in the creek.”

After the classes let out, students participated in a line-dancing session to “Stayin’ Alive” by the Bee Gees, led by teachers Erica Workman and Pope.

On Wednesday afternoon, Roseburg Public Schools interim superintendent Lee Paterson even joined in on the dancing.

There was also plenty of recreational time, where students got the chance to play disc golf or capture the flag, or do unstructured activities like pulling each other around on tarps and kicking a ball around.

Students were taught camp songs, and they participated in a Native American drum circle Wednesday evening.

“They’re engaged in learning all day,” Pope said. “They are having fun and learning something.”

Fifth grader Cruz Dirksen’s mind was focused on the food.

Eating was his favorite part of the camp, where he was served “hamburgers, cinnamon rolls, cookies, and dessert.” Pope said tacos were on the menu Wednesday night.

Camp Eastwood has taken place for seven years. Prior to that, fifth graders from the school would take a camping trip to Camp Hancock in Fossil.

“Being in your own backyard makes it easier, less stressful and you still have the camp experience,” Workman said.

Teacher Cindy Long has participated in the camping experience at Eastwood for nearly 15 years, both at Camp Hancock and at Camp Eastwood.

She said that although Camp Hancock was amazing, having the opportunity to do it closer to home has been beneficial to campers, families and staff.

Children who were sick for one day were able to rejoin their classmates, parents are able to help out when they can, younger siblings can check in and family members of the staff were able to join in some of the camp’s activities.

About 50 volunteers helped out at Camp Eastwood this year, including parents, staff and AmeriCorps volunteers from Umpqua Watersheds.

The camp is free to students with the help of Measure 99 funding, and a grant through the extension service and lottery dollars. The school also hosts several fundraisers throughout the year to make sure all kids can attend the camp.

Throughout the years the school has been able to purchase tents, sleeping bags and a hand washing station for the campers.

This year 75 students participated in the camp, 72 spent the night on campus and three students were day campers.

Amilia Vandyke and Lucy Harvey shared a tent and Lucy said “it takes a minute to get to sleep, because everybody is pretty loud.”

Lucy had experience camping with her family, but Amilia was new to camping but said she’d love to do it again.