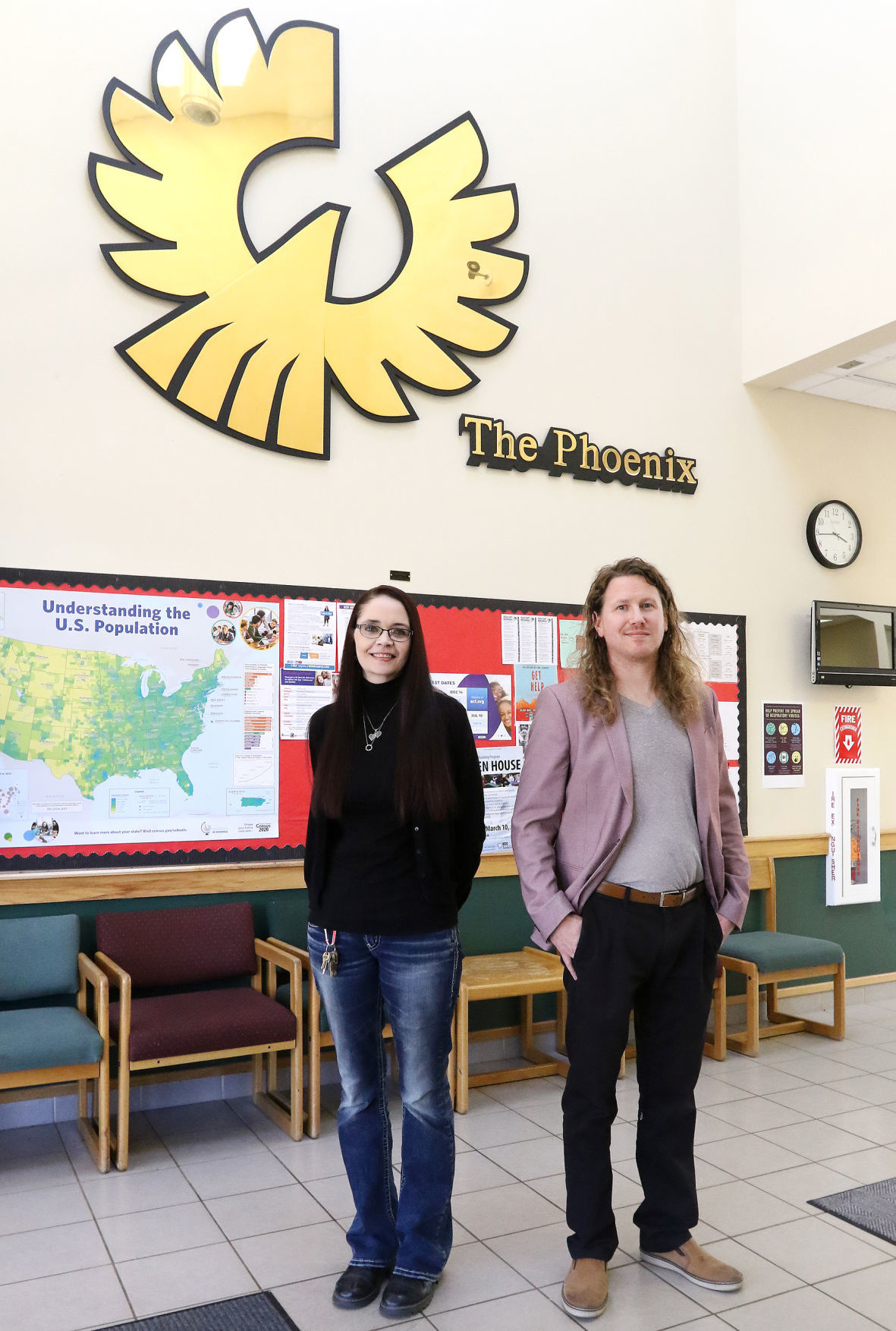 Phoenix School Principal Brandy Osborn and Executive Director Thomas McGregor pose for a photograph in the entryway to the Roseburg school on Friday. 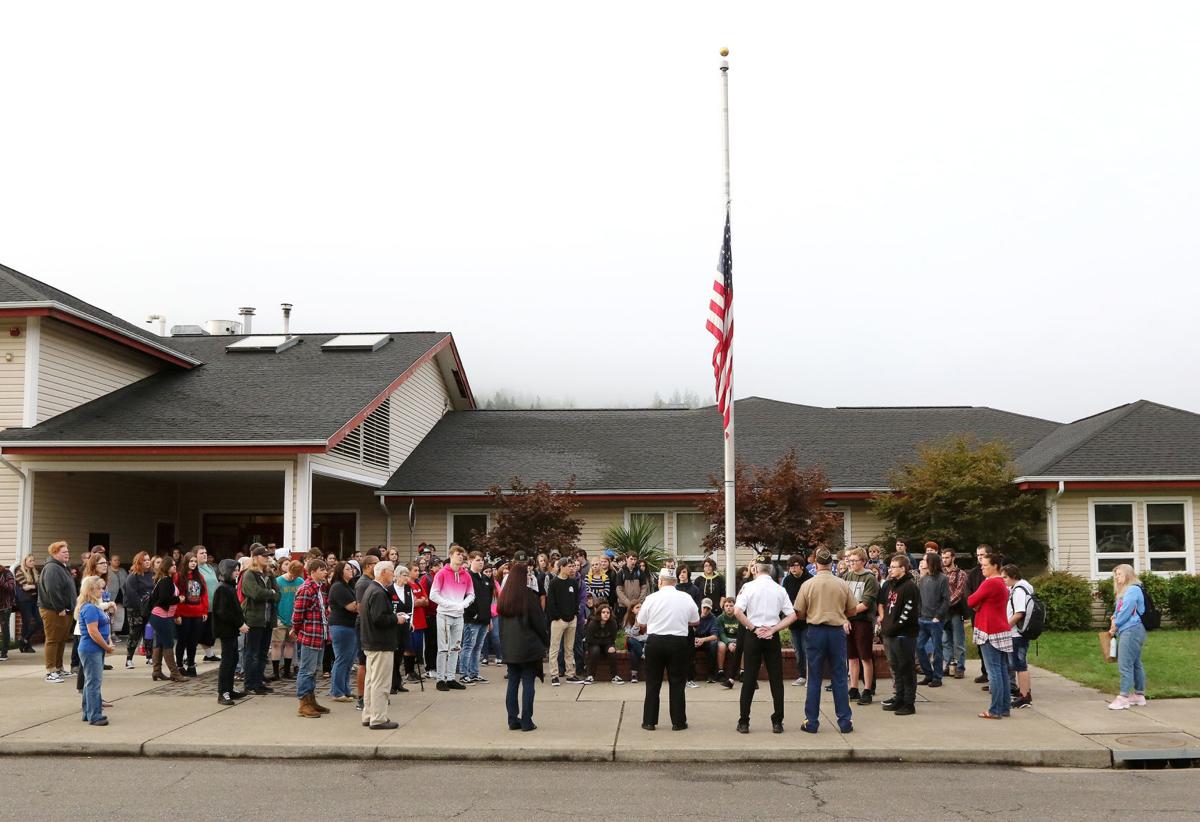 FILE PHOTO Phoenix School students and staff gather for a 9/11 remembrance ceremony in front of the Roseburg school in 2019.

Phoenix School Principal Brandy Osborn and Executive Director Thomas McGregor pose for a photograph in the entryway to the Roseburg school on Friday.

FILE PHOTO Phoenix School students and staff gather for a 9/11 remembrance ceremony in front of the Roseburg school in 2019.

It’s been 39 years since Phoenix School opened in Roseburg and for its 40th anniversary the institution hopes to continue evolving with a name change to Phoenix Odyssey High School.

Changing the name will also create a better distinction between the overarching nonprofit corporation, Phoenix School or Roseburg, and the school — which is currently doing business as Phoenix Charter School.

Phoenix School of Roseburg was founded in 1981 by educators who wanted to provide students a safe and engaging environment in which they could learn and grow, according to the Phoenix School website. The school became a charter school about 15 years ago.

McGregor said in the past few years, students from the school have participated in regional and statewide events through career technical service organizations, where other students would ask if they were in a normal school.

“When I got that feedback, it hurt,” McGregor said. “That the name of a school could be perhaps an innocent misunderstanding, or perhaps an avenue for bullying.”

So, staff at the school decided to look at what’s important to them, which includes building community and continuing to grow.

Learning to build strong relationships between students, staff and community has been a priority since Principal Brandy Osborn joined the team three years ago.

“The staff and Brandy started to look for ‘What can we call us,’” McGregor said. “They went to where all great minds go to in the 21st century — they went to Twitter. And the answer is, a large group of phoenix is called an odyssey.”

Odyssey is also a synonym for a journey, which ties in to the school’s slogan “Journey to rise up,” meant to inspire students and staff to grow through their challenges and overcome difficulties — similar to a Phoenix rising from the ashes.

“It’s really rough growing up,” McGregor said. “It’s always been helpful to describe that with teenagers in the regard that ‘It’s all just a journey. It’s a path and who knows where your road will take you, but you’re on your path and that’s where you’re meant to be.’”

But just because there’s a change in the name, doesn’t mean other things will drastically change at the school.

And while the name may change to Phoenix Odyssey High School, the school will continue serving eighth grade as well.

At the time the school was founded, it was named for the mythological phoenix, because of its ability to be born again, renewed from its own ashes.

“At Phoenix Charter School we believe that every student has the ability to overcome, like the phoenix, challenging circumstances to arise as a newer, better version of the past self and we work diligently to provide each student with such opportunities,” the website reads.

When the school became a charter school, it was because it would become a “school by choice” where students didn’t need to live in a certain area to attend, and they didn’t need a referral or meet certain qualifications.

”We still see the traditional student that we’ve always served, that’s needing a different option and perhaps doesn’t have many assets at home, but in the last 10 years with the charter school our population has also been students with lots of assets in the home and they just wanted a smaller school, they just wanted a different approach, they wanted something different.”

Just like other schools in the area, the coronavirus closed the school and also lead to the cancellation of the nonprofits’ spring fundraiser.

“The uncertainties with COVID-19 really leave us with a place needing support,” McGregor said. “We need support right now, because we want to be here in another 40, or 400 years.”

Osborn said she hopes in 40 years the school will still be there, with even more hands-on, student-based learning that will be able to impact the community.

“We continue to make sure that students are ready for the workplace,” she said.

Most of the students who attend the school stay in Douglas County and making sure they have the skills necessary to become meaningful additions to the workforce locally is one of the goals.

McGregor said not having the school’s biggest fundraiser means he won’t have the opportunity to say, “Thank you, it’s because of you we’ve been here for 40 years and doing the good work we’ve been doing,” a message he hoped to share as the anniversary comes up.