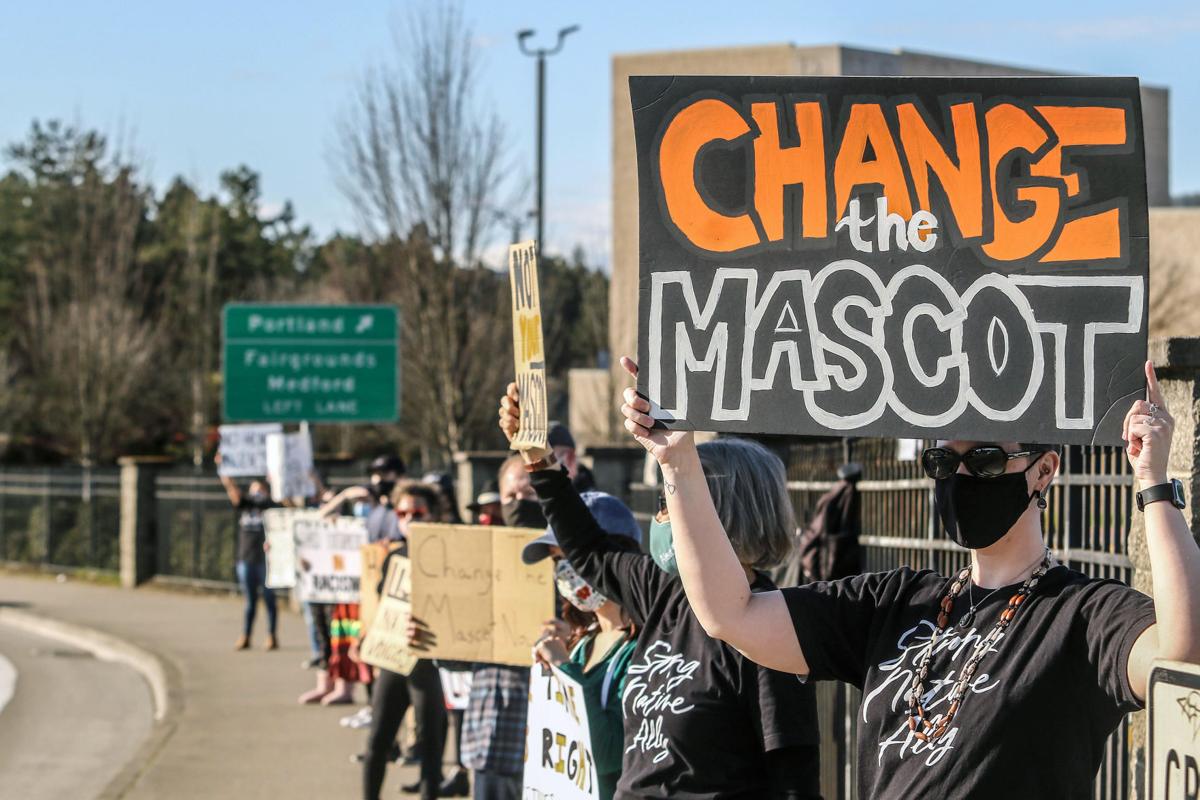 Megan Bentley, right, joins more than a dozen other protesters in front of Roseburg High School calling for the removal of the Roseburg Indians mascot 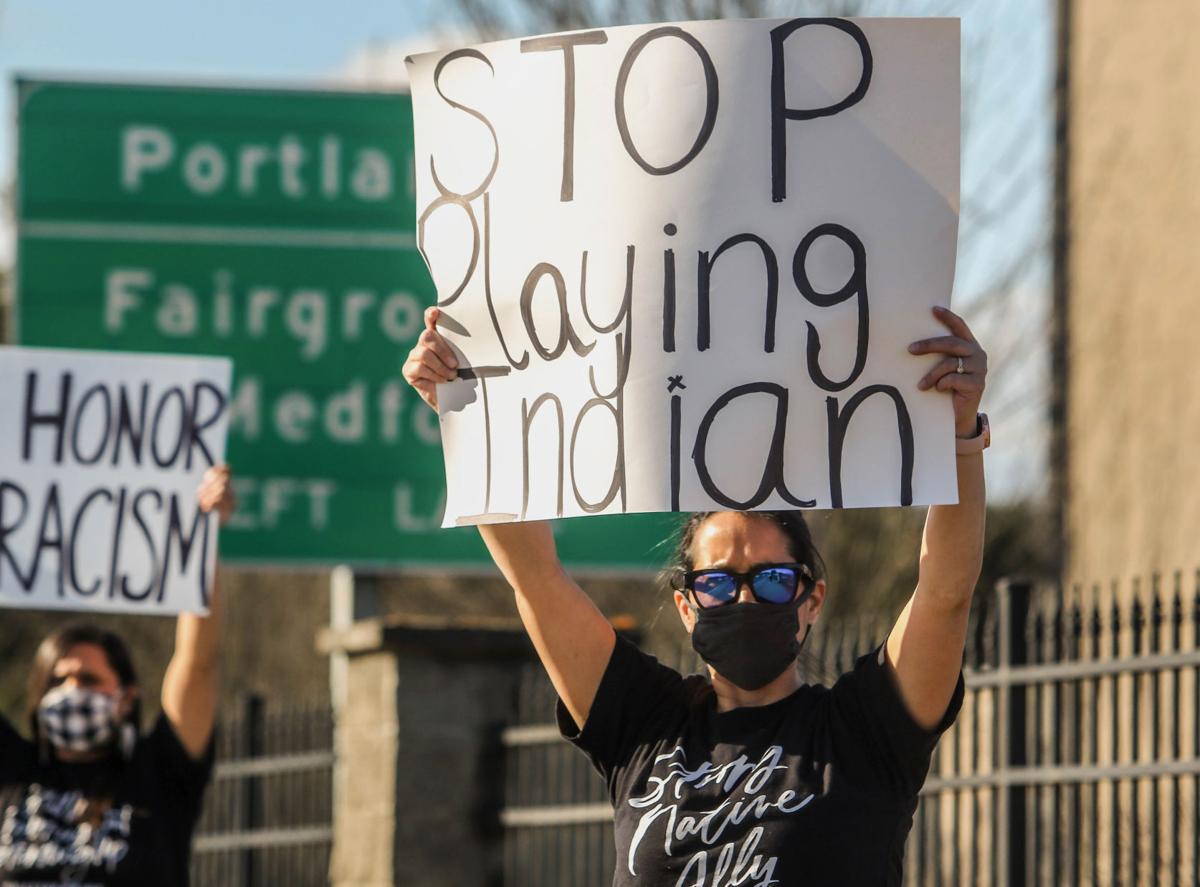 Andrea Falgout, right, and Angela Walker hold up signs calling for the removal of the Roseburg Indians mascot prior to a meeting of the Roseburg Public Schools board of directors Wednesday night. 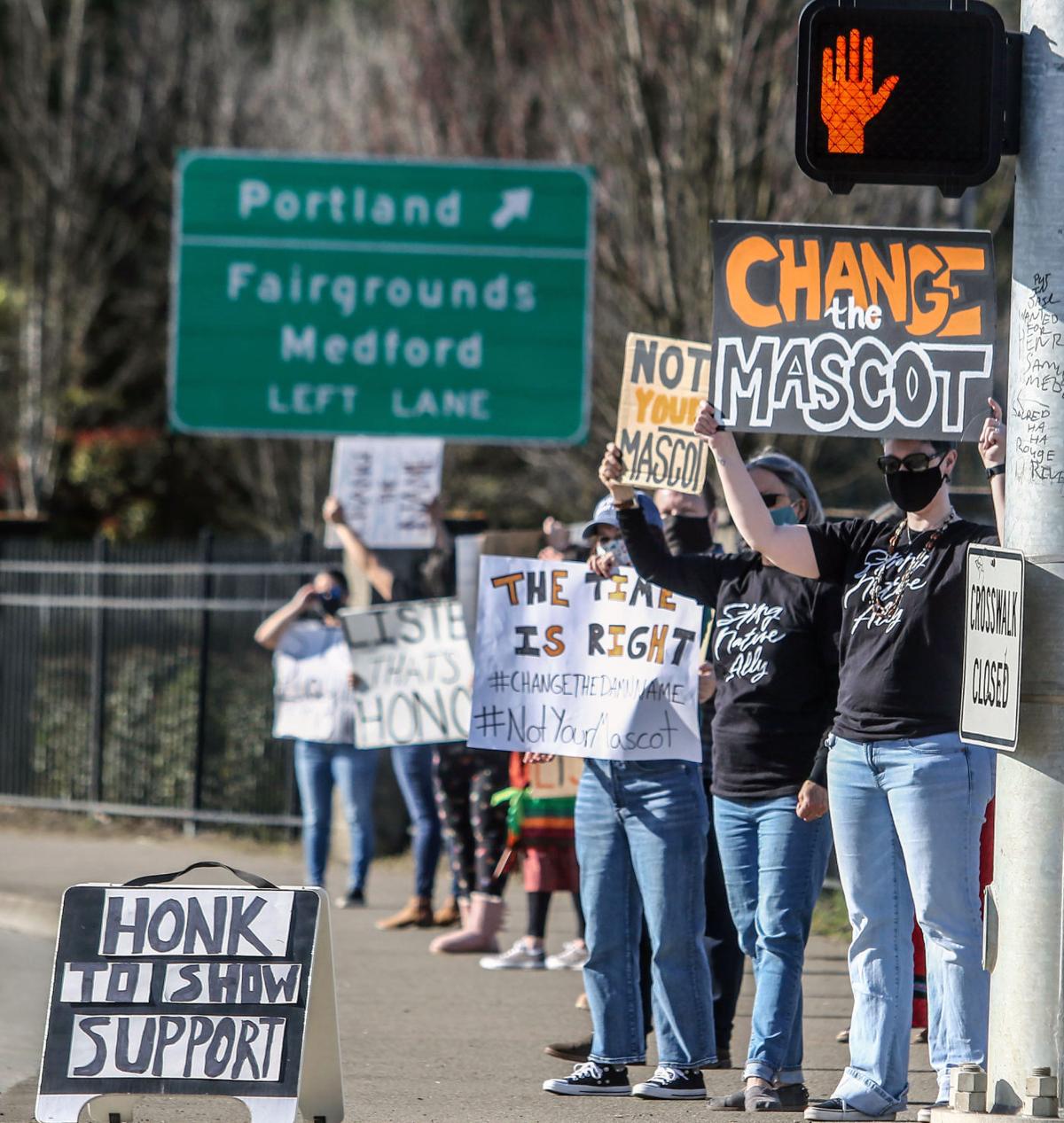 More than a dozen protesters gathered Wednesday in front of Roseburg High School to show support for changing the school’s mascot.

Megan Bentley, right, joins more than a dozen other protesters in front of Roseburg High School calling for the removal of the Roseburg Indians mascot

Andrea Falgout, right, and Angela Walker hold up signs calling for the removal of the Roseburg Indians mascot prior to a meeting of the Roseburg Public Schools board of directors Wednesday night.

More than a dozen protesters gathered Wednesday in front of Roseburg High School to show support for changing the school’s mascot.

The Roseburg High School mascot has been a topic of contention within the community for several months, but the Roseburg Public School board of directors did not discuss or take any action on the issue during Wednesday’s meeting.

Public comments that were shared with board secretary Janet Kischel prior to the meeting were not read aloud during the meeting, but instead given to the directors.

“Given our meeting circumstances in the extreme, we did accept public comments and those have been printed out and given to each of the board members,” school board chair Rebecca Larson said. “If you sent something in, please know that we did get those and received those and we’ll go through those. Please know that we are listening.”

Prior to the meeting, more than a dozen people met in front of the high school and held up signs protesting the use of the Indians mascot, less than a month after a similar protest on Wednesday, Feb. 24.

Jennifer Singleton, who has spoken out in favor of keeping the mascot, said she was surprised the topic wasn’t brought up at the meeting. Singleton added that she hoped people interested in the mascot topic tuned in for the meeting to learn what was going on in the school district.

The school district received seven letters prior to the meeting, which were obtained by The News-Review via a public records request.

Pretty Deer Eagleman, a representative and board member of the national Native American Guardian Association, was the only one writing in favor of keeping the mascot and added a letter from the organization.

The other six letters asking for the mascot to be retired.

“No matter whether the intentions are or were meant to be ‘honouring’ or ‘noble,’ I do not believe that ANY GROUP OF PEOPLE should be used as a mascot,” RHS alumnus Trina Johnson wrote.

Owen Bascom, 14, also wrote to the board expressing that the people who want to keep the mascot are white, not native. “What if I was in your stands and had to listen to the opposing teams chant ‘Let’s beat the Indians!’ or yell ‘Indians suck!’ Is that safe for me or any Native student who attends your school?,” he wrote. “Your racism cannot be contained in Roseburg either. This could happen at your away games as well.”

The school board meeting was live streamed via YouTube. Board members met at the Rose Theatre at the high school, while no public was allowed to adhere to the strict guidelines set by the state because of the high COVID-19 case counts in Douglas County.

The board continues to meet in person to show solidarity with the teachers who continue to work in the classroom.

School board vice chair Steve Patterson and director Rodney Cotton were excused from the meeting.

During the meeting, the school board approved the calendar for the 2021-2022 school year — which is set to start on Aug. 30 and end on June 9 for students, with Roseburg High School graduation scheduled for June 4.

The board also expressed interest in a Public Employees Retirement System pension bonding proposal for up to 4.5% maximum interest cost.

A report from the building and sites committee talked about an upcoming bond, marketing for the bond, and placing an agriculture building on the Roseburg High School campus.

The board agreed to put a bond measure on the ballot in May 2022, although it did not take an official vote on the matter.

“We need to ensure that the next bond measure passes,” board member Howard Johnson said. “We cannot push it further down the road, because our buildings and our facilities are falling further and further behind of what would be an acceptable standard for our students to be educated in.”

The next meeting is scheduled for 6 p.m. April 14 at the Roseburg High School Rose Theatre.

On the road again: Driver education resumes with plenty of coronavirus protections in place.

A bond measure for $1.27 per $1,000 of assessed property value — an estimated $94 million in total — on the May 2020 ballot failed by a narrow margin. Here's the Only Bottom Line Folks. It's only about What money they can get. Add the Raises they want to also hand themselves while sticking their proverbial heads in the sand. Also the Only " CANCEL CULTURE " Ive witnessed is Fake American Flags being Flown. America's Flag is NOT Black & Blue or doe's it have a huge eagle on it. That is the Biggest Disrespect to this country. Bastardizing Our Nation Flag.

The black and blue flags are to show support for law enforcement. We fly one proudly right beside our American flag.

Millions of us watched the January 6 capitol insurrection and saw people carrying thin blue line flags charging and attacking capitol police. We saw a police officer dragged to the ground and beaten with a flag pole with an American flag attached as the crowd shouted USA USA. You cannot call that patriotism or respect for police.

You may be sincere in your patriotism and support for police, but the defaced American flag has become a symbol of hypocrisy and violence by extremist groups.

What desecrating the flag looks like is what we saw at the Capitol on January 6. Lest we forget, so-called patriots, aka white supremacists, beat police with the flag of our country.

We can change the Mascot name to RHS HONKIES! Then get rid of or change every other offensive name in Douglas County, starting with the 'Umpqua' River!

How's that for Sarcasm?

When completed, the PC movement and the cancel culture will have eliminated every reference, mention, use, or display of common Native American terms...basically a genocide against Native Americans. The word Eskimo has fallen into disuse because the makers of the ice cream bar ESKIMO PIE dropped the word "Eskimo.' Soon, no one will know what an Eskimo is, pie or otherwise.

Exactly! Then they'll complain why there are only white people on packing and no black people or native americans. [whistling]

When completed? Movement? I do believe you enjoy perpetuating anything us against them. Tribal language, terms and names make it inherently impossible for any so-called genocide, which your misuse of the word deems it moot. For example the county seat of Coos County is Coquille, both Coos and Coquille are tribal names. The word Eskimo is only the name of an island in Alaska. The Inuit tribes council chose to replace the word Eskimo with Inuit as their tribal name. There are just as many tribal words used to indicate locations across the country as there are words of those who came across oceans to live here. Perhaps we should all embrace the CCC, the Cancel Complainers Culture "movement". At least until some can use their time to learn a little more about the first Americans. And I'm sure a brand name change won't stop you from enjoying your Edy's Pie.

And those powers that be don't allow complaining at all, no threat of death, just death.

Only " CANCEL CULTURE " Ive witnessed is Fake American Flags being Flown. America's Flag is NOT Black & Blue or doe's it have a huge eagle on it. That is the Biggest Disrespect to this country. Bastardizing Our Nation Flag.

I don't think the Blue Lives Matter flag is or ever has been represented as a substitute for our national flag.

It's just a flag. Like a boy scout flag. or a regimental flag. or any other kind of flag.