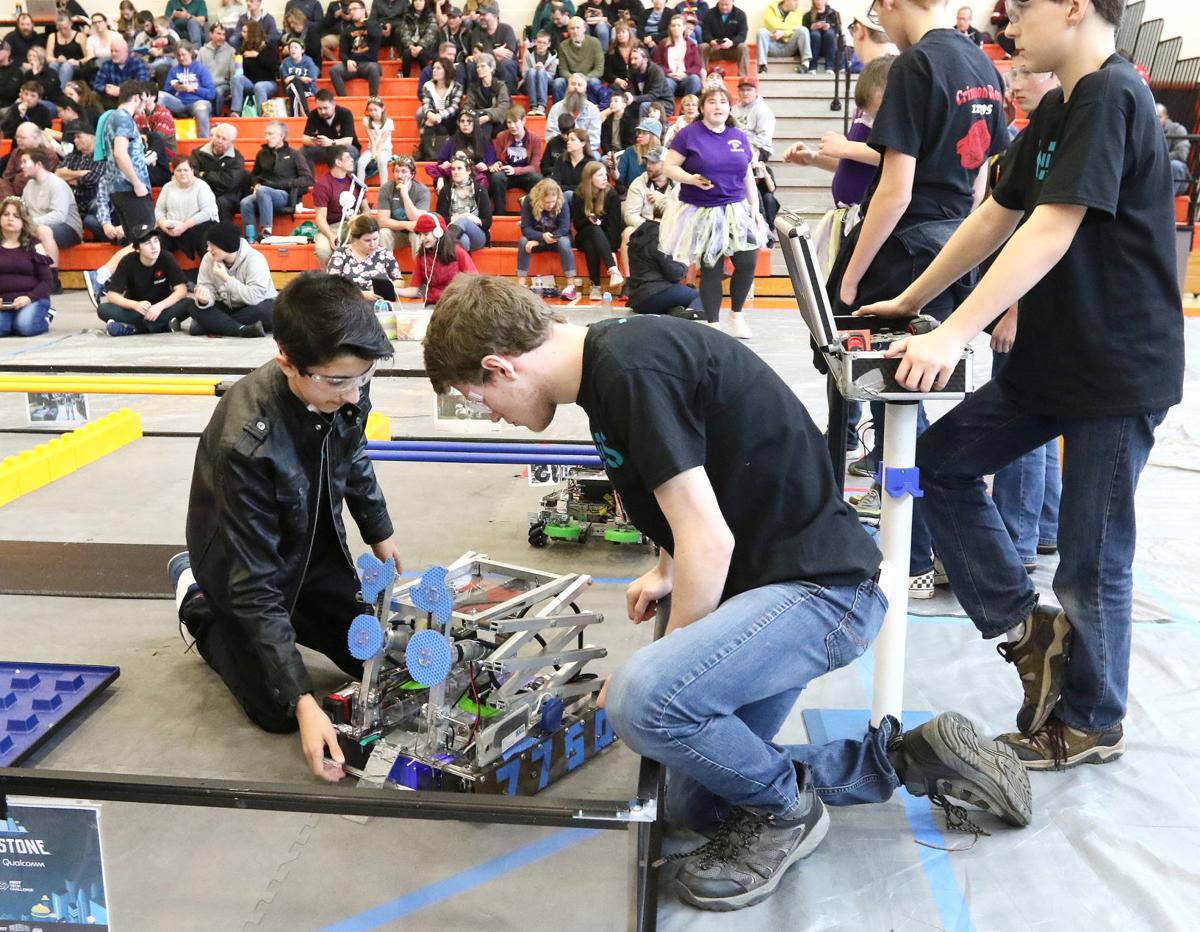 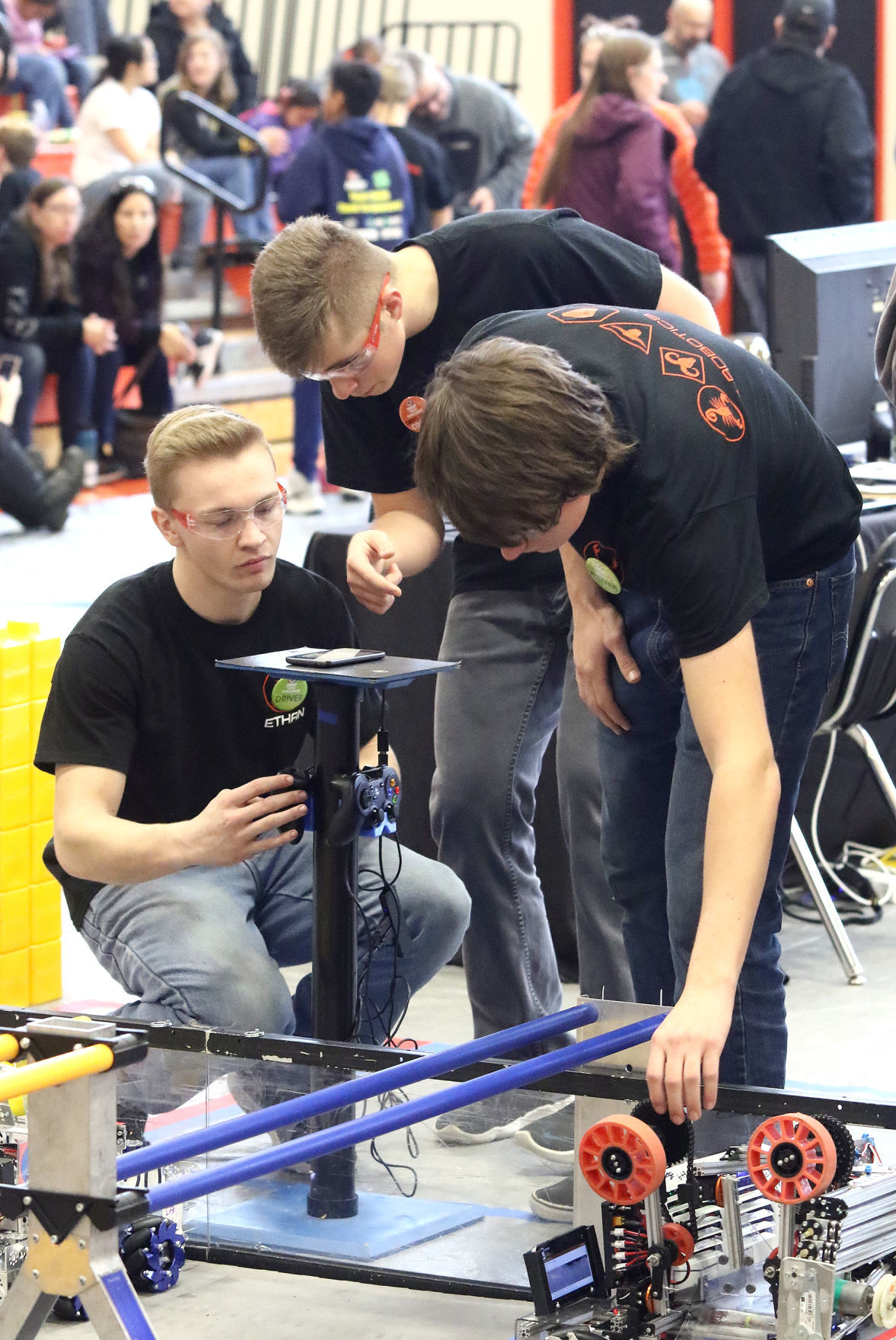 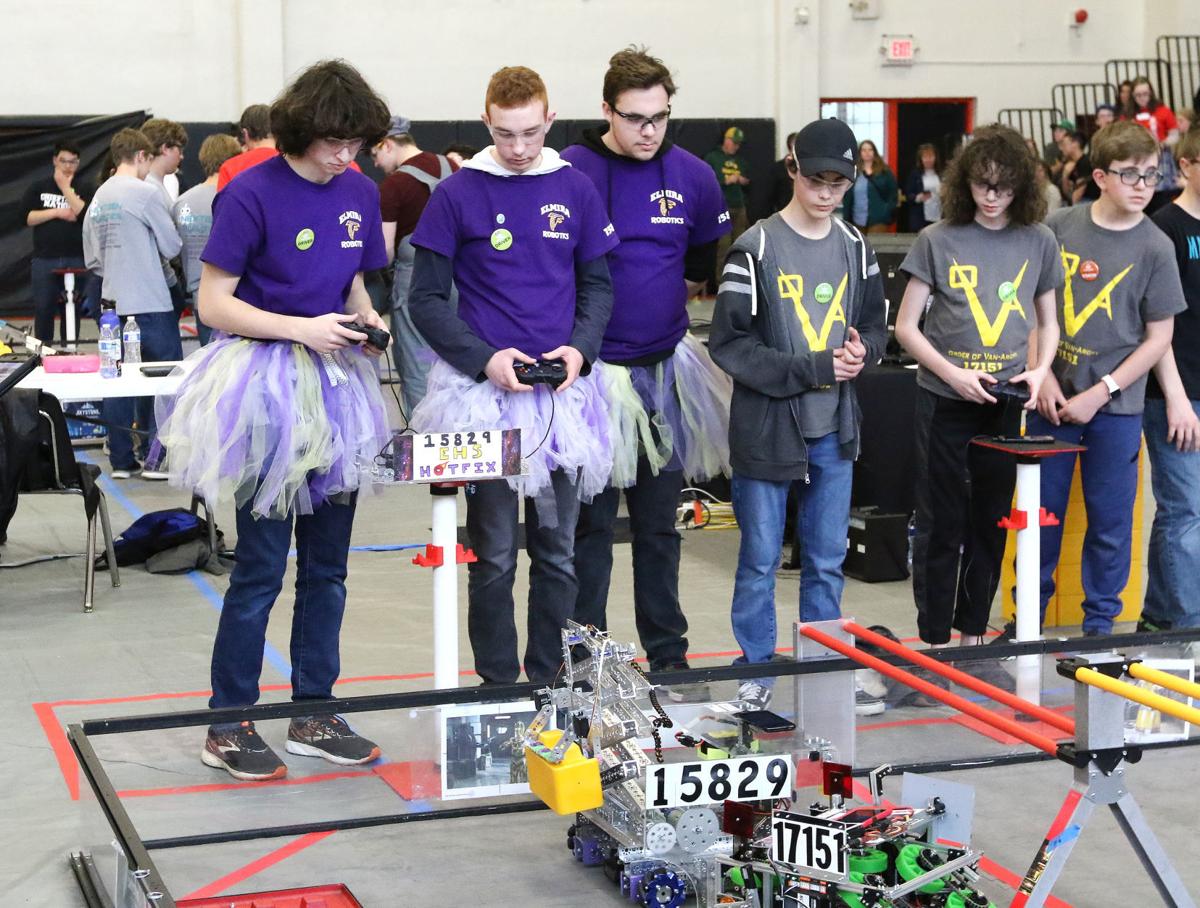 Teams control their robots during a competition at Roseburg High School on Saturday. 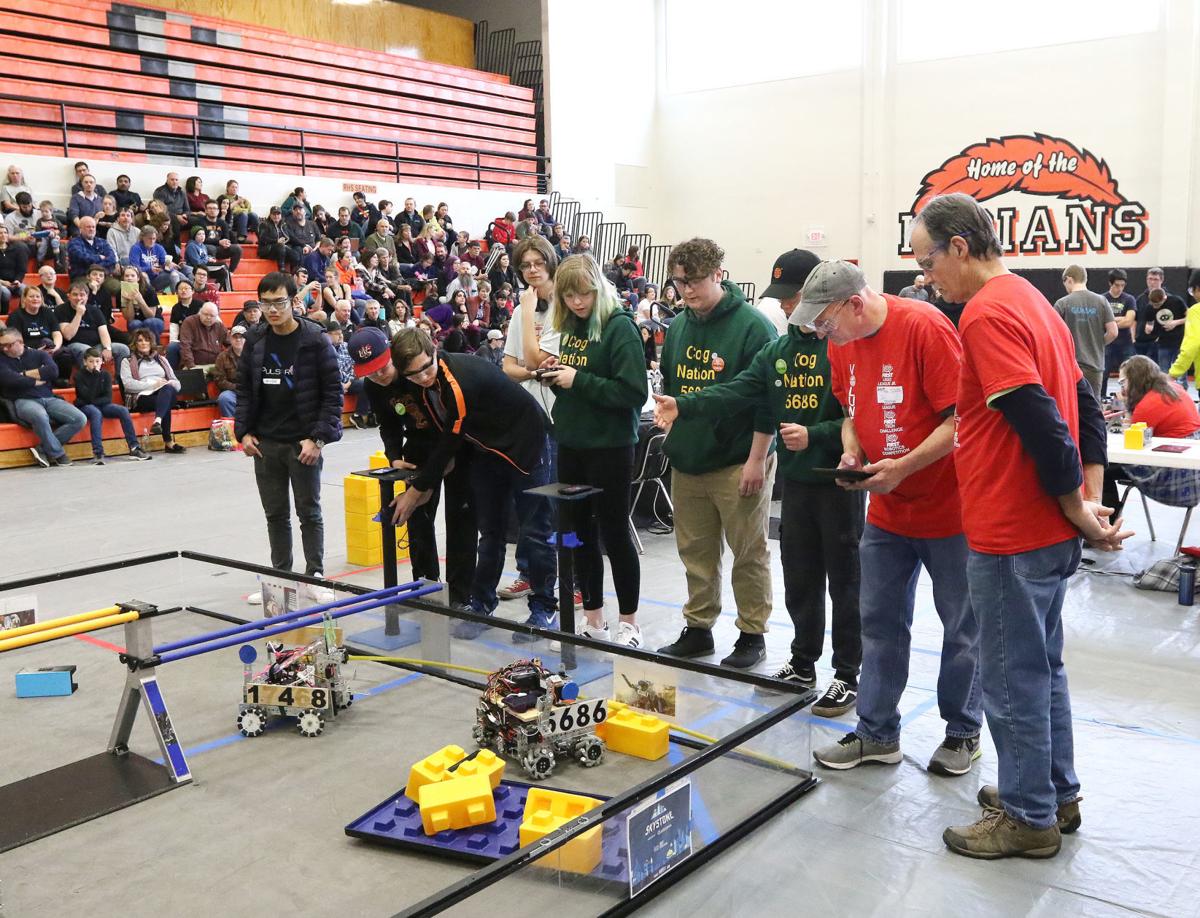 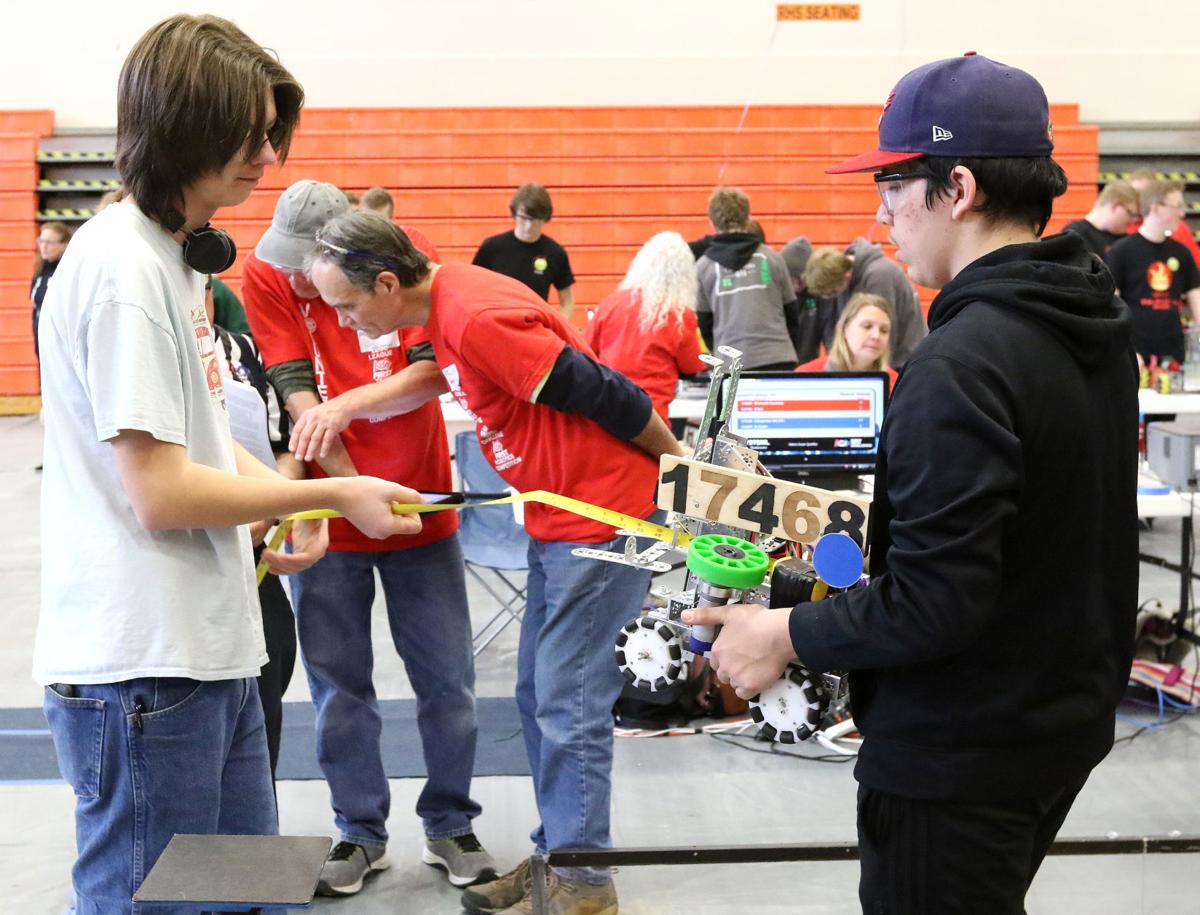 Sutherlin High School juniors Anthony Terry, left, and Luke Rethwill retrieve the robot for team Robot House after an event during a competition at Roseburg High School on Saturday. 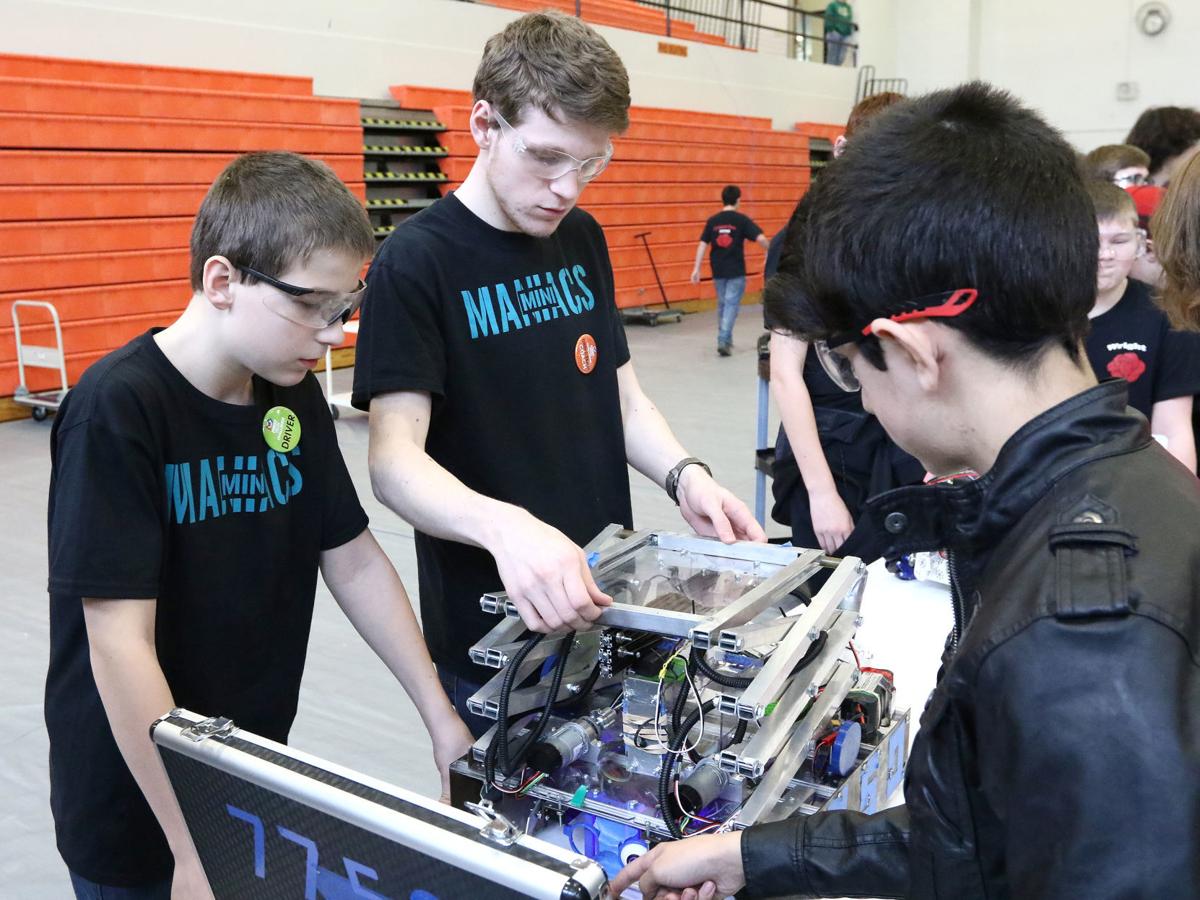 From left, Kane Koczler, Kohlton Koczler and Eli Malak set up the robot for team Mini Maniacs during a robotics competition at Roseburg High School on Saturday.

Teams control their robots during a competition at Roseburg High School on Saturday.

Sutherlin High School juniors Anthony Terry, left, and Luke Rethwill retrieve the robot for team Robot House after an event during a competition at Roseburg High School on Saturday.

From left, Kane Koczler, Kohlton Koczler and Eli Malak set up the robot for team Mini Maniacs during a robotics competition at Roseburg High School on Saturday.

The scene inside the Roseburg High School gymnasium was right out of a basketball game or wrestling match. About 300 fans were in the stands cheering on their teams while the announcer called the action and the referee made sure the rules were followed.

Except the announcer was wearing a black cape, some of the participants were in tutus and the main combatants were robots. Such was the scene Saturday afternoon as 30 robotics teams went head to head — wheel to wheel? — during the Oregon Super Qualifier Tournament.

Participants came from throughout the state, with the top nine teams advancing to the state championships. The competition initially began with more than 200 teams.

The contest involves two alliances of two robots each, which are programmed and controlled by team members. The robots operate within a 12-foot-by-12-foot enclosure, and the teams try and get their robots to stack large blocks on top of each other during a 2 ½ minute span. Points are given for various achievements (placing pieces on a foundation, navigation, etc.) and the team with the most points wins.

“They learn how to deal with failure because robots fail all the time,” she said.

The vast majority of the competitors Saturday, and at most events, are boys. Koontz, an engineer who is also involved with Southern Oregon Area Robotics, or SOAR, said she would like to see that change.

“I’m not sure there are enough female role models,” she said. “That’s one of the main reasons I wanted to get involved.”

But the competitions are not all about engineering feats and life lessons, Koontz said.

“We have fun. In fact, that’s a core value of this program — have fun,” she said.

Part of the competition took place before a single wheel was screwed onto a robot, as each team tried to come up with the coolest, most intimidating name. Some of those competing Saturday included the Order of Van-archy (Pacific Crest Middle School), Elixir (Thurston High School), Lethal Mechanics (Sutherlin High School), Rogue Mafia (Rogue River Jr/Sr. High School) and Scorpio (Roseburg High School).

Team member Ethan Yost explained that the school, located about 15 miles west of Eugene, is small, at about 300 students, and new to robotics. The tutus were meant to motivate EHS Hotfix and let other teams know they weren’t intimated, Yost said.

“Last year was our first year competing and we wanted people to know we were coming hard,” said the senior, who was recently accepted to BYU Provo, where he plans to study engineering.

“He’s an insane engineer, one of our best for sure,” teammate Jarrett Garner pitched in.

The person who appeared to be having the most fun of all? Not a competitor at all, actually, but event announcer Loridee Wetzel.

Dressed in a full-length black cape over a black t-shirt and black pants, Wetzel worked the crowd. She counted down “3,2,1, and here we go!” to kick off each match, then provided a running commentary of the robotic battles, to the cheers of the crowd.

“They needed someone to talk, and I don’t mind talking,” she said of her role as announcer.

The Oregon State Championships are scheduled for March 14-15 at at Liberty High School in Hillsboro. For more information on the competition go to https://www.firstinspires.org/robotics/ftc or https://ortop.org/ftc/ftc-home/.

Goin' on a Bear Hunt: Bears in the windows create a fun game for kids during a tough time

Goin' on a Bear Hunt: Bears in the windows create a fun game for kids during a tough time

Swanson Group laying off 300 workers in Glendale; others face pay cuts
Goin' on a Bear Hunt: Bears in the windows create a fun game for kids during a tough time

Commentary: Class of 2020 has the chance to rule
AP
Wiped out of toilet paper? Here's why
© Copyright 2020 nrtoday.com, 345 NE Winchester St. Roseburg, OR | Terms of Use | Privacy Policy
Powered by BLOX Content Management System from TownNews.com.