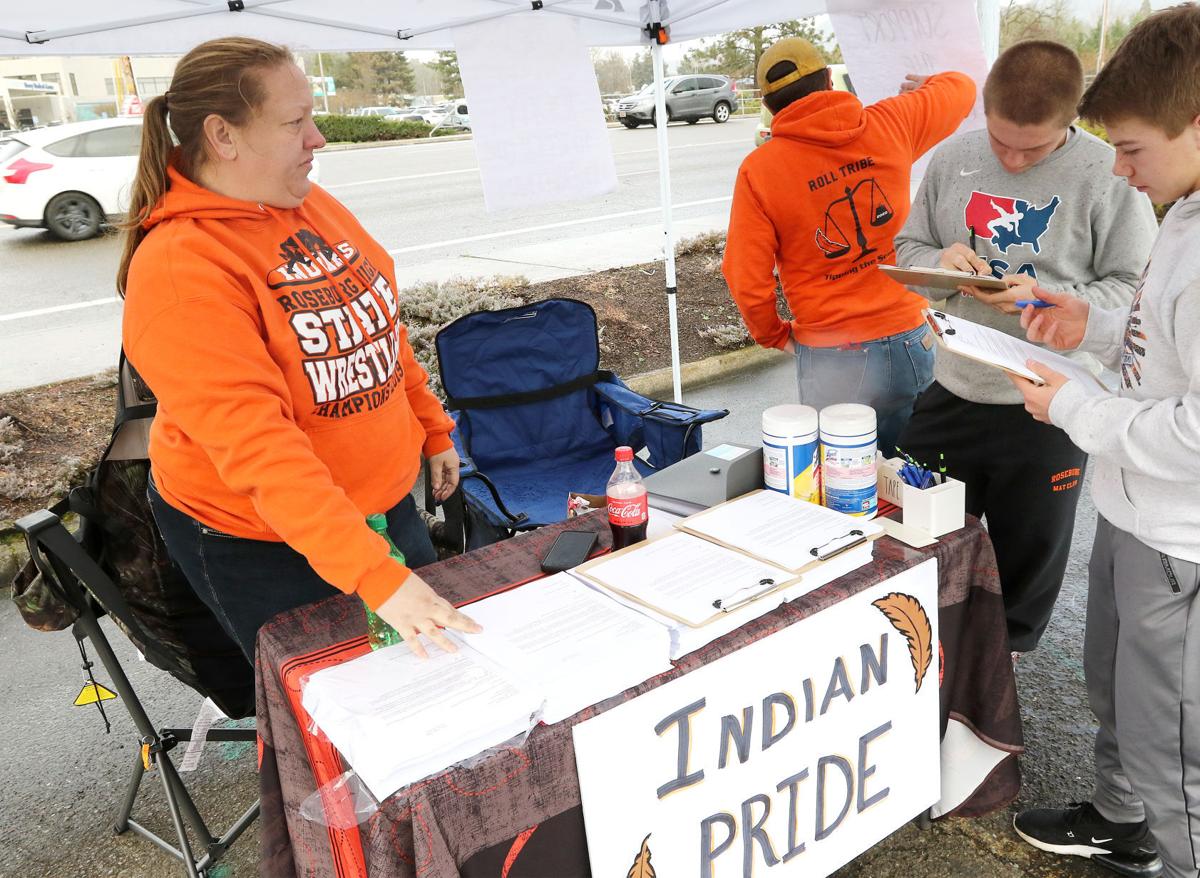 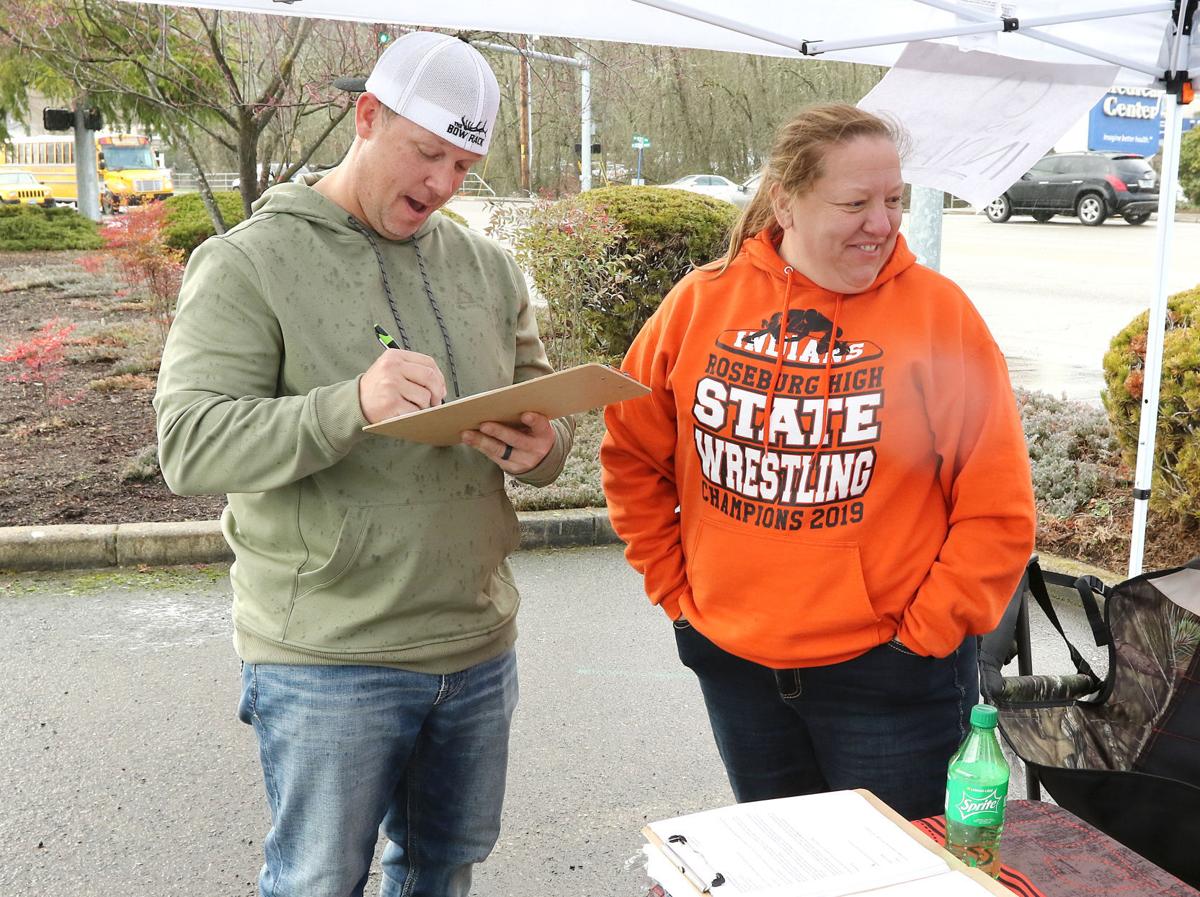 Jennifer Singleton of Glide looks on as Jeff Traviss of Roseburg signs a petition in favor of Roseburg High School retaining its current mascot Tuesday in Roseburg. 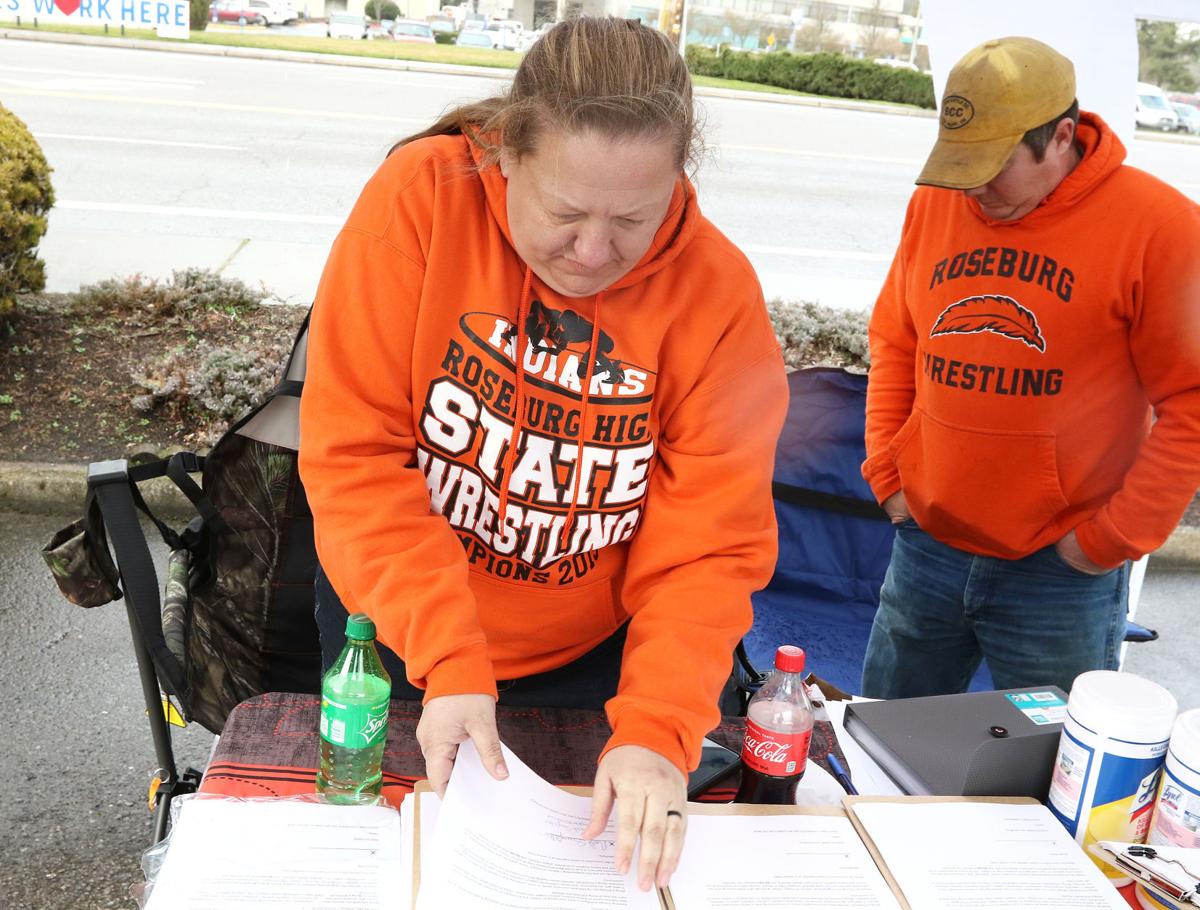 Jennifer Singleton of Glide collects signatures on a petition in favor of Roseburg High School retaining their current mascot, the Indians, Tuesday in Roseburg. 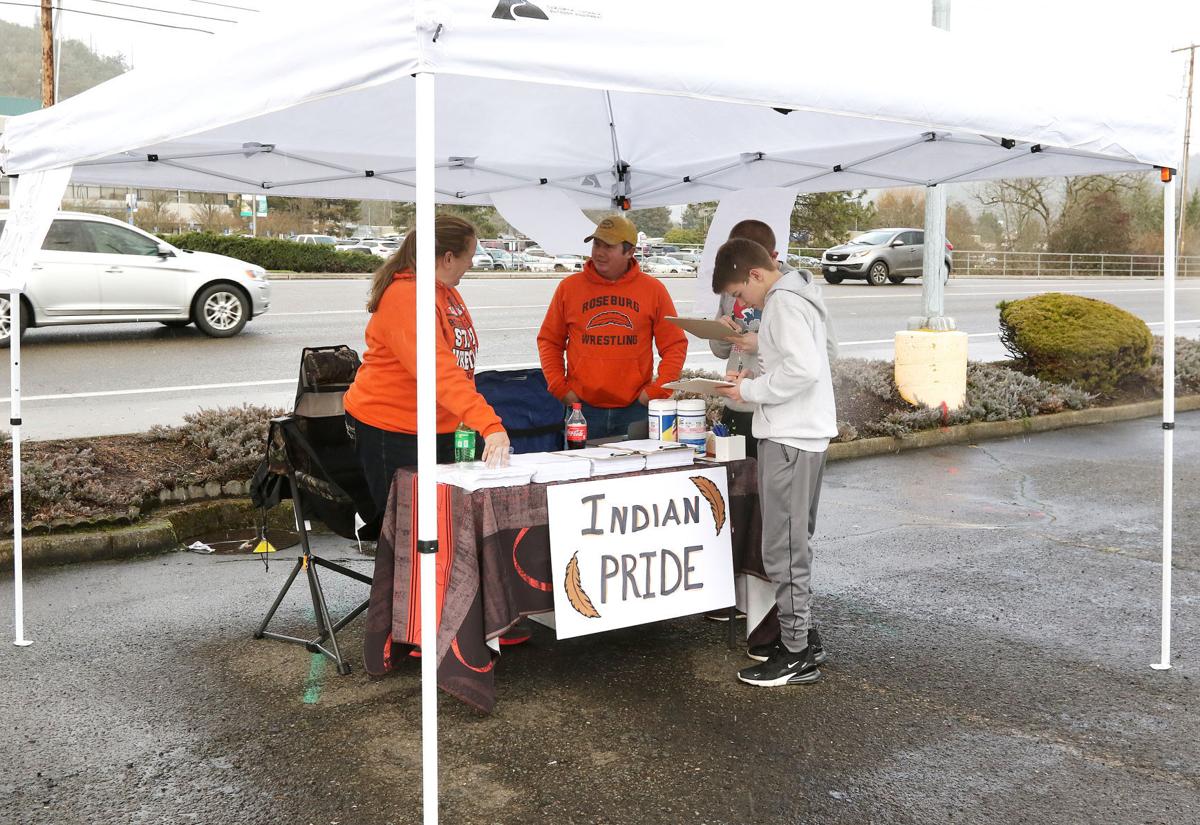 Jennifer Singleton of Glide looks on as Jeff Traviss of Roseburg signs a petition in favor of Roseburg High School retaining its current mascot Tuesday in Roseburg.

Jennifer Singleton of Glide collects signatures on a petition in favor of Roseburg High School retaining their current mascot, the Indians, Tuesday in Roseburg.

Around 3 p.m., she had about 100 letters from people who wanted to keep the mascot.

“Please do not end this longstanding tradition of respect, honor, gratitude, and understanding with our community partners of Cow Creek Band of Umpqua Tribe of Indians,” a pre-written letter of support said. “If local historical education of our current and future students is necessary, please educate, and do not eradicate the INDIANS.”

There were pre-written letters available, but some supporters took the time to write additional comments on the back.

“The community wants to keep the identity in relation to our community partners of the Cow Creek Band of Umpqua Tribe of Indians,” Provencal wrote in an email. “We collectively are a Tribe. They have always supported us and we support them.”

The Singletons live in Glide, but attend school in Roseburg and are proud to call themselves Indians. Nash Singleton, a Roseburg High School junior, signed a letter in support of keeping the mascot.

“We moved in to be Indians,” he said. “Since we were four of five years old we wanted to wrestle for Steve (Lander). The name has to do with who we are as a team. We wrestle for our tribe, we wrestle for the Indians.”

Jeff Traviss, a Roseburg High School alumnus, said, “I grew up with it. The tribe OK’d it. It’s been around for a long time.”

Traviss said he comes from a long line of Roseburg High School graduates.

The mascot came under fire again this summer when Roseburg High School alumnus Jessica Bascom started an online petition to remove the mascot due to its racist nature. That petition has gathered more than 6,000 signatures.

Bascom is an enrolled member of the Klamath Tribe who also has Creek and Cherokee heritage. She says she does not feel honored by the mascot in her petition.

The school board reached an agreement with the Cow Creek Band of Umpqua Tribe of Indians in 2017 to keep the mascot, with an agreement to review the contract every three years.

“There are over 500 federally recognized tribes and I don’t think the Cow Creek Band of Umpqua Tribe of Indians should have the final say in this important issue,” Bascom wrote in her petition. “Roseburg, you can do better. The time is now.”

Those in support of keeping the mascot thought the discussion had finished when the local tribe signed off on the name, but the school board decided to restart the discussion surrounding a possible retirement of the mascot.

The board of directors for Roseburg Public Schools asked the community to provide feedback on the possibility of retiring the mascot via an online form at www.roseburg.k12.or.us. The board also asked people to list their affiliation with the school, name and email address. People can also send a letter to the school board at 1419 NW Valley View Drive in Roseburg.

Superintendent Jared Cordon said the online feedback form, which opened Monday morning, had seen 212 responses by Monday night and as of 12:41 p.m. Tuesday the number of responses had grown to 339.

The online form and letters must be received by Feb. 22, as the school board will be discussing its results during the Feb. 24 regular meeting.

“I just want everyone to be heard,” Jennifer Singleton said. “All voices need to be heard.”

Provencal added that she wants community members, former students, current students and constituents to sign and promise to be positive representatives of Native America with the intent of prolonging the community’s cultural acceptance of the tribe.

“The term ‘Indian’ is federally recognized. There is not any ill disposition with the term, as a community, we have studied, sweat, bled, and cried to earn the title of Roseburg Indians,” Provencal wrote. “We merely want to be able to stand together in a unified community that honor our ancestors.”

Provencal said those in favor of keeping the mascot “see Native America as an identity. We share in the historic struggles and hope to best honor and bridge a continued relationship with our local tribal partners.”

She added that retiring the mascot would be “erasing history, eliminating a community cultural base and sadly the future of our children.”

Those in favor of keeping the mascot can continue to sign letters of support each day this week from noon to 5:30 p.m. in the old Kmart parking lot.

Provencal will be dropping the letters off at the school district before the Feb. 22 deadline.

Subcommittee to seek board approval for survey on Roseburg High mascot

As a graduate of Roseburg High School (1966) I supported and cheered my team by playing in the marching band and being an active participant in the life of the school. I would like to express my support for the indigenous people of the area by changing our mascot name. I am not worried my children will be hurt by such a move. As part of a school and community family that works for peace and kindness, it seems like a small price to pay to reach out to our neighbors.

Yet another socialist's attempt to eradicate the HISTORY of American in our schools. This is evil and totally disgusting keep history and the schools identity. Airborne

I heartily recommend Godfreys' earlier article, which discusses in more depth how insulting and damaging this mascot is: https://www.nrtoday.com/news/education/roseburg-high-school-grad-starts-petition-to-change-mascot-name/article_f0f9cd85-b719-5b2a-ab7a-7417d6437039.html

"Do not eradicate the INDIANS" is as perverse an inversion of the moral history of the cultural appropriation and debasement as could be imagined.

Eradication of Native Americans was the explicit and implicit policy goal of multiple generations of Europeans and Euro-Americans. To turn this word on its head in defense of a demeaning symbol is utterly, 1984-worthy, immoral.

These people have brought shame to our community--at just the moment that Dallas ("Filthy Traitors!") Heard was beginning to recede from the spotlight. (And, oh: years ago, Dallas Heard, in discussing the Tribe, alluded to how one deals with a "virus.")

Why am I not surprised that the troglodytes want to keep the racist name?

The local tribe refers to themselves as The Cow Creek Band of Umpqua Tribe of Indians. https://www.cowcreek-nsn.gov/ What are those poor troglodytes to do? They can't even get their own name right!

Do we deserve to continue to use this mascot name? There is no truth to Jennifer Singleton's comment regarding a "longstanding tradition of respect, honor, gratitude, and understanding with our community partners of Cow Creek Band of Umpqua Tribe of Indians,"

And Sony Provencal's statement, "Provencal added that she wants community members, former students, current students and constituents to sign and promise to be positive representatives of Native America with the intent of prolonging the community's cultural acceptance of the tribe." Sign and Promise? What does sign and promise mean to any Tribe native to American lands?

Anyone can and should go the Cow Creek website and read the history of exactly how the tribe was treated: https://www.cowcreek-nsn.gov/tribal-story/ -- White people don't have a positive history with the tribe. It's more the typical, we're going to lie to you, get you to sign a treaty we have no intention of honoring, desecrate your land and survival, and threaten you into compliance.

The statements of Ms. Singleton and Sony Provencal don't ring true. The school could easily adopt a more appropriate mascot name if they can find one that doesn't describe our despicable history with any Tribe.

I think that there are lots of options we have here... I don’t think we should keep the ‘Indian’ name but instead name our high school after a prominent leader of the local tribe (much like they do with Martin Luther King jr and George Washington). If we don’t change the mascot we should learn more in depth every year about the Native Americans in our community, their past, and present. We could have leaders of the tribe make videos educating us on topics and even put up pictures of prominent figures from the tribe (new and old) in the heritage. Along with the pictures in the heritage could be information about the tribe. All the things above (other then the name change) should’ve already been done if they really wanted to honor our local tribe. As a student at the high school I find the opposers very closed minded and bigoted towards change in our community, and not open to alternatives like I just listed. Things have to change and they’re going to have to accept it.

I went to an historic high school that had to change the name of its teams and mascot. The team name, which had been innocent enough in earlier decades, had become a slang term for the sex act and male anatomy. The name was changed. People wailed. It was going to destroy our identities. We survived. Within a couple years nobody really seemed to care. You are much greater than your team name. It will be okay.