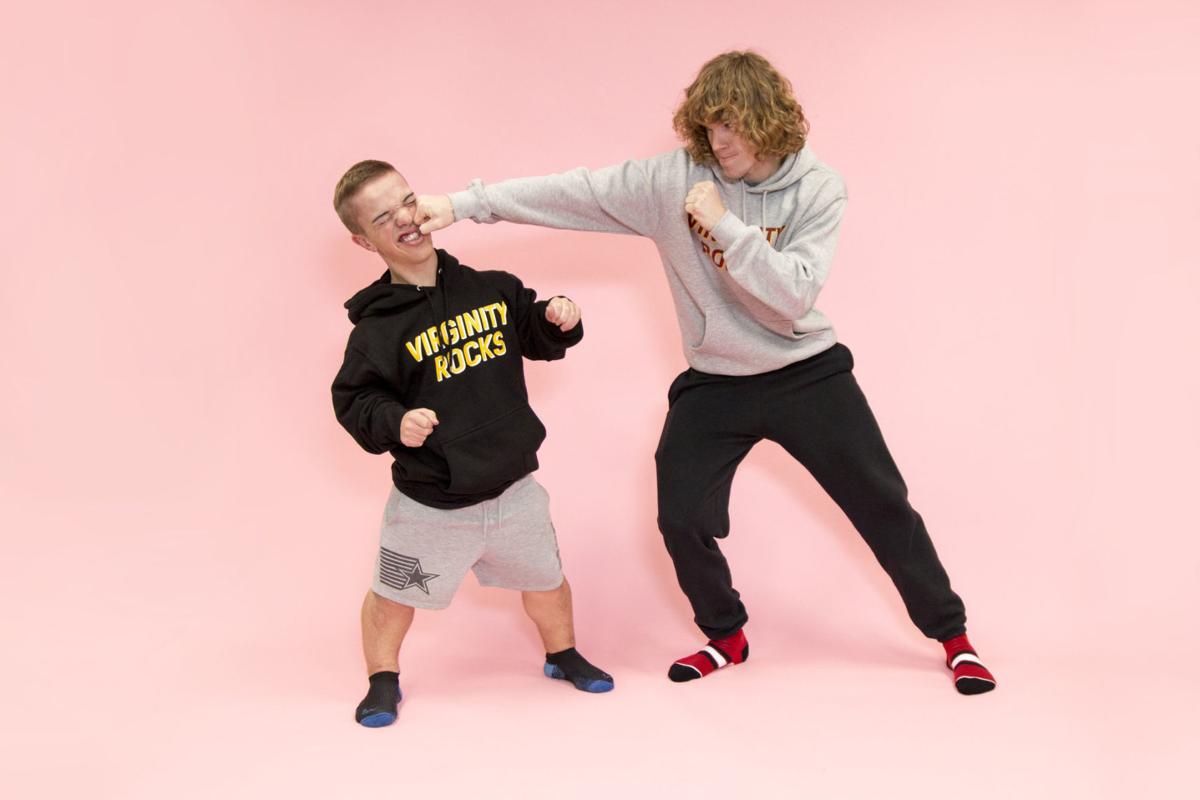 In a photo from Danny Duncan’s website, the YouTube comedian, right, clowns around with a coworker wearing a “Virginity Rocks” hoodie. On Monday, Roseburg High School student Fletcher Case was told he could not wear a similar “Virginity Rocks” T-shirt to school. 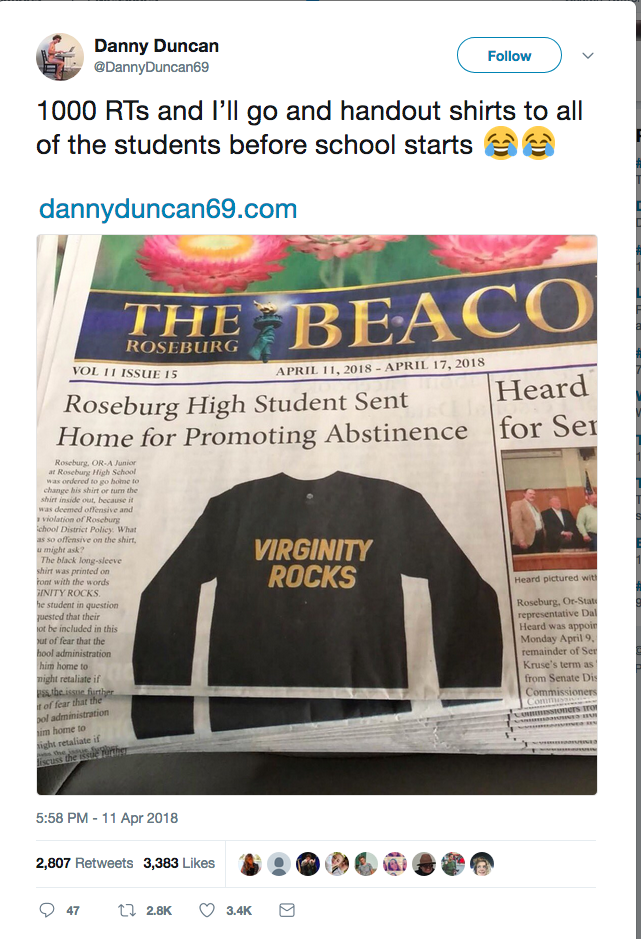 YouTube comedian Danny Duncan tweeted he might visit Roseburg to hand out the “Virginity Rocks” T-shirts that Roseburg High School required one of its students to change out of on Monday. His announcement came after he saw a photo of The Roseburg Beacon’s story on the incident.

In a photo from Danny Duncan’s website, the YouTube comedian, right, clowns around with a coworker wearing a “Virginity Rocks” hoodie. On Monday, Roseburg High School student Fletcher Case was told he could not wear a similar “Virginity Rocks” T-shirt to school.

YouTube comedian Danny Duncan tweeted he might visit Roseburg to hand out the “Virginity Rocks” T-shirts that Roseburg High School required one of its students to change out of on Monday. His announcement came after he saw a photo of The Roseburg Beacon’s story on the incident.

A Roseburg High School student went home to change Monday after the principal told him he couldn’t wear a “Virginity Rocks” T-shirt at school.

Since then, the issue has blown up into a social media phenomenon.

Fletcher Case, 17, wore the shirt because he thought it was funny, his grandmother Linda Jacobson said, but it also had a good message.

The shirt was purchased from YouTube comedian Danny Duncan, a favorite of Case’s. He’s often worn another Danny Duncan shirt, which says “¿Donde Esta La Leche?” to school without incident, Jacobson said. In fact, that’s the shirt he changed into when he went home on Monday.

Duncan has a YouTube video ”¿Donde Esta La Leche?” in which he visits a farm, rides a pony and makes lewd comments while milking a goat.

Jacobson complained about the school’s decision on her Facebook page. Then, after The Roseburg Beacon published an article about it, Case sent a photo of the article to Duncan. Duncan posted it on his Twitter page and said if it was retweeted 1,000 times he would visit Roseburg and hand out shirts to all the students before school starts. As of Friday morning, it had been retweeted 2,805 times.

The News-Review sent a message to Duncan to see if he plans to make good on the promise, but did not get a response.

The school referred questions about the incident to Roseburg School District Superintendent Gerry Washburn, who said wearing the T-shirt would have been disruptive in class.

Washburn said students generally have free speech rights, but they don’t extend to topics that could cause disruption. He said the only appropriate place on campus for conversations about reproduction is in health class.

Jacobson noted her grandson was wearing a cross under his shirt. She said there’s nothing wrong with the “Virginity Rocks” message.

“We would have made the same decision if the student had been wearing a T-shirt that said sex rocks or smoke more pot,” he said.

Jacobson said Case discussed the shirt with a couple of teachers before wearing it to school, and that they thought it would be OK. She said Case initiated the conversation with RHS Principal Jill Weber about whether it would be alright to wear the shirt. Washburn said administrators noticed the shirt while greeting kids first thing in the morning and told Case they needed to talk about it.

Washburn said his research indicated that Duncan isn’t promoting Christian values. Instead, he said, he’s making fun of people who are abstinent.

Initially, similar shirts were promoting Christian values, but through social media they morphed into a promotion of the opposite.

“It became clear to us that this was more of a jest than anything else,” Washburn said.

Jacobson believes there would have been no disruption if her grandson had been allowed to wear the shirt.

“He wore it to be funny, but he didn’t wear it to be disruptive,” she said.

She said many shirts students wear would offend her, including statements supporting gay rights. And her grandson, who she describes as a true patriot, has worn an NRA shirt and other potentially controversial clothing without incident.

She doesn’t see why the school didn’t just take the “Virginity Rocks” statement at face value.

“If you’re another parent or an adult walking down the street, and you see a kid wearing a shirt that says ‘Virginity Rocks,’ you don’t automatically say oh my God that’s that crazy freak Danny Duncan, who poses in weird stupid pictures and does trashy stuff. You look at that and say that’s a fun kid. That was how I took it as the grandma,” she said.

Jacobson said she’s been getting a lot of positive responses since she posted about the issue on Facebook. One of her friends said her son has worn the shirt at another Oregon high school and gotten high fives from his teachers.

The school’s efforts to avoid disruption may end up backfiring.

“It’s causing way more distraction than the stupid T-shirt would have in the first place,” Jacobson said.

Jacobson thinks Duncan will probably show up and hand out the T-shirts.

“If this guy does come to town, that’s going to be the story,” she said. “It’s kind of crazy how something that should have been so uneventful as a T-shirt turned into this whole thing.”

YouTube personality Danny Duncan told The News-Review he definitely plans to visit Roseburg to hand out his “Virginity Rocks” T-shirts.

I believe teachers should take students virginity so they will not have to worry about losing it in the future. (a.k.a Mr. Greenhouse taking little timmys virginity in his closet.

Teachers hate virginity, which is why they take it from their students.

I believe that also

Instead of focusing on a t-shirt, I suggest that Roseburg High School focus on student security.

Amen!!! As a RHS student, I feel unsafe going to school with all these kids who have behavior issues and threaten to shoot up the school! We keep having threats. The students these days are totally out of control.

In total agreement, you couldn't have said it better. The shirt has a positive message to most, Admin needs to focus on campus security.

Yeah well, there's entirely to many kids having kids in Douglas county, I think it sends a good message, regardless if that was his intent or not. Don't these educators have more important things to be focusing on??

Educators wanna teach students about the importance of their virginity instead of worrying about guns.

I would just like to quote Eric Cartman from Southpark. "Respect my authority" or is that also considered in bad taste by the school district?

roseburg high is against virginity

thats why teachers take it away from them