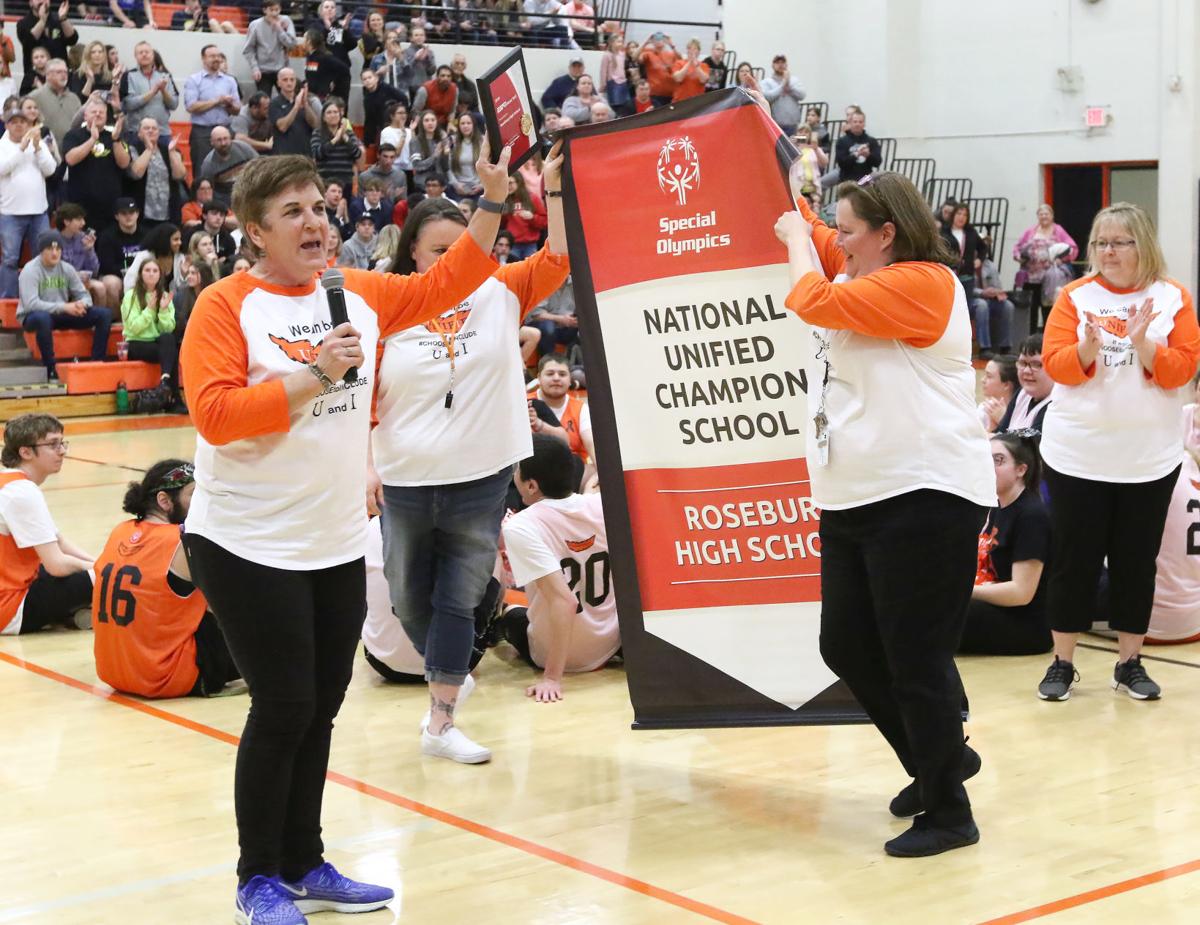 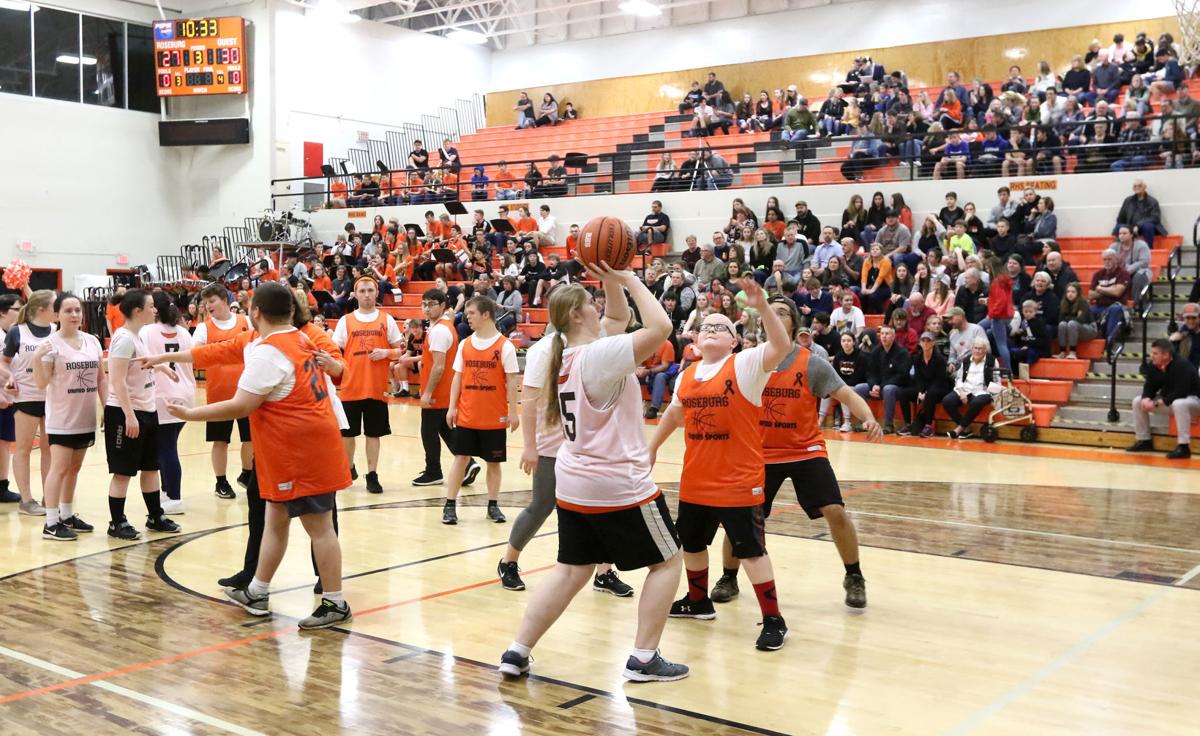 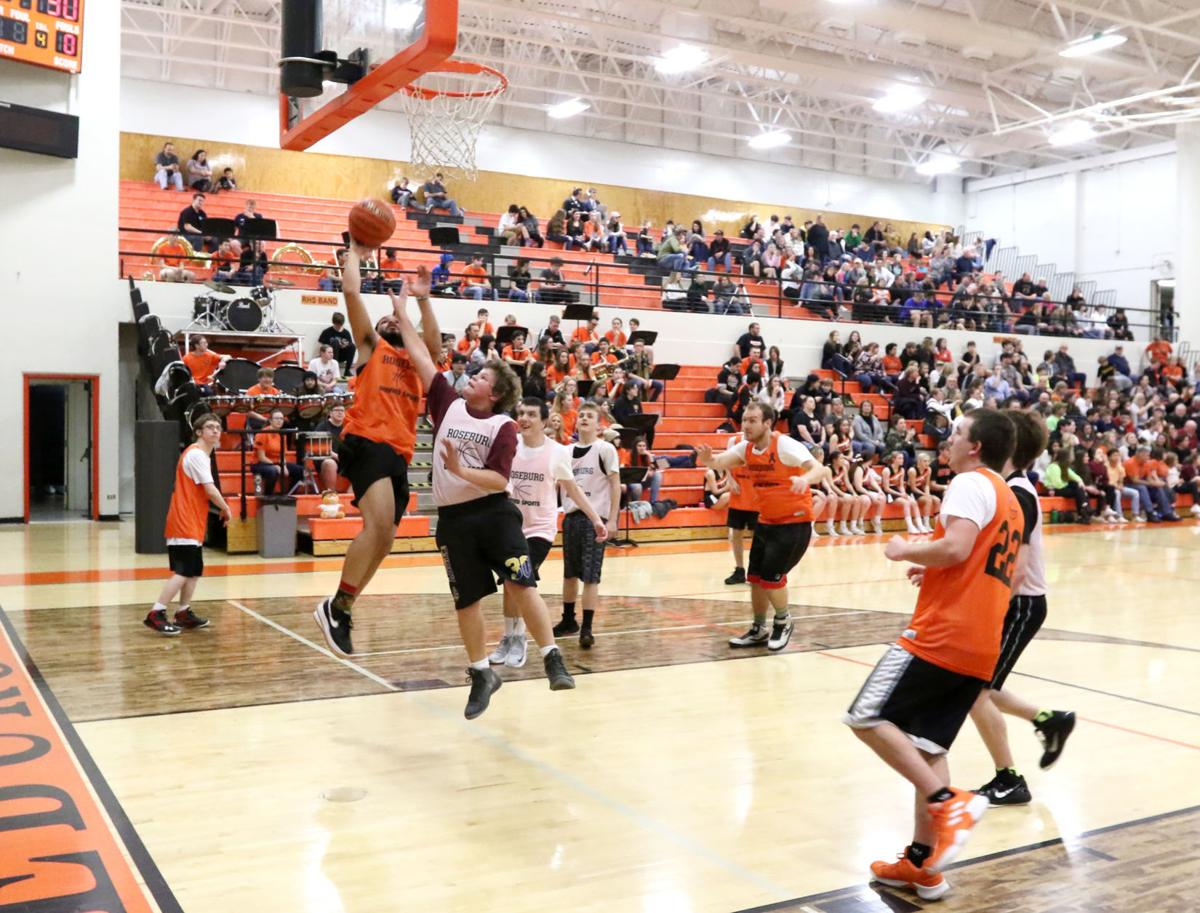 Special education and general education students shared the court for a showing of their basketball and cheer skills as part of a ceremony that honored Roseburg’s Unified teams, which received National School Recognition from Special Olympics.

“The student ovation was for the students,” said Partners Club co-adviser Fawn Shilts.

Roseburg High School’s Unified Sports Program, which is made up of students with disabilities and those without, has four teams — three skill-based basketball teams and a cheer team.

Cheerleaders stood on the half-court line, dancing and cheering to the sounds provided by the Roseburg High School band.

Following the demonstration by the players and partners, a representative from Special Olympics Oregon presented Roseburg High School’s Unified Sports program with a banner for national school recognition.

Special Olympics Oregon Vice President Jean Hansen said Roseburg High School went “above and beyond” when it came to including special education students in sports as well as in the classroom and other activities at the school.

“This is the first time we’ve presented a banner at a community event like this,” Hansen said. “Coming up with events like this is the reason they received national recognition.”

National recognition is earned by demonstrating commitment to inclusion by meeting standards and its inclusive school climate, sense of collaboration, engagement and respect for all members. The program earned state recognition last year.

“We are so proud of the work the Unified Sports program has done to make our school feel inclusive and supportive of all students,” Roseburg High School Principal Jill Weber said in a press release.

In addition to being recognized by Special Olympics, the school was also one of 30 high schools chosen for the ESPN Honor Roll.

“It’s been really great,” Wiley Mallick said about being on the team.

Mallick had been a team manager for football and track and field, but joining the Unified basketball team was the first time he got the chance to be an athlete among his peers.

His mom, Danielle Simpson, said she cried while watching her son and his friends were getting a standing ovation from the crowd.

“There’s something about watching them all play together,” Simpson said. “I literally cried. Just to see the community come together and celebrate being different and accepting them.”

Partner Clara Kempton, a junior, said she remembers Mallick as a manager for the middle school track and field team, but is glad to share the court with him now.

When asked what her favorite part of playing unified basketball was, she said, “Watching everyone smile.”

For sophomore Samantha Buller it’s been the norm. “I’ve been involved for my whole life,” the daughter of Arwyn Buller said, adding that it was great to see her mom’s work receive the national recognition.

Arwyn Buller was the president of the Partners Club when she attended Roseburg High School and when she returned as a staff member in 2011, one of the first things she did was reach out to Shilts and asked her how she could help.

“You can tell the school cares,” Arwyn Buller said. “They’re very intentional about finding other ways to also be inclusive.”

Shilts said it’s been a culture change at Roseburg High School and that perhaps the Unified sports teams started that change.