Free
Get Started
You are the owner of this article.
Edit Article Add New Article
You have permission to edit this article.
Edit
Welcome, Guest
N-R
NEWS
Coronavirus
SPORTS
OPINION
LIFE
ENTERTAINMENT
BUSINESS
OBITS
CLASSIFIEDS
1 of 5 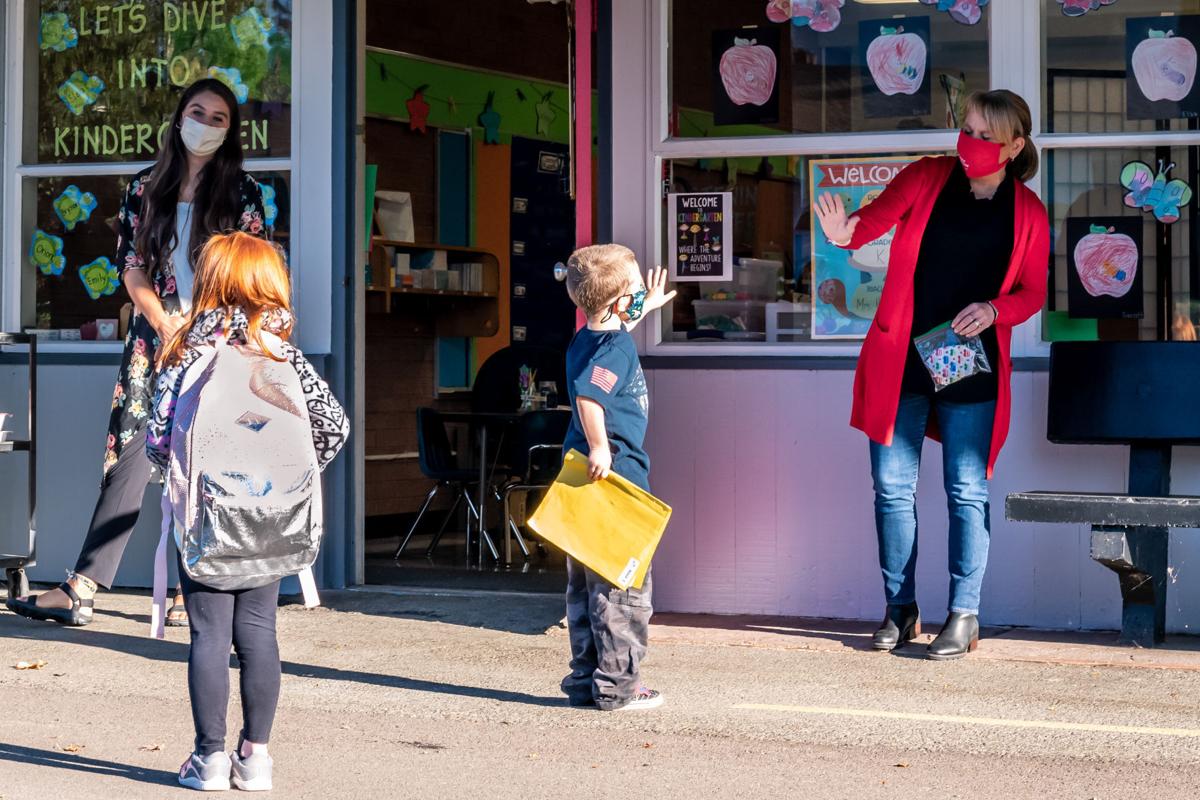 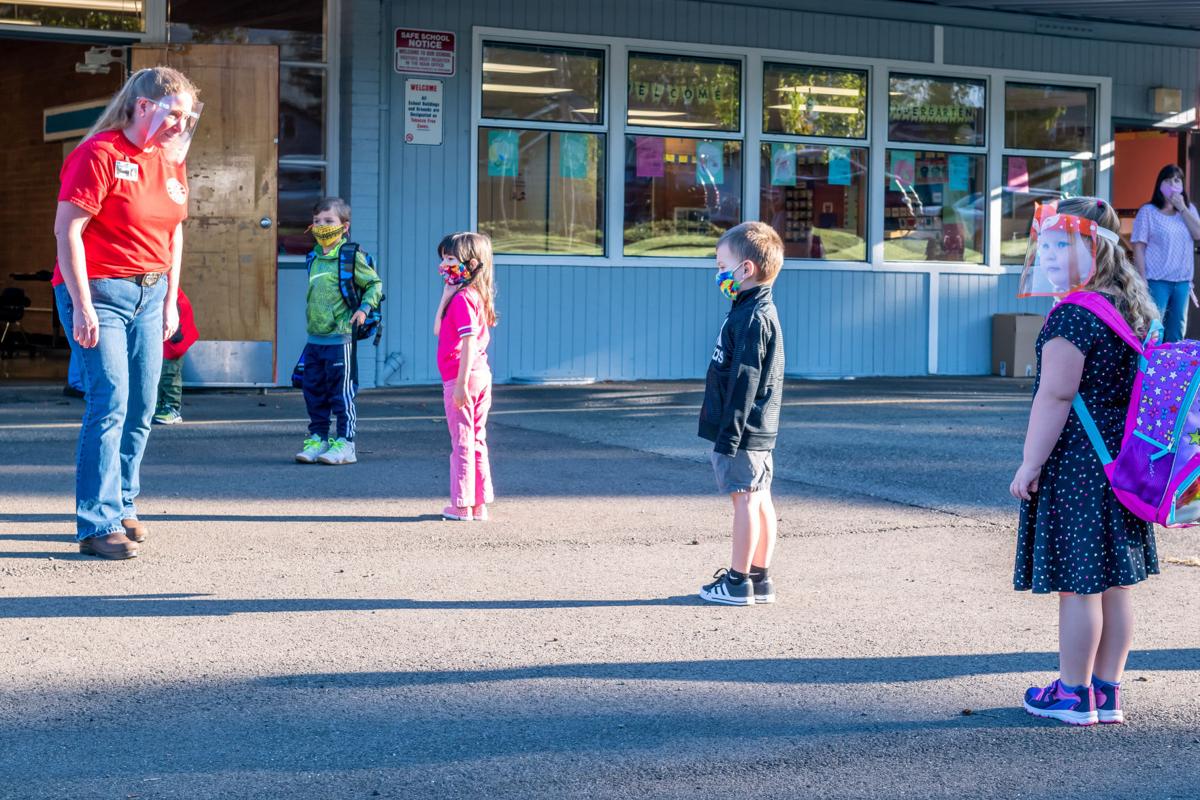 Kindergartners at Fullerton IV Elementary School started school in person on Sept. 21. They all wore masks and were asked to socially distance to help curb the spread of the coronavirus. 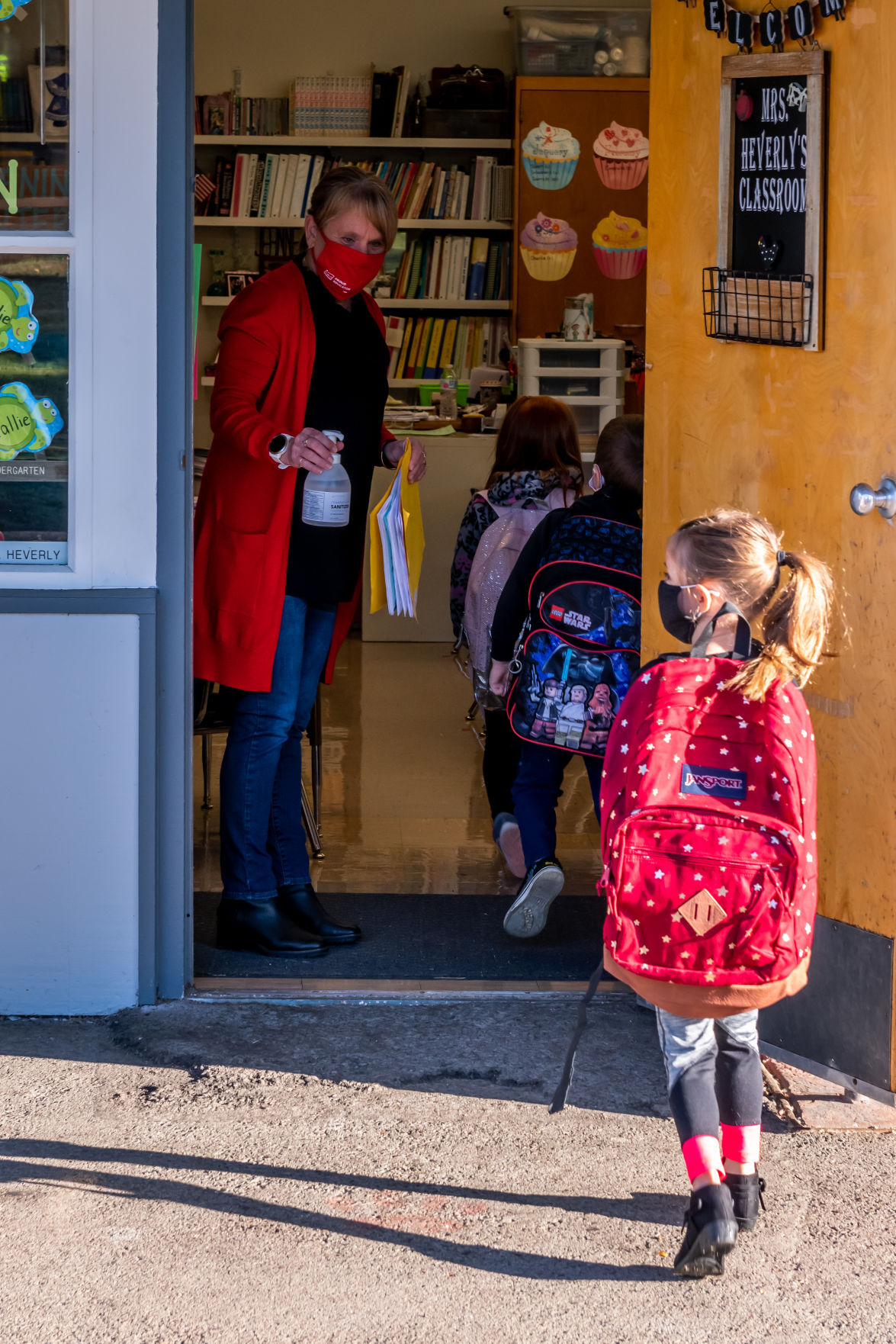 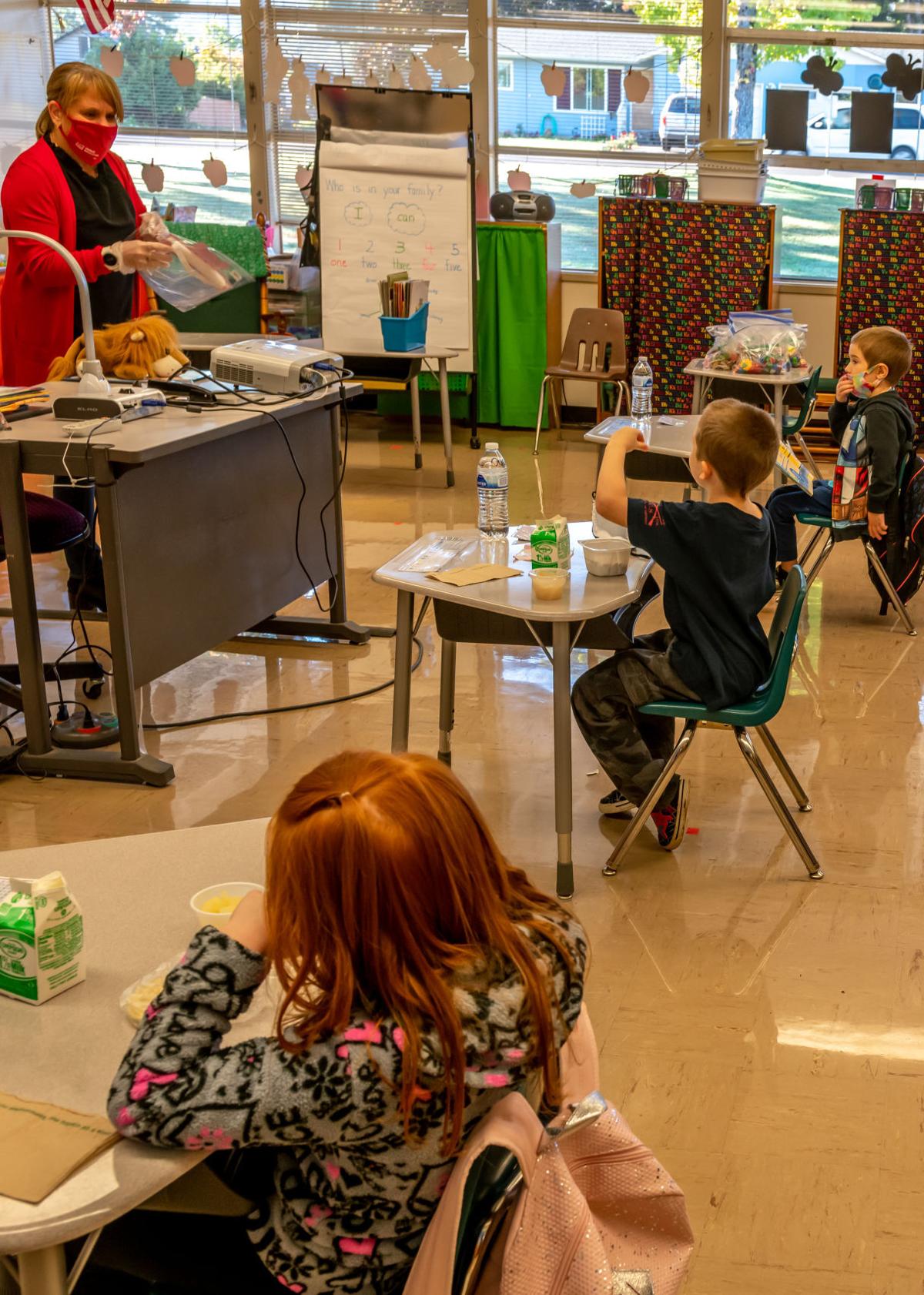 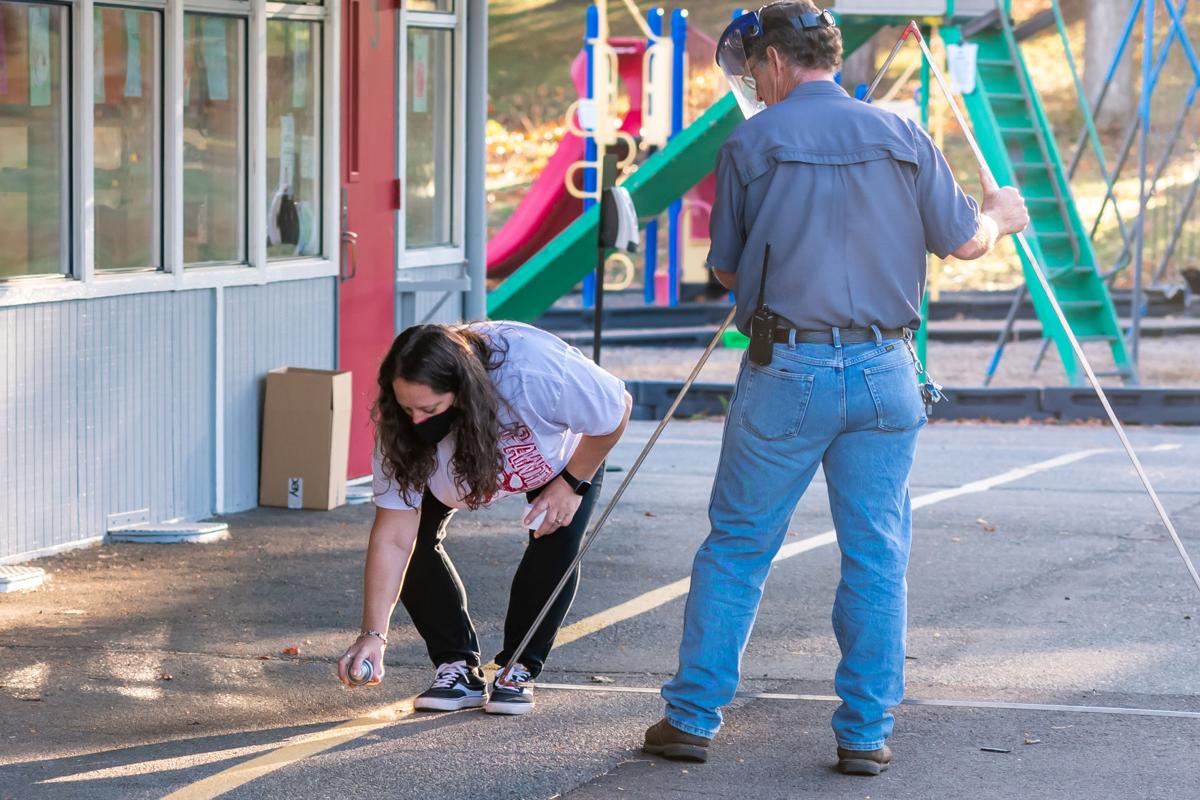 Kindergartners at Fullerton IV Elementary School started school in person on Sept. 21. They all wore masks and were asked to socially distance to help curb the spread of the coronavirus.

Kindergarten got off to a good start at Fullerton IV Elementary School on Monday, according to Principal Katrina Hanson.

“It’s amazing. It’s great to see them every year,” she said in a phone interview Monday afternoon. “There’s so much joy and curiosity and it was fantastic to see.”

Monday was the first day that kindergartners in the Roseburg school district set foot in a classroom. They had been participating in distance learning since the beginning of the school year.

“Through our Zoom meetings they’ve already gotten to see us,” kindergarten teacher Heidi Heverly said. “They know our faces, the know all three kinder-teachers. I think that really allowed for them to feel more comfortable. There have been years where I’ve had kiddos who cried or didn’t want to come into the room, and we didn’t have any of that. They all came in, eager and ready to go.”

These first days are shorter than regular school days, but still gave students the opportunity to get used to going to school.

Students ate breakfast at school, had recess, lunch in the cafeteria, language arts, crafts and all the other things they would normally do in school.

Parents of the kindergartners were able to say goodbye from the stairs at the school, but no visitors are allowed inside the building.

“It is such an important milestone for our families and watching your kindergartner walk through that door, it’s kind of a big deal,” Hanson said. “They were champs, everybody was happy and positive. It was good.”

Heverly said she was a little worried about the start of the day, but she quickly realized she had nothing to worry about.

“Kiddos came in by themselves and I was really worried about that,” Heverly said. “I thought ‘Oh, how’s that going to go,’ but they did a wonderful job. I think a lot of that is because we have been Zoom-ing with them.”

Students from first through third grade are scheduled to start school next Monday.

Heverly and Hanson both said that when those students return it may be a steeper learning curve to adhere to the new COVID-19 guidelines, because the kindergartners don’t know things were done in schools before coronavirus.

“I noticed in the lunchroom they had to sit 6 feet apart and I think at any other grade level that’s going to feel strange or different, but for these kinders that was their first time ever sitting in the lunchroom so they didn’t know any different,” Heverly said.

If the county meets the health metrics to reopen, fourth and fifth graders are scheduled to return to full-time,on-site instruction on Nov. 2 in Roseburg Public Schools. At that time, sixth through 12th grade would start with hybrid learning.

To start school on site for kindergarten through third grade, there can be no more than 30 COVID-19 cases per 100,000 people. However, for all students to return to in-person learning in Roseburg there can be no more than 10 cases per 100,000 people and the test positivity percentage will have to be at or below 5% at both the county and state level for seven day periods over three weeks.

Douglas County is not currently meeting the state standards to start schools for all grades. Some school districts in Douglas County opened to all students when those metrics were met and can remain open as long as there are no more than 30 cases per 100,000 people.

This article has been updates to correct the first name of  Fullerton IV Elementary Principal Katrina Hanson. A previous version of the article erroneously had her name as Kristina Hanson in a photo caption.