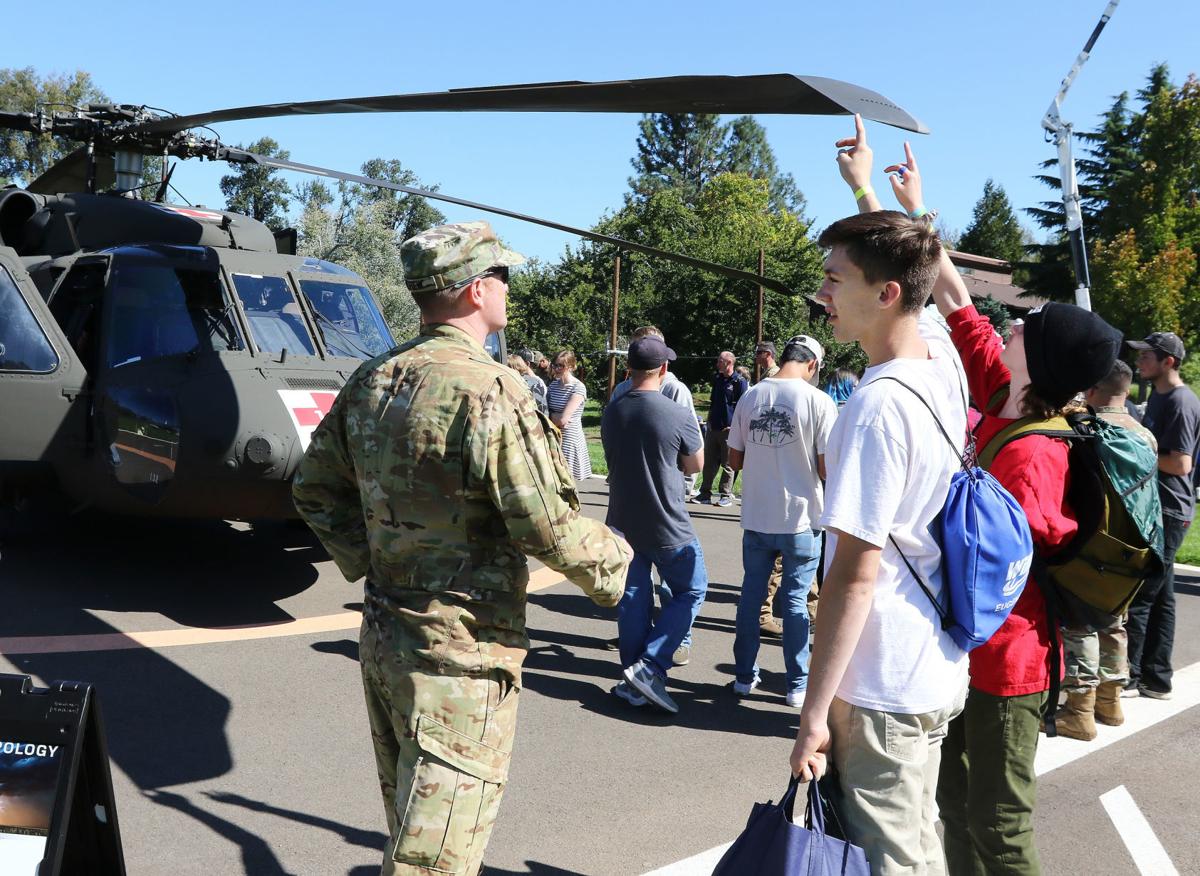 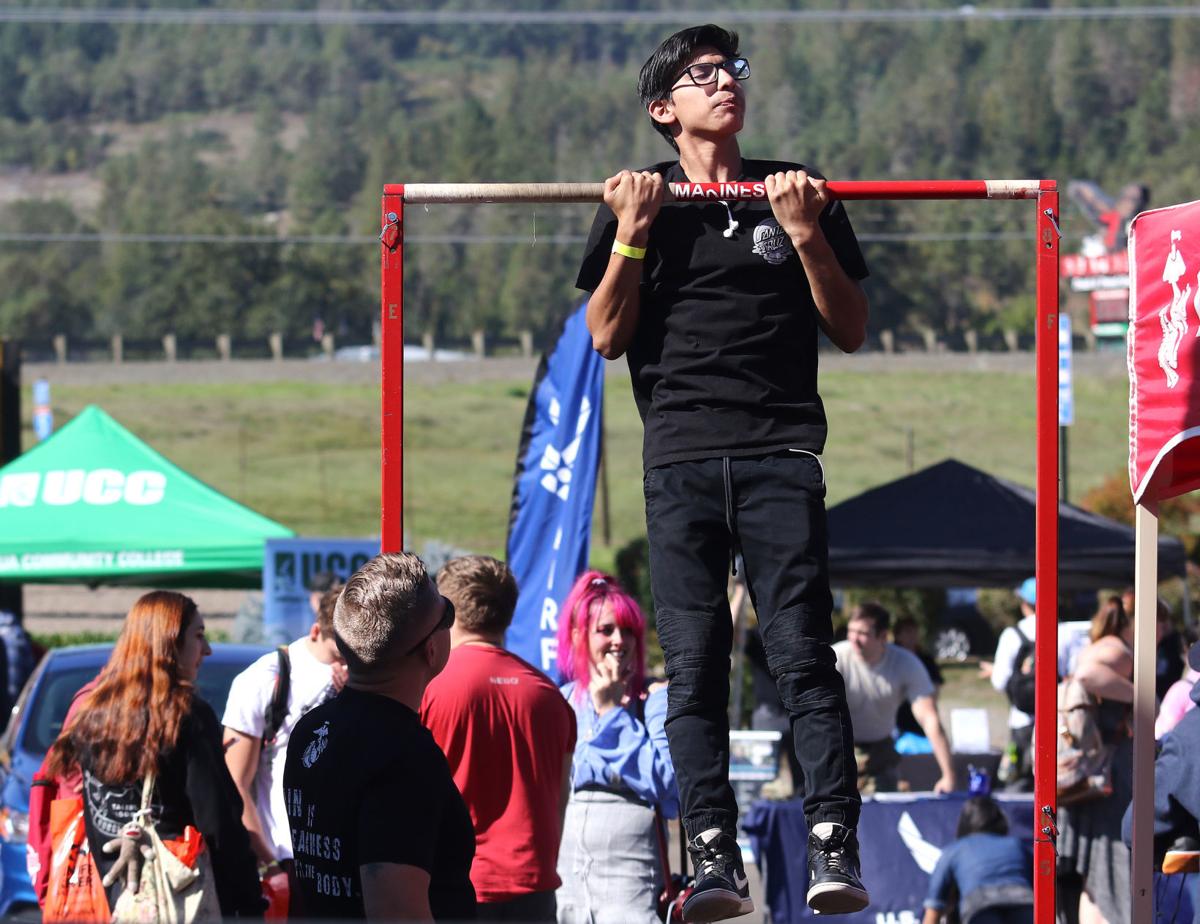 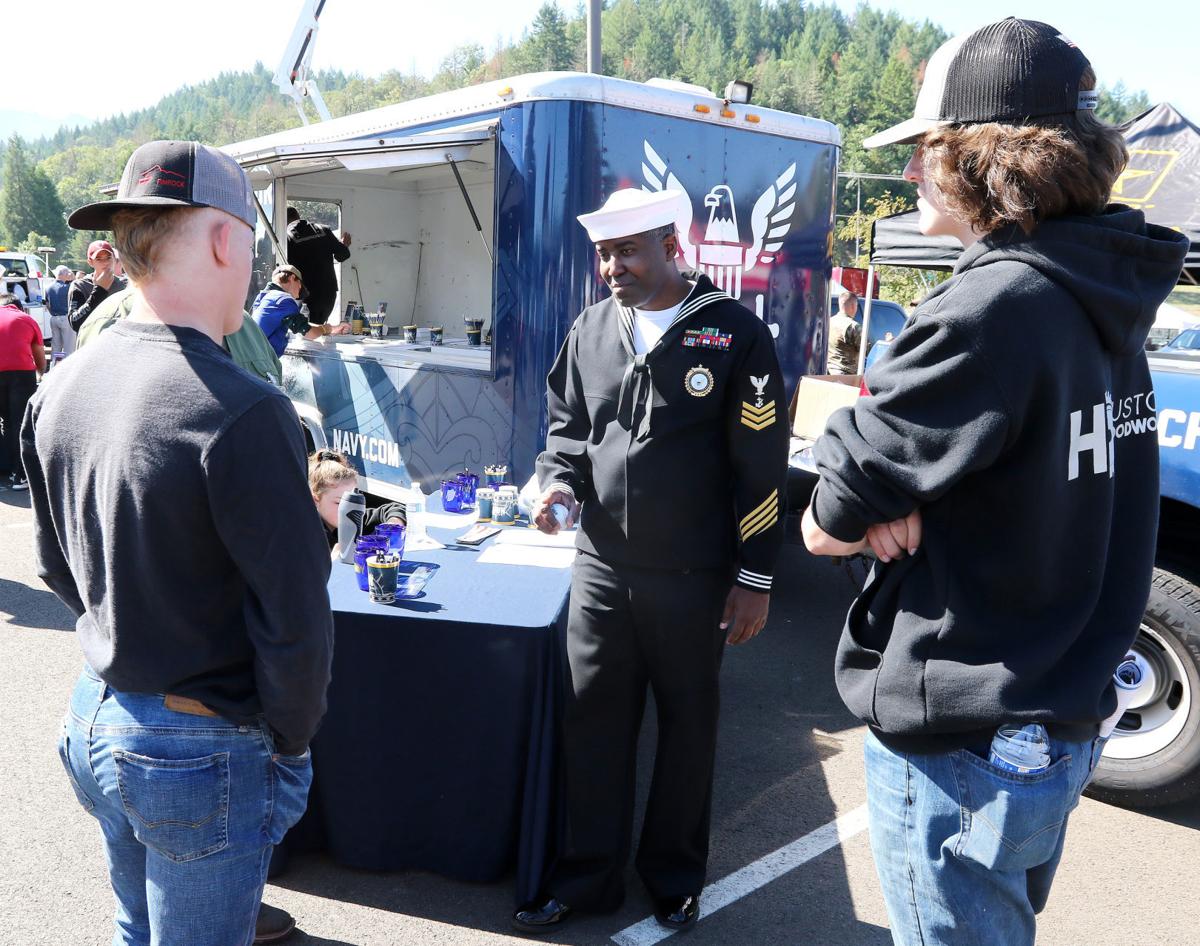 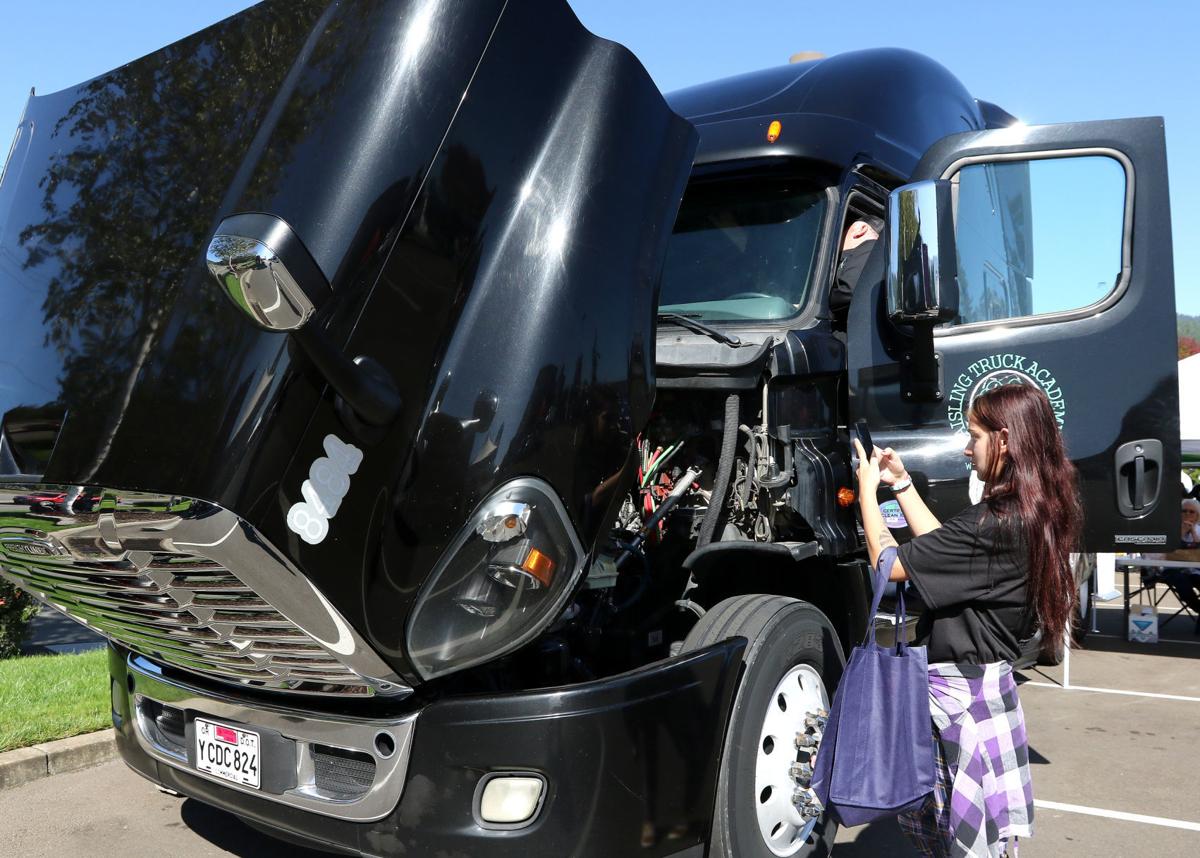 Klamath High School senior Raelynn Phillips checks out the engine of a semi-truck during the Southern Oregon Trade Careers Expo Thursday in Canyonville. 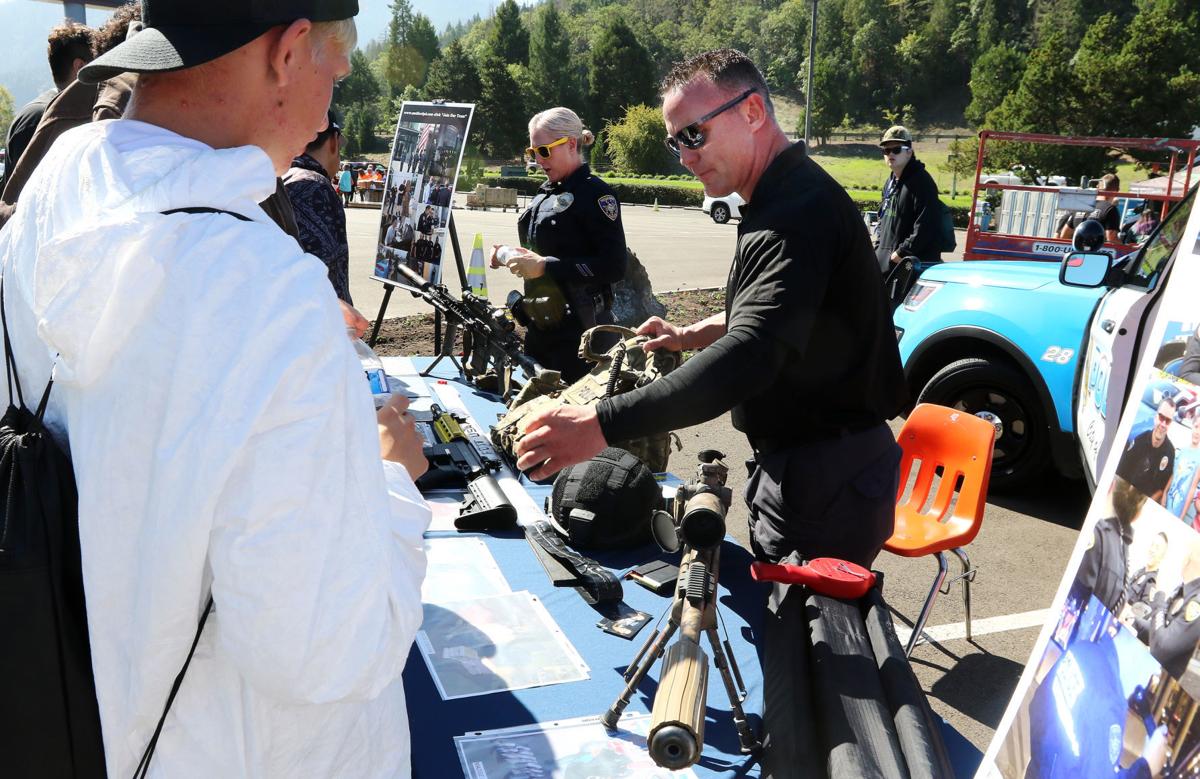 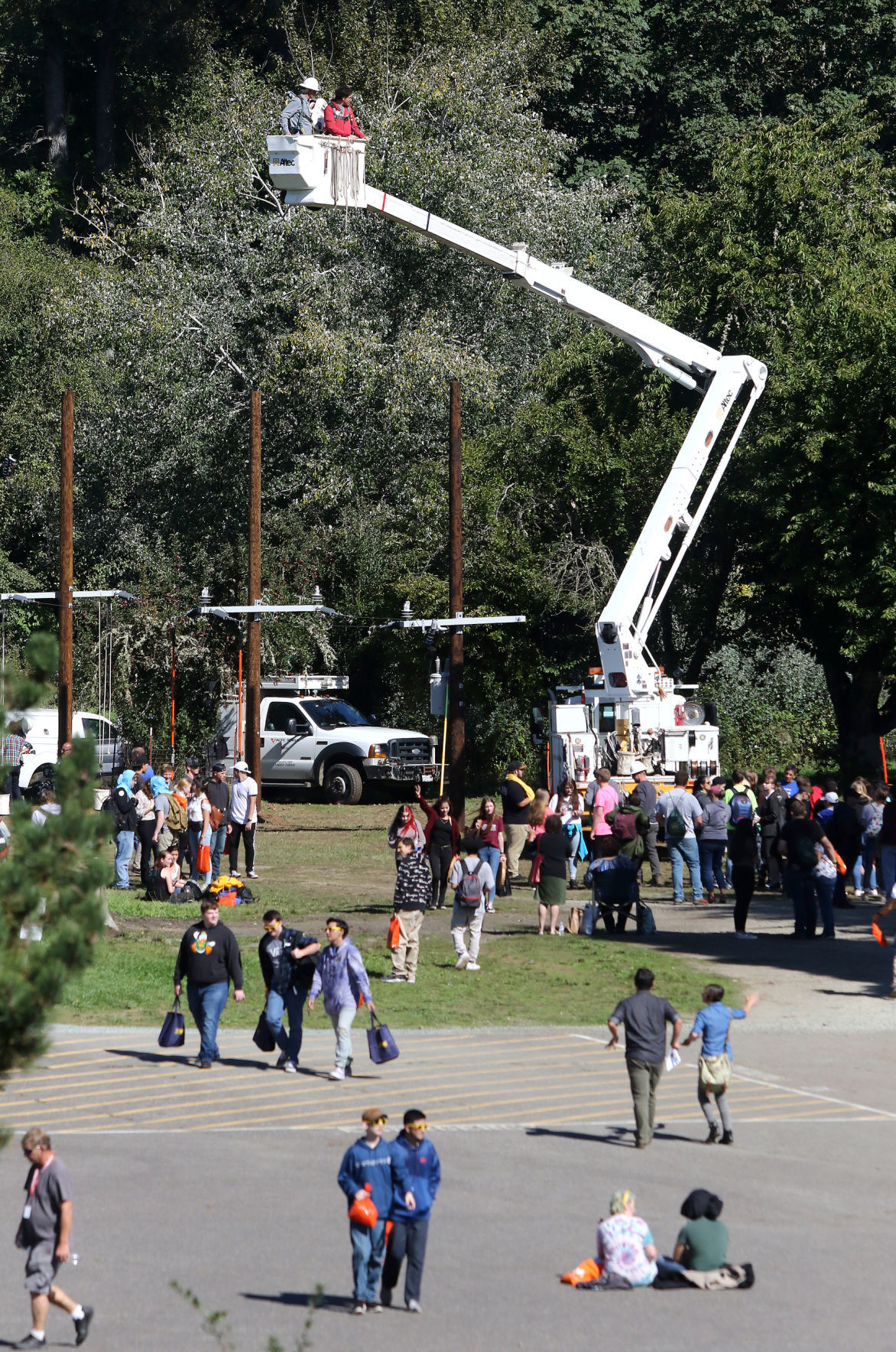 Students line up to check out an elevated view from the extended arm of a Pacific Power work truck during the Southern Oregon Trade Careers Expo Thursday in Canyonville. 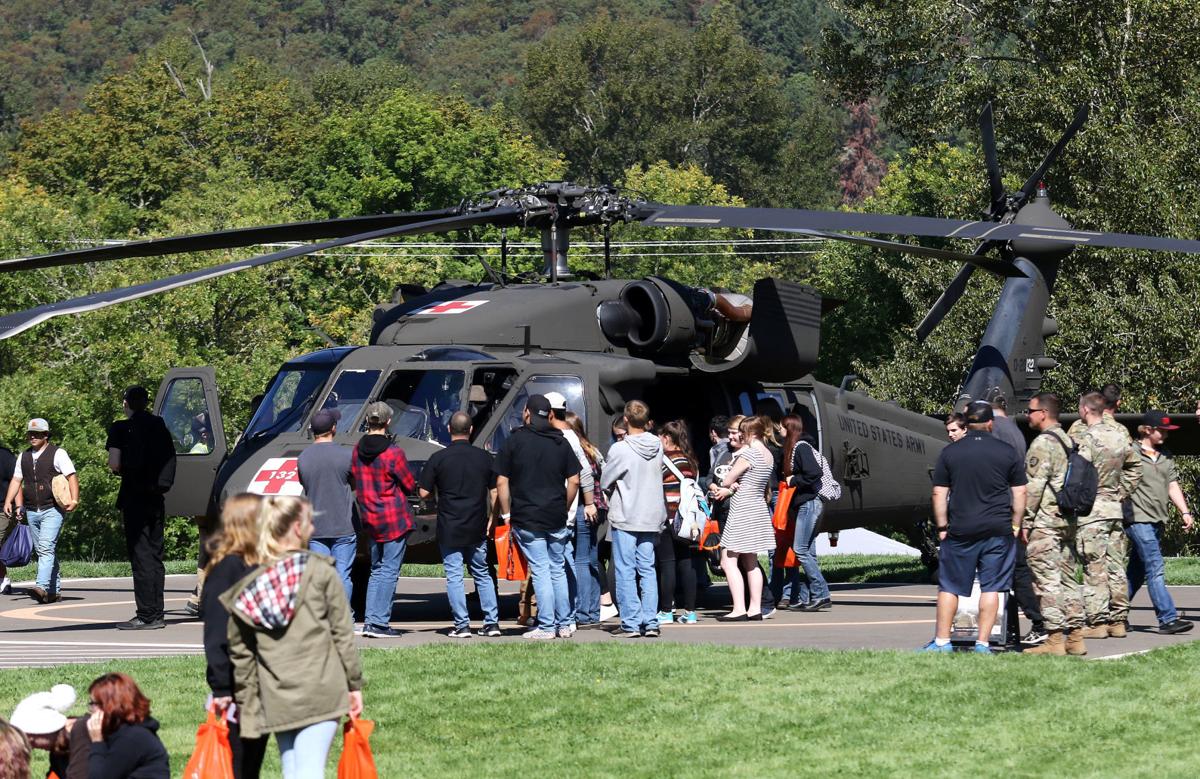 Students get up an up close look at a Blackhawk helicopter used for medical evacuation operated by the Oregon Army National Guard during the Southern Oregon Trade Careers Expo Thursday in Canyonville.

Klamath High School senior Raelynn Phillips checks out the engine of a semi-truck during the Southern Oregon Trade Careers Expo Thursday in Canyonville.

Students line up to check out an elevated view from the extended arm of a Pacific Power work truck during the Southern Oregon Trade Careers Expo Thursday in Canyonville.

Students get up an up close look at a Blackhawk helicopter used for medical evacuation operated by the Oregon Army National Guard during the Southern Oregon Trade Careers Expo Thursday in Canyonville.

CANYONVILLE — Southern Oregon high school students had a chance to work on power lines, interact with a K-9, explore the inside of black hawk helicopter and operate different equipment at the Southern Oregon Trade Careers Expo on Thursday.

There were more than 100 exhibitors at the event, ranging from government agencies to privately held companies to schools and union leaders.

The exhibit took place both indoors and outdoors and spanned across 10 acres.

Approximately 2,000 students from 47 schools from six counties attended the hands-on event at the Seven Feathers Convention Center in the morning.

Wolf Creek Job Corps had a demonstration about courses it taught students about culinary, construction, carpentry, welding and cement work.

According to a booklet handed out to attendees, the purpose of the event was to empower the possible by promoting living-wage careers in professional, manufacturing, trucking, trades, aviation, rail, industrial, commercial, and other industries.

Pape recruiter Nick Chapman said there’s a shortage of diesel techs in Oregon. The company is enticing students by offering to pay for their college tuition.

While being a diesel tech requires a two-year degree, several other jobs shown to students didn’t require any college.

“It’s eye opening to see the options available without a college degree,” Camas Valley junior Hailey Holmgren said. “I’ll probably still go to college, but now I know if it’s not for me I have cushion to fall back on.”

Douglas Forest Protection Agency spokesman Kyle Reed said the company has not had many applicants for its open positions in the last few years. Applicants need to be over 18, be able to complete a capacity test and a drug screen to be a firefighter.

“Teachers and parents will say that you’ll end up working in fast food if you don’t go to college, but there are a lot of options,” Camas Valley junior Izabel Pool said.

Pacific Power had several stations set up where students could experience working as a linesman, such as completing a hotline tab with an 8-foot stick and taking a ride in a bucket lift.

Linesman foreman David Lotspeich said there’s a real shortage nationwide for linesman. People interested in a career as a linesman can start an apprenticeship after high school and get paid while learning the job.

“(The industry) is changing how power is produced with solar and wind power,” Lotspeich said. “But the power still needs to go where it needs to be.”

Pacific Power Regional Business Manager Sam Carter added that while students were waiting to try the activities set up for them, he had the opportunity to talk about the different jobs available with the company such as engineering or wildlife biologist.

There was also an afternoon session for veterans, active-duty military and people referred from different agencies.

The Oregon Department of Transportation’s Regional Workforce and Civil Rights Specialist, Christie Meacham, said the plan is to host the event every other year.

Whoever it was that organized this careers expo, I say Thank You! This is a wonderful opportunity for our young ppl to see, first hand, what is available to them. Please have more career fairs in the future. It's a WIN-WIN situation...