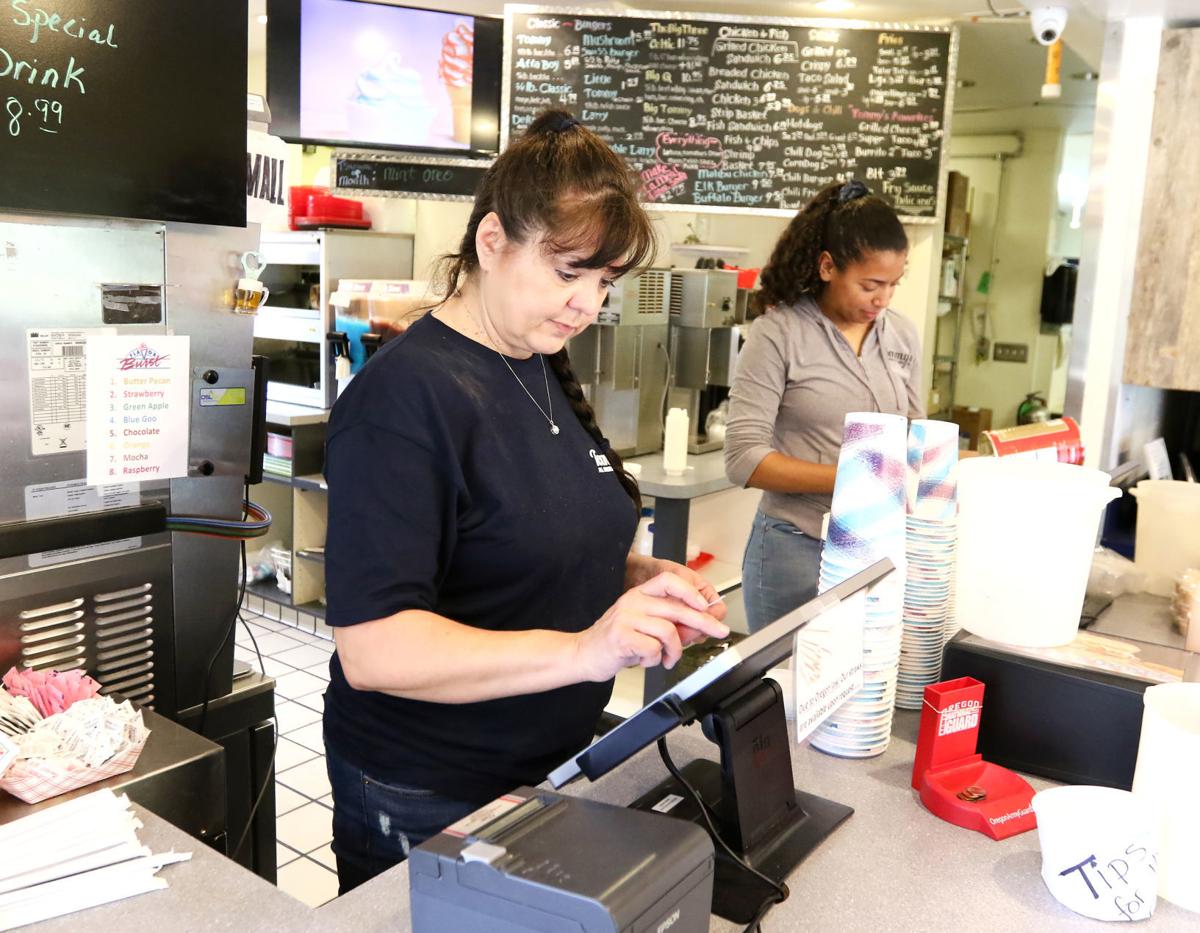 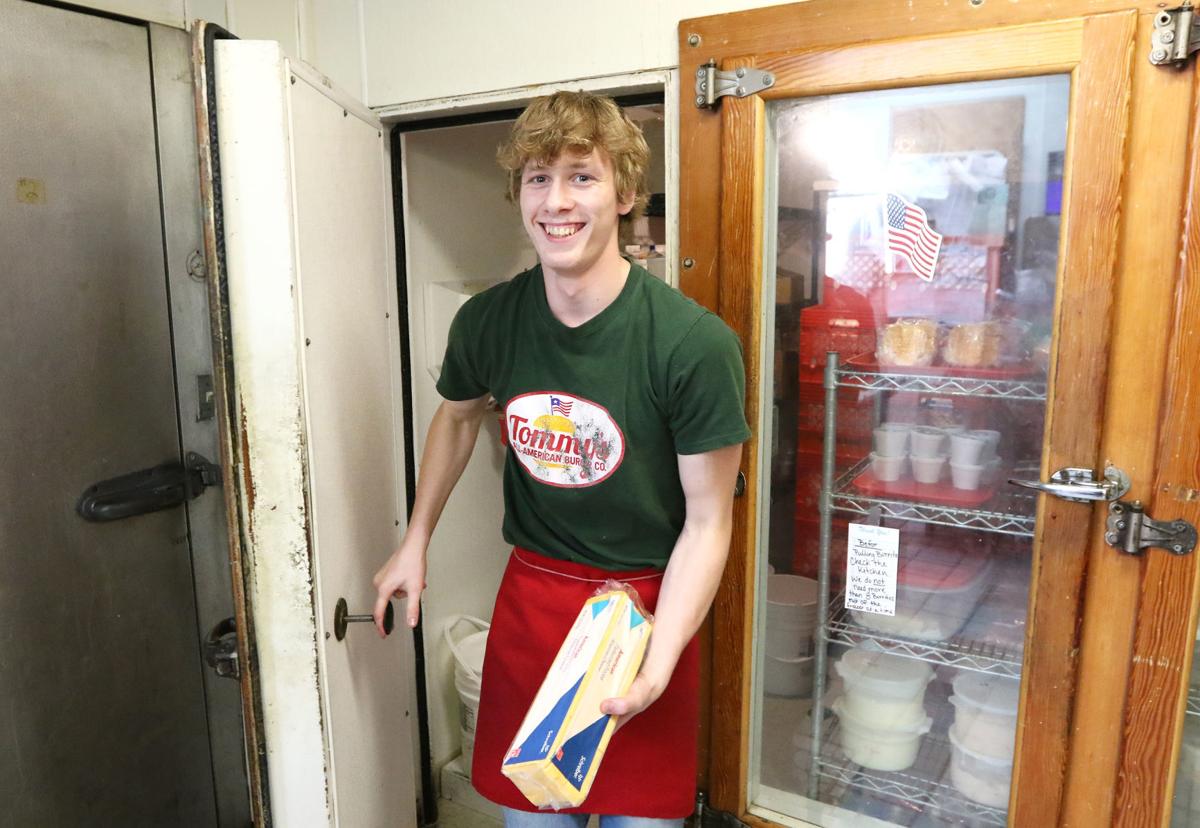 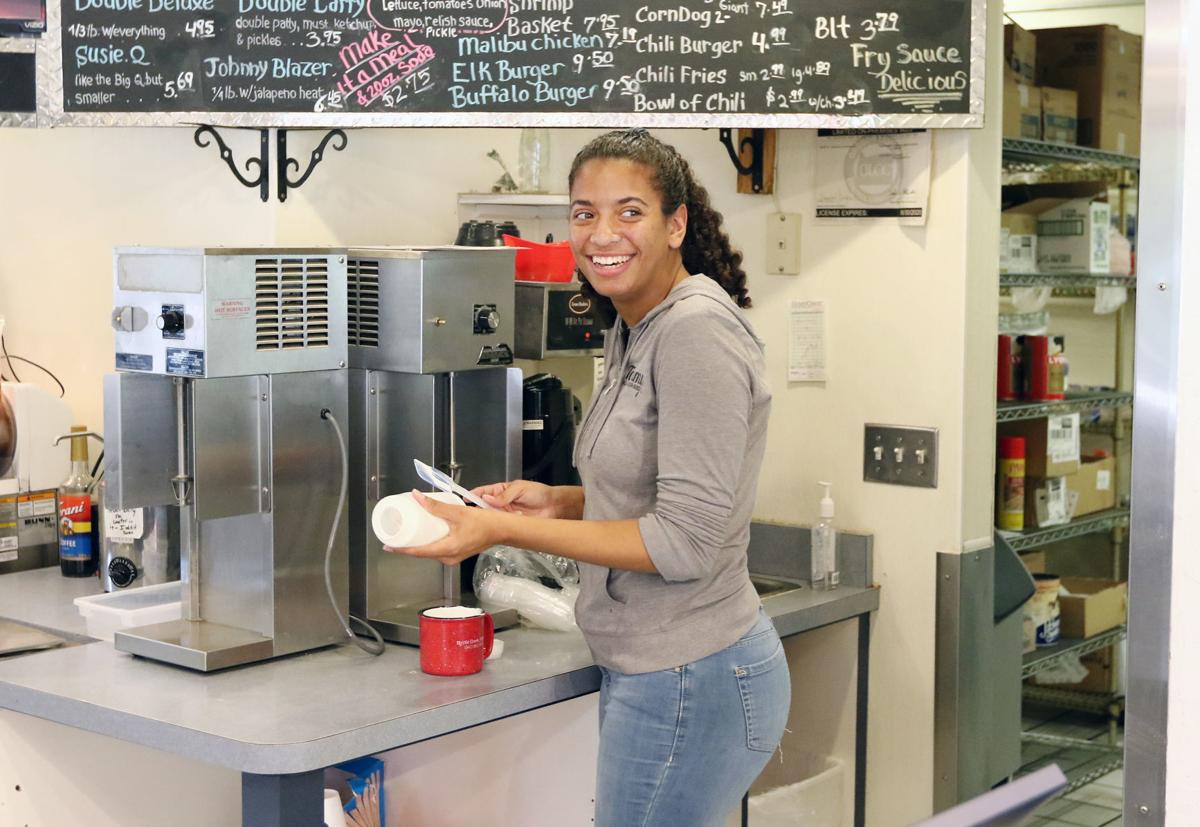 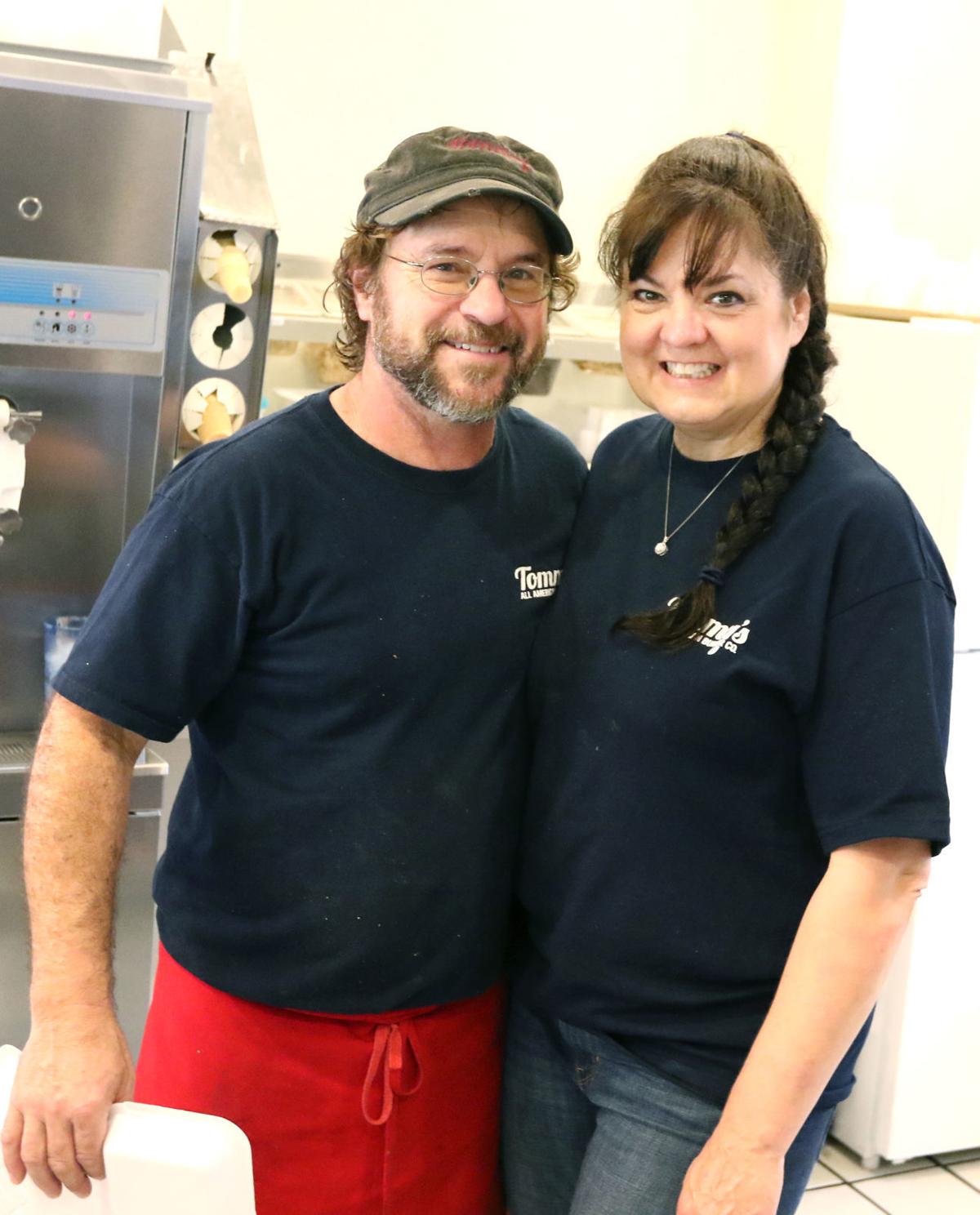 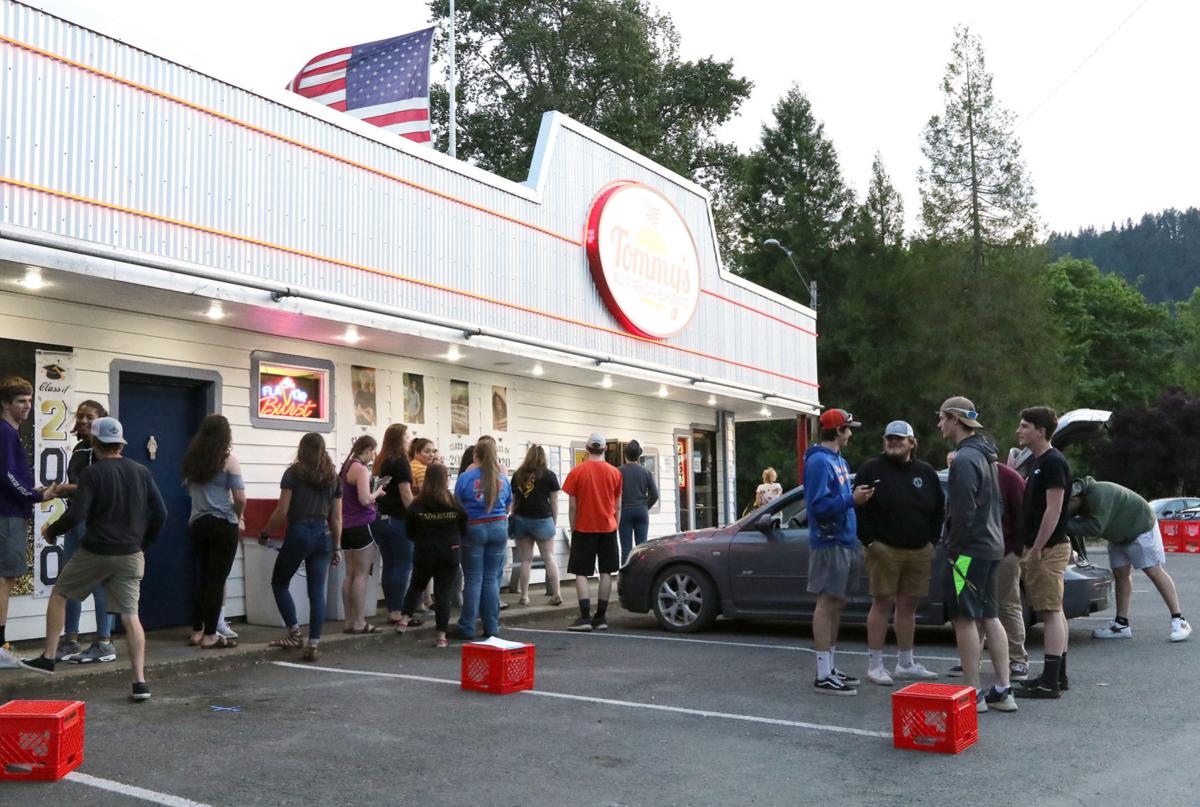 South Douglas County high school seniors line up for a free, “tsunami,” a dessert sold at Tommy’s All American Burger Company during a senior night event Saturday in Myrtle Creek. 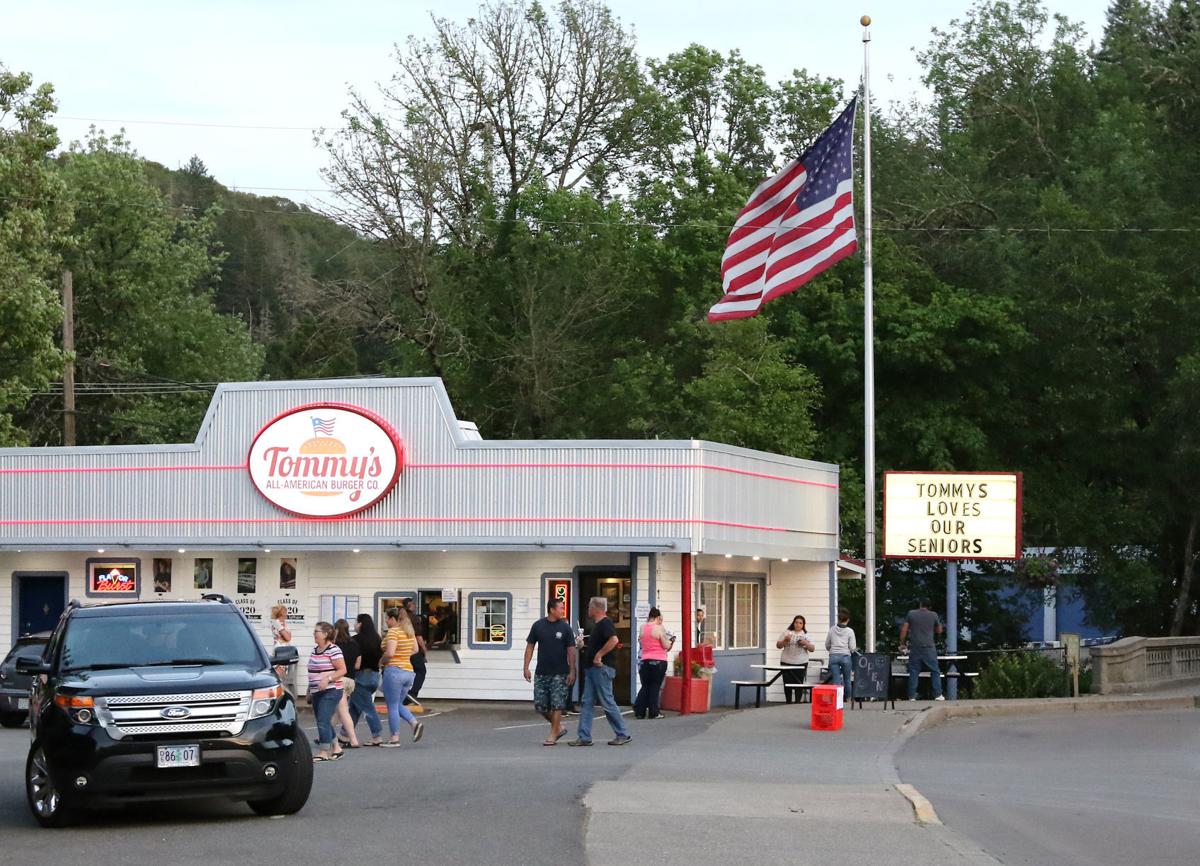 South Douglas County high school seniors line up for a free, “tsunami,” a dessert sold at Tommy’s All American Burger Company during a senior night event Saturday in Myrtle Creek.

MYRTLE CREEK — For more than 50 years, the hamburger restaurant in Myrtle Creek, now known as Tommy’s All-American Burgers, has been a place where high school students would get their first job.

Susan and her sister Julie Banducci worked there when they were in high school in the late 1970s.

Susan said the manager wouldn’t hire her at first, because they “didn’t hire sisters.” Instead, Susan decide to change their mind and leave an impression.

“When I went in for my job interview, I memorized the whole menu,” she said.

She worked along the owner’s son, Tom Lebengood, and the two dated throughout high school.

After high school, they went their separate ways but the two reconnected and in 2005 they got married.

Susan and Tom Lebengood now own the restaurant, which has been in the Lebengood family for 51 years. It was a Dairy Queen until 2016 when it changed to Tommy’s All-American Burgers.

“We wanted to celebrate their accomplishment,” Susan Lebengood said. Umpqua Dairy donated a case of ice cream to help with the celebration.

About 50 high school students showed up to get a free dessert and catch up with their friends.

“It’s not the same, but it’s still an attempt to give the seniors a fun time,” said South Umpqua High School senior Austin Horton. “I respect that they took the time to plan something for us.”

On the outside of the restaurant hung four banners with the names and photos of the high school seniors who are currently working at Tommy’s; Horton, Madison Bauer, Hasina Lathan and Drake Norton.

“It was a really nice way for Tommy’s to appreciate us while also giving some of recognition,” Horton said.

Horton, Lathan and Norton have each worked there for about a year, while Bauer has been employed at Tommy’s for a few months. All are seniors at South Umpqua High School.

“My parents pushed me to get a job because I do so many sports and clubs,” Lathan said. “It’s been really great. It’s an awesome first job.”

“I think I’m very lucky to have this job,” Lathan said. Throughout the school year she worked about three to four days a week, but since the coronavirus pandemic closed schools she’d worked more hours.

Schools throughout Oregon closed their doors to students in mid-March and by April 8, Gov. Kate Brown announced that schools would not be reopening for the rest of the school year and seniors in good standing would automatically receive their high school diploma.

Horton said he was upset when he heard that there wouldn’t be any more school for the remainder of the year, because he said “busted my butt” to go from the 11th student in the senior class to the fifth but wouldn’t have a chance to move up even more than that.

In addition to the four high school seniors, the restaurant also employs three other high school students and a core group of older employees.

“It’s important (to hire high school students) because we are a small business and they can learn customer service before they go on to pick a career,” Lebengood said.

The local business started providing scholarships to high school students in South County two years ago with funds raised through the family and a car show it hosts in July.

Lebengood said it helps students from the South County high schools — Riddle, Days Creek and South Umpqua — because “they’re the ones that come eat here.”