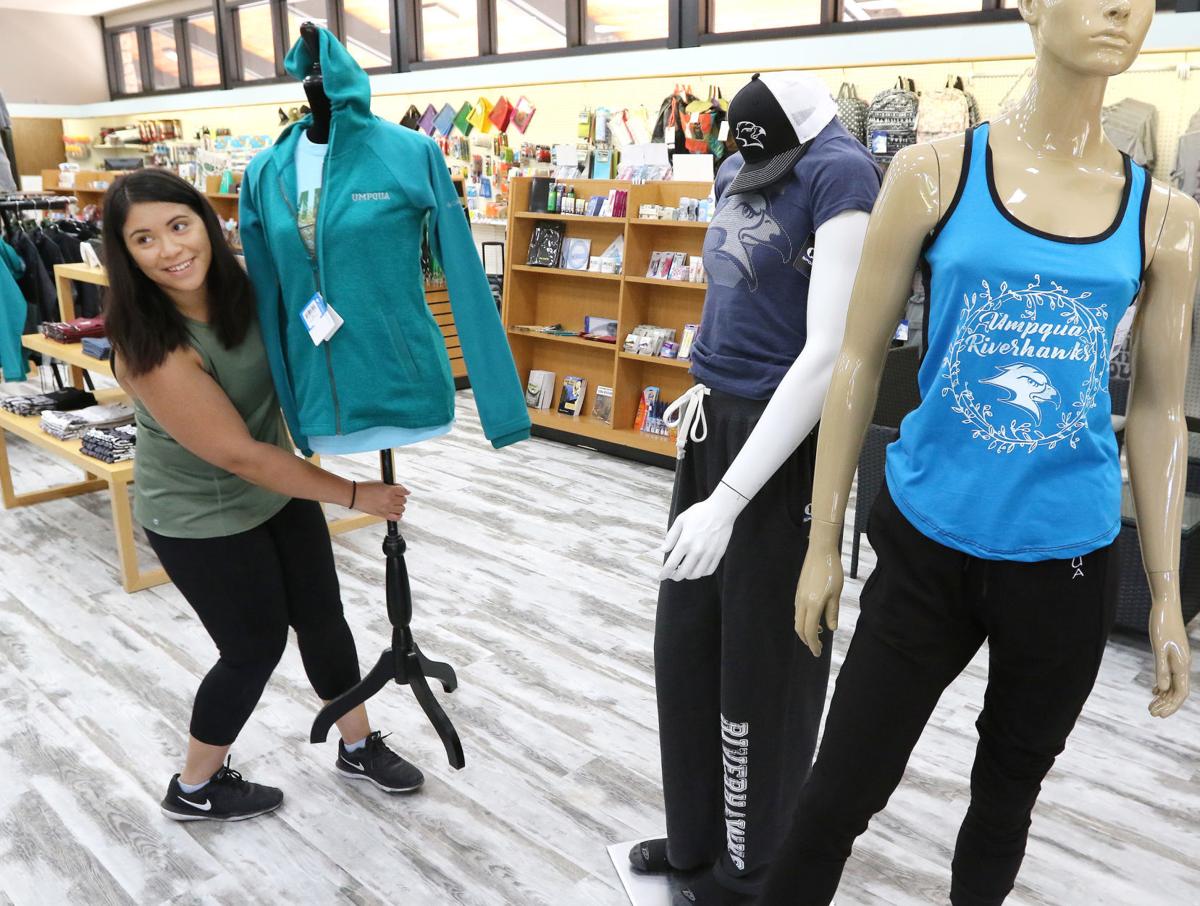 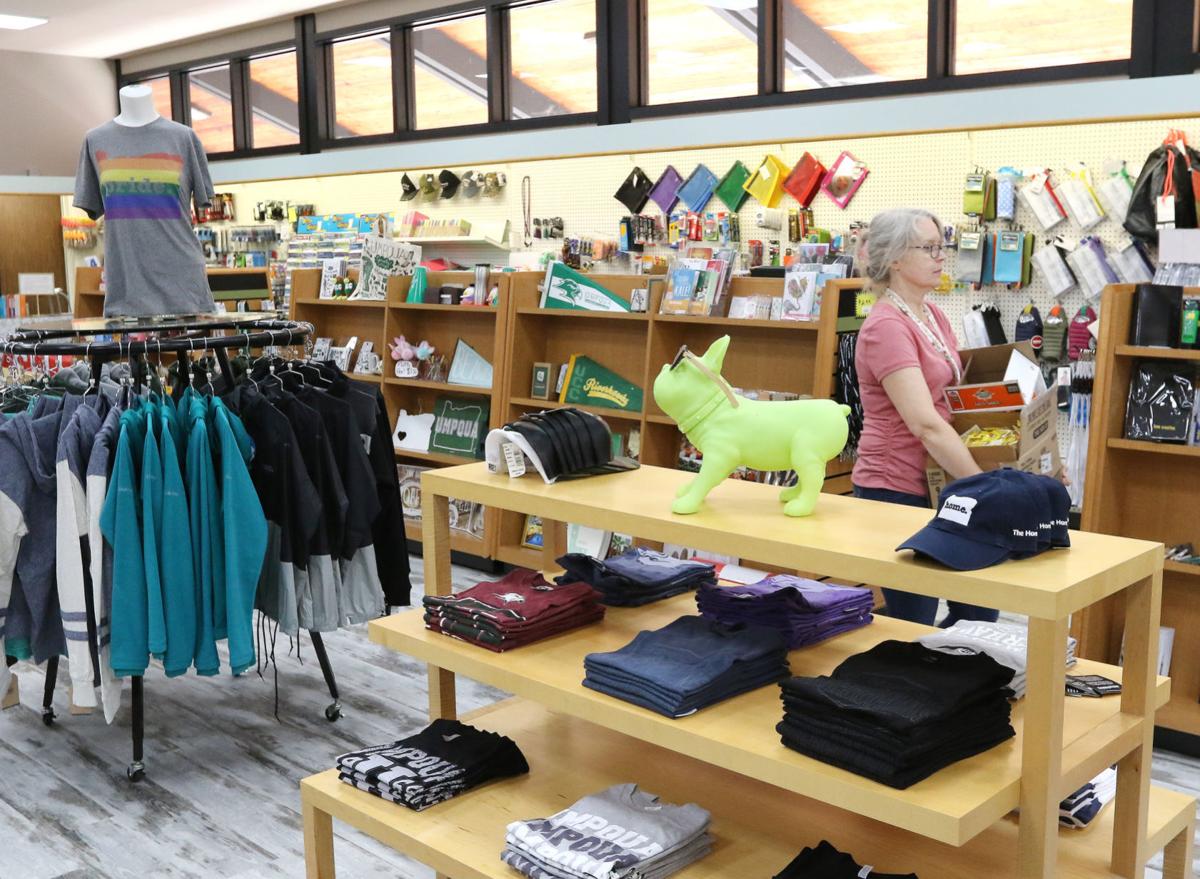 Umpqua Community College Bookstore has undergone a recent renovation in preparation for the upcoming school year. 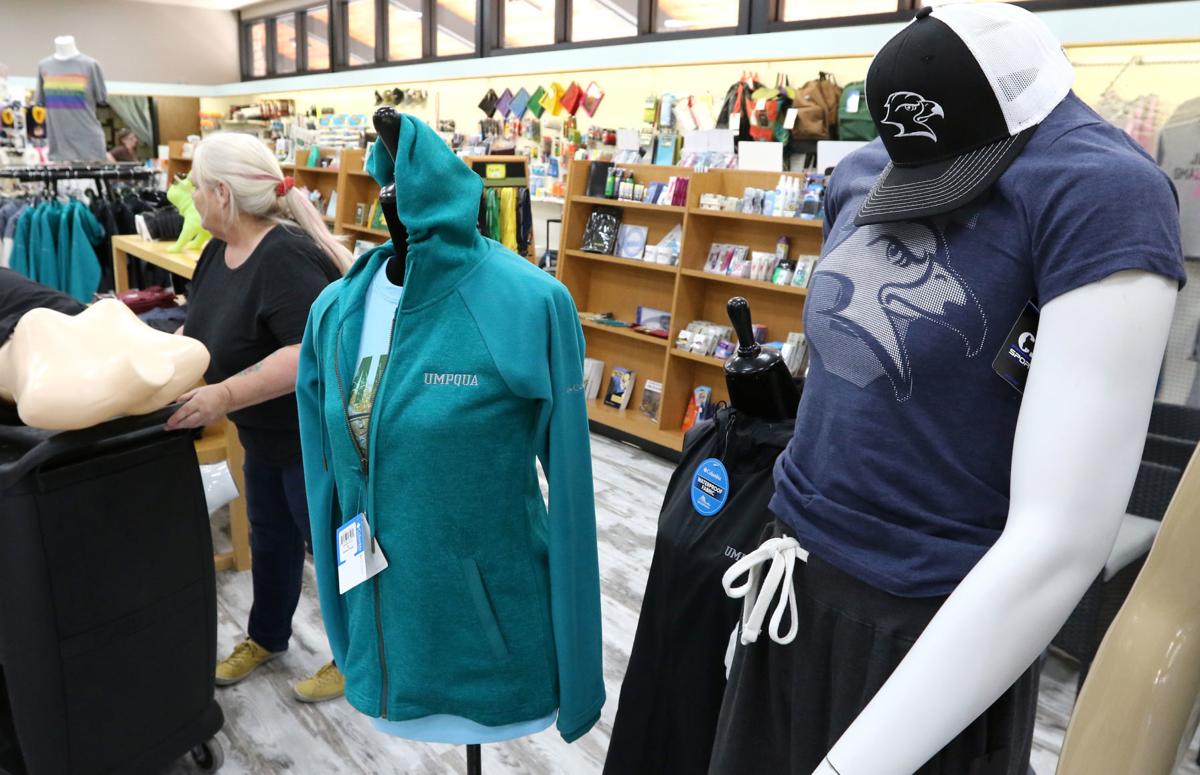 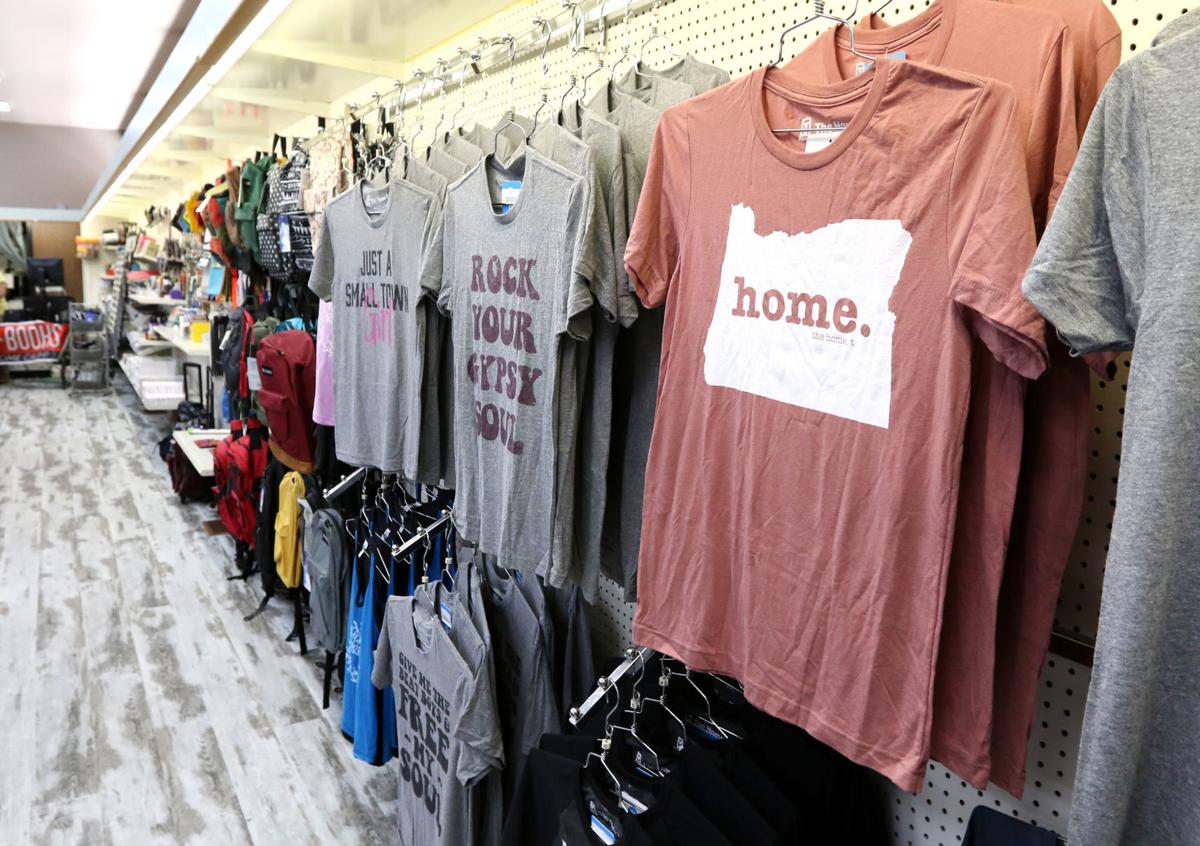 T-shirts and other items sit on display at the Umpqua Community College bookstore on Tuesday. The facility has undergone a recent renovation in preparation for the upcoming school year.

Umpqua Community College Bookstore has undergone a recent renovation in preparation for the upcoming school year.

T-shirts and other items sit on display at the Umpqua Community College bookstore on Tuesday. The facility has undergone a recent renovation in preparation for the upcoming school year.

An online community survey will help determine the new name of the store. As of Thursday morning, UCC spokeswoman Tiffany Coleman said the names for the bookstore and new cafeteria have not been solidified yet.

“We’ve limped by with a store with counters from 1969. The flooring has been here since 1969,” Bookstore Manager Micque Shoemaker said. “We’ve done our best to make it appealing, but now it’s fresher. I’m hoping it’ll be a place people come into.”

Food services were integrated into the campus store after the board of education decided to close the kitchen in the cafeteria during its June meeting due to financial losses.

Bookstore Manager Micque Shoemaker said food options in August and September will include lots of sampling and getting feedback.

“We need to understand what people like and meet the needs of the customer,” Shoemaker said. “Our biggest challenge is price.” She added the target cost for a meal is $5.

“As students are busy, and “on the go,” finding healthy snacks that can be easily taken with them is important,” Dimof said. “Affordability doesn’t have to be compromised when things taste better. We’re aiming for better tasting and better quality.”

A custom coffee and tea counter will also be installed between the credit union branch and the food services area.

New refrigerators will be placed along the back wall to provide a wider variety of cold drinks.

In addition to keeping meals affordable for students, campus staff have also worked to keep renovation costs to a minimum.

The flooring was leftover from another construction site in town and was purchased at a 50% discount. Several counters were refurbished while insurance money paid to repair the ceiling and the roof.

After the late-February snowstorm, a fallen tree branch caused significant damage to the roof and ceiling. Insurance money gave the college the opportunity to repair the damage.

“It gave us an opportunity to repair the way we want,” UCC Chief Financial Officer Natalya Brown said.

UCC received a grant to update the lighting to LED, which was integrated into the new campus store. The rest of the campus will also receive the new lighting, as laid out by the facilities plan.

“I wouldn’t consider it a remodel,” Shoemaker said. “It’s more a renovation, a facelift.”

One longer counter will be in place of two check-out counters. This, in turn, provided more space for a seating area inside the store.

The cafeteria will also include seating for customers.

Textbooks and course material will remain available through the campus store. Materials are kept in the back to free up about 200 square feet of space inside the store.

Staff from the store will get a break room, and a storage area has also been reorganized.

Staffing remained unchanged as the bookstore transformed into the campus store with two full-time positions, two student positions in the summer and up to six during the school year. Shoemaker said she also employs about two or three work-study students per term.

Rogue Credit Union at UCC will be the ninth school-based Rogue Community Credit Union and the second collegiate branch. RCU paid for construction costs related to the branch.

The branch will be operated by students under the supervision of West Roseburg Assistant Branch Manager Chelsea Buckbee.

“Rogue is deeply committed to investing in the youth in our communities and believe that its campus branches not only provide financial services to members and the community but opportunities that allow students to have real-world employment experience in a business setting,” Esqueda said.

Rogue Credit Union is partnering with the college’s business technology department to offer a financial services certificate program, which will be a one-year, 26 credit program with a chance to transfer credits to Southern Oregon University to pursue a bachelor’s degree. Southern Oregon University has the other RCU branch, and students would also be able to transfer employment from UCC to SOU.