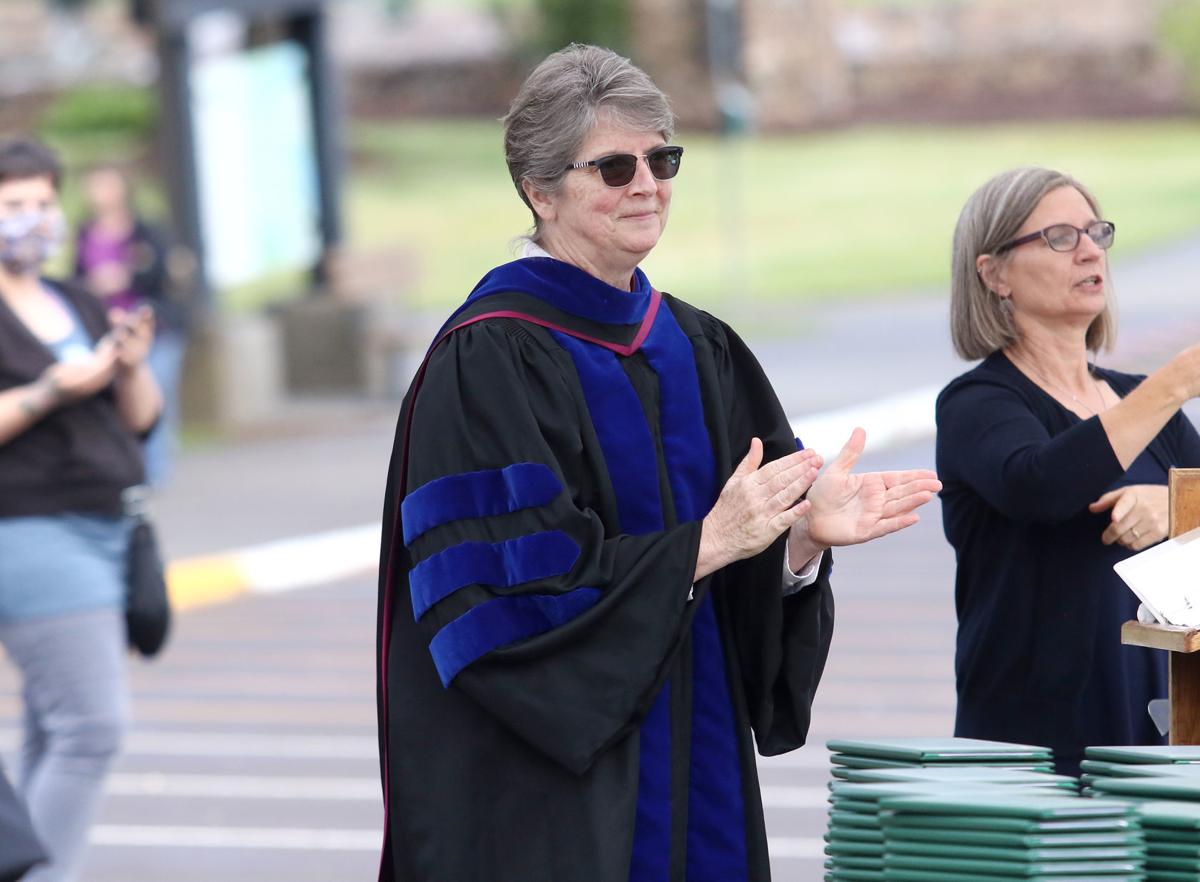 Umpqua Community College President Debra Thatcher applauds graduating students during a parade on Friday. She will retire in July 2021. 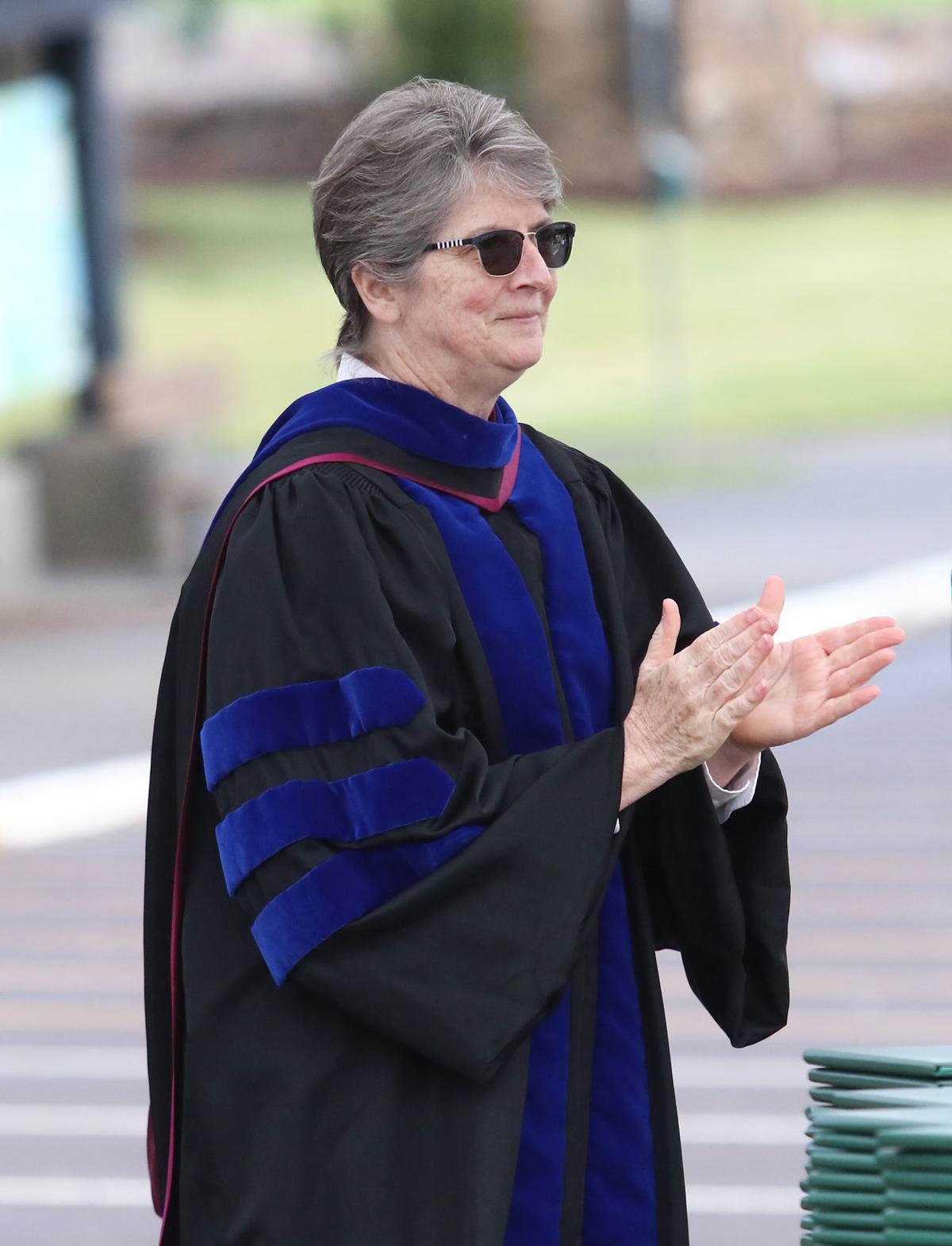 Umpqua Community College President Debra Thatcher applauds graduating students during a parade at the Winchester school on Friday. Thatcher will retire in 2021 and believes the school is in a better place than when she arrived in the summer of 2016.

Umpqua Community College President Debra Thatcher applauds graduating students during a parade on Friday. She will retire in July 2021.

Umpqua Community College President Debra Thatcher applauds graduating students during a parade at the Winchester school on Friday. Thatcher will retire in 2021 and believes the school is in a better place than when she arrived in the summer of 2016.

Umpqua Community College President Debra Thatcher will retire from the college to spend more time with family, but believes the college will be in a strong position after she leaves.

“I’m thankful for how I was embraced,” Thatcher said. “I’ve always felt welcomed. People were willing to work with me and we could disagree but come to a consensus. It not only showed how resilient the community is, but also how well they work together.”

Thatcher announced Monday that she will retire on July 1, 2021. She stepped into the role as president of the college in July 2016.

“This is my first community college and I really wish I had discovered community colleges as a place to work before,” Thatcher said. “Everywhere I’ve been faculty say, ‘Give me better students and I’ll give you better results’ and here the faculty say, ‘Give me anybody who wants to give it a try and I will do everything I can to make them succeed.’ I never hear our faculty say anything negative about the students and they are happy to help them as long as the students are willing to give it a try. That’s so refreshing.”

She also enjoyed seeing the difference community colleges make in the community and seeing the age disparity in the classrooms, calling UCC a “pretty magical place.”

The board of directors has formed a three-person committee to start identifying what qualities and priorities they have for the next president of the college. An official search will start in August.

Thatcher sat down for a Zoom meeting with The News-Review on Thursday to talk about her accomplishments at the college and the goals she has for the remainder of her tenure.

“I never see the accomplishments as my own, because we work with a team,” Thatcher said, adding that she said the change in culture has been significant since the start of her career at Umpqua Community College.

Thatcher said it wasn’t an easy decision to retire, but she feels OK about it.

“This has been a really exciting time at the college,” Thatcher said. “I came in nine months after the shooting and have worked so hard with the campus and the community for healing, as well as to move the college forward. You get caught up in that wonderful activity and it’s hard to break away from it.”

When she first came to the college, she said she wanted to lead the campus with collective improvements to ensure students get the support they need to succeed, and improving relationships with all the county high schools.

“We have people really working together to support students both in and out of the classroom. We have a pretty robust system now in place,” she said. “It was tested here with COVID-19 as we moved online. Even though some of them struggle with the delivery of courses part, because they like face-to-face, but they really rated the college high in terms of support, communications and access to the services on campus they need to be successful.”

In the last four years, the college has hired additional recruiters and advisers and made structural changes that increased dual enrollment numbers, including new health courses and a nursing assistant program that will start in high schools this fall.

The 2020-21 school year is important according to Thatcher as it is the third year in the strategic plan, which focused on improving efficiency, improving academics and looking at the college with an equity lens while making data-informed decisions.

“When I came here we were spending more than we had, and depleted our reserves,” Thatcher said. “Now, we have a little more money in reserve.”

Thatcher plans to move to Northern Michigan to be near family next summer.

“Most of my professional life I’ve lived far away from relatives and drug my husband along,” Thatcher said. “In retirement, we’d like to return to family.”