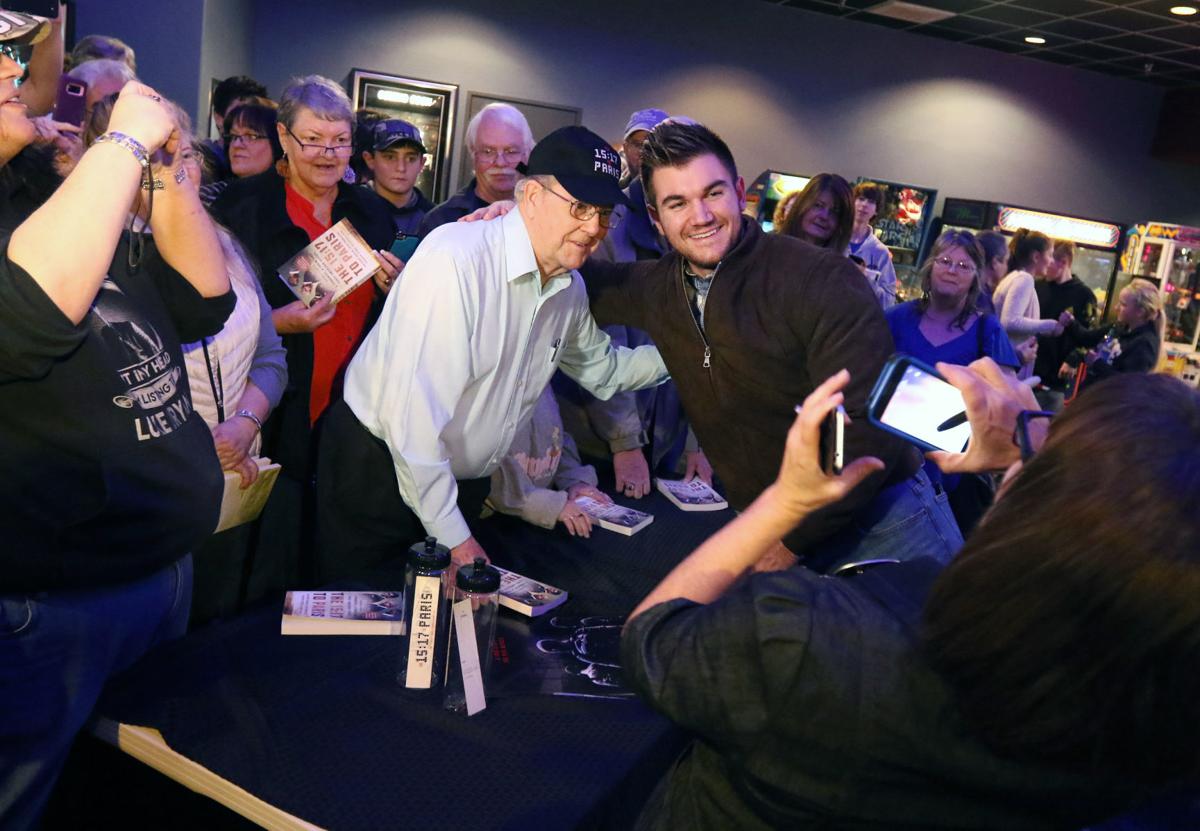 Alek Skarlatos, right, poses for a photo with Bill Topper of Roseburg at Roseburg Cinema in 2018. 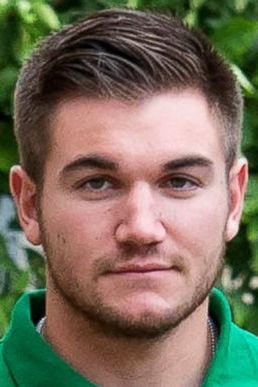 Skarlatos cited federal timber policy as his top reason for running. He said attempts to protect the environment by reducing logging have backfired, creating forest fires that pour carbon into the atmosphere.

“Peter DeFazio took office I believe in 1987, and over his tenure he’s pretty much overseen the downfall of the entire timber industry, has done nothing about it, and the economy and the environment are worse off because of it,” Skarlatos said.

Skarlatos will first have to face longtime candidate Art Robinson in the Republican primary. Robinson is on his sixth run for the office. He has consistently won Douglas County but lost the district, which skews to the left because it includes Lane County.

Robinson is more conservative, whereas Skarlatos is more of a libertarian, Skarlatos said. He cited marijuana laws as an example.

“I’m not against marijuana. I’m not necessarily for it either, but I believe that people should be able to make that choice on their own,” he said.

He said Robinson isn’t bringing anything new to the table.

“I just think he’s a little bit too extreme for my taste. That being said, I do agree with him on a lot of issues, and it’s just trying to appeal to the voters. Honestly, I just don’t think anybody’s really given him a run for his money in a long, long time,” he said.

This is not Skarlatos’ first run for office. In 2018, he ran unsuccessfully for Douglas County commissioner. In that race he garnered 35% of the vote, coming in second place to Tom Kress, who won the seat with 38% of the vote.

Skarlatos is perhaps best known for his role in thwarting a terrorist attempt on a Paris-bound train in 2015.

Skarlatos and two of his friends took action after a gunman armed with an AK-47, a handgun and a box cutter emerged from a train bathroom, then fired shots on the train, which was headed to Paris from Amsterdam.

Since then, Skarlatos has received multiple medals, been awarded the French Legion of Honor and taken third place on the ABC program “Dancing with the Stars.” He played himself in a Clint Eastwood movie about the train incident called “The 15:17 to Paris.”

Despite, or perhaps because of, his experience on that train, Skarlatos is a staunch supporter of gun rights. He noted that despite tough gun control in Europe, the would-be terrorist was able to arm himself with an AK-47 and a handgun.

“Terrorists still blow people up, they run people over with trucks, they stab people. Evil’s evil, and banning an inanimate object isn’t going to change any of that,” he said.

On immigration, Skarlatos believes in closing the border.

“I mean we can’t have people coming to this country that we don’t know who they are or where they’re coming from,” he said.

On health care, he’s opposed to socialized medicine of any kind. He said safety nets are needed, but he believes those are already in place.

On climate change, he said he doesn’t know if climate change is man-made, but returned to the timber issue, saying forest fires dumping tons of carbon into the atmosphere is worse than logging.

“I don’t care if you’re a tree-hugging hippie or you’re a log-everything timber industry magnate. We need more responsible forest management and both sides need to compromise and take a serious look at this issue and how to solve it,” he said.

Skarlatos is a Roseburg High School graduate and a former Roseburg Costco employee. He spent five years as an Oregon Army National Guardsman with Charlie Company.

Three Republicans file in hopes of running against DeFazio

Art Robinson is no longer running for Congress. The Cave Junction chemist dropped his bid for the seat held by U.S. Rep. Peter DeFazio, D-Spri…

I'd vote for him. DeFazio is way to liberal for me. I too am libertarian in my politics so Alek would probably match my values. How many times has Robinson ran against DeFazio and lost? Make room for new blood!

A grandstanding nobody! Go back to COSTCO, and work for a living!

I agree. No experience, just cashing in on his "fame". A puppet for the timber industry. No clue on the issues. Repeats the timber mantra. How many BOC meetings did he ever attend before he ran for that position ?

I really wish the media would stop feeling the need to go on about his hero story everytime hes talked about! I want to know what kind of person he is without a story attached to him from something that occurred FOUR years ago now! From what I can see, without it he doesn't equal too much, and hes banking on his fame and notoriety to get him where he wants in life. During the county commissioner election, I can guarantee you he wouldn't had even got more than single digit votes if he ran without his story. The commissioner race also wasn't really as close at it seemed when you take into account that 1500 voters from the below average IQ of douglas county voted for a candidate that announced a month before that he was no longer running....to think what else those people do in the real world without being able to think for themselves like that, terrifies me. Had those 1500 people voted for the two candidates that were actually still running, I think the number would have had a bigger gap.

Also, what the heck has he been doing for employment since returning as a "hero"? From what I read during the commissioner election, he had not been working for Costco for several years prior to that event happening. How is he supporting himself with no income or job? Unless he has some other secret job that we and the news review doesn't know about? Sure he may have gotten a good chunk of change from being on dancing with the stars and his movie, but thats not going to last him for the rest of his life, and I doubt someone at his age is the most responsible with that kind of money. It seems to me like he doesn't want to go back to being a "normal" person after his 30 seconds of fame, so hes trying to go straight to the top of big pay jobs (politics) and hoping his fame from people that unfortunately will vote for him just over that alone will get him there.

I really hope voters uses their heads with him this time around, but this is douglas county.....so I probably shouldn't be expecting too much.