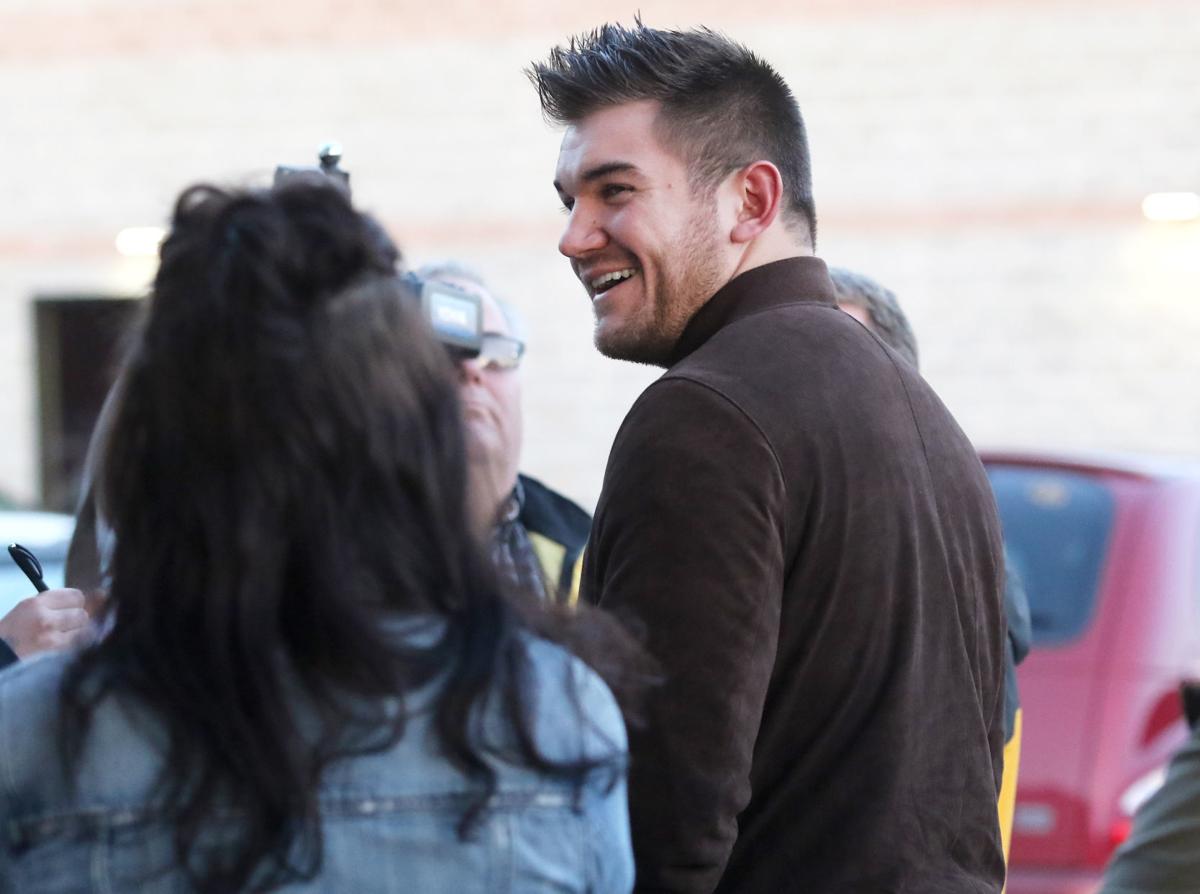 Alek Skarlatos speaks with media before a special screening of ‘The 15:17 to Paris’ in 2018. Skarlatos was endorsed by Albany Republican Jo Rae Perkins in his campaign for a U.S. House of Representatives spot. 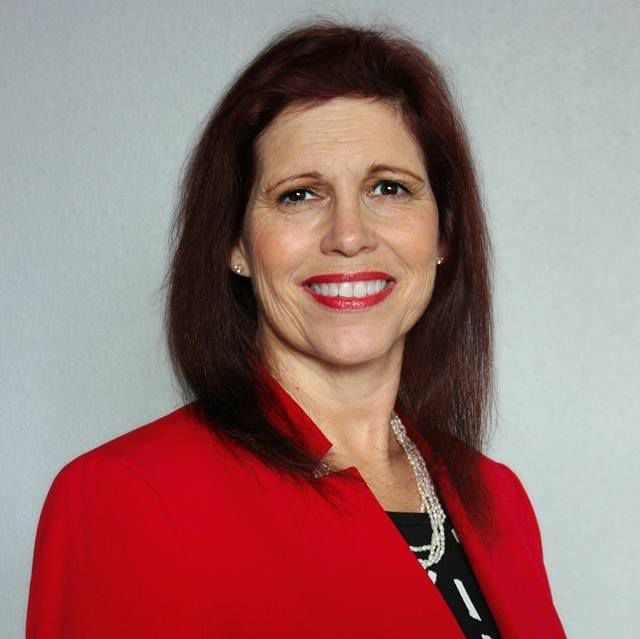 Albany Republican Jo Rae Perkins has dropped out of the running for U.S. House District 4 and endorsed Roseburg’s Alek Skarlatos.

Perkins plans to run instead for the Republican nomination to the Senate seat currently held by Jeff Merkley.

In a press release, Perkins said she made her decision to run for Senate based on what she called the “sham impeachment trials” against President Donald Trump.

“While Oregon families are expressing their frustration with job-killing regulations, the price of prescription drug prices, radical policies like the Green New Deal, and national security, Jeff Merkley has been more focused on impeaching the president and political games irrelevant to Oregonians,” Perkins said.

Merkley is running in the Democratic primary against challenger Michael David of Ashland.

Perkins ran twice unsuccessfully for the Republican nomination to DeFazio’s seat, losing both times to Art Robinson. She is an insurance agent who said she gave up a lucrative career as a financial adviser because she believes she is destined to hold a seat in Congress. In her 2016 run she garnered 32% of the primary vote, and in 2018 she received 21% of the primary vote.

The House District 4 is currently served by Rep. Peter DeFazio, D-Springfield. With Perkins’ exit from that race, three Republicans are left to battle in the May primary for the right to challenge DeFazio in November. In addition to Skarlatos, they include Robinson, a Cave Junction chemist who has five times won the Republican nomination only to lose to DeFazio in the general election, and Nelson Ijih, a computer scientist and entrepreneur from Eugene. DeFazio also faces primary challenges in his own party from Doyle Canning of Eugene and Cassidy Clausen of Springfield.

Skarlatos is perhaps best known for his role in thwarting a terrorist attempt on a Paris-bound train in 2015.

Skarlatos and two of his friends took action after a gunman armed with an AK-47, a handgun and a box cutter emerged from a train bathroom, then fired shots on the train, which was headed to Paris from Amsterdam.

Since then, Skarlatos has received multiple medals, been awarded the French Legion of Honor and taken third place on the ABC program “Dancing with the Stars.” He played himself in a Clint Eastwood movie about the train incident called “The 15:17 to Paris.”

Skarlatos made an unsuccessful bid for Douglas County commissioner in 2018, losing narrowly to businessman Tom Kress.

In a press release, Skarlatos thanked Perkins for her endorsement.

“I’m honored to be endorsed by Jo Rae Perkins and wish her well as she seeks the Republican Nomination for the U.S. Senate,” he said.

Three Republicans file in hopes of running against DeFazio

Art Robinson is no longer running for Congress. The Cave Junction chemist dropped his bid for the seat held by U.S. Rep. Peter DeFazio, D-Spri…

"She is an insurance agent who said she gave up a lucrative career as a financial adviser because she believes she is destined to hold a seat in Congress." Well, Destiny's Child, good luck with that. Neither of these folks is going very far.

According to google, Mr. Skarlatos completed his Federal Election Commission Statement of Candidacy for Oregon's 4th Congressional District on August 15, 2019. The candidate filing deadline is March 10, 2020.

Mr. Skarlatos was deemed a "hero" by multiple government entities due to his actions abroad. I think people from Douglas County in general are proud of his achievements as our representative. I know I am. I told him so when I met him and his mother at Costco. Calling it 5 minutes of fame is disrespectful to him and all veterans who served their country.

Mr. Skarlatos did fail to win in last year's County Commissioner election. But the real story is the underhandedness of the people in power necessary to make that happen. It's a story of lies, bribery and a local media unwilling to expose the truth. It's a sad story for and about Douglas County. A story no one should be proud of.

He wasn't "serving our country" when the train story happened, he was on vacation in another country. My problem also is that he just used his fame and notoriety as a platform to keep himself revilement. When the story broke out it was all anyone talked about here. Than the UCC shooting happens and no one gave a hoot about Alek anymore as he was yesterday's news. Than he announced candidacy for county commissioner and hes back to the top spot local news here. What really bothered me was on quite a bit of his social media postings when he announced some event he'd be hosting in relation to his county commissioner stuff, he'd quite often put things on there like "bring a copy of my book (that he didn't even write himself) or movie, and I'll sign it!" It seemed to be all one big publicity stunt to me to keep himself relevant. Also a lot of the candidates at that time had booths set up at the fair. Alek's seemed to be nothing more than a show and tell of pictures of himself with famous people who only gave a rip about his existence because of his 5 mins of fame.

Also, while I won't argue that theres a lot of corruptness with our local government, I don't think there was any "under handing" being done, that was just people being stupid and not thinking for themselves when it came to voting. 1500 people voted for a candidate who announced a month before he dropped out. If those people would have all voted for Alek, he would have won. The stupidity of douglas county saved/broke the election depending on whose side you took.

A politician is a person seeking office in government. To be successful requires they distinguish themselves from their political opponents in a way voters approve, mostly with the positions they take on local issues.

I attended the Women's League of Voters Q&A before the election and listened to each Commissioner candidate's positions and found most of them in agreement on a wide variety of issues including Mr. Kress who was eventually elected as Commissioner. Not once did Mr. Skarlotos broach the subject of his heroism which some people take issue with. But everybody in attendance knew and wanted to hear what he had to say about his platform. I think most were impressed. Probably why he got second place in voting.

Voters often elect famous people into office. Our country's President is an example. A candidate's fame is merely one means of distinguishing their platform from their opponents. Most people can look past the fame to the message they are trying to convey. Some people have their own reasons for choosing not to. I respect that.

Some people choose to besmirch political candidates for the very fame that provides positive publicity for Roseburg and our County, something our chamber of commerce and development committees continually strive for and literally spend advertisement money on. That is their right in our fine country. Yet, one can only cringe when considering how poorly Troy Polamalu would be treated by those same people if he chose to move back to Douglas County and seek public office.

OMG, enough of his hero story! We're all sick and tired of hearing it over and over again! Also is Alek even "officially" in the race yet? Last I heard he hadn't actually secured enough funds to where he could be added to the ballot. Probably because what he thought was an infinite money supply from his 5 mins of fame has finally started to run dry. All these endorsements from various people mean nothing in the end if hes not actually in the race!

If he failed to win a government position for something in his own town where most people knew him, its doubtful he'll win something state wide where contrary to what he probably believes most people probably have no idea who he is.

@sectorstar: Speak for yourself. I love a hero story. Alek's is an especially good one. You've established yourself as anti-Alek since he ran for commissioner (where he was narrowly defeated – 2%? – by a candidate who outspent him almost 2:1, and where a large % of those funds came from business, not the individual voter), so consider that we "all" might be "sick and tired of hearing" your Alek-bashing "over and over again."

Skarlatos has been in the race and on the ballot since 2019.

The problem I have is that at this point his hero story has been greatly exaggerated and most of the population is led believe only parts of it or doesn't even know the whole story. When you actually read detailed articles about who was where, and who did what, Alek actually contributed the least to the whole event. It was more of "he was there, and helped out", but somehow hes become the face of the ENTIRE story completely overshadowing Stone and Sadler. In this article and several others they've now been demoted to nameless background characters, for instance in this article just as the unnamed "two friends". Its disturbing to me how many people that know about the "Story" have no idea of Stone and Sadler and seriously think that Alek single handily did everything himself with no help. Than we have all these uneducated voters voting/supporting him based off of that incorrect information. Yes he got lots of votes during the commissioner run, but how many of those people were actually voting for him because they thought he could do well in politics and not because they were his friends or liked his story? Take away his story and he does't amount to much.