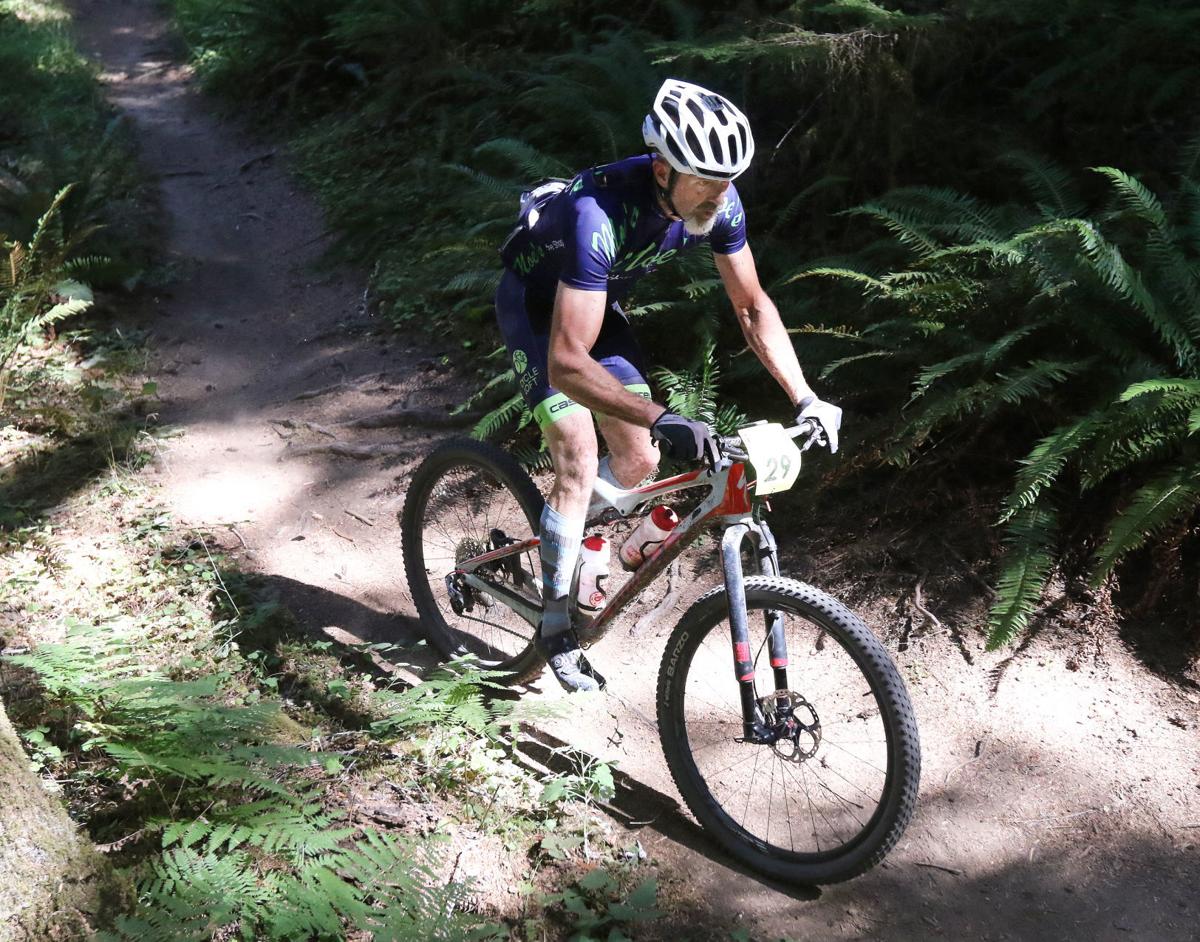 Scott Hood of North Bend competes in the N.U.T.cracker mountain bike race in the Umpqua National Forest east of Idleyld Park on Saturday. 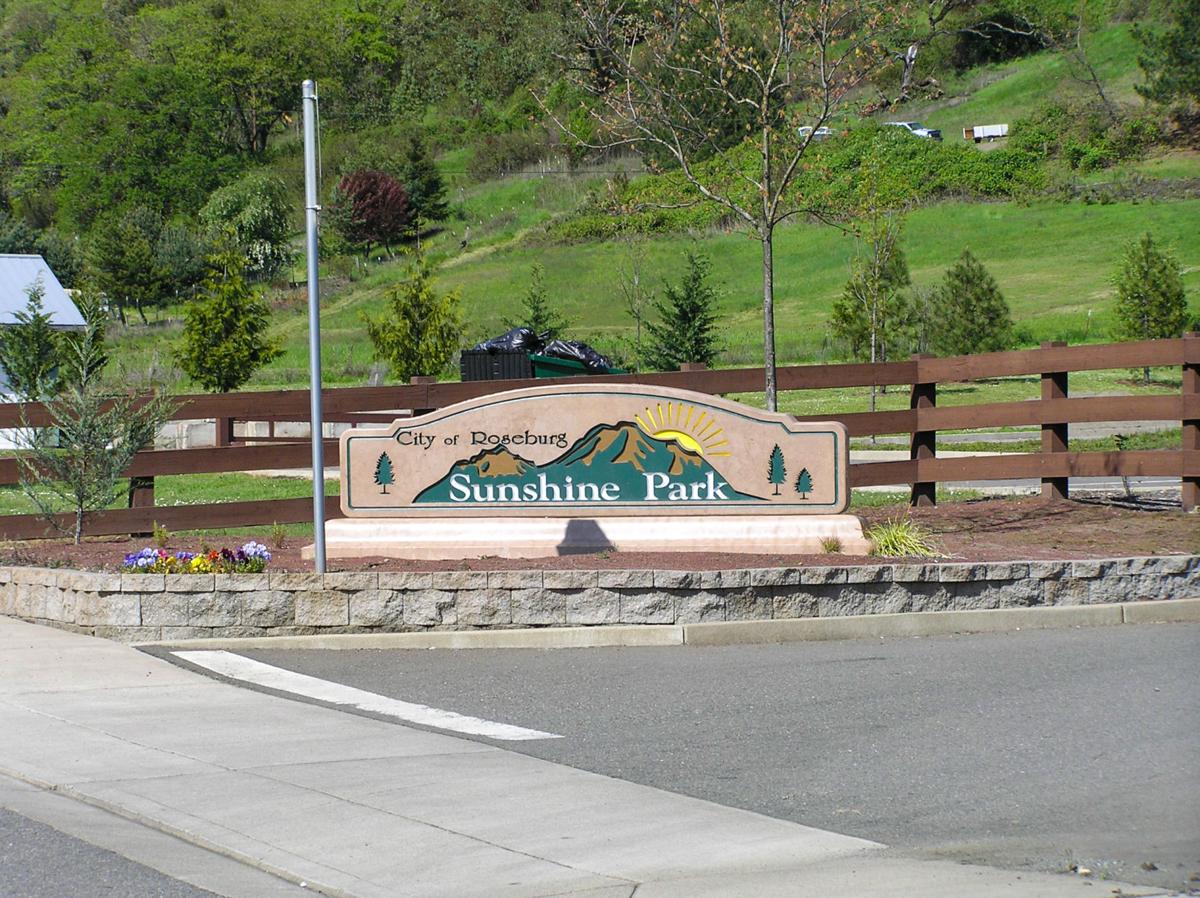 Sunshine Park east of downtown Roseburg may be home to mountain bike trails. 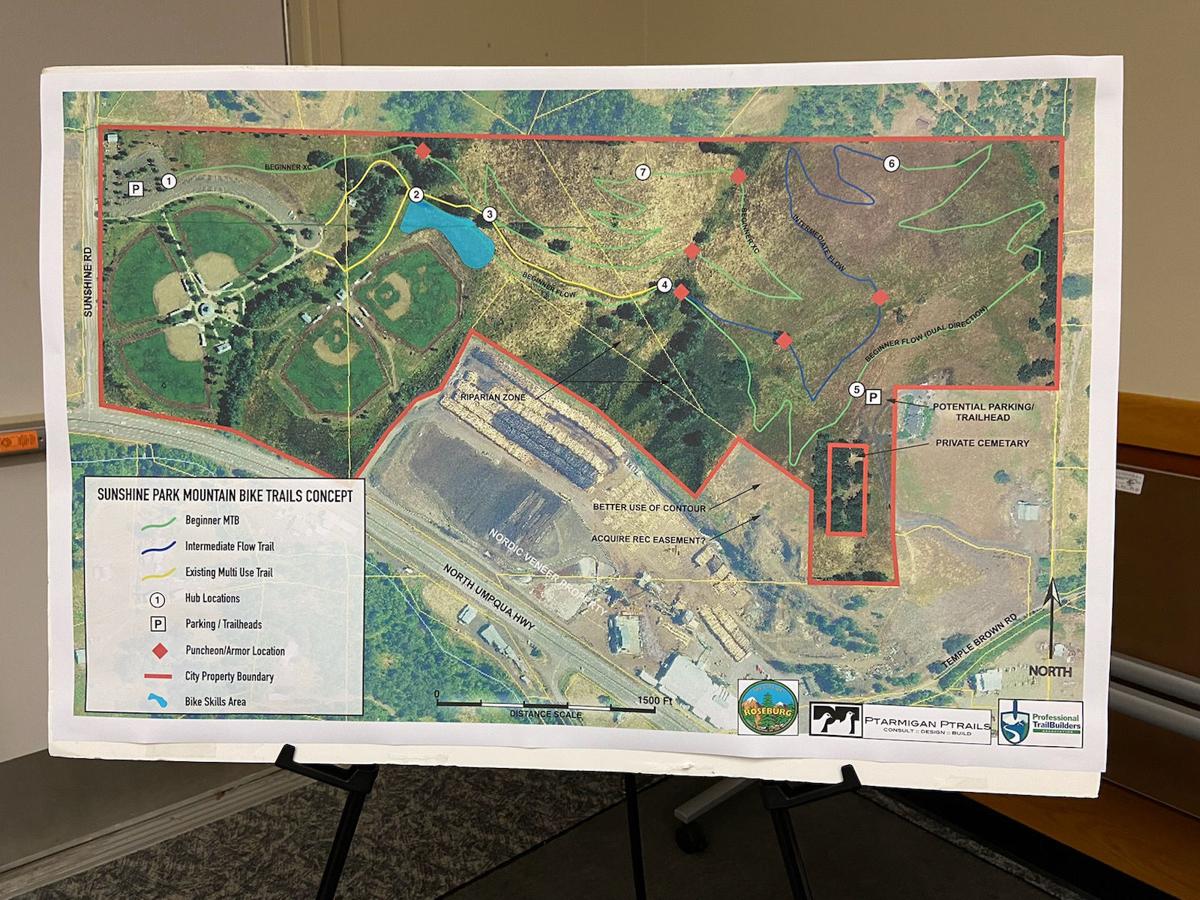 Plans for mountain bike trails at Sunshine Park were on display at a public meeting Wednesday. 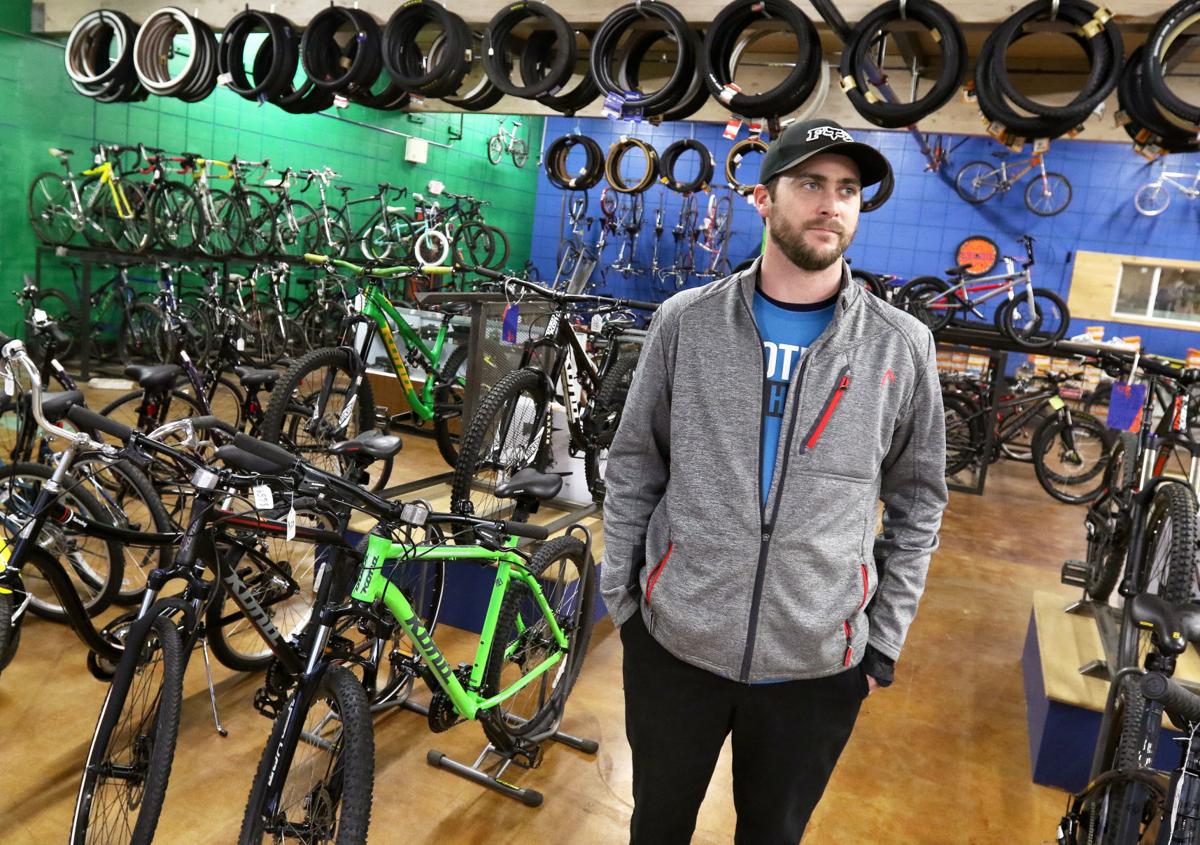 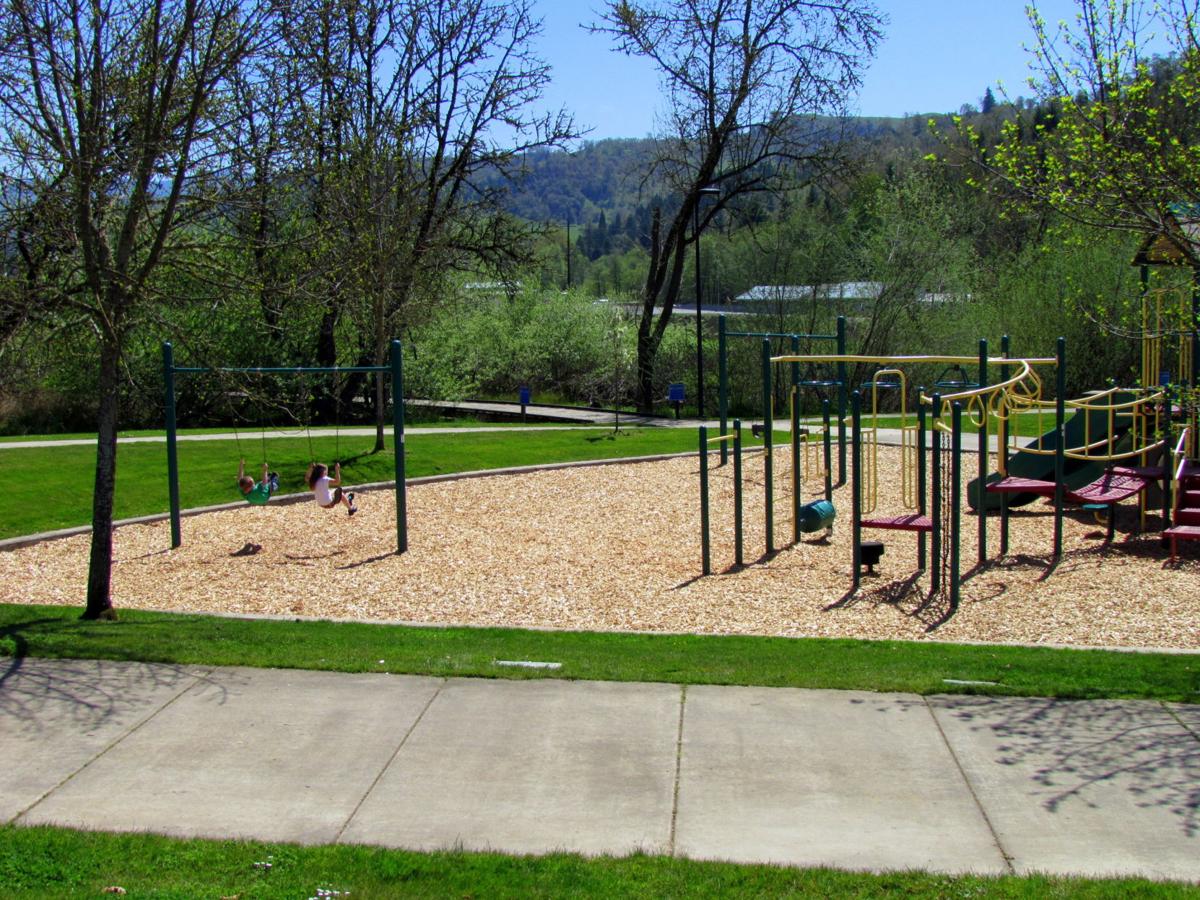 The City of Roseburg is planning to build a trail system at Sunshine Park, which is located just a few miles east of Roseburg on Highway 138.

Scott Hood of North Bend competes in the N.U.T.cracker mountain bike race in the Umpqua National Forest east of Idleyld Park on Saturday.

Sunshine Park east of downtown Roseburg may be home to mountain bike trails.

Plans for mountain bike trails at Sunshine Park were on display at a public meeting Wednesday.

The City of Roseburg is planning to build a trail system at Sunshine Park, which is located just a few miles east of Roseburg on Highway 138.

People here love their parks, even, apparently, ones that haven’t even been built yet.

It is those future parks, which are often just a set of plans and hopes for potential funding sources, that require public input and support to get off the ground and become a reality.

A proposed set of hiking and mountain bike trails slated for 40 acres within Sunshine Park is such an endeavor, and the public support for it was evident Wednesday evening when more than 50 area residents showed up at the Roseburg Public Library to discuss the proposal.

The discussion was led by Kris Ammerman, Roseburg Parks and Recreation program manager, and Eddie Kessler, with the trail construction firm Ptarmigan Ptrails, who has been hired as a consultant on the project.

The 90-acre Sunshine Park, built in 2001, is located about 5 miles east of Roseburg off Diamond Lake Boulevard. It has two baseball fields, three softball fields, two picnic pavilions and a playground. The trail system is planned for about 40 undeveloped acres, much of it hilly, at the park.

Initial plans for the park included a trail system, but it was never built, Ammerman said. He also said many of the boxes needed to construct the trail system have been checked off, and now what is needed is public feedback to help guide the project.

“We could put 4, 5, 6 miles of trails in there but you’d have a loss of the experience,” he said. “You don’t want that kind of high use density.”

Kessler also said that based on his experience building other such parks, providing a space for mountain bike riders, especially children and teenagers, provides benefits to the community on a variety of levels.

“It helps them care about where they live,” Kessler said. “Think about the long term and how a park like this can be an asset for the community.”

There are some potential hurdles that will need to be addressed before the trails can be built, Ammerman and Kessler said.

Parking could be an issue, especially on summer weekends, when Sunshine Park is filled with baseball and softball players, several residents said. There is a private cemetery in the park that is close to a proposed bike trail, and that, along with any other potential historically significant items that may be discovered, will have to be dealt with, Ammerman said.

“If we find an arrowhead then that’s going to drive the cost up,” Ammerman said.

He also said the proposed trail system does not have an estimated price tag attached to it yet, in large part because the cost will be determined by the trail system installed.

Both Ammerman and Kessler said state and federal funding is available for such a trail system, and that Roseburg is well-positioned to get some of it.

“One good for Roseburg is you guys don’t have any trails in town,” Kessler said. “You guys are in a good position to get funding.”

Even if all the pieces fall into place, the earliest the trail system could be expected to open is the spring or summer of 2021, Ammerman said.

He also said no other sites are being considered for a mountain bike trail system.

“As far as trails go, this is the only hanging fruit,” he said.

That’s OK for the dozens of mountain bike enthusiasts who attended the public forum, judging by their comments.

Bob Feiler, president of LUMBR, said he was generally pleased with the proposal at hand.

“This is such a small area, it isn’t going to be perfect for everybody,” Feiler said. “But it’s going to be way better than what we have now, which is nothing.”

Colin Drake, owner of Canyon Creek Bicycles in Roseburg, also supports the proposal for the new trail system. Drake said after the meeting that mountain bikes are becoming increasingly more popular, while road bikes are decreasing in sales.

A new trail system in town — something currently missing in Roseburg — would benefit local riders and also bring mountain bike enthusiasts to the area, Drake said.

“Owning a bike shop, this is obviously something that’s going to benefit me down the road, but it’s also going to benefit the community,” he said. “People are wanting to get off the road. This is not the biggest park, but it’s a start. We’re moving in the right direction.”

Ammerman also broached the idea of a so-called pump track, or a small area of mildly hilly terrain designed to help younger children learn how to ride mountain bikes. The idea was enthusiastically endorsed by those in attendance.

Heating up in the Umpqua Valley, but not for long

One dies in helicopter crash south of Roseburg