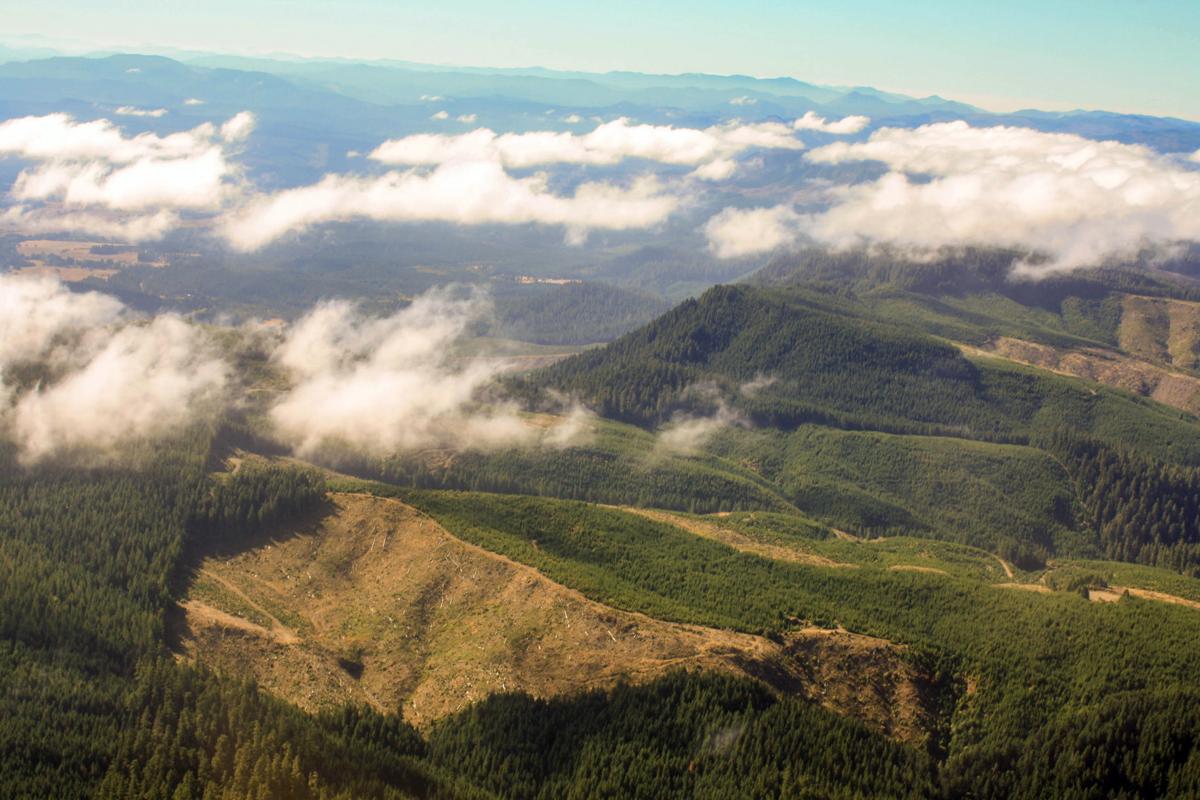 A view from the air shows the proposed route for the Pacific Connector Gas Pipeline during a flyover in September. 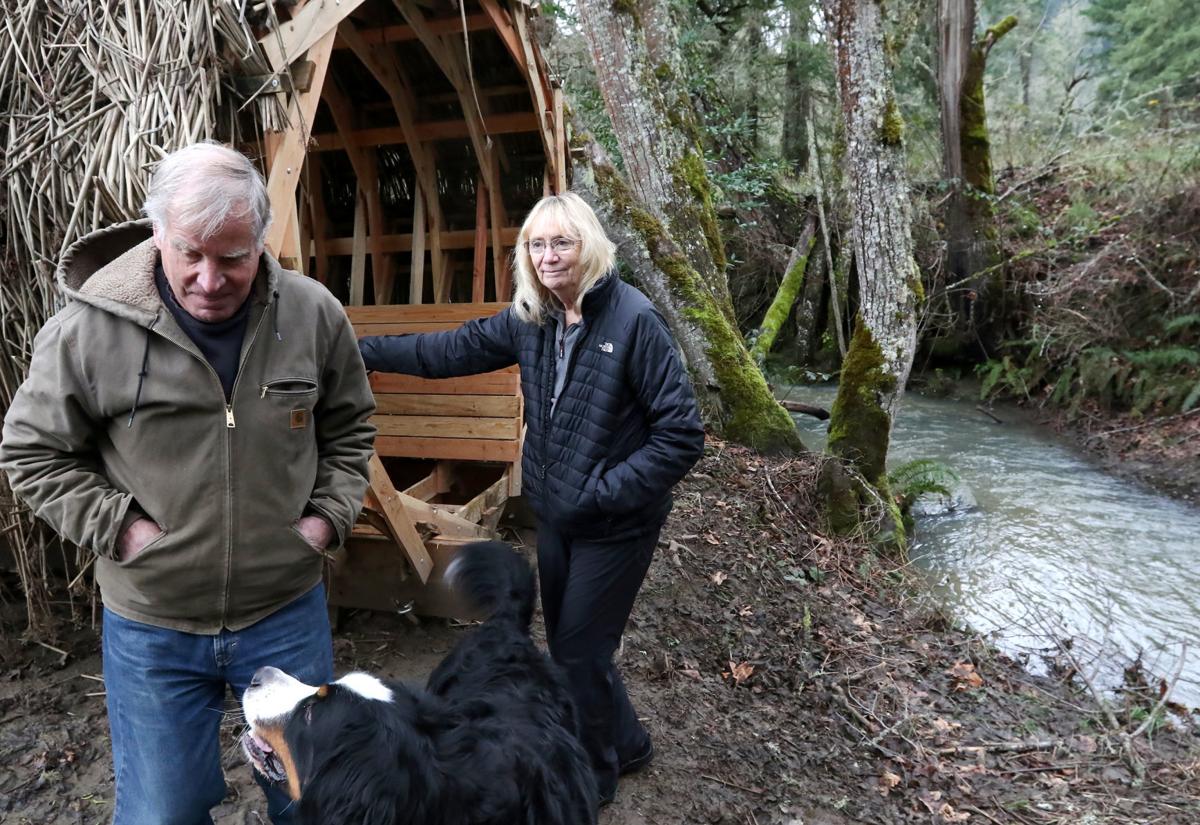 Sandy Lyon stands with her husband Russ Lyon and their dog Wally near a pipeline shaped pavilion constructed by a team directed by University of Oregon Director of the School of Architecture and Environment, Erin Moore, at their home in Days Creek in January. 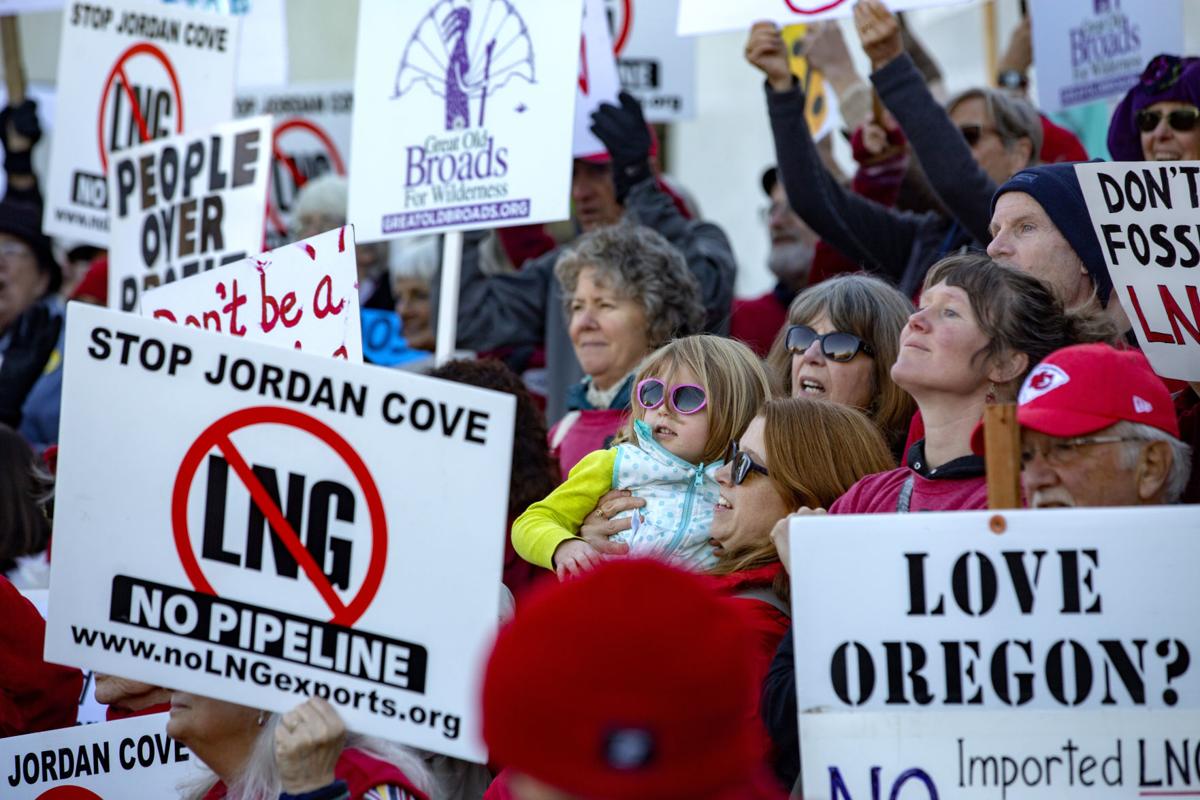 A view from the air shows the proposed route for the Pacific Connector Gas Pipeline during a flyover in September.

Sandy Lyon stands with her husband Russ Lyon and their dog Wally near a pipeline shaped pavilion constructed by a team directed by University of Oregon Director of the School of Architecture and Environment, Erin Moore, at their home in Days Creek in January.

One of the commissioners said FERC needs to review Oregon state permit denials before making a decision, while another said that the project was not in the public interest, according to press releases from the Western Environmental Law Center and Rogue Climate, which oppose the project.

It’s a delay, rather than a final decision, and Myrtle Creek landowner Stacey McLaughlin said in an interview this morning she has mixed feelings about that.

“We are encouraged they are taking a deeper look and aren’t just glossing over it and are doing their due diligence,” McLaughlin said.

“This project has been hanging over our heads and threatening our home with eminent domain for over 15 years,” Lyon said in a press release. “FERC should follow the lead of Oregon and deny Jordan Cove LNG for good. Our communities have made it clear and we deserve an end to this project.”

Canadian developer Pembina wants to build a pipeline that would travel 229 miles across four counties, including Douglas, en route to a proposed Jordan Cove liquefaction plant in Coos Bay. Along the way, if FERC ultimately approves the project, it could be forced by eminent domain across the properties of 90 landowners like Lyon and McLaughlin who have refused to sign agreements with the company. From Jordan Cove, it would be loaded on ships for export to Asian markets.

The company and its supporters argue the project would provide jobs, including temporary jobs for the pipeline’s builders and permanent jobs at the Coos Bay plant. Opponents — an eclectic blend of landowners and environmentalists concerned about climate change and harm to waterways — dispute the company’s assertions that a significant number of jobs would be created.

FERC had previously rejected the project in a 2016 decision, citing the harm to landowners in the pipeline’s path. The committee had said the company had not shown sufficient markets for the gas to justify the use of eminent domain.

At the time, another Canadian developer, Veresen, owned the project. Veresen re-filed for FERC approval in 2017.

Oregon has denied three permits for the project. Most recently, on Wednesday night the Department of Land Conservation and Development determined the project would harm Oregon’s coastal scenery and endangered and threatened species, along with its commercial and recreational fishing and commercial shipping.

DLCD reviewed whether the project was consistent with the Oregon Coastal Management Program, and decided it wasn’t.

“DLCD has determined that the coastal adverse effects from the project will be significant and undermine the vision set forth by the OCMP and its enforceable policies,” the decision said.

If FERC did approve the project, the U.S. Secretary of Commerce would still have to override the DLCD decision.

About 40,000 people sent comments to FERC opposing the project.

“Tens of thousands of people across the region have spoken out against this Jordan Cove LNG for over a decade. The State of Oregon has listened to our concerns and so should FERC,” said Rogue Climate Campaigns Director Allie Rosenbluth in a press release. “It’s time to put an end to Jordan Cove LNG for good this time so our communities can focus on creating local jobs in clean energy instead.”

"We watched with interest the Commission’s actions at today’s meeting," Vogel said in an email Thursday afternoon. "We also just received Oregon Department of Land Conservation and Development's (DLCD) letter late last night and like the FERC, we are taking our time to review it now. We respect the Commissioner’s thoughtful consideration and look forward to their final decision at their next opportunity."